Sergey Karjakin defied the odds to survive another 6.5 hours and 94 moves of torture at the hands of Magnus Carlsen, constructing a saving fortress just when it seemed the World Champion would finally take the lead in the match. It was a “mystifying” day, to use Peter Svidler’s word, as first Sergey and then Magnus committed a single glaring error each that transformed the course of the encounter. Relive the action with video recaps and more.

Magnus failing to convert chances is something neither we nor he are used to | photo: Vladimir Barsky, Russian Chess Federation

Let’s start at the end, with two tweets that summed up Game 4 of the 2016 FIDE World Championship match:

When Sergey was asked how he was feeling after once more coming back from the dead he answered simply “fantastic!”, while Magnus, who was clearly feeling very far from fantastic, still found a positive to accentuate: “I really believe it’s better to be attacking than defending”.

So how did Sergey Karjakin, playing with the white pieces, end up on the defensive? Well, his Anti-Marshall seemed to be going just fine until he reached what Svidler described as “a fork in the road” after 17…Nc4. That moment was captured for posterity:

Yes, that’s Magnus stretched out on the couch while Sergey is locked in thought!

18.Ng4 offered a solid position in which White would be no worse, but Sergey  thought he’d spotted a brilliancy and played 18.Bxh6!?

The move itself was fine, but Karjakin had overlooked Carlsen’s response:

Spooked by missing an obvious reply, Sergey went on to commit what the world’s watching grandmasters all unanimously flagged as a grave positional mistake – 19.Bxc4?, freely giving up White’s light-squared bishop and leaving the b2-pawn terminally weak. Eric Hansen’s reaction said it all:

Or if you prefer words:

From then on it was just an exercise in damage limitation for White, but when your opponent is Magnus Carlsen and the damage is so obvious the likelihood of a successful outcome was slim. For a long time the assessment of White’s predicament remained “sad” and it was a grim task for Sergey:

He stuck to it, though, and on move 45 Magnus was surprisingly the first to crack:

Sergey said afterwards that he saw no hope after 45…Be6, but Magnus closed the structure with 45…f4?!, only to later realise that he’d thrown away his win.

He commented on why he’d allowed what turned out to be a fortress:

In general I’m not a very big believer in fortresses in chess. There are people like Anand, who tries to build a fortress every time he’s worse, but I have experience in breaking these fortresses down. I just thought I was easily winning with 45…f4. As long as I have a path on the queenside it has to be winning – I didn’t even think about whether it’s still a fortress if I get the king to b3. That was very, very sloppy. Kudos to him for finding this, but I think that was just a very weak moment.

After 46.Bd4! it turned out there was no way for Black to break through into White’s camp on either side of the board, although the king went on a journey to a2 and back again.

The remaining couple of hours were low on drama but very high in frustration:

After 94 moves Sergey had escaped again! 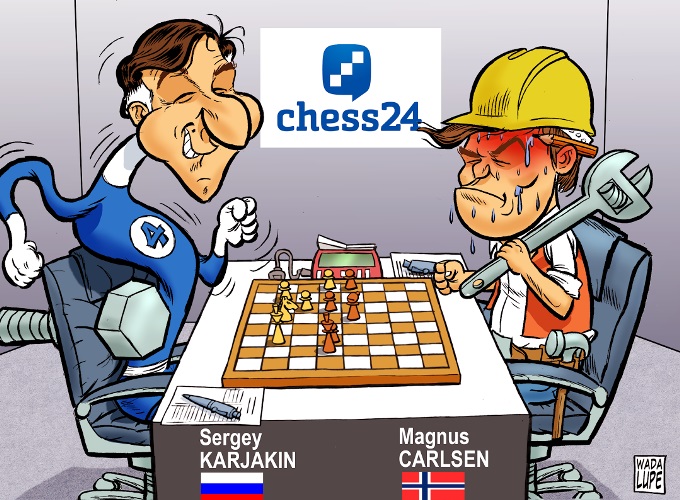 For a full account of a very interesting encounter check out our recap videos. Here's Niclas Huschenbeth:

If you missed it you may want to catch up with the full seven hours of commentary from Peter and Eric Hansen:

So going into the second rest day Sergey Karjakin has increased his rating by four points by holding the World Champion and world no. 1 to four draws. Only eight games now remain before we head to tiebreaks:

Tune in at 2pm EST (8pm CET) on Thursday for more commentary by Peter and Eric. Magnus will have the white pieces are let's hope for a game as enthralling as the last two encounters! You can also follow the action in our free mobile apps: