Magnus Carlsen came within an inch of beating Sergey Karjakin in what our commentator Peter Svidler described as “an epic game”. What developed into a 7-hour thriller started with a Berlin Defence where it seemed the only talking point would be a puzzling rook shuffle in the opening. A couple of inaccuracies, though, and Magnus was scenting blood. You had the feeling almost anyone else in world chess would have gone down without a fight, but Karjakin clung on for dear life and got the draw his bravery deserved – even if he needed some help from his opponent!

This was the day the 2016 World Chess Championship match began in earnest, with both players coming close enough to taste victory and defeat. It left them visibly shell-shocked, with neither certain if Magnus had ever had a clear win within his grasp (our silicon friends answer in the affirmative). 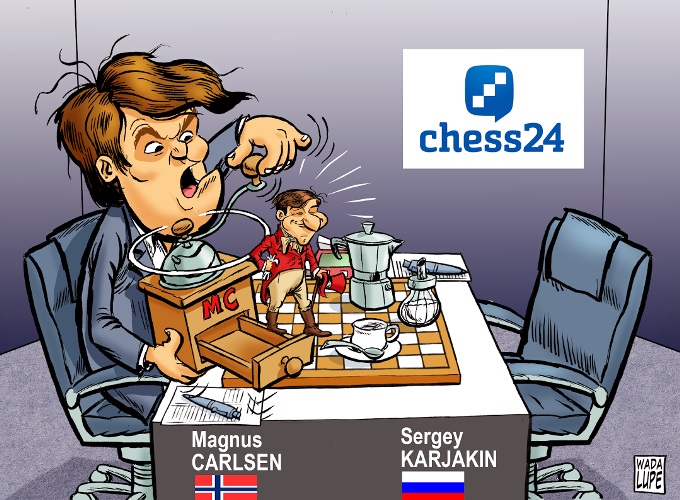 For once the Carlsen grind didn't work!

It was a remarkable journey from a game which started with a 5.Re1 Berlin that failed to set the pulses racing:

Eyebrows were at least raised by Carlsen’s retreat 10.Re2:

The move, of course, looks a little ridiculous, but it turned out what was much stranger was that Sergey and his team had apparently overlooked a move that had been played by players as familiar as Igor Kovalenko, Rustam Kasimdzhanov and Paco Vallejo, with the latter tweeting the lapidary:

Karjakin thought the move had been played in other positions, but not this one, and spent a full 25 minutes before coming up with 10…b6, looking to capitalise with 11…Ba6. Magnus repeated Kasimdzhanov’s 11.Re1, which led to one of the funniest moments of the post-game press conference. When Anastasia Karlovich asked if 10.Re2 had been a slip Magnus decided to roll with it and drew laughter with:

Yeah, it slipped out of my hand, so I moved it back to e1 the next move!

Despite all the time taken Sergey seemed, yet again, to go on to solve all his problems, until 25.f4 suddenly left him unhappy with his position. Things began to go wrong after that:

You'd think this would long since have stopped surprising us with Magnus!

Svidler, however, raised a note of caution with words that would, eventually, prove prophetic:

Against anyone else I'd say we're in Carlsen Country - in the 5th or 6th hour of the game, but Sergey is very good at long games.

When Magnus did seize the advantage his conversion perhaps wasn’t as crisp as we’re used to, with fellow grandmaster Teimour Radjabov tweeting:

Perfect or not, though, Carlsen got close enough that the computers were counting down to mate before the win finally slipped away. Svidler suggested the normal plan of action for Carlsen would be to take the draw and then “go into some room where no-one can hear you and scream into the void!”

Initially, at least, the players weren’t sure of exactly what had just occurred:

The post-game press conference questions didn’t leave the players much room for doubt, though:

Check out the game in detail with a recap by Niclas Huschenbeth:

Also don’t miss at least some of the commentary by Peter Svidler and Eric, including the moment they collapse in hysterics when someone in the chat describes Eric as a hybrid of James Bond and Toblerone – you probably had to be there

Let’s give world no. 2 Fabiano Caruana the last word!

So a quarter of the match has already gone by and the players are still locked together:

Tune in at 2pm EST (8pm CET) on Tuesday for more commentary by Peter and Eric as Karjakin gets his second shot at the white pieces. You can also follow the games in our free mobile apps: