A 34-move draw in Game 11 means Magnus Carlsen and Sergey Karjakin are tied at 5.5:5.5 as the 2016 World Chess Championship goes down to the wire in Monday’s final classical game. Magnus will be White after holding a comfortable draw with the black pieces on Saturday and even briefly seizing the initiative. The World Champion said the match is “trending in a good direction” for him, though Sergey noted that while before it was 80% chess it’s now 80% psychology. It remains to be seen whose nerves will stand up better.

The confident, relaxed Magnus Carlsen was back, but the World Championship match remains much too close to call! | photo: Vladimir Barsky, Russian Chess Federation

We went into Game 11 after three thrillers that had shaken up the match and seen both players come face to face with the spectre of both victory and defeat, with our video wizard Jose Huwaidi capturing the drama well:

When the dust had settled, though, we suddenly found ourselves back to square one. The match was level, Magnus had regained his confidence and we were starting out again. Neither player could relax with only two classical games ahead of them – that classic Chess World Cup scenario – but on the other hand, there was no longer any need to go for broke.

After the game both players said they hadn't watched Peter Svidler’s video series, though Magnus at least had the decency to apologise for that omission:


I’m sorry, Peter! I’m a big fan of his work in general, but no… I don’t think he’ll be too disappointed.

The reason the question was in the air was that after Game 9, in which the players followed a line from Svidler’s Archangels for 23 moves, the focus in Game 11 switched back to The 6.d3 Spanish according to Svidler. With 9…Be6 Carlsen deviated from his play in Game 2, and then up to 13…fxe6 the biggest games in the line had been played by Peter himself. Paths diverged on move 14, where Dominguez and Anand had played 14.a4 against Svidler, while the move Peter recommended in his series was 14.Qg4: 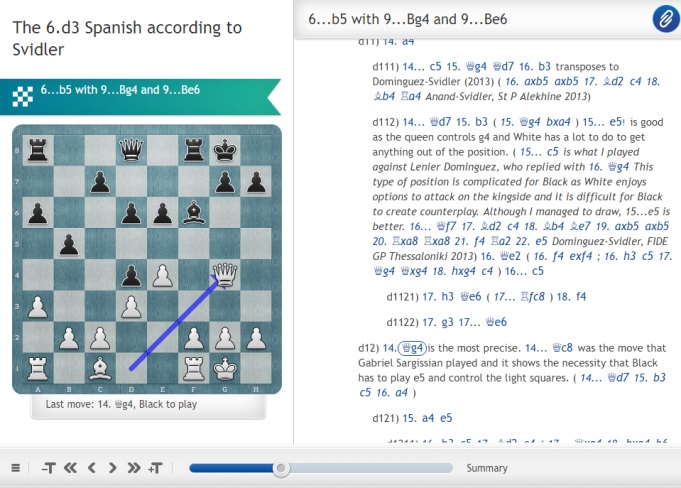 Peter explained he stopped playing this line because, “I didn’t like giving White all this pressure”, and the position was much less innocuous than it seemed. Karjakin, though, went for 14.f4 instead, and then for the next half dozen moves we got a game of cat and mouse. There was the looming threat of simplifications and a quick draw, but neither player seemed in a hurry to get there.

The meant a lull in the proceedings, which was filled by some curious moments:

The FIDE President, the Women’s World Champion and two former World Champions were all watching what some might term a "pirate" broadcast from a bar in Bucharest (or maybe Medias, where Hou Yifan and Kramnik play a match on Monday):

A World Championship Challenger was as puzzled as the rest of us:

In the chess24 chat Laurent Fressinet, who apparently is again a Magnus Carlsen second, commented, “it’s still equal, but Black will be better”. We saw the kind of thing he meant when Magnus didn’t make an “automatic” pawn recapture but played the surprising 19…d5!

This was the old Magnus rustling up something from nothing, and he commented later, “I thought I had the initiative, for sure”. Sergey was also worried, but not enough to panic. He followed his approach from earlier in the match and instead of picking up a risky pawn steered the game towards safety:


I’m not impressed with how I played today, but at least probably I found one good move, 20.Bg5, because maybe if I don’t play it it’s already dangerous for me.

That move seemed likely to lead to a quick draw, but Magnus had another minor surprise in store when he put his trust in a powerful passed e-pawn. Anish Giri knows how Magnus’ mind works:

In the end, though, no dramatic consequences ensued, with Sergey able to stem any bleeding, much as Nigel's "barbarian" assistant had in Munich:

The players stopped on move 34 with perpetual check on the board, and all in all it was a well-played game of the kind that we saw at the very start of the match. It was all good. 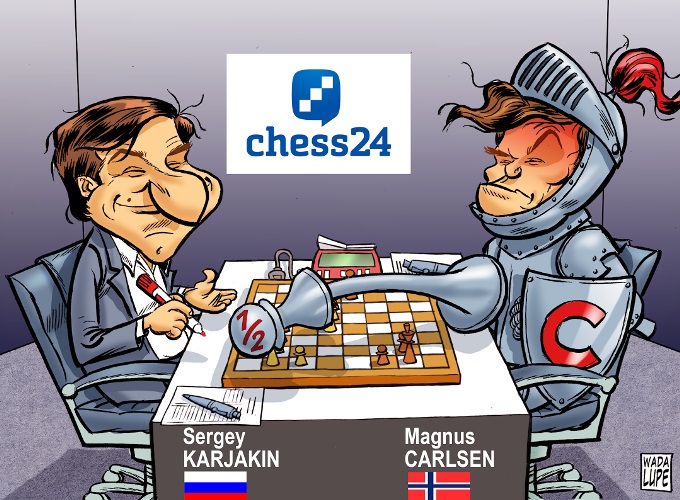 Luckily, for a proper account of the game we have our very own Ruy Lopez expert Peter Svidler:

And once again you can replay all the commentary from Jan and Peter:

We’ve already quoted from the post-game press conference, where the theme was that Magnus had his mojo back:

The match is trending in a good direction for me. Today I have to say I was much calmer than in the last few games.

The World Champion also gave a nice answer to the most hackneyed question in chess – whether the game is a sport, a science or an art:

I think chess in this form is definitely a sport more than anything else. Of course the work done at home has something to do with science, but I’m afraid to find art you have to go elsewhere, since it becomes mostly about getting the right result.

There was the kind of press attention that Sergey first experienced on winning the Candidates Tournament in March | photo: Vladimir Barsky, Russian Chess Federation

Sergey wasn’t exactly exuding confidence and may have been overly negative about the positions he had on the board, but he was saying sensible things when asked about the challenge ahead:

I have no idea how the game will go, but I just want to try to show my best chess and then we’ll see.

In short, we were back to the balance of power we had at the start of the match… and remember how that went!

So then, we have the final classical game on Monday, when Magnus will have the white pieces. The fans can't wait!

If the game ends in a draw then they play tiebreaks on Wednesday - Carlsen’s 26th birthday! It's time to check the format:


Needless to say, tune in on Monday for commentary from Peter Svidler and Jan Gustafsson! You can also watch the games in our free mobile apps: