Carlsen-Karjakin, Game 10: Magnus is back!

Magnus Carlsen has beaten Sergey Karjakin to level the score in the 2016 World Chess Championship with two games to go. The first half of Game 10 saw both players creaking under the pressure and could have ended abruptly if Sergey had spotted an all but forced draw. Instead, after more adventures, Magnus got the kind of slightly better endgame on which he’s built his chess empire. Sergey seemed to have constructed a fortress, but one moment’s inattention was all it took to see it all come crashing down. A hugely relieved Magnus Carlsen is now favourite again – but so are tiebreaks!

The smile is back, as the World Champion ends a sequence of 10 games without a win | photo: Vladimir Barsky, Russian Chess Federation

Vishy Anand’s second Grzegorz Gajewski knew what he was talking about when he commented:

The game was being played exactly 25 years after the death of Freddie Mercury, and it couldn’t have had a better theme song:

The players once again went for the Ruy Lopez, and this time Magnus met the Berlin with an offbeat variation of the Anti-Berlin. He was back at his old game of getting his opponent “out of book” at all costs, as Anish Giri explained:

The ploy may have been part bluff, but it seemed to be paying off when there was a brand new position after 10 moves and Karjakin began to burn up a huge amount of time on seemingly mundane decisions. Magnus had a nagging edge, but then he threw it all away by exchanging light-squared bishops. After 20.Nd2 we got the critical moment in the game and perhaps the whole 2016 World Championship:

On Thanksgiving it was Magnus who had a lot to give thanks for | photo: Vladimir Barsky, Russian Chess Federation

Instead Sergey quickly played 20…d5, which Ian Nepomniachtchi described as “one of the most shocking moves of the entire World Championship”. Paco Vallejo commented…

…though as some pointed out, that would disqualify both players!

The sequence that followed was very puzzling. On the next move Magnus again allowed a forced draw, though a much tougher one to see, while his move after that was also rushed. The sequence continued with 26.Rfe1, which was captured on video:

Did Magnus say j’adoube? In any case, if he was forced to accept touch-move consequences he could safely have played 26.f3. That wasn’t all that was odd about the move, though:

As our commentators spotted, 26…Raf8 would probably have forced an embarrassing U-turn from the World Champion, since the move he surely intended, 27.Re2, would run into 27…dxe4 28.dxe4 Nf4+! – again that fork on f4.

Chess fans were left bewildered by the way the game was developing:

From that point on, though, both players became their recognisable selves again. Magnus set about nursing an advantage in space and coordination, while Sergey hunkered down in resolute defence. It was time to change the soundtrack, since we were in for the long haul:

Some pundits such as Nigel Short declared the game for Carlsen early on, but despite the building pressure for a long time Karjakin held firm against the tests of his opponent:

His mistake, though, and it was one our commentary team also made, was to underestimate Magnus’ devilish plans. 55.Rd2-d3! looked like a nothing move, and later Sergey admitted:

When he played 56.Rb1 I thought that maybe Magnus wants to win some time to get to the time control [on move 60]. Somehow I didn’t get that he wants to play b5 now, and after this blunder I’m probably lost.

Computers confirmed that 56…Rhh7 was a losing move, while Karjakin’s own suggestion of 56…Nh6 would probably still have held. Magnus could unleash the break he’d been working towards:

From that moment on Magnus was technically winning, although the conversion wasn’t without some heart-stopping moments. The Norwegian himself admitting that it was only at the very end that he was sure he’d get his man.

It was Sergey’s turn to suffer: 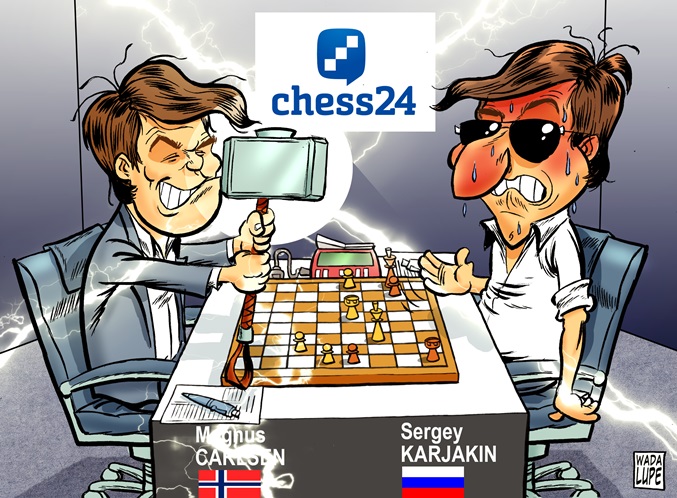 Finally Thor was back...

For a full in-depth account of the game check out Peter Svidler's 30-minute analysis of the game:

It's also possible to rewatch the whole show with Peter and Jan (what else are rest days for?

So finally Magnus had tamed his opponent:

His relief was immense, as he commented on the new situation:

Obviously it looks a whole lot different now. It wasn’t easy, but I managed to break him!

He later added in the press conference:

It’s a huge relief. I haven’t won in 10 games and that’s basically something that hasn’t happened to me. It’s been a struggle, and it’s still going to be a struggle, but at least now we’re fighting on level terms.

We now know the struggle will stretch to at least the full 12 games, and may also end in tiebreaks on Magnus’ birthday (Wednesday 30 November). He commented:

I’m just happy there will be two more games!

It was hugely to Karjakin’s credit that despite his obvious disappointment he played a full role in the press conference and post-game interviews.

Karjakin takes his seat at the press conference, while a round of applause rang our for his opponent | photo: Vladimir Barsky, Russian Chess Federation

When he was asked about the coming games he simply said:

I just want to play well, and not to blunder anything.

We all have a rest day to recover from that game, while our commentators also have a chance to recover from finding that the admiration is mutual between them and their favourite Canadian stand-up comedian:

So what now? Well, as if we didn’t before, we now definitely have a real match on our hands:

Of course neither player needs to play for a win at all costs in the remaining two games, but Magnus especially is probably hoping to avoid playoffs. Sergey, meanwhile, will have White in the next game, when his ability to bounce back will again be put to the test.

Tune in again at the same time on Saturday for commentary from Peter Svidler and Jan Gustafsson! You can also watch the games in our free mobile apps: