Sergey Karjakin kept his nerve in his first ever World Championship match game to hold Magnus Carlsen to a 42-move draw. It wasn’t easy! Magnus sprung a surprise with the Trompowsky on move 2, then managed the impressive feat of getting the all-knowing Karjakin “out of book” on move 6. As so often against Magnus, Sergey solved his initial problems but then found himself slipping into the slow torture of a position he could only draw or lose. He didn’t crack, though, and is off the mark in New York – only 11 games to go!

The first game in a World Championship match is special, drawing enormous interest from chess fans and marking a landmark moment in the careers of the players - especially for a first-time challenger. It’s been a long road to get to where Carlsen and Karjakin are today, with the latter actually making the faster start:

In New York, after the previous day’s press conference, there was just one formality to complete – the drawing of colours, which took place in the Plaza Hotel on 5th Avenue:

So Magnus would have the chance to assert himself from the off! First he enlisted the help of a movie star to play 1.d4:

Then he met 1…Nf6 with 2.Bg5, confounding most of the pre-match speculation on how he’d start the game. Why had he picked the Trompowsky, an opening with a sometimes less than stellar reputation? Well, we’d like to think it was…

…but it can’t be ruled out that a certain politician was somehow behind it:

Magnus went on to claim that his second favourite Donald was “a little bit” behind it, though later perhaps he regretted both that answer and his choice: 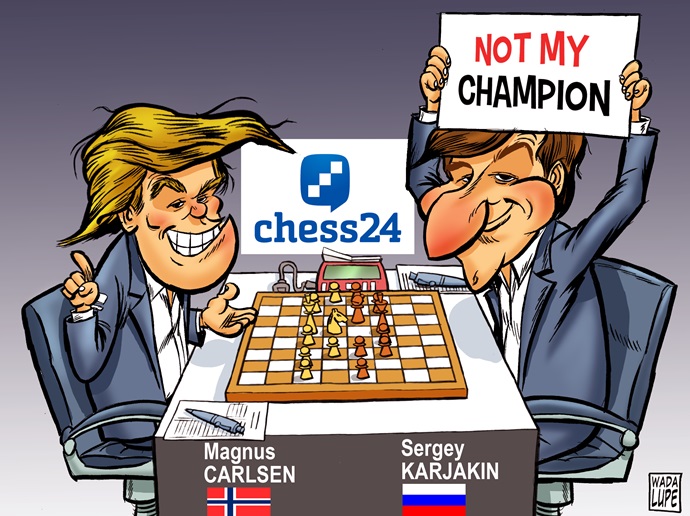 It wasn’t quite Trump’s approach to a problem, though, with the subtle 20.g3 bamboozling and impressing the watching chess world in equal measures.

It turned out endgame wizard Ulf Andersson had once won a minor masterpiece in a very similar ending, but Magnus couldn’t quite pull it off, as Robin van Kampen explains!

Robin and his partner in crime Eric Hansen commentated on all four hours of the day’s action:

So it was a mildly disappointing opening for Magnus Carlsen.

I keep on punching the guy but he just won't topple over... | photo: Vladimir Barsky, Russian Chess Federation

There was someone else who was more than mildly disappointed with what he'd seen, though this guy is pretty hard to impress...

If Karjakin dodged a bullet in that game we can expect to see him unleashing some ammunition of his own when he has the white pieces for Saturday’s Game 2. What will he and his team have cooked up for the world’s no. 1? Tune in at 2pm EST (8pm CET) on Saturday to find out!