The line-up for the 2016 Grand Chess Tour has been announced. Although Magnus Carlsen will miss the Sinquefield Cup and London Chess Classic he plays in the rapid and blitz tournaments in Paris and Brussels this June. Sergey Karjakin is the only player in the current FIDE Top 10 not taking any part in the tournament, with Malcolm Pein revealing the Candidates Tournament winner wasn’t invited.  The total prize fund is just over $1 million. 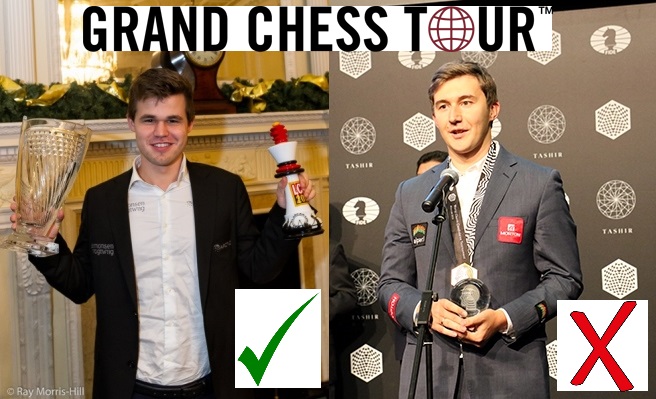 The Grand Chess Tour was dealt a blow earlier this year by Norway Chess quitting the series, but they’ve weathered the storm, announced two new rapid and blitz tournament replacements, and now a line-up that’s about as good as it could possibly be. Nine of the players in the Top 10 on the January 2016 FIDE rating list have agreed to play in all four tournaments:

The one missing name from that list is of course World Champion Magnus Carlsen, who decided not to play in the classical tournaments either side of his World Championship defence, but will compete in the two events in Paris and Brussels. 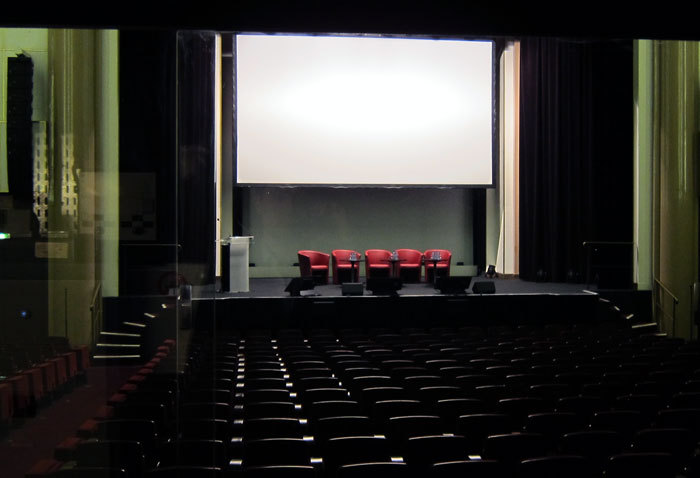 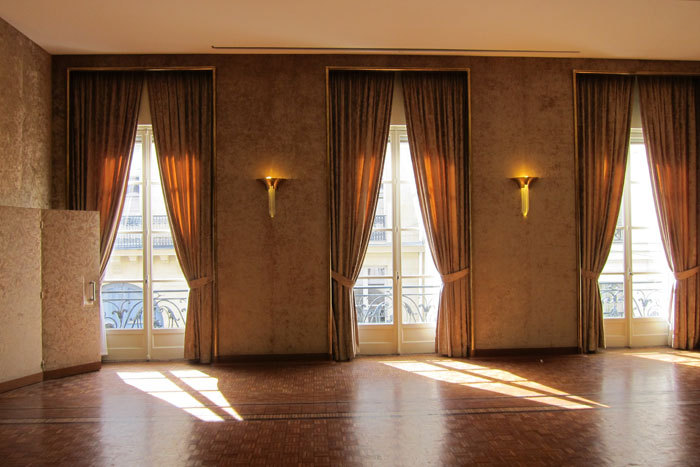 It's great news that the Grand Chess Tour have expanded with two new tournaments in Paris and Brussels. I'm looking forward to playing both. Unfortunately, due to a very busy schedule, I won't be able to play in Saint Louis or London this year. Hopefully I will get a new chance to fight for the GCT title again next year.

The events, and prizes on offer, are as follows:

Each tournament can pick one wild card. The London organisers haven’t yet decided, St. Louis have picked Chinese no. 1 Ding Liren, while Brussels and Paris chose Magnus Carlsen – though Paris appear to have added Laurent Fressinet as well. There's also one wild card for the Tour as a whole, and though not announced that seems to have been given to the French no. 1.

Maxime was the hard-luck story of the 2015 Grand Chess Tour. Due to the curious regulations in place he managed to make it to the final two of the London Chess Classic playoff but finish that event third, meaning he failed to finish in the Top 3 of the series as a whole.

That meant no automatic qualification, and on the average rating for 2015 he would be below Alexander Grischuk, Ding Liren and Sergey Karjakin among those who aren’t playing in all four events. It may have helped Maxime's case that he has been personally sponsored since 2009 by Colliers International France, who are sponsoring the tournament in Paris. 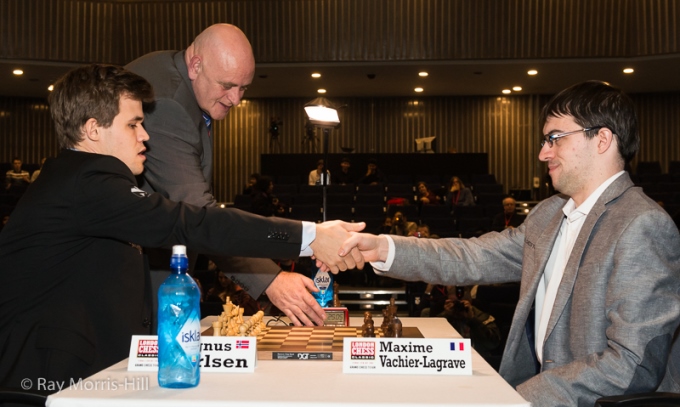 Maxime lost the London playoff to Magnus, but it all worked out in the end! | photo: Ray Morris-Hill

As mentioned above, Alexander Grischuk is one player who might have been invited to the Tour, but it’s of course another player who stands out...

On the latest FIDE rating list for April it's almost symbolic that the only player missing from the Tour completely is Karjakin, who moved up to number 8 after his Candidates Tournament success.

He didn’t qualify automatically, but there’s an unmistakeable element of déjà vu – since once again, on the rating used for qualification, he was above Maxime Vachier-Lagrave.

In 2015 Karjakin didn’t qualify automatically on the January 2015 rating list, but was above Maxime on that and had every right to feel aggrieved when, as the reigning champion of one of the tournaments, he was overlooked on the basis of later rating lists. This time around, if a final decision was taken in recent days, Karjakin’s status as Carlsen’s challenger might have made him an enticing prospect, but it seems he wasn’t invited.

Of course, given Karjakin’s withdrawal from the Norway Chess supertournament he might have turned down invitations to take part in the Grand Chess Tour as well. With preparation for a World Championship match the priority, Sergey seems keen to cut his appearances to a minimum. His manager Kirill Zangalis told R-Sport:

Based on the preparation schedule for the World Championship match in the USA, Sergey Karjakin will take part in three international events. The first of them will be the Memorial for Vugar Gashimov, who Sergey was very close to. That event takes play in May-June in Shamkir (Azerbaijan). Then Karjakin will play in the Russia-China match in June in Moscow and at the World Chess Olympiad in Baku in September.

Since Magnus isn’t playing in Shamkir that means the only chance of a Carlsen-Karjakin dress rehearsal would be if they met on top board at the Olympiad - a long shot! Before that, though, we'll have the Grand Chess Tour events starting in June, with chess24 set to be heavily involved with providing a top-quality broadcast.