Carlsen: “I’ll punch him until he finally knocks over”

World Champion Magnus Carlsen was in good form at the opening press conference of the 2016 FIDE World Chess Championship in the Fulton Market Building in New York. He talked up Sergey Karjakin’s resilience in defence, only to express the desire to knock him down, and answered a question on the best player in the world: “If I may be so bold, I would say myself!” Karjakin had some good lines of his own, though, as they prepare to face off tomorrow in Game 1 of the match. 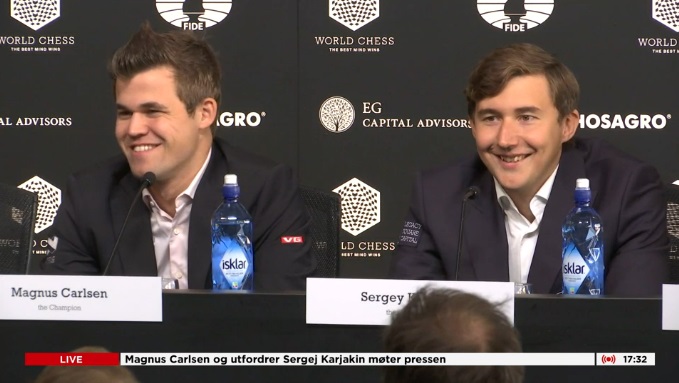 Both players enjoyed the question on anti-hacking measures! | all screenshots: VGTV.no

The press conference was broadcast live on the internet by Norway’s VG TV:

The seven participants spoke first in the order in which they were seated: FIDE VP Israel Gelfer, Agon CEO Ilya Merenzon, Phosagro CEO Andrey Guryev, EG Capital Advisors’ Michael Stanton (both representing sponsors), Magnus Carlsen, Sergey Karjakin and Chief Arbiter Takis Nikolopoulos. That meant we had to wait a while to get to the players, and there were some awkward moments. Gelfer became the second person at a press conference about the match to refer to the Kasparov-Karpov match in New York in 1990, which makes it seem that the 1995 Kasparov-Anand clash on the top of the World Trade Center is being airbrushed out of history as not an “official” FIDE match. 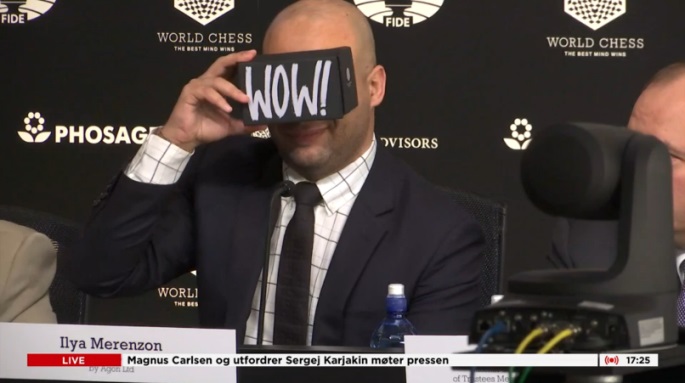 Agon CEO Ilya Merenzon called the match a "coming out party for chess", which will require glasses

Later Gelfer would respond sharply to a question from the BBC on the absence of FIDE President Kirsan Ilyumzhinov, Merenzon met an inaudible question on the relatively low match prize fund (about 1 million euros, compared to the 2.5-3 million we saw for the matches in Moscow and Chennai in 2012-3) with, “Are you able to provide the prize fund next time – are you willing?” But of course, we were there for the players, and in the end we got them. 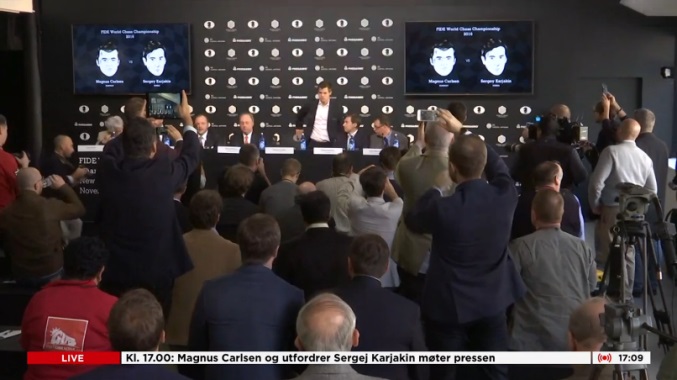 There were some funny moments, with Magnus memorably asked:

Carlsen ultimately gave both the diplomatic and the honest answer to that question, one after the other:

I think that’s going to be decided in the next couple of weeks… Right now, if I may be so bold, I would say myself.

Karjakin wasn’t disagreeing, as such, but he of course very much wants to take away his opponent’s crown. On the topic of Microsoft providing advice to Team Carlsen on preventing hacking Magnus said those stories hadn’t come from his team, while Sergey said his approach wasn’t quite so serious: “I just downloaded some anti-virus!”

The players were being cagey, as you would expect, about their seconds:

Karjakin: Vladimir Potkin and also Alexander Motylev, but of course I have some contacts in my Skype – Skype is helping me!

Carlsen: My coach Peter Heine Nielsen is here, well, not here, but in the city. Apart from that. Yeah, not going to say anything!

What Carlsen did say was that if his friend Ian Nepomniachtchi was now helping Karjakin he would have no problem with that.

The most substantial answer of the day was when Carlsen was asked about his opponent’s best quality:

Sergey is very well-prepared. He has studied the game very well, is very knowledgeable and, most of all, he’s extremely resilient in defence. He’s very, very good in finding resources even in difficult positions - finding positions he can defend. For me, it’s a matter of when I get the chance I’ll try to punch him until he finally knocks over! 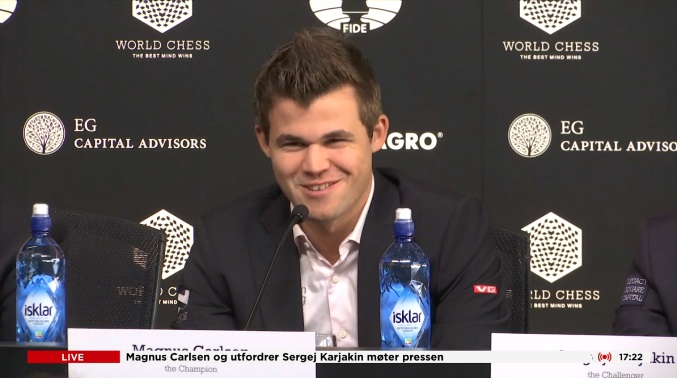 Carlsen flashed a huge smile as he refuted the claim that both players in the match were 26 - he still has a few weeks to go!

So then, the first move is just a day away. Was it keeping the players awake at night with chess dreams?

Karjakin: I think I have seen chess in my dreams quite often - maybe one time from 20 I have some chess. Of course it’s very important to guess the first move, but we’re all professionals and we have to be prepared against everything.

Carlsen: (to the suggestion he had “horror dreams” before matches in the past) That’s just in general, not before matches! What can I say? I’m anxious to start the match, to start playing, whatever the first move or the first few moves will be.

You can find more on the match on our special World Championship page and, god-willing, we’ll have commentary from Eric Hansen and Robert van Kampen (with the likes of Peter Svidler and Jan Gustafsson to follow) from Friday!