Magnus Carlsen hints his World Championship match against Ian Nepomniachtchi is his last, and says he is ready to give up his title unless Alireza Firouzja wins the Candidates. The 5-time World Champion has now set his eyes on an "impossible" target: breaking 2900 in rating. 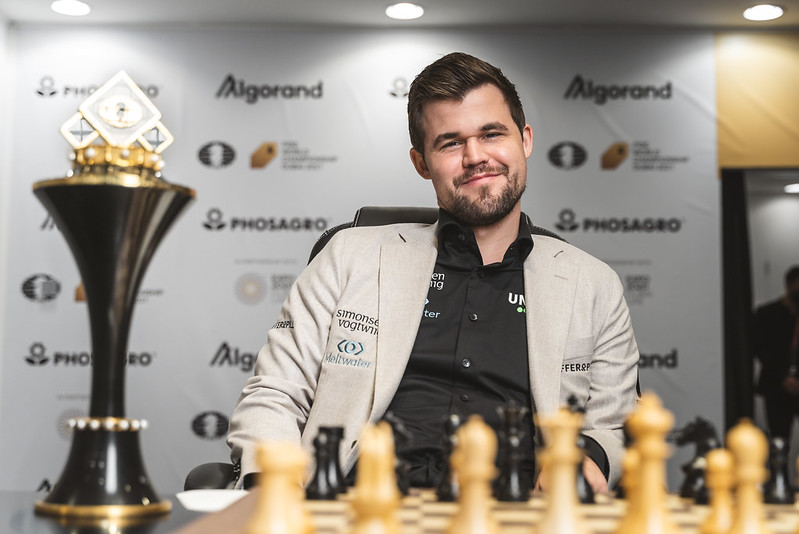 Magnus Carlsen made the shocking announcement about retiring from World Championship matches on a podcast for his sponsor Unibet | photo: Niki Riga / FIDE

The breaking news was revealed on the Løperekka podcast for his sponsor Unibet, hosted by his close friend Magnus Barstad. Norwegian newspaper VG was first to report on the announcement.

After defending his World Championship title for the 4th time, beating Ian Nepomniachtchi convincingly 7.5-3.5, the Norwegian hints that the match in Dubai is very likely his last.

For those who expect me to play the World Championship next time, the chance that they will be disappointed is very great.

The 31-year-old says that the only way he could be motivated for a sixth title match is if Alireza Firouzja is his opponent.

The Iranian-born French teenager has taken the chess world by storm over the last year, and at 18 years and 5 months broke Carlsen's record as the youngest ever 2800-rated player.

Carlsen says there was a particular incident that could motivate him to play one more match.

What happened during the Grand Swiss in Riga, where Alireza Firouzja won and qualified for the Candidates Tournament... made it realistic that I can meet him next time. It can be something that motivates me properly. It already helped me with the motivation for the World Championship match now.

The announcement does not come as a huge surprise, as Carlsen several times hinted he may not defend his title again. Before the 2014 World Championship, he was very close to giving up his title after being unhappy with how Sochi was selected as a host. His doubts on whether the enormous pressure was worth it continued before his 2018 match against Fabiano Caruana.

Even in Dubai he responded with a cryptic "we'll see" when asked if he plans to break Emanuel Lasker's record of winning six World Championship matches.

It’s been clear to me for most of the year that this World Championship should be the last. It doesn’t mean as much anymore as it once did.

I haven’t felt that the positive outweighs the negative.

However, Carlsen remains commited to continuing his incredible career, and says he has now set his target on a new goal: breaking the 2900 rating barrier for the first time.

If someone other than Firouzja wins the Candidates Tournament it’s unlikely I will play the next World Championship match. Then I think I want to say that I am happy. There is so much more I can try to do. I am very motivated to get the rating to 2900.

During his incredible run of winning six events in a row in 2019, going 125 games undefeated until Jan-Krzysztof Duda eventually stopped him in 2020, the impossible task looked possible again. His current record remains 2882 reached in 2014 and 2019, while 2889 on the live ratings is the unofficial record.

Currently rated at 2865, a massive 60 points ahead of world no. 2 Firouzja, Carlsen now thinks the target is within reach again.

I have never had it as a goal before, because I felt it was difficult. I have raised the rating a bit again now, to 2865, and it is at least a goal you can set. It does not feel completely impossible, but at the same time I know that I have to be at the top of my game every time I play. There is no room for error. It is something to motivate oneself for.

With 6 out of 8 spots for the next Candidates already decided (Nepomniachtchi, Duda, Karjakin, Firouzja, Caruana, Radjabov), and two players to be decided through the FIDE Grand Prix next spring, the event could take place next summer. Currently it seems likely the World Championship match will be scheduled for early 2023.

The question is: did we witness Magnus Carlsen's last World Championship, or will Alireza Firouzja qualify by winning the Candidates next year?

Regardless, Carlsen will get the chance to hold all three World Championship titles for the third time as the World Rapid and Blitz Championship begins in Warsaw, Poland on December 26th.