Magnus Carlsen burst out of the blocks to take a 1pt lead on the opening day of the Julius Baer Generation Cup, the star-studded seventh leg of the $1.6 million Meltwater Champions Chess Tour. 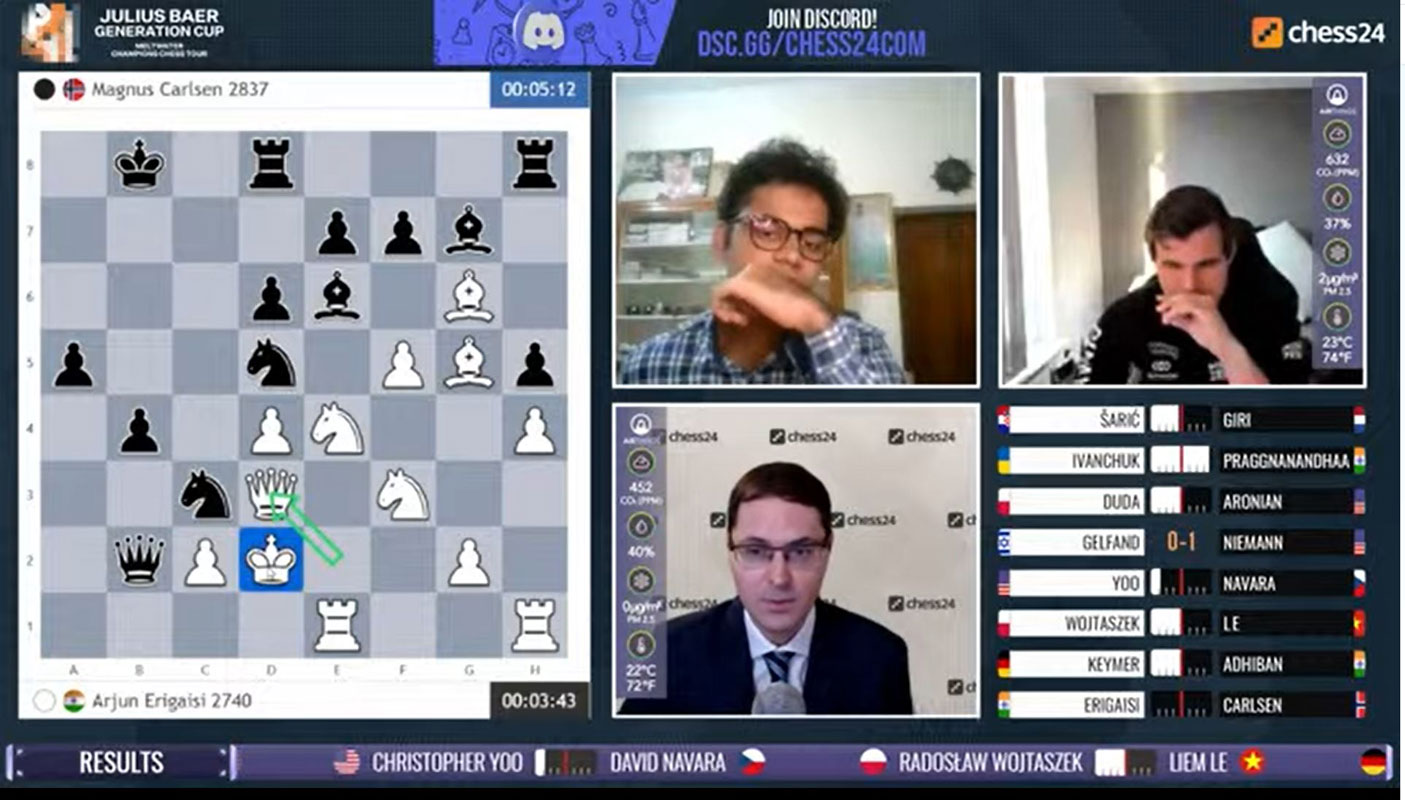 The World Champion racked up an unbeaten 10/12 pts with wins over Arjun Erigaisi, Adhiban Baskaran and Liem Quang Le, with only Dutch No.1 Anish Giri preventing him from taking the maximum number of points.

You can play through all games from the Julius Baer Generation Cup on our Broadcast page.

"He's really started on fire," Grandmaster David Howell said in the commentary box. "Normally, we're not used to seeing him this sharp in tournaments so soon. Normally, he steps up the gears as the days go on. Impressive stuff, scary for the rest of the field, maybe."

Behind the favourite are four players on 9pts including the controversial American Hans Niemann who, with Carlsen, has been at the centre of a furore in the chess world over the last two weeks.

But Niemann showed he wasn't going to let internet speculation get to him as he also had a strong day. Carlsen and Niemann are now set for a hotly-anticipated clash in Round 6 tomorrow.

It was Niemann who drew first blood in the tournament as the Meltwater Champions Chess Tour event got under way, by beating 53-year-old legend Boris Gelfand. Niemann went on to finish with an impressive three wins.

The legendary Israeli was in good spirits despite losing all his games.

"My main struggle was that I played horribly!" he said. "Hopefully I will play better next days," he added, expressing gratitude for being invited.

Meanwhile, an intriguing first-round game between 17-year-old Praggnanandhaa and 53-year-old chess legend Vasyl Ivanchuk ended with two dramatic blunders and an amazing swindle for the youngster.

Ivanchuk was dominating his teenage opponent and looked set to strike the first blow for the older generation, but tragically first dropped a rook and then left a bishop hanging in time trouble.

The Ukrainian quickly shook off the loss in the next round, however, with a stylish win over the Croatian Ivan Saric to pick up his first 3pts. Clearly, the former world no. 2 was just warming up.

In Round 3, Ivanchuk's famed genius shone through as the former world no. 2 left Giri stunned with the crushing 34. Bxf6+, which forced the Dutchman to resign instantly.

Then, Ivanchuk showed again he was still on top of his game with a Round 4 win over Poland's World Cup winner Jan-Krzysztof Duda. His performance will bring a cheer from fans of the older generation of players taking part in this event.

The Ukrainian then gave a lengthy interview, where he called for the end of the war.

The final player on 9/12 was Erigaisi, India's 19-year-old super-talent, who recovered from his opening round loss to Carlsen to score three wins. He beat Adhiban, Le and the Czech no. 1 David Navara.

The eight-day event runs from September 18 to 25 and features 16 world-class competitors spanning three generations of player.

Once the prelim is completed, the tournament will move to the knockouts before a two-day grand final.