Carlsen on why he is unlikely to play another title match

Magnus Carlsen says he is still “not 100 percent certain” he will give up his title, but reiterates that it's unlikely he will play another match, adding more details on the reasons. The World Champion remains commited to playing on the Meltwater Champions Chess Tour and talks about his plans for the rest of the year. 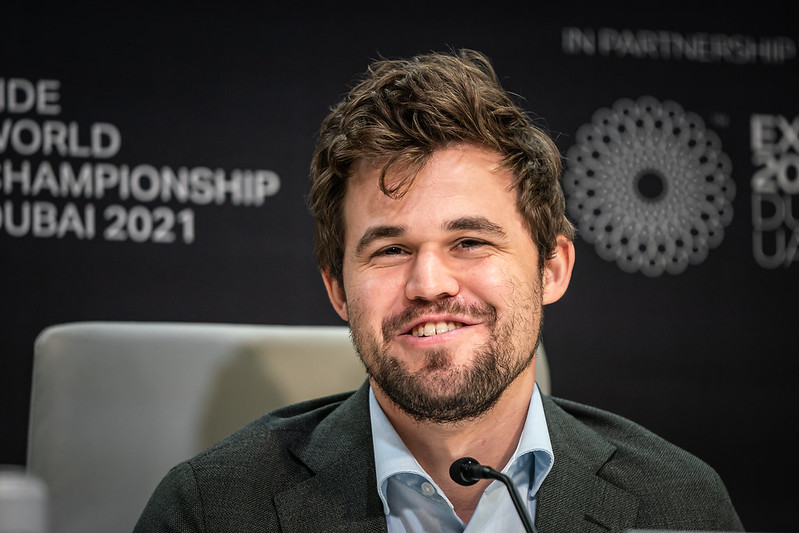 Magnus Carlsen shocked the chess world after his convincing World Championship win against Ian Nepomniachtchi in Dubai, by announcing his fifth title match likely was his last. A month after the match had finished, he added that the chances hadn't increased.

I have to admit that there have been times after the match that I had regrets about what I said after the match. Why didn't I just make it simple and say that I am done?

Asked whether he has come closer to a decision on the 2023 World Championship match, he says:

I haven't come closer to playing another match than I was before, but there also have been times when I am not 100 percent certain. I will make that decision later. But if there is anyone who expects and still hopes that I will say yes to playing, I will have to prepare them to be disappointed.

It's not the first time Carlsen has expressed a lack of interest in playing World Championship matches. After his win against Fabiano Caruana in 2018, the Norwegian superstar told NRK that “it's tough both physically and mentally” and that it's “supposed to be fun to play chess”.

In the interview with VG, the 31-year-old also points out that he thought everything was simpler and better between 2010 and 2013, as he felt more comfortable with a situation where he knew he was the best player.

Many of Carlsen's rivals have expressed disbelief and do not believe Carlsen will give up his title freely. One of them is Vladimir Kramnik who told chess24 he thinks Carlsen will play in the end.

There is no conclusion to draw. Let's wait and see. Of course he has the full right to step away from the title and not to play matches, like every person. Of course he can stop chess if he wants. It will be a pity for everyone, of course, but he has the full right. It's just what he said, you are tired after the match, you are also relieved, so you just say something. I don't think we have to draw some conclusions or discuss. Let's see what he will do. My guess is that he will play the next match against any opponent.

Carlsen says he informed his team that his match against Nepomniachtchi likely would be his last in advance, regardless of the result. Most important was not to win, but not to lose so he could remain undefeated in matches.

I wanted to quit while on top, and it's clearly what's most likely to happen, but who knows. I have changed opinions before, but when I have the same feeling for too long, it rarely changes back. So no, I am not closer to playing a title match than I was after the World Championship.

Carlsen has had a perfect start to 2022, winning his only classical event in Wijk aan Zee and the first two events on the Meltwater Champions Chess Tour, the Airthings Masters and the Charity Chess Cup.

Besides extending his contract with gambling site Unibet, Carlsen has been busy travelling lately, first in Barcelona, where he played football...

...then beating David Howell in a duel...

...and showing off some impressive poker skills.

He also paid a visit to Switzerland, which caused quite some excitement.

While Norway Chess is his next classical event, it's not clear what will be the World no. 1's next stop after that. For now it seems likely that he intends to take part in at least one of the classical events on the Grand Chess Tour.

He tells VG that the long break between Wijk aan Zee and Stavanger is a bit coincidential, and assures his fans that he still loves playing chess and has no intention of retiring.

I am still an active chess player, and Peter still works for me. I'd guess there will be 3-4 classical events over the rest of the year, meaning there will be 4-5 total, just like in a normal year. And I will play the Champions Chess Tour digitally every month.

Carlsen notes that he is commited to playing on the Meltwater Champions Chess Tour, with the Oslo Esports Cup next up. Carlsen will take on seven stars at home in Norway's capital, an event that will be broadcast live on chess24.