Magnus Carlsen got off to a slow start against Parham Maghsoodloo, losing Game 5 to make the score 2.5:2.5, but then blew away his opponent with an incredible 11 wins in a row to end their Speed Chess Championship match as a contest. “Once it starts going south then it’s all psychological,” explained Magnus, who now faces a quarterfinal match against either Anish Giri or Vladislav Artemiev. Magnus was pulling no punches as he commented, “I would rather play Artemiev - I think he’s by far the stronger blitz player of those two!” 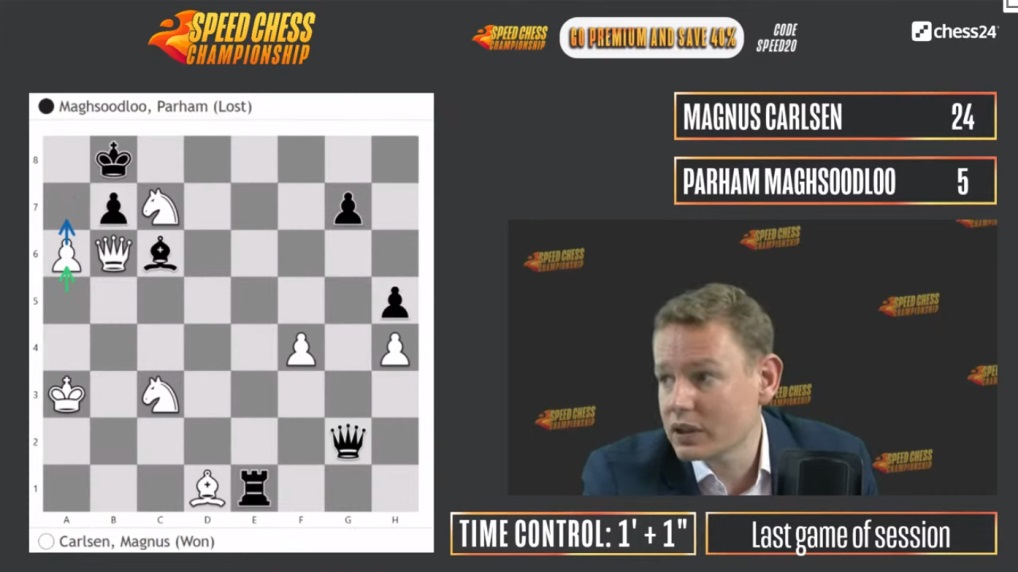 It was finally all over, a couple of hours after the outcome of the match was clear

You can replay all the games from the Carlsen vs. Maghsoodloo match using the selector below (Round 1 is 5+1 games, Round 2 is 3+1 games and Round 3 is 1+1 games).

And here’s our live commentary from Jan Gustafsson and Lawrence Trent.

A shaky start for Magnus

5.a4?! was indeed a mouse-slip (instead of 5.a3), but when Magnus talked to Danny Rensch and Jon Ludvig Hammer on the Chess.com broadcast afterwards he said it didn’t bother him too much.

I was not too worried. I’m probably just a little bit worse after this move, so I thought if I continue to play normal after that it would be ok. Obviously it’s not an ideal start to the match, but I’ve had worse starts in these sorts of matches before and come back, so I was not worried at all. It’s better to mouse-slip in the opening when it doesn’t really matter that much than later.

Magnus went on to draw that game, and in fact there were three draws in the first four games, with Parham giving as good as he got. Magnus won Game 3, but Maghsoodloo hit back to level the scores after 20.Bxd4? allowed the winning shot 20…Ba4!

“I haven’t really played so much blitz online in a long time, so I needed some time to get going,” said Magnus. One recent blitz game Magnus did play was last week against Argentinian former Real Madrid player and manager Santiago Solari, with the game taking place during the presentation of an upcoming Real Madrid and chess24 charity event on November 15th (see this article for more details). We now have video of that game.

Santiago played pretty well apart from blundering a piece on move 12, while Magnus, who was playing blindfold, at one point tried to make an impossible move!

In hindsight Parham may have wished he hadn’t won that 5th game, since Magnus seemed to switch on beast mode. There was no messing around now as the World Champion played the Berlin Defence and won an absolutely model game with the black pieces.

The next game Magnus struck again.

The curiosity here, however, is that Parham by no means had to freeze and lose on time in this position. Taking the bishop on h5 loses (White can check with the queen, take the e5-pawn and then the d4-knight), but a move such as 39…Qc2!, probing all White’s weaknesses, would leave Magnus only slightly better.

“As we say in German, the wheels have come off!” said Jan Gustafsson after Magnus won a 3rd game in a row, and he also won a 4th to end the 5-minute section with a commanding 6.5:2.5 lead. Parham would later lament:

I think I had so many good positions which were close to a win but I missed them very badly, not even making a draw. I lost them, and when you do it for many positions then you completely lose the control of the match, because I think in maybe the first five games it was ok, but after that I missed some very good positions and it happened three or four times more and everything went wrong after that.

Frankly I didn’t really feel that I ever found much of a rhythm, it was just a bunch of chaotic games that were somehow going my way, but I think this match format is very, very difficult to handle, because once it starts going south then it’s all psychological and at some point if you stop and you’re playing a different opponent the result might be very different, but since you continue to play the same guy you’ve suffered against then everything becomes a lot more difficult.

But the sympathy didn’t extend to the chessboard. At first it looked as though Parham might hit back in the first 3-minute game, but he squandered a winning position and then, when it should have been a draw, collapsed in one move with 42.Kd3??

Everything that could go wrong did go wrong for the Iranian player, including simply dropping a piece in the 3rd 3-minute game. Lawrence wasn’t helping.

The wins kept racking up for Magnus, until we’d reached the stage of adoption, internet chess slang for beating an opponent 10 times in a row.

There was no stopping Magnus.

He won one more game after that, before the winning streak ended at 11 games as Parham avoided a clean sweep in 3-minute with a draw to make it 7.5:0.5 and an overall score of 14:3. Even that was bitter, since Parham had been completely winning that game.

More bloodshed to end the match

If it had been a boxing match Parham’s coach would long since have thrown in the white towel, but the Speed Chess Championship format is that the full time has to be used up. There’s some incentive to keep fighting, since half of the $4,000 at stake in Round 1 matches is split according to the scoreline.

Parham opened the 30-minute bullet session with a fine win…

…until it wasn’t any more for Parham.

The Iranian star was philosophical afterwards.

Magnus, meanwhile, faces a quarterfinal against either Vladislav Artemiev or his arch-rival Anish Giri. Either match should be great fun!

This is how the tournament bracket looks:

The next scheduled matches are Firouzja vs. Fedoseev at 18:00 CET on Wednesday November 4th and So vs. Abdusattorov on Sunday November 8th, and you’ll be able to watch all the action here on chess24.