Fabiano Caruana heads an all-star line-up as the 3rd stage of the 2018 Grand Chess Tour is about to start in St. Louis. All the players but Leinier Dominguez will be staying in the city for the Sinquefield Cup, where Magnus Carlsen is the replacement. With the champ missing the speed chess, though, Rex Sinquefield could talk at the opening ceremony about Caruana bringing, “the World Championship back to St. Louis, where it belongs”, while the players shared some priceless tips on how to beat Magnus, including, “play the best moves like a computer” (Nakamura). Easy! 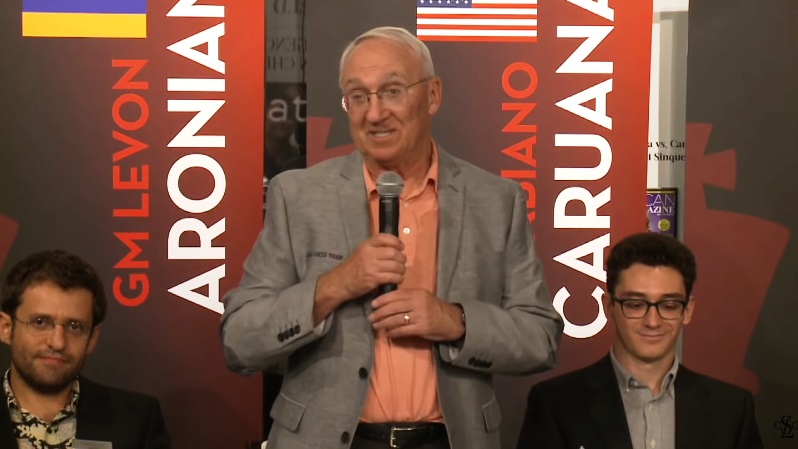 Rex Sinquefield: "I'm fairly confident he's going to bring the World Championship back to St. Louis, where it belongs... Fabi, all of us are rooting for you" | screenshot: St. Louis Chess Club YouTube

From the 11th to the 27th August St. Louis is again the capital of world chess, with the St. Louis Rapid and Blitz followed almost immediately by the Sinquefield Cup. We now know all the pairings for the $150,000 Rapid and Blitz, which has exactly the same format as in Leuven and Paris. Three days of 25 minutes + 10-second delay rapid chess (three rounds a day) will be followed by two days of 5+3 blitz (nine rounds a day).

The pairings were determined at the traditional opening ceremony, where there were speeches by Jeanne and Rex Sinquefield, while Maurice Ashley introduced and interrogated the players. You can watch the ceremony in full below:

On the eve of the tournament a banner was unveiled in St. Louis to commemorate the fact that four of the games in the first ever official World Chess Championship match – Steinitz vs. Zukertort, 1886 – had taken place in St. Louis (the first five were in New York and the final 11 in New Orleans):

The 2018 World Championship, which starts in less than three months, was very much the theme of the opening ceremony, with Fabiano Caruana commenting, “Of course I’m preparing heavily for the match and that’s always at the back of my mind”. There was no hiding the partisanship of the organisers and commentators in St. Louis, where Caruana has a home. Rex Sinquefield led the fan club:

I’m fairly confident he’s going to bring the World Championship back to St. Louis, where it belongs!

The obstacle on that path is of course the player missing the Rapid and Blitz, Magnus Carlsen, and Mike Klein asked the other players if they could give Fabi some tips on how to slay that particular dragon:

It’s fair to say the advice won’t have Caruana dispensing with the services of his seconds just yet! Nakamura kicked things off with the helpful, “play the best moves like a computer”, while Karjakin set the tone for most of the advice with, “just play like you did in Berlin”. Wesley So suggested instead using the 2014 Sinquefield Cup as a model, though he set a more modest goal than winning the first seven games, as Fabi had there – “try to win the first two games!” Vishy and MVL agreed with the Sinquefield Cup plan, with Maxime’s memorable phrasing quoted in the tweet above.

Only defending St. Louis Rapid and Blitz Champion Levon Aronian had a slightly more elaborate take, though this time he wasn’t entirely convinced about it himself:

I think I’m not a big expert, but any time I’ve beaten Magnus it was because I’ve had some interesting, original sharp lines, but that’s what they said how you should play against Fischer, and it didn’t quite work for Spassky, though! I’m sure Fabiano will find a better way.

Levon was in good form in general, noting of Maurice describing him as the “joker”:

I can only say that it’s flattering that people don’t say something mean… which they could. I hope I will be a villain in the tournament! 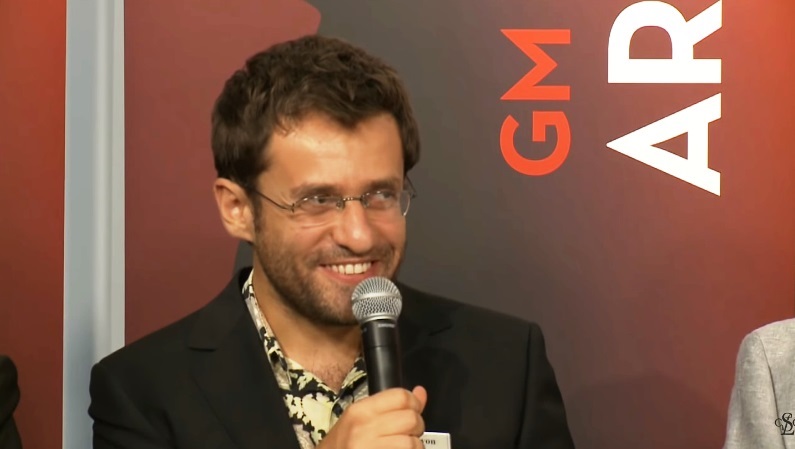 No-one was being a villain at the opening ceremony, with the possible exception of Alexander Grischuk, whose flight schedule meant he didn’t make it in time to be there. The setup in St. Louis was praised by all the participants, though world no. 3 Shakhriyar Mamedyarov noted the surprising fact that this was his first time in the city. The players weren’t even trash-talking each other, with Wesley So’s nicely phrased, “Hopefully everyone will be in great form, and especially me!” about the closest we got.

The Grand Chess Tour standings going into the St. Louis events are as follows, but remember we’re still not quite halfway on the road to qualify to play in the finals in London, since the classical Sinquefield Cup is worth more points (and money!) than the rapid and blitz events (So: “Because of the name!”): 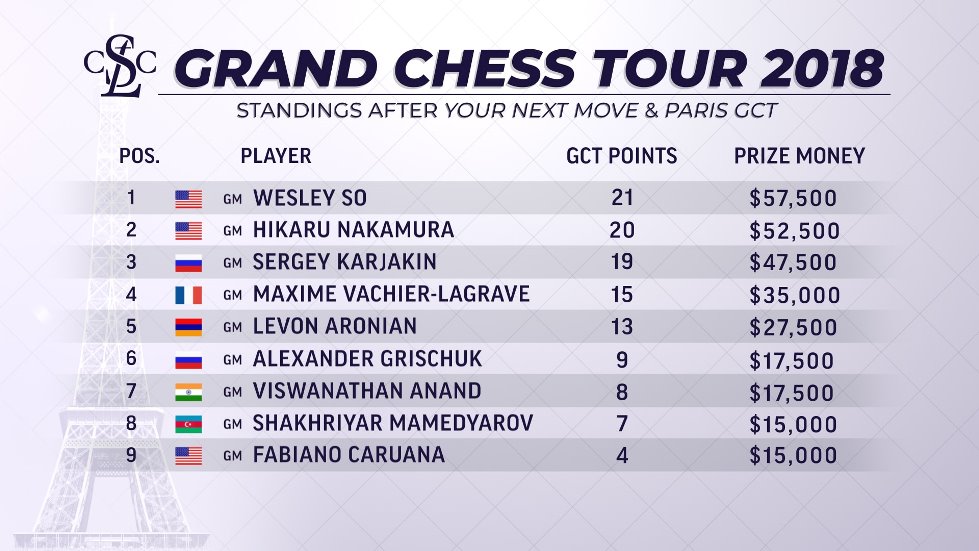 The games start at 13:00 local time (20:00 CEST) on Saturday 11th August, and there’s going to be commentary in English from the tried and tested team of Yasser Seirawan, Jennifer Shahade and Maurice Ashley, while the one and only Peter Svidler joins Evgeny Miroshnichenko to commentate in Russian (yes, he speaks that language as well – who knew!?).