Magnus Carlsen completed a brilliant 2990 performance in the Gashimov Memorial in Shamkir by beating Alexander Grischuk in the final round to end on 7/9, a full two points ahead of Ding Liren and Sergey Karjakin. Grischuk said his opponent played “amazingly well” in what was a third phenomenally good win in a row, taking the World Champion to 2860.8 on the live rating list, heights no-one else has ever reached. His personal record is 2889.2, and he can try to get closer to that when he plays the GRENKE Chess Classic in 10 days’ time. 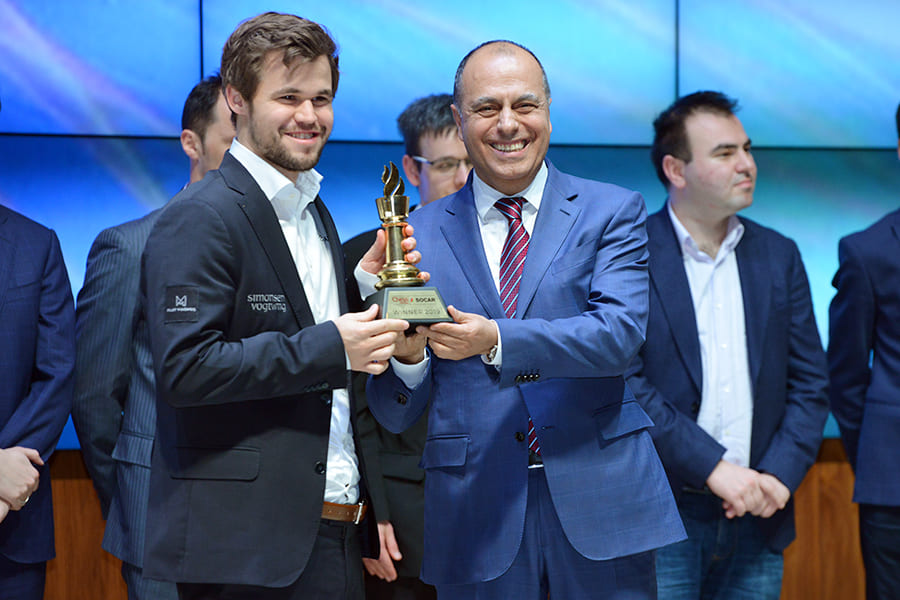 You can replay all the games from Shamkir Chess 2019 using the selector below:

And here’s the final day’s live commentary from Evgeny Miroshnichenko, including the post-game interviews with all of the players: 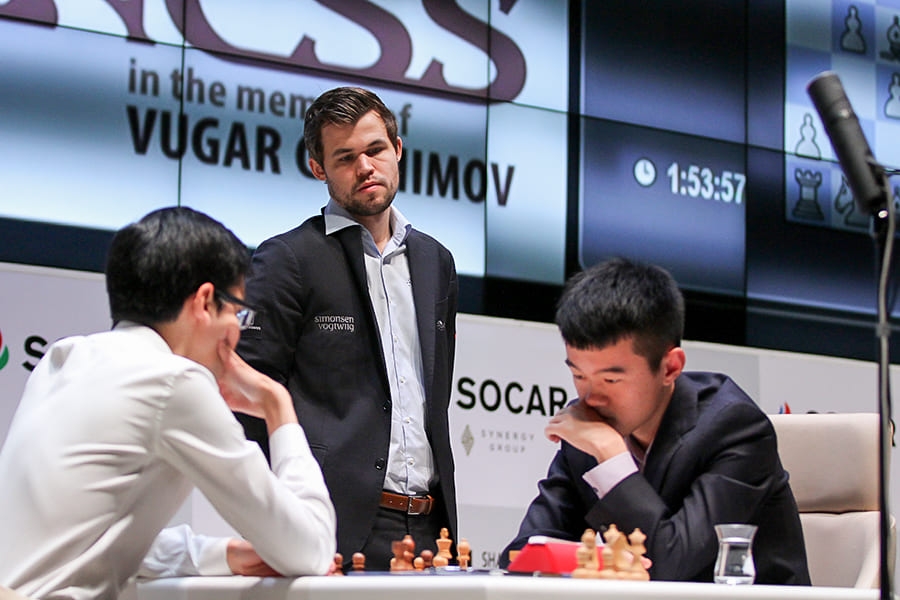 Although Magnus Carlsen had sealed first place with a round to spare, on paper it looked as though world no. 3 Ding Liren had the best chance of taking clear second place, since he had White against the struggling Anish Giri. 20 minutes after the round started, however, the players were already facing the press after a rapid draw, with Ding admitting that following his 7-hour win over Veselin Topalov the day before he couldn’t get himself in the mood for another fight. Giri had seen enough in Shamkir:

As I told him after the game, I want to fix my last place, so today is not the day of my comeback!

Giri’s next chance for that comes in one week’s time when he plays the Shenzhen Masters in China, alongside Ding, Yu Yangyi, Jakovenko, Harikrishna and Rapport. Anish Giri did, however, leave us with the perfect summary of the action still to follow in Shamkir:

As Giri also predicted Mamedyarov-Karjakin soon ended in a draw, and although Anand-Topalov and Navara-Radjabov were tense fights they were also drawn in 31 and 40 moves respectively. The day was all going to be about one man. 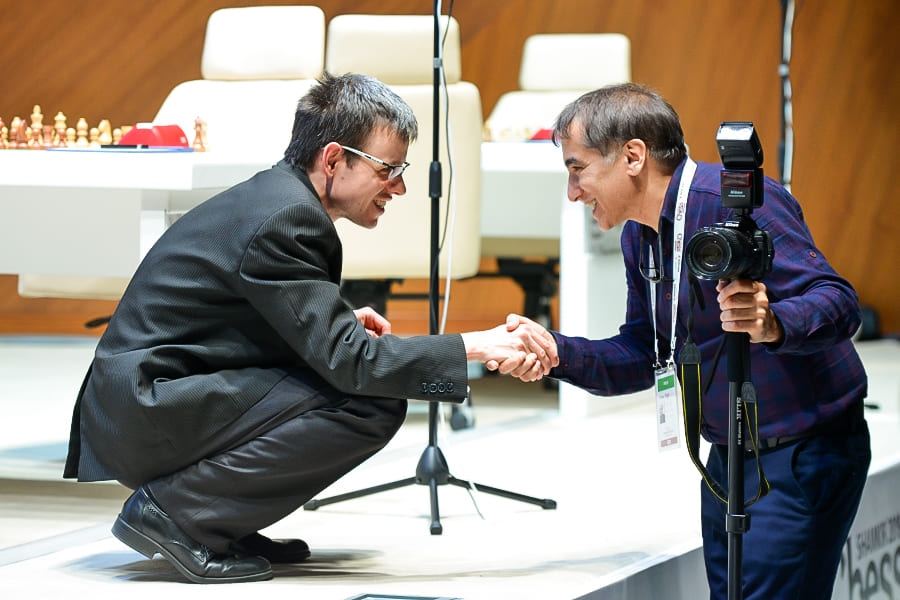 David Navara was self-deprecating as ever, commenting, "I did not deserve to play here as there are stronger players in the world like Vladislav Artemiev", but he still finished above Giri and Mamedyarov | photo: official website

There are different ways of winning super-tournaments. Last year, for instance, Carlsen also won in Shamkir, but it was a tournament where it took four rounds for any player to win a game. Magnus eventually won three, against Wojtaszek, Topalov and Giri, but none of the games were truly memorable, and the final round was a damp squib of a draw against second-placed Ding Liren. Fast forward a year and Teimour Radjabov could described Carlsen’s performance as, “a really stellar level of play, really unique,” and that comment came during the final round before the grand finale of Carlsen-Grischuk. 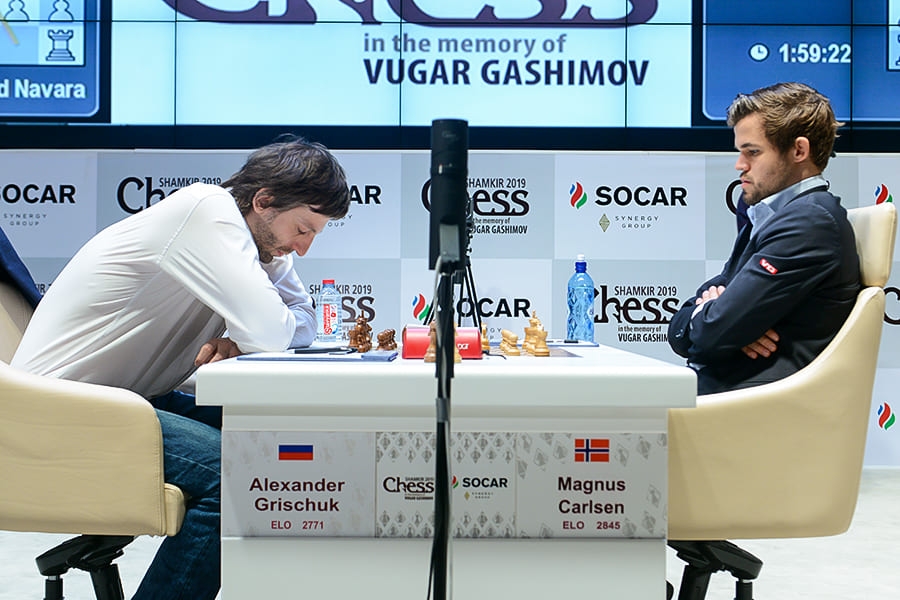 We got to see the World Champion’s mood early on, where he played the 4.d3 Anti-Berlin rather than giving in to the temptation of making an easy draw in another line.

The game left the regular tracks by move 8, with Magnus later summing up that, “generally there wasn’t much going on”. Both players pointed to 16…b5!? as a big turning point in the game, with Grischuk labelling it almost the decisive mistake: “I think I just made one very bad move.”

That seems harsh given that, at least on a low depth, it’s the computer’s first choice in the position, but the way the game went emphasized the weaknesses it created - right up to the final position when a backward pawn on a6 is about to fall. 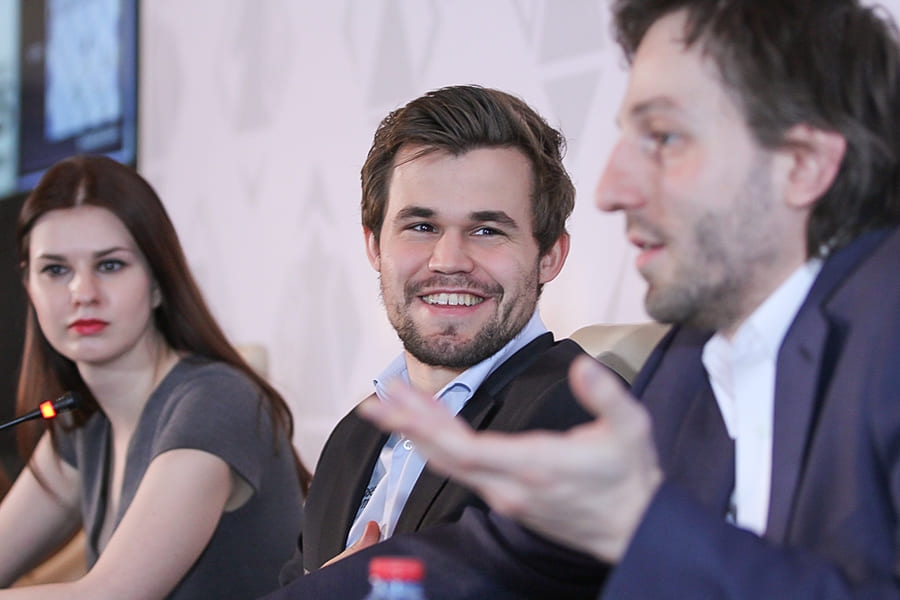 Grischuk had underestimated 17.Nb3! and spent 27 minutes trying to find a good response, though in hindsight 17…Bxb3 18.Bxb3 Ng4!? simply didn’t work out. Magnus considered the point of no return to be 28…c5?!:

28…c5 just loses to 29.Be3, more or less. After other moves it’s difficult, but probably still defensible.

For a third day in a row Magnus was about to unleash a powerful pawn sacrifice: 29…exf4 30.gxf4! Rxe4. According to the computer 31.Bb1!? was a slight inaccuracy by Magnus, however, and after 31…Re7 32.Rfe1 there was one last chance for Black to stay afloat:

As he later commented:

I think Magnus played just amazingly well today, because for me it was not clear at all. I suspected it’s bad, but I don’t know, because there are pins, counter-pins, mating nets, sometimes this is good for Black, sometimes it’s good for White, and even after 34…Nd5 I thought I should be in trouble, but 35.Rd2 was a complete surprise for me. Because if not Rd2 actually ok, I’m clearly worse, but if e.g. Bd2, just takes and Nc7 – it’s nothing special.

Karjakin had also resigned on move 39 with 21 seconds, while Giri had lost on time as he made his 38th move! Magnus was a monster leaving a trail of destruction in his wake:

Check out in-depth analysis from Spanish Grandmaster Pepe Cuenca in the following video:

That meant Magnus had completed an absolutely stunning performance, including beating two of his three World Championship challengers and, in Anish Giri, one of his biggest rivals of recent years: 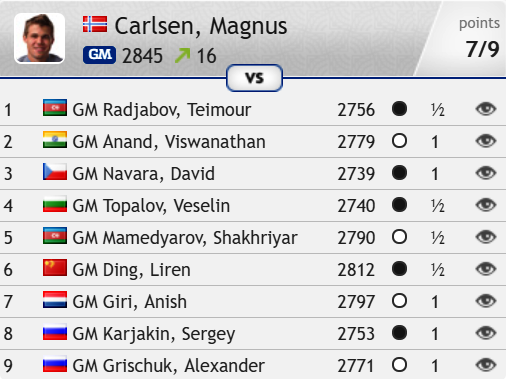 Of course for Magnus it’s far from unprecedented, but it’s been a while since a performance this good:

The Shamkir Chess 2015 result is certainly the closest comparison, since Magnus scored the same +5, also beating some very big names: MVL, Mamedyarov, Kramnik, Caruana and Mamedov. The one difference there is that Vishy Anand finished just one point back (after missing a win against Magnus!), while this time round there was a gaping 2-point chasm to the rest of the field:

In 2015 Magnus went into Shamkir on the back of a 2863 rating, but during his win at the same event in 2014 he set his personal best live rating of 2889.2 after beating Hikaru Nakamura in the second round. That personal record is of course also a world record! 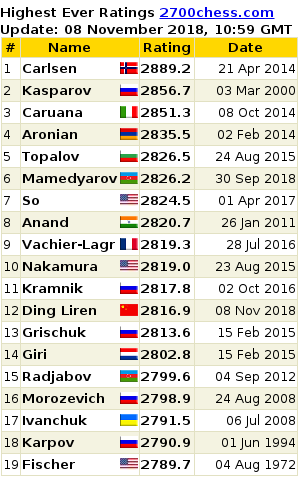 The good news for Magnus now is that he goes into the GRENKE Chess Classic that starts on April 20th (Easter Saturday) still rated a “mere” 2845. So if he wants to really make a run on that record this is going to be the easiest it gets! The likes of Fabiano Caruana, Maxime Vachier-Lagrave and dinosaur hunter Levon Aronian might have something to say about that, however: 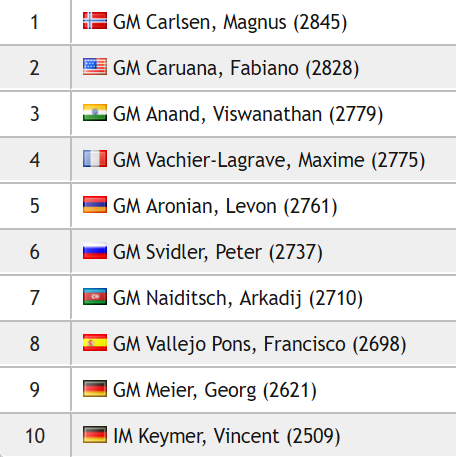 Jan Gustafsson will be back from crushing the world in Thailand to commentate live from the venues (Karlsruhe and Baden-Baden) with Peter Leko.

For now, though, Magnus deserves to bask in the glory of a truly memorable tournament! As he said at the closing ceremony, “It's one of the best tournaments I've ever played, both in terms of performance and also the quality of the games.”