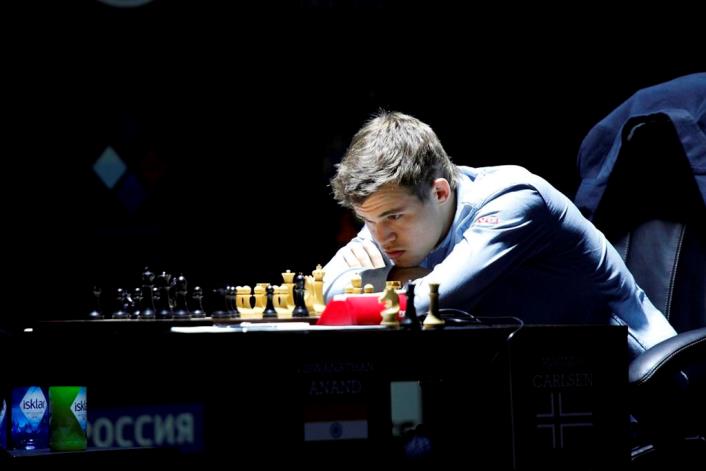 Magnus Carlsen survived a moment of sheer panic to take the lead in the match | photo: official Twitter account

Such moments can change the course of chess history. Magnus Carlsen has beaten Vishy Anand in Game 6 of the 2014 World Championship match, but only after a heart-stopping minute where the Norwegian blundered and instantly realised his mistake only to feel “massive relief” when Anand failed to spot the trick in time. IM Lawrence Trent and GM Jan Gustafsson take us through a game that put Magnus Carlsen firmly back in the driving seat with a 3.5-2.5 lead.

This game took place one year to the day that Carlsen won his first game of the 2013 World Championship match against Anand in Chennai. Jan Gustafsson annotated that game here, and was also on hand a year later to describe Game 6 in Sochi, together with his commentary partner Lawrence Trent:

Although it was a game with an awful lot to talk about there was no doubting the one moment that focused everyone's attention - that single minute of mutual chess blindness. The English live show took a break just at the moment Magnus made his fateful move and - much to the horror of Peter Svidler, who said he literally screamed - didn't return until the dust had settled. The cameras kept running, however, and captured the board during those surreal moments. Amateur sleuths can try to detect emotions in the players' hands by the board:

To fill in the sound gap we have our live Spanish coverage with IMs Lawrence Trent and David Martinez, while Spanish no. 1 Paco Vallejo had joined the show by Skype. You don't need to know Spanish to follow the excitement as 26.Kd2?? and then 26...a4?? were played. Unmissable!

The full broadcast in English can be watched below, with Peter Svidler joined by none other than former World Champion Vladimir Kramnik shortly after the calamity had occurred:

They could already see the writing on the wall:

Svidler: How do you recover after such a blunder?

Kramnik: In my experience, you don't!

The press conference, which you can also watch at the end of the video above, was of course an ordeal for Vishy, although Magnus was also, in his own words, much more relieved than happy. The players were asked when they spotted the blunder:

Immediately after I made my move… It’s just a feeling of complete panic, and then sometimes you’re very, very lucky and you get away with it. The thing is the position is sort of stably better for White so you don’t expect such things to happen. You have to be alert. Most of the time you get severely punished for making such an oversight… I’m relieved. I’m massively relieved.

The thing is when you’re not expecting a gift sometimes you just don’t take it. As soon as I played a4 I saw it.

And did it affect their subsequent play?

You can see my play wasn’t that confident. I didn’t feel that I found the right setup. I went back and forth with the king and so on. I guess it affected me to some extent.

Given the way I played the rest of the game, probably.

So Magnus Carlsen has now taken a crucial further step towards retaining his World Championship title and leads 3.5:2.5 after six games:

Vishy Anand will be glad of the rest day on Sunday to recover, but he still faces the black pieces again in Game 7. Can he come back for a second time in the match? And first things first, can he improve on what some commentators thought was an unfortunate opening today?

You can of course watch Game 7 live here at chess24 at the same time on Monday 17 November!