World Chess Champion Magnus Carlsen had a long day on Monday. First he was in Manchester, England, where Kaspersky Lab sponsored an exhibition game against Liverpool footballer Trent Alexander-Arnold. A somewhat gruesome encounter ended in a nice pure mate on move 17. Then he caught a flight to Hamburg, Germany to play against users of his Play Magnus app in the annual Play Live Challenge. Again he was taking no prisoners, as he needed just half of his 30 minutes to complete a clean sweep of the opposition. 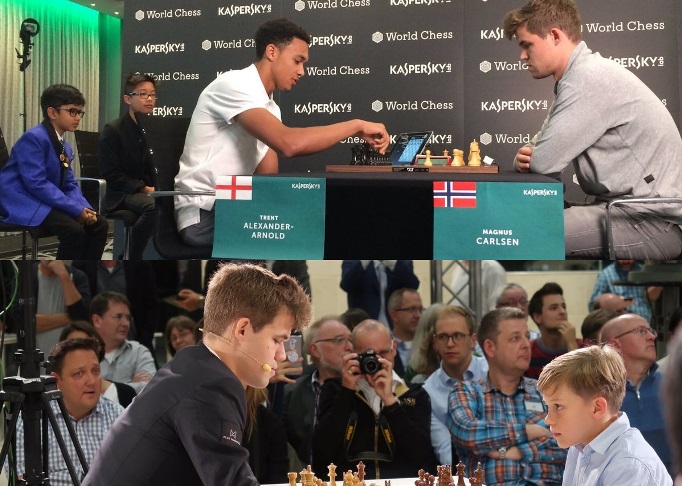 Magnus faced Trent Alexander-Arnold in Manchester in the morning and then, 800km away in Hamburg that evening, 9-year-old Justin Poniewasz and 11 more players in the Play Live Challenge | photos: BBC Merseyside and Play Magnus

Magnus Carlsen was a spectator for the World Chess Olympiad in Batumi, but we don’t have to wait long to see him back in top-level action. He’s playing in the European Club Cup that starts in Chalkidiki, Greece on Friday. Before that, however, he found time for some promotional activities as he played two fun exhibitions:

When Liverpool manager Jürgen Klopp kept attacking right back Trent Alexander-Arnold on the bench for the top-of-the-table clash with Manchester City on Sunday, pundits assumed it was because he wanted his team to play more solidly against dangerous opposition. Perhaps, however, it was to save the 20-year-old England international for the big game on Monday… against Magnus Carlsen!

The publicity stunt was organised in Manchester by Kaspersky Lab, one of the sponsors of the 2018 World Chess Championship match which starts in London a month today. Trent is a chess enthusiast, but there were concerns he might fare no better than a certain International Master Lawrence Trent, who managed to lose 4 games to the World Champion despite starting with an extra rook:

Trent Alexander-Arnold wasn’t given a rook, but time odds, with 5 minutes to his opponent’s 1. He was also given two helpers in the form of English chess prodigies Shreyas Royal (9) and Kyan Bui (12), who were able to suggest moves during the game. And, as if that wasn’t enough, he was supposed to get extra info from eye-monitoring technology provided by 4tiitoo, that would give him advance warning of what Magnus was planning.

Alas, the game itself started badly for the English player, and didn’t improve after he left a piece en prise on move 7...

There were two consolations. Firstly, that the final position was a beautiful pure mate:

And secondly, that Trent had lasted 8 moves longer than Bill Gates did in a similar time odds game. You can find Jan Gustafsson’s deep analysis of that game here.

Afterwards Magnus had his diplomatic hat on, with the BBC quoting:

It was a great game, Trent's good. He has a bit to learn but he definitely has talent.

Trent is a keen chess player who commented, “when I find the time I always try to get a game in”. He added:

Football and chess can seem like sporting polar opposites, but there are so many similarities with the modern game. Technology is playing an increasingly important role in the life of a footballer and I guess that is true across most sports now.

There wasn’t much time to hang around for Magnus, since he had a flight to catch to Hamburg for the Play Live Challenge.

The annual Play Live Challenge is an opportunity for users of the Play Magnus app, which lets you play an AI version of Magnus at different ages, to take on the 27-year-old man himself. This year there were 12 opponents in the “Spiegelhaus” in Hamburg for the event sponsored by Der Spiegel, WorldQuant and Grenke. You can replay all the games using the selector below:

And here’s the live stream, with commentary by GM Danny King, which includes Magnus Carlsen analysing with the players after the games:

As you can see, Magnus doesn’t approach simuls the way some top grandmasters do, giving a courtesy draw here and there, even if his one of his opponents was only 9 years old:

Actually if you wanted a headline for that game it could be, “World Champion misses mate-in-1!”, though mate-in-2 and a win in 22 moves got the job done.

Another youngster, 10-year-old Bennet Hagner from the Frankfurt-based Chess Tigers, impressed Magnus by playing the Benko Gambit, of which Magnus commented, “I used to love this opening as Black!” He thought their game was still exciting until move 20:

When Danny King interviewed Bennet and suggested that winning must be a big reason for playing chess, Magnus intervened:

There are many good things about chess… winning is just part of the fun - I wouldn’t say it’s the main motivation!

Magnus was impressed by the play of the female players, particularly that of 21-year-old German Constanze Wulf. He pointed out the opening with 5.f3, which his opponent didn’t know, meant something to him:

It’s an opening that I’ve only played twice, this game and the last game against Karjakin in the World Championship match!

In the middlegame Constanze surprised Magnus by finding a way to sacrifice an exchange and keep in the game. She eventually cracked, but if everyone had kept quiet she might even have won the game… since the World Champion forgot that it hadn’t finished! Alas, it was pointed out to him:

The closest anyone came to an upset was Christoph Rottwilm, who until just before the event only expected to be a spectator:

The first 27 moves had gone well:

If Christoph had retreated his c5-knight here Magnus admitted he had no clear path to victory, but instead 27…Kf7? 28.Nxa5! dropped a pawn, when the rest was predictable.

Magnus found time to offend 67 million Frenchmen, but it’s likely his quip was targeted at no more than a couple!

So Magnus had maintained his 100% record in the Play Live Challenge for another year:

As we mentioned at the beginning, we’ll next get to see Magnus in action in the European Club Cup, which starts this Friday. The line-up features 18 2700 players!