Carlsen-Aronian in Tata Steel Masters Round 1

8-time Wijk aan Zee Champion Magnus Carlsen will play 4-time Champion Levon Aronian as the Tata Steel Masters begins on Saturday, January 14th. We’ve also got Caruana-Giri, Gukesh-Ding and Praggnanandhaa-Erigaisi in Round 1 as the year 2023 in chess really begins. Laurent Fressinet and Peter Svidler will be commentating here on chess24, with David Howell replacing Laurent for Round 3 onwards. 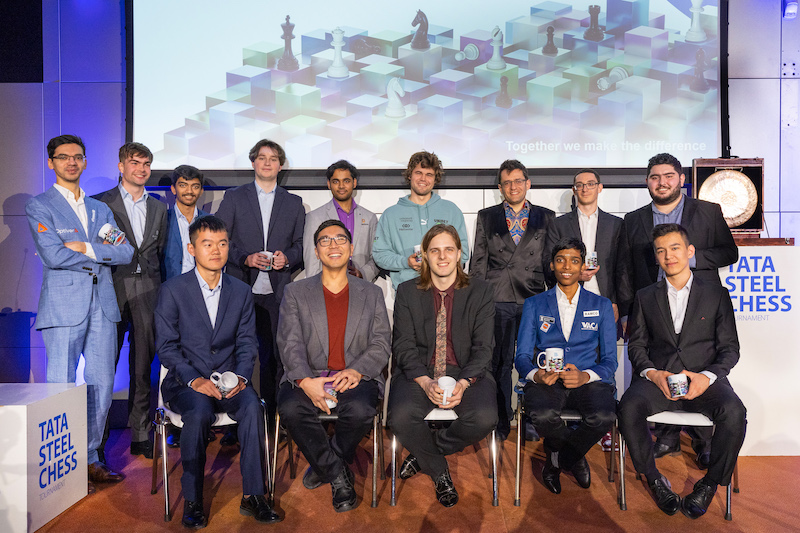 5-time Champion Vishy Anand was guest of honour as the 85th edition of the top event in Wijk aan Zee was opened on Friday. We got the following pairings:

Magnus Carlsen, fresh from winning both the World Rapid and Blitz Championships, will be out to defend his title and win a 9th Tata Steel Masters, though in Levon Aronian he faces the one player in the field who’s also won multiple titles.

This will be approaching their 70th clash in classical chess, so it’s perhaps no surprise that it’s also a meeting between the two oldest players in the field, with 32-year-old Magnus younger only than Levon, who’s now 40 and comes into the event as a new father.

That’s not the only encounter between past winners, as we also have 2021 Champion Jorden van Foreest facing 2017 Champion Wesley So. That Jorden is the lowest-rated player in the field tells you all you need to know about the strength of the event, while it’ll be fascinating to see Wesley back in action. Despite winning the 2022 Global Chess.com Championship he explained that he’s focused on trying to improve his classical results.

Fabiano Caruana vs. Anish Giri feels like a clash of champions, but while Fabi won in 2020, local hero Anish has fallen foul of the introduction of tiebreaks for 1st place. Previously all players tied for 1st were considered co-champions, but in 2018 Anish lost a playoff to Magnus, while in 2021 he was defeated by Jorden. Anish has been getting in the mood for the event…

Much of the emphasis this year, however, will be on the “kids”, as the phenomenally talented new generation of chess stars comes of age. In Round 1 we have the all-Indian meeting between 17-year-old Praggnanandhaa and 19-year-old Arjun Erigaisi. Together with 16-year-old Gukesh any one of them could have a break-out event, and Vishy Anand was on hand to give some tips.

Gukesh will be taking on world no. 2 Ding Liren, who plays his first classical game since beating Hikaru Nakamura on July 4th last year in Madrid to earn a World Championship match against Ian Nepomniachtchi. It’ll be fascinating to see what kind of form the Chinese no. 1 is in just three months away from the match.

18-year-old phenomenon Nodirbek Abdusattorov didn’t manage to defend his World Rapid Championship title recently, but he can enhance his classical reputation, which in 2022 included a 2800+ performance as Uzbekistan won the Chess Olympiad. In Round 1 he faces one of the most entertaining and honest players in chess, Richard Rapport, who is representing his new federation, Romania.

That leaves only the clash involving 18-year-old German GM Vincent Keymer, who was in brilliant form as he took the silver medal in the World Rapid Championship in Almaty. His opponent, 22-year-old Parham Maghsoodloo from Iran, went into the final round there with a chance of gold, but for that he had to beat Magnus Carlsen… instead he lost, and Magnus took the title.

Parham is playing as a late replacement for Polish World Cup Champion Jan-Krzysztof Duda, who had to pull out at the last moment for personal reasons.

We also had a late replacement in the Tata Steel Challengers, from where the winner qualifies to the 2024 Masters. 2nd seed Salem Saleh dropped out and was replaced by Serbian GM Velimir Ivic.

The focus is again likely to be on the young stars in the Challengers, with 13-year-old US GM Abhimanyu Mishra (the holder of the record as the youngest ever grandmaster) taking on 16-year-old Dutch talent Eline Roebers, who matched Pia Cramling’s 2532 performance on Board 1 but just missed out on individual gold at the 2022 Olympiad in Chennai.

Perhaps the player with the greatest chance of forcing his way into the Masters in 2024, either by winning the Challengers or rising fast in other events, is 17-year-old Javokhir Sindarov, another member of the fantastically strong Uzbek team. He begins his campaign with a tough test against Alexander Donchenko.

Our live commentary features Peter Svidler, who will be joined by Laurent Fressinet for the first two rounds, before David Howell joins for the remainder of the tournament. 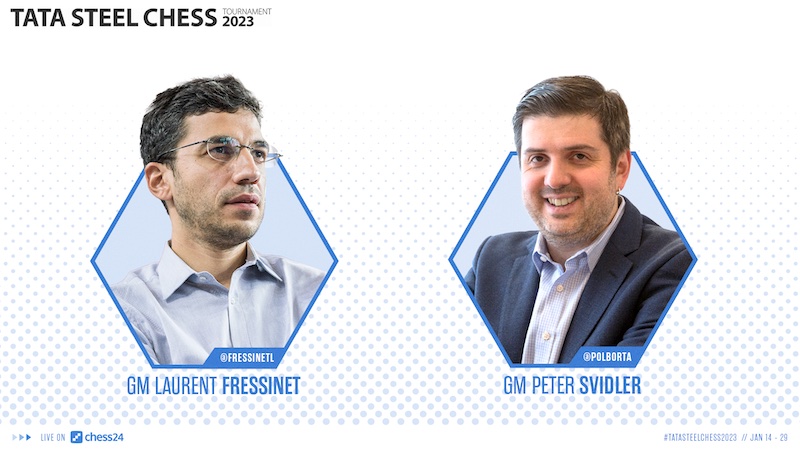