Carlsen and Firouzja on collision course?

Magnus Carlsen takes on Nils Grandelius on Thursday as the Banter Blitz Cup quarterfinals begin. In the semi-finals the winner of that match will take on the winner of Saturday’s Ray Robson vs. Sanan Sjugirov. On the other side of the draw is 16-year-old Alireza Firouzja, who’s conceded no more than 2 points in any match so far. He’s likely to be tested harder by Georg Meier, who’s crushed the dreams of Jan-Krzysztof Duda and Parham Maghsoodloo, while Eduardo Iturrizaga takes on S.L. Narayanan. 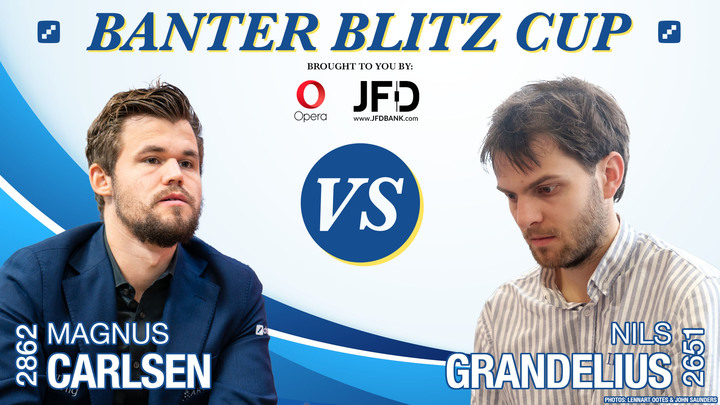 Here’s the schedule so far – click on a name to watch the player’s stream:

Let’s take a look at the matches ahead:

Magnus Carlsen needs absolutely no introduction. The Norwegian World Champion has powered his way to the quarterfinals, with the only significant wobble coming when he lost the first two games to Rauf Mamedov:

His opponent is 26-year-old Swedish no. 1 Nils Grandelius, who has worked as a second for Magnus but amazingly has met his Scandinavian rival only twice at the board, both times when Nils was a qualifier for the 2016 edition of Norway Chess. Their pre-tournament blitz game was a draw before Magnus won one of the wildest games you’ll see at a super-tournament!

Nils has been impressive in the Banter Blitz Cup…

He enjoys crazy tactics, even if they sometimes get out of his control…

…and how many players would describe an upcoming match with Magnus, rated over 200 points higher, as “incredibly fun”!?

It should definitely be a lot of fun to watch – and will probably need to be watched twice to see it from both players’ point of view!

25-year-old Ray Robson from the USA first played 27-year-old Russian Sanan Sjugirov in the World Under 12 Championship in 2005! That game was a draw, while the U12 was one event Sanan didn’t win – but he did win the World U10 and U14 Championships instead. Ray Robson became a grandmaster before his 15th birthday, and needless to say both players were very good, very young. They’ve shown in this year’s Banter Blitz Cup that the talent has gone nowhere:

The last Banter Blitz Cup matches of both players were highly impressive. Ray knocked out 2703-rated David Anton, while Sanan Sjugirov managed to brush aside perhaps the fastest player in online chess - Andrew Tang! It was a reminder of the form he showed, for instance, in finishing just half a point behind Magnus Carlsen and Yu Yangyi in the 2015 Qatar Masters: 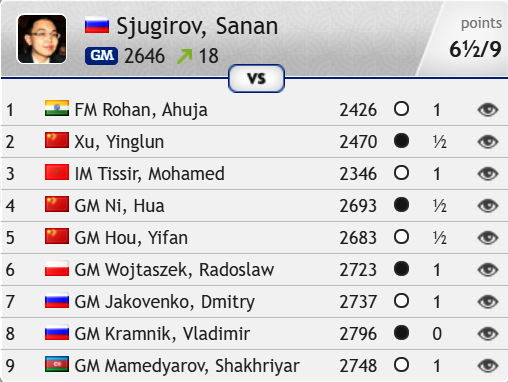 On paper this might look like a mismatch. Alireza Firouzja is the hottest property in chess and at only 16 years old has burst into the Top 2700 and shown he can beat anyone. He won silver in the World Rapid Championship, almost beat Magnus in the World Blitz, took the lead at the halfway stage in Wijk aan Zee and won his first supertournament in Prague. He’s rated 2723 and has left a trail of destruction in his wake in the Banter Blitz Cup:


As you can see, no-one has taken more than 2 points off the kid, and against both Laurent Fressinet and Matthias Bluebaum he won his last 6 games in a row!

32-year-old German Grandmaster Georg Meier is rated a much more modest 2629 and should be the clear underdog, but just look at the players he’s knocked out, ending with one of the big favourites, Jan-Krzysztof Duda:

The last quarterfinal features another player who’s been crushing dreams in Meier-style: 22-year-old Indian GM Sunilduth Lyna Narayanan. In Round 1 Ivan Salgado seemed to have quit in disgust as he was bulldozed 8:0, though he returned to play out a draw in the final game. More high-profile victims followed:

His opponent will be 30-year-old 5-time Venezuelan Champion Eduardo Iturrizaga, who has also knocked out some big names:

The Round 4 match was balanced on a knife-edge as 15-year-old Nodirbek Abdusattorov let countless chances to seal the match slip in Game 15... 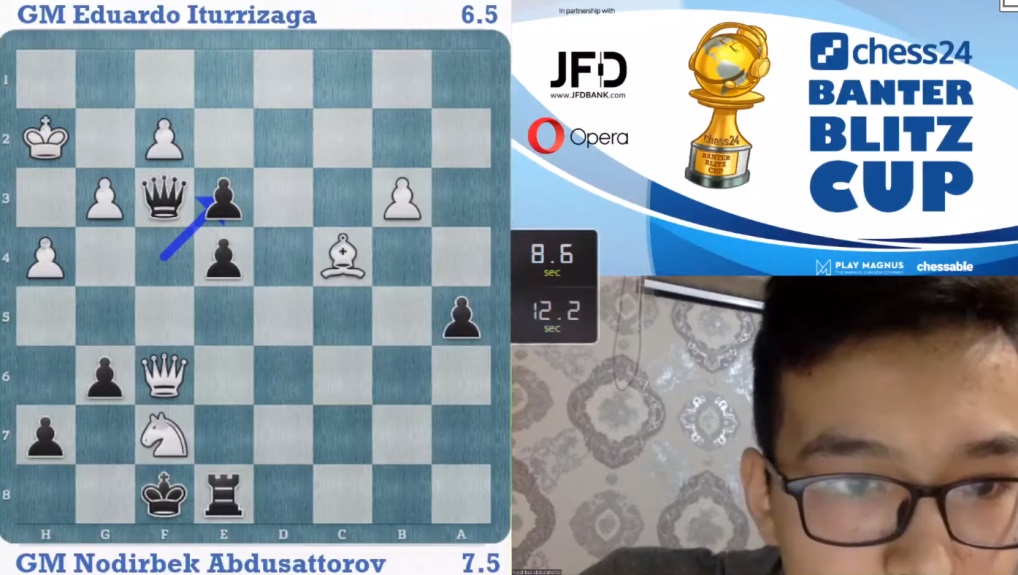 fxg3+ would have won the white queen and the game on the spot, but both players were in time scramble mode

...and then suffered an unfortunate disconnection in the 16th and final game. The players agreed to replay the game and, with both players’ nerves frayed, it was Iturizzaga who went through to the quarterfinals. Nodirbek had been very unlucky but was mature enough to point out afterwards that he'd been lucky to win his previous game by the same 8.5:7.5 score.


You can replay all the games from the Banter Blitz Cup using the selector below:

Don’t miss the quarterfinals, that start with Magnus Carlsen taking on Nils Grandelius at 19:00 CEST today!