Magnus Carlsen and Ding Liren, the chess world numbers 1 and 2, will be in action as the 3rd edition of the Chessable Masters starts May 19th at 18:00 CEST. The 16-player $150,000 tournament is the 4th stage on the $1.6 million Meltwater Champions Chess Tour. It will also feature Shakhriyar Mamedyarov and Anish Giri, as well as two of the hottest young talents around, 16-year-old Praggnanandhaa and 13-year-old Abhimanyu Mishra. 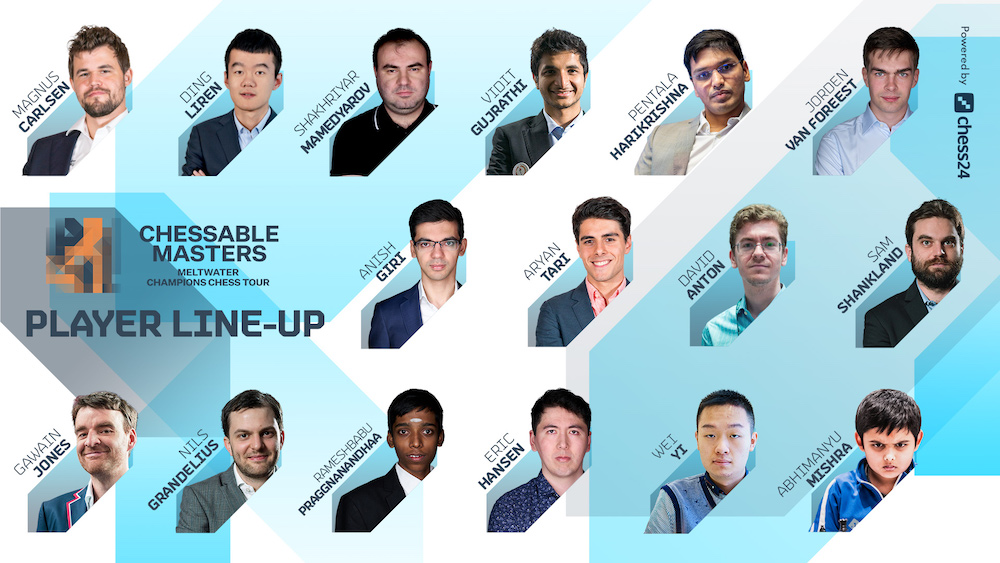 The Chessable Masters, sponsored by our friends at Chessable, is the first online tour event to celebrate its 3rd edition. Back in 2020 it was the 3rd stage of the original Magnus Carlsen Chess Tour and saw Magnus beat Anish Giri in the final. Then in 2021, with Magnus busy at the World Cup, Wesley So won the now Meltwater Champions Chess Tour event against Liem Le. What will 2022 bring?

We could get another Carlsen-Giri final, as the two great rivals both start. Here’s the line-up:

Tour leader Magnus Carlsen will be hoping to get back on track after slipping up on the final day of the Oslo Esports Cup, enabling Jan-Krzysztof Duda to win the first Major of the 2022 season. It will also be a warm-up for Norway Chess (starting May 30th) for Magnus as well as fellow Top 10 stars Anish Giri and Shakhriyar Mamedyarov.

World no. 2 Ding Liren is taking part after his remarkable April marathon meant he’s played the required number of games to take a spot in next month’s Candidates Tournament — unless Sergey Karjakin wins an appeal against his ban from chess.

Ding Liren will once again be fighting the clock, however, with games starting at midnight in China. He’ll be joined by his countryman Wei Yi, who is something of an enigma of modern chess. 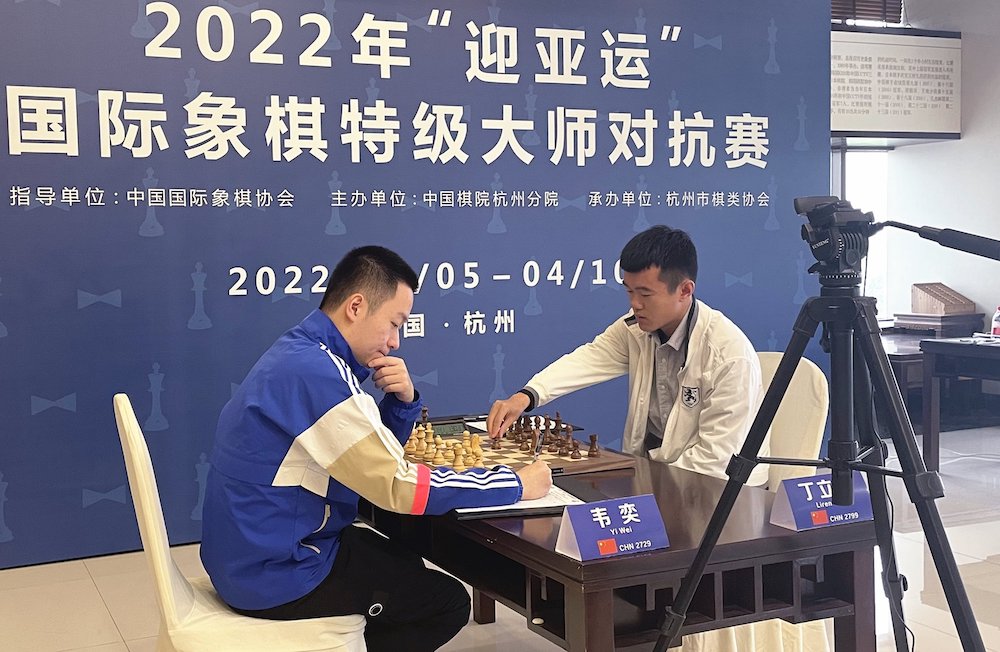 The 3-time Chinese Chess Champion exploded onto the chess scene and, at 15, became the youngest player ever to cross the 2700 mark (still faster than Alireza Firouzja, who was quicker than Magnus Carlsen). Wei Yi then failed to take the next step into the absolute elite, but he’s still only 22 and has time to make another leap — he’s been keeping a low profile for now, since he hasn’t played outside China since the pandemic began.

There are 2022 Tour debuts for Sam Shankland, who will be hoping to hit back after a disappointing American Cup…

…as well as Aryan Tari, Nils Grandelius and Abhimanyu Mishra. Last June Abhimanyu became the youngest grandmaster in history at the age of 12 years, 4 months and 25 days. He then made his first tour appearance in the 2021 Chessable Masters and, now 13, is continuing to show his potential. In March this year he won the Spring Chess Classic B event in Saint Louis with a 2739 rating performance.

The other junior in action, 16-year-old Praggnanandhaa, needs no introduction, with the Indian prodigy getting off to a runaway start in the Oslo Esports Cup before falling at the finish. Let’s hope he’s got his exams out of the way before the Chessable Masters begins!

When does the Chessable Masters start?

The Knockout features 4-game matches, one each for the quarterfinals and semi-finals, and two such matches for the final. If still tied, there are two 5+3 blitz games followed, if needed, by an Armageddon game, where White has 5 minutes to Black’s 4, but Black only needs a draw. 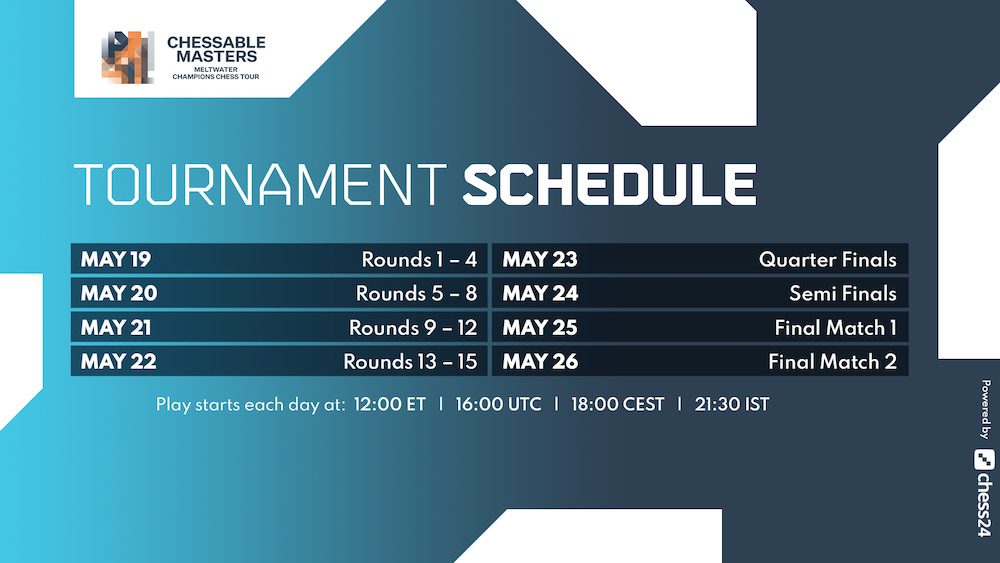 What’s at stake in the Chessable Masters?

There’s a $150,000 prize fund for the Chessable Masters, with players earning $750 for each win and $250 for each draw in the Prelims. In the Knockout stages they can earn up to an additional $25,000 for finishing first. 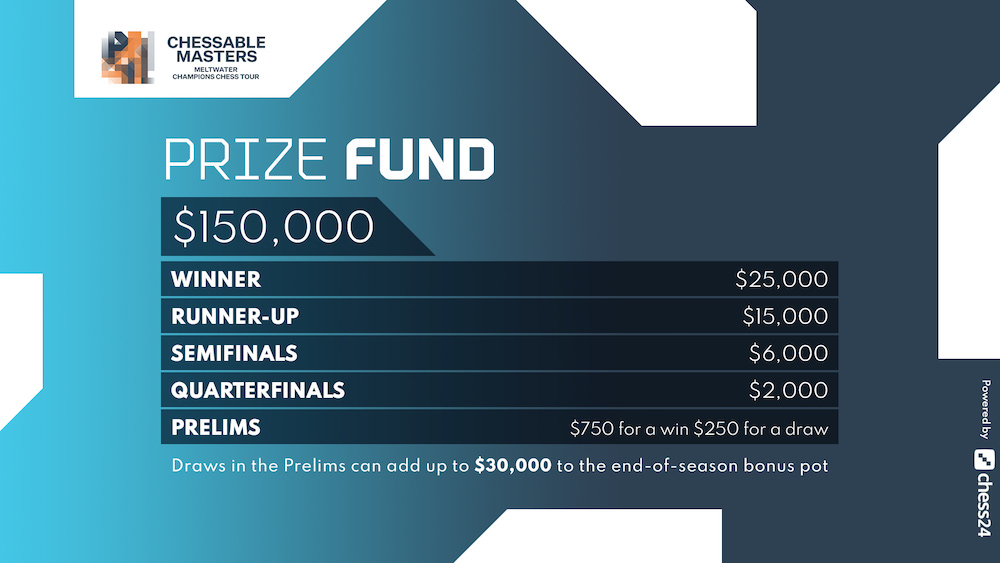 That’s not all, since the top two finishers automatically earn an invite to the 2nd Major Tournament, starting August 12th in Miami, Florida. 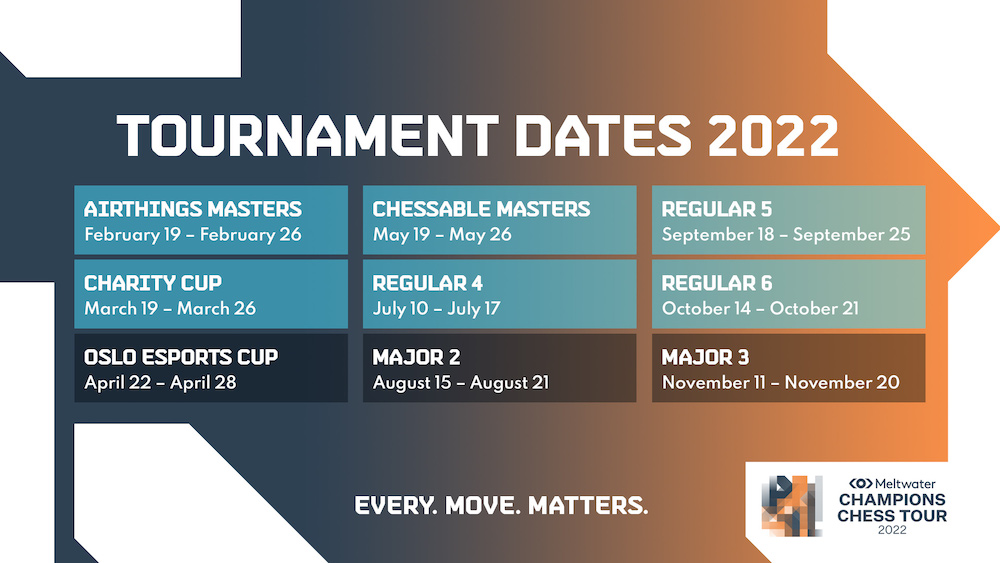 Where can I watch the Chessable Masters?

Once again we’ll have all the action live right here on chess24 from 18:00 CEST on Thursday, May 19th. We have two streams in English — the beginner-friendly stream from our Oslo studio, with David Howell, Kaja Snare, Simon Williams, Jovanka Houska and Askild Bryn… 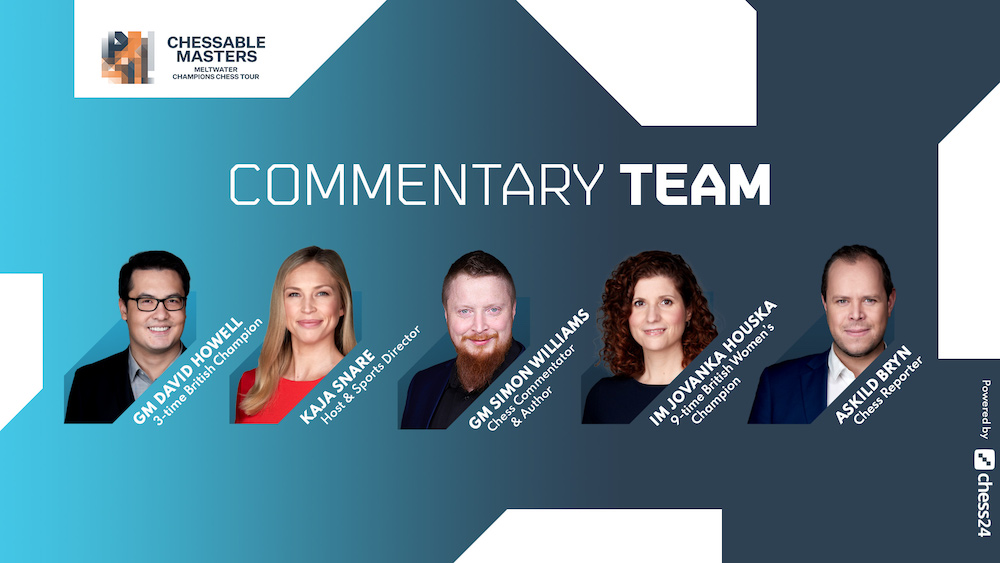 …and a new commentary duo of Jan Gustafsson and Daniel King — with Pepe Cuenca and Tania Sachdev making guest appearances. 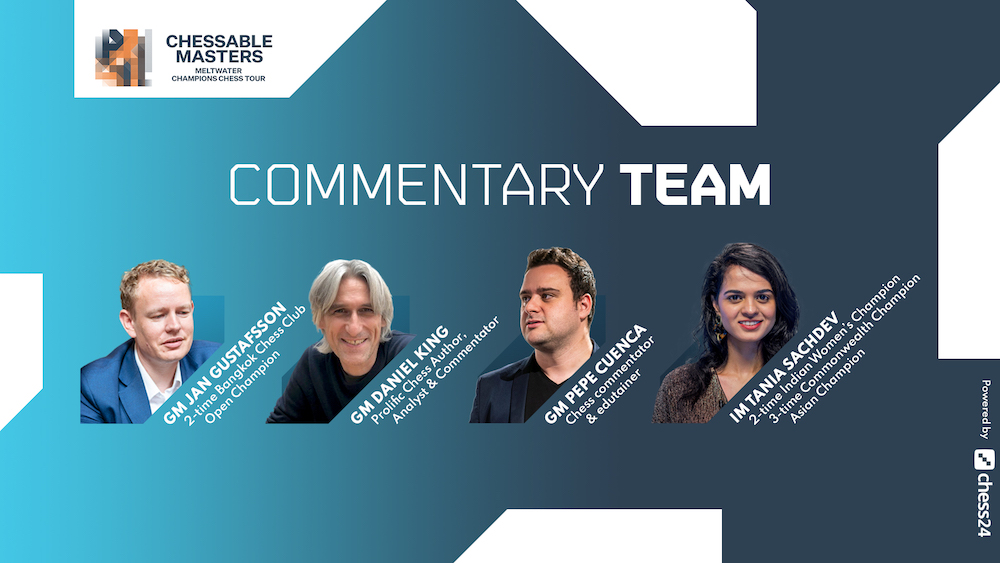 Don’t miss all the Chessable Masters action here on chess24 from 18:00 CEST on Thursday, May 19th!