Magnus Carlsen and Fabiano Caruana both won with the black pieces as their FIDE World Fischer Random Championship semi-final got off to an explosive start. In the other match Ian Nepomniachtchi and Wesley So drew both their games on Day 1 with Nepo disappointed to have missed chances but also admitting “you are not going to save this endgame every day” of the piece down position he got in the first game. The action continues until Saturday, when the new Fischer Random World Champion will take home $125,000. 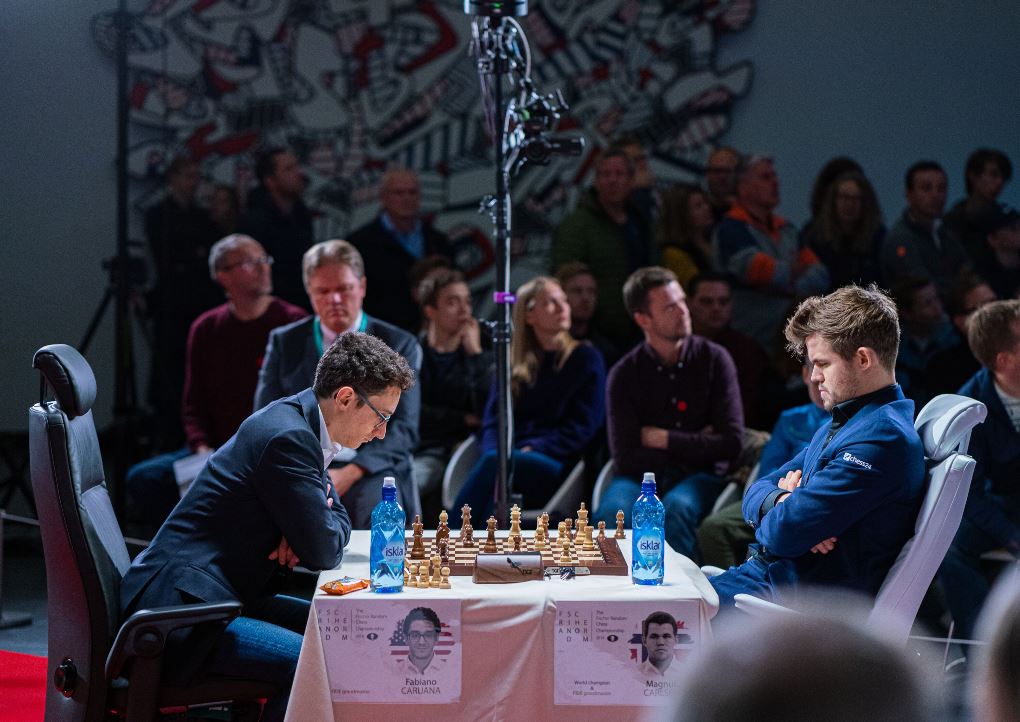 Caruana-Carlsen was as enthralling as ever! | photo: Lennart Ootes, official website

Last year Magnus Carlsen won an unofficial 16-game Chess960 or Fischer Random World Championship match against Hikaru Nakamura in the Henie Onstad Art Center in Høvikodden, near Oslo, Norway. This year the FIDE sanctioned semi-finals and final are taking place in the same venue, with Magnus Carlsen joined by online qualifiers Fabiano Caruana, Ian Nepomniachtchi and Wesley So. Hikaru lost out in the quarterfinals. 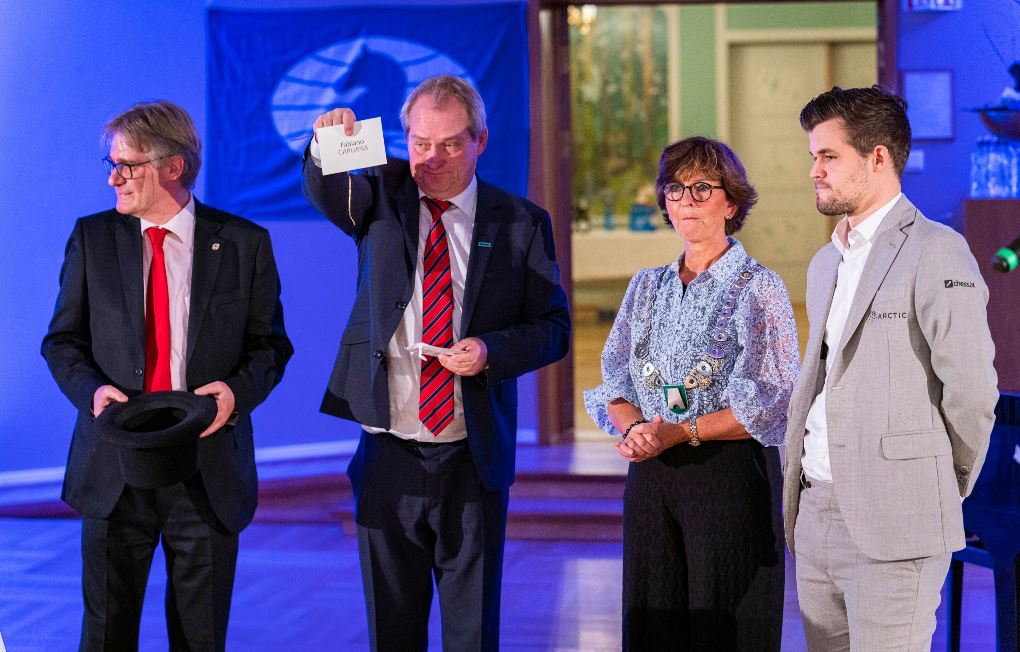 Carlsen-Caruana would have been an ideal final, but since there's no guarantee both players would have got there if not drawn together in the semi-finals we can't complain! | photo: Lennart Ootes, official website

The semi-final pairings were decided at the opening ceremony, where we got the World Championship rematch Carlsen-Caruana as well as Nepomniachtchi-So. The winners will of course play a final, while the losers meet in a 3rd place playoff, so that all the players will be in action for six days, with a rest day on Wednesday. Each match lasts three days, with a somewhat complicated and unusual system of points and time controls (strangely the long games have no increment, while the fast games do):

If a match is still tied at the end of Day 3 an Armageddon game will be played, where White has 5 minutes to Black’s 4 but a draw counts as a win for Black. The prize money at stake is as follows: 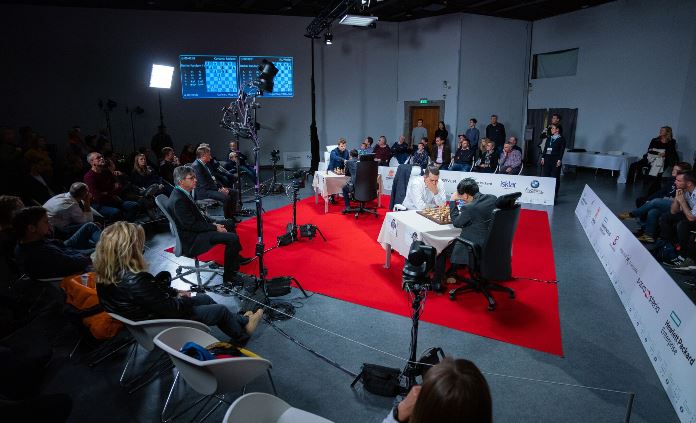 With just four players it was possible to combine a studio-like setting with letting the audience get up close to the players | photo: Lennart Ootes, official website

Of course it goes without saying that all the games are played in randomised positions, with the position on the first two days picked 15 minutes before the action starts and used for both games. Unlike in St. Louis the players are able to use computers, with Wesley So mentioning he’d had 3 minutes to prepare with an engine before his first game – the extra gap between the games means players have more time to prepare for the second, though of course they can use their time as they choose!

So let’s get to the action: 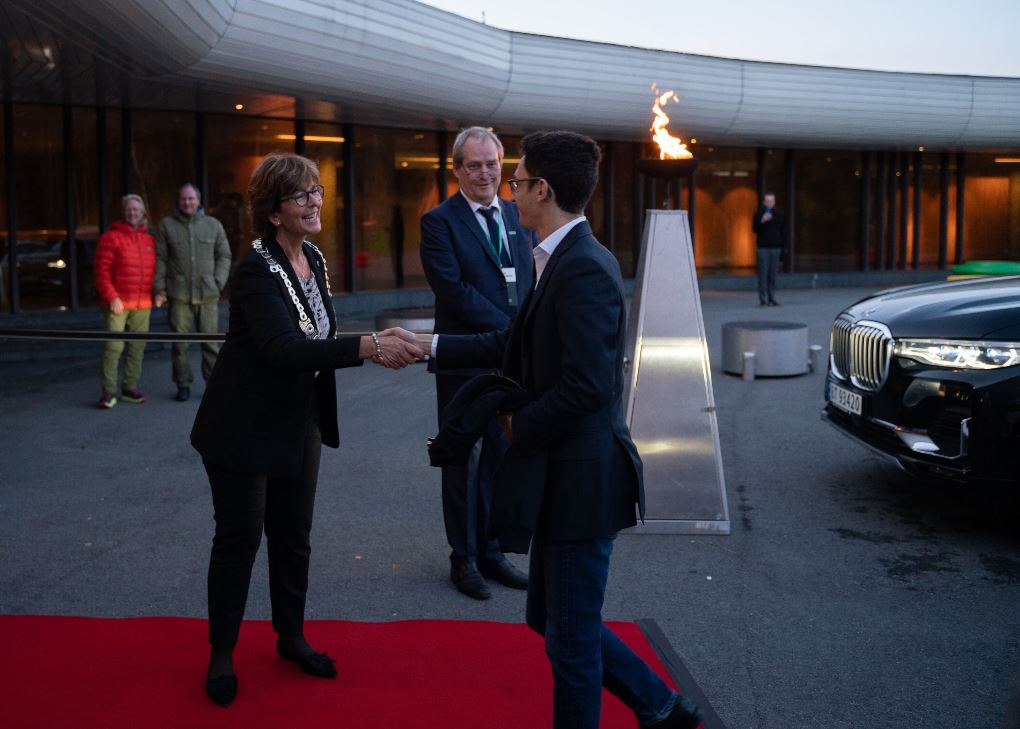 Magnus Carlsen and Fabiano Caruana infamously drew all 12 classical games of their World Championship match in London, but there was to be no repeat in this Fischer Random match. Magnus started with the white pieces and Fabiano opened with 1…f6, but it was soon Black who took over:

24…Qe5! (exploiting the weak white back rank) 25.Qc1 Qg7 26.Bxg6 Qxg6 27.Qxc4 and Black was up a piece for two pawns. When the position was simplified into an ending White’s hopes lay in the fact that he had 3 connected passed pawns against a knight… and that the player with White was Magnus Carlsen! In the end neither factor proved enough, however, with Fabiano sealing victory with a nice trick he could also have played earlier:

48…Ng6! and Carlsen resigned. The point is that after 49.fxg6+ Black plays 49…Kg7 and the white pawns have been stopped while Black will queen on the other side of the board. 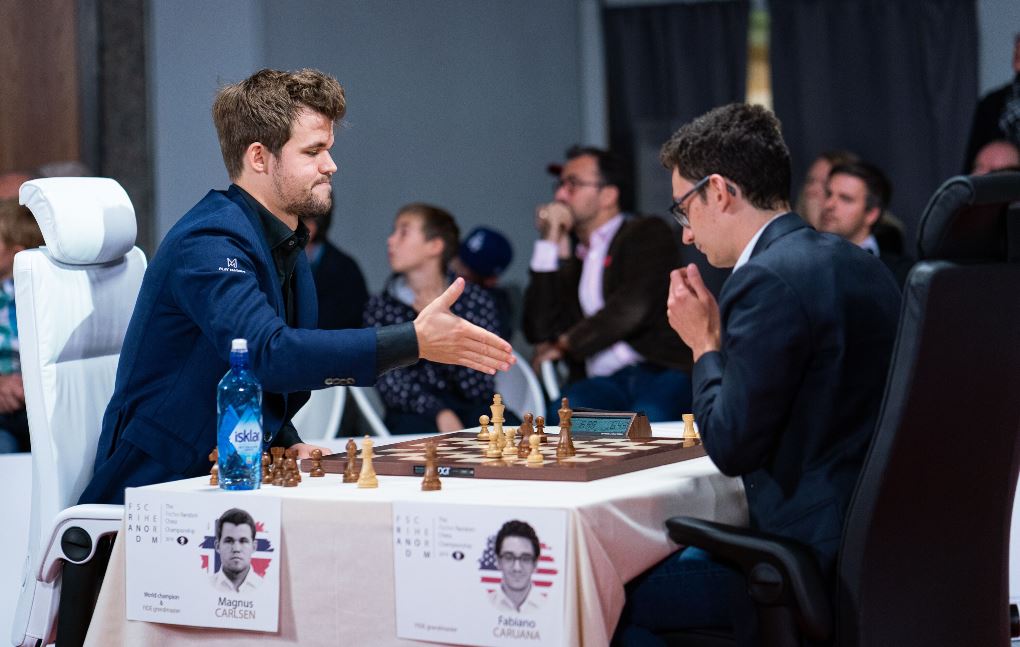 The 3 points for a win gave Fabiano a significant advantage in the match, and the return game seemed to be going his way as well when he got a nice advantage out of the opening. It fizzled out fast, however, and the complicated rook ending would ultimately go the way of the World Champion. 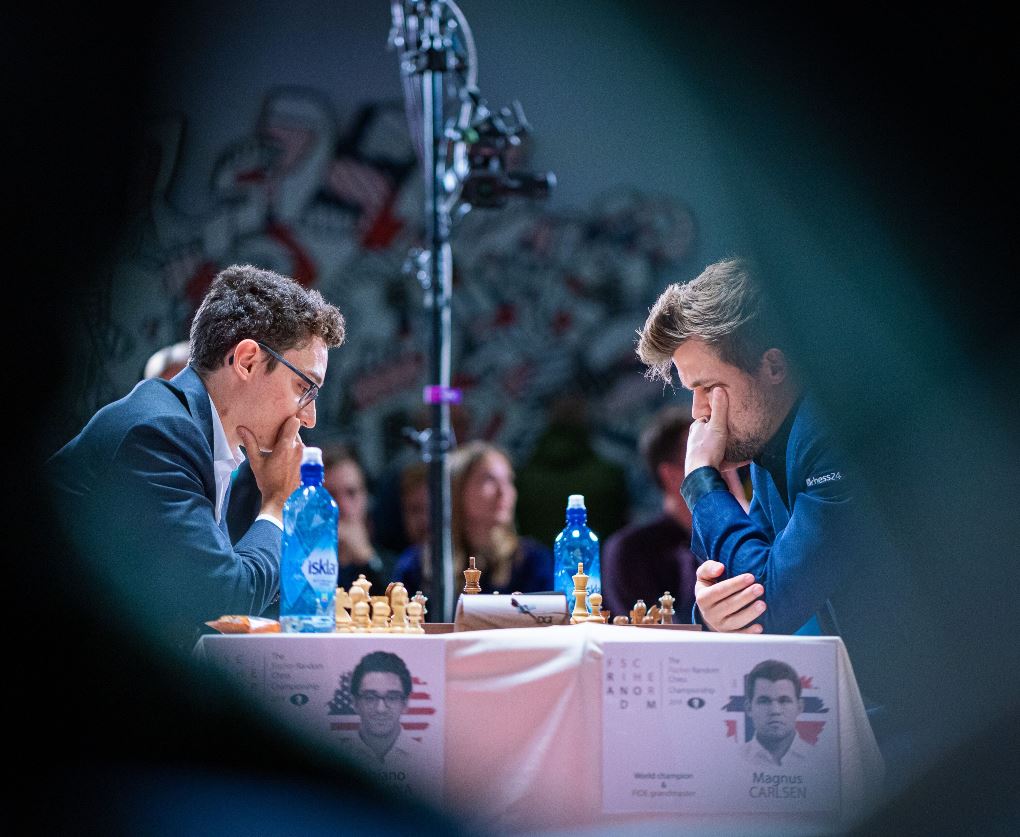 How complicated it was became clear when Ian Nepomniachtchi was in the studio and felt it was White still pushing for a win:

In fact White is objectively doomed whatever he does here, though after 43.Rh4 computers tell us 43…c5! was winning for Black while 43…b5, as played, was only a draw. It didn’t matter, however, since Caruana’s 49.Rd6 was the last mistake:

After 49…c2 50.Rb6 Kd2 51.Rd6+ Kc3 White resigned, since the black king will find shelter on b2 and the c-pawn queens. That meant it was all-square in the match between the world numbers 1 and 2. 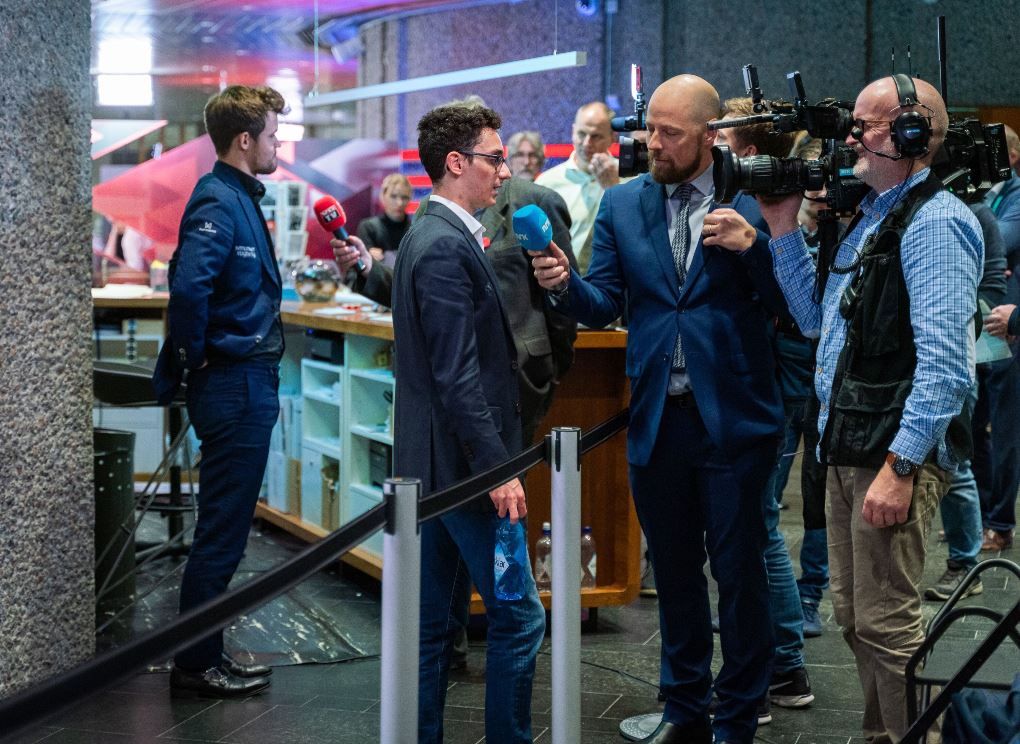 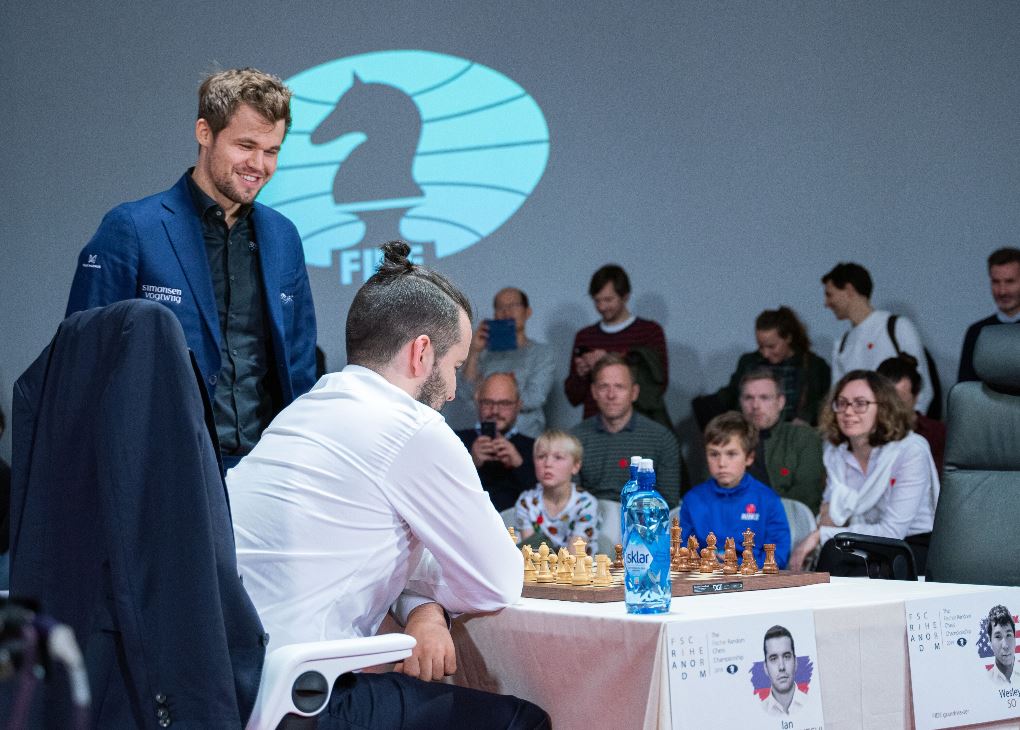 There may have been draws in the two games between Ian Nepomniachtchi and Wesley So, but they were if anything even more exciting to watch. Nepo was kicking himself afterwards for his decision on move 14 in the first game, when he felt he had a huge advantage:

The move to keep that advantage was 15.0-0-0! (the king stays where it is and the a1-rook moves to d1), but instead he went for the “not so logical” 15.Rd1, later commenting, “of course you should make the most natural move – chess punishes you for being such a patzer!” 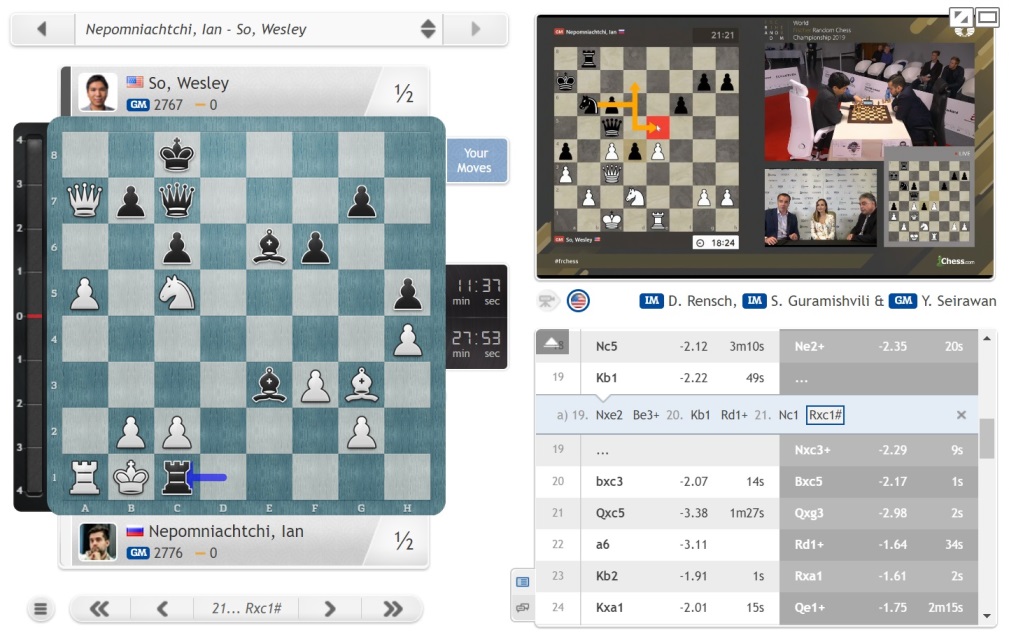 After 22.a6! Rd1+ (22…Kd7!! was stronger, but you need nerves of steel to leave the a-pawn alive like that) Ian managed to reach a technical ending with drawing chances, but even after managing to force a perpetual he confessed, “You are not going to save this endgame every day”. 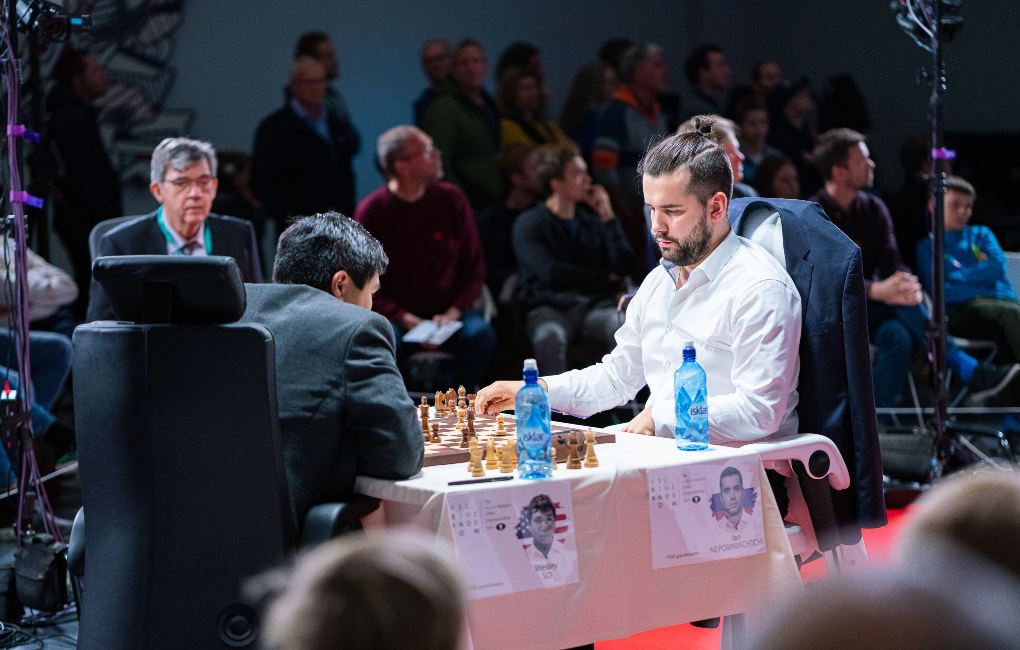 The second game followed a similar scenario as Nepomniachtchi said he “had some nice flow” as he took over with the black pieces, but Wesley was again eagle-eyed when it came to tactics. He sacrificed his e-pawn to give his queen a route to f5 and made no mistake when Ian responded 31…g6: 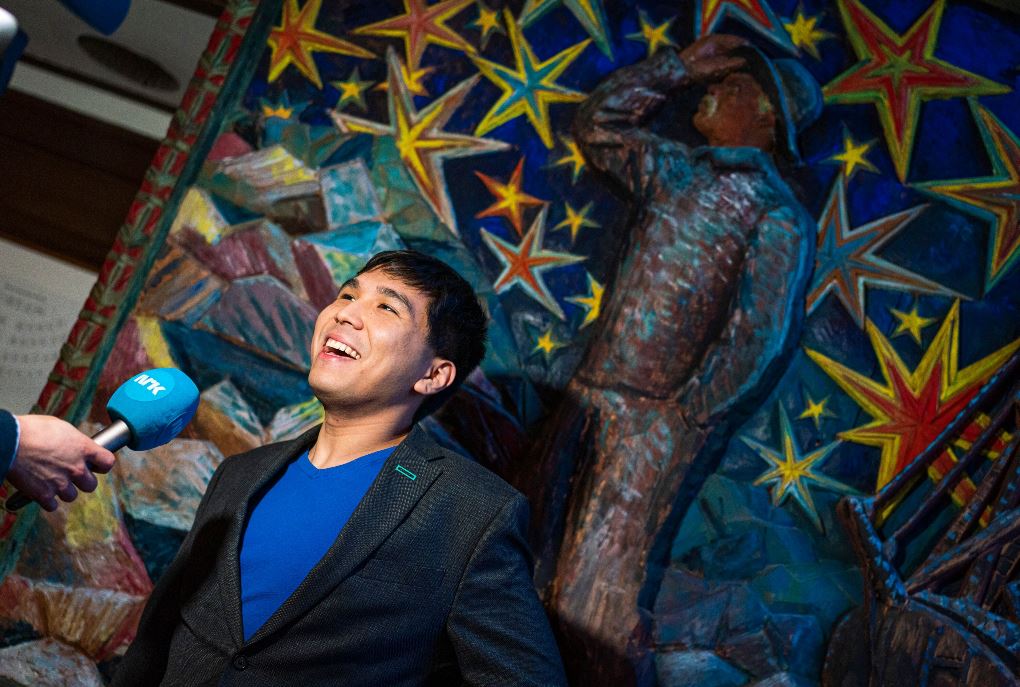 Wesley So looked to be inspired by the artwork in the Henie Onstad Art Center | photo: Lennart Ootes, official website

Ian Nepomniachtchi was nothing if not objective about how the day had gone: 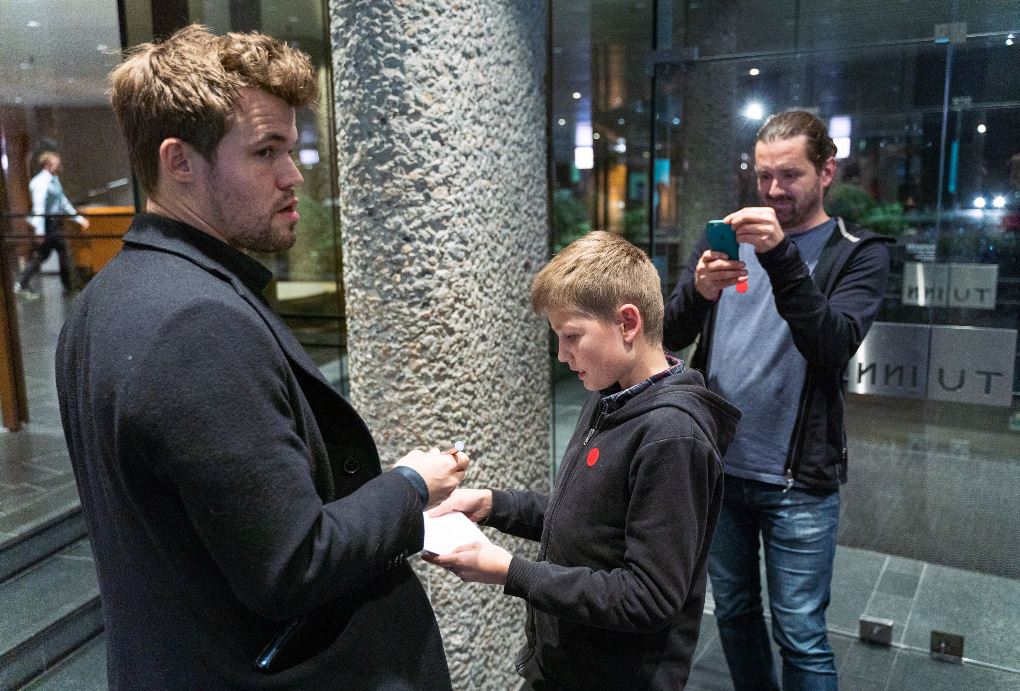 That means that both matches are still perfectly balanced going into Monday’s two remaining 45-minute games, with the action starting at 17:30 CET. You can follow all the action live here on chess24!