Candidates' battle goes to the wire in Jerusalem

Maxime Vachier-Lagrave’s bid to qualify for his first ever Candidates Tournament - and therefore a chance to play a match against Magnus Carlsen - reaches its climax in the final FIDE Grand Prix that starts today in Jerusalem. The French no. 1 leads Shakhriyar Mamedyarov by 3 GP points and Ian Nepomniachtchi by 4, but especially if Maxime loses early anything could happen. Ten of the players in the event still have a chance of qualifying directly for the Candidates, with 2 of the players who had nothing to play for – Teimour Radjabov and Levon Aronian – having pulled out on medical grounds. 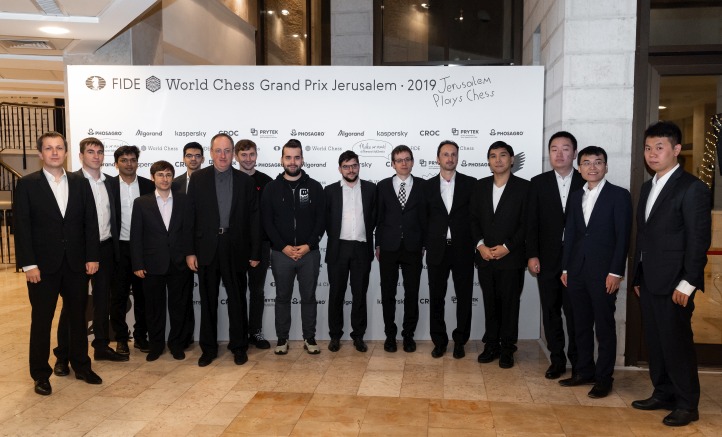 Can you spot which of the 16 Jerusalem Grand Prix players is missing? | photo: World Chess/FIDE

After the previous Grand Prix events that were held in Moscow, Riga and Hamburg the final FIDE Grand Prix is about to begin in the Notre Dame of Jerusalem Center.

The pairings have already been announced, with one curiosity being that in Round 1 Maxime Vachier-Lagrave again faces Veselin Topalov, a player he knocked out in the 2nd round in both Riga and Hamburg:

The line-up in Jerusalem has undergone some changes. Boris Gelfand was supposed to be the one wild card after his victory in the Netanya Masters earlier this year, but instead we have three! Teimour Radjabov and Levon Aronian, who were both on 0 points and had essentially nothing to play for, have pulled out on medical grounds, with Russia’s Dmitry Andreikin and China’s Wang Hao replacing them.

Dmitry Andreikin may still have a hugely unlikely path to the Candidates. If he won the event in Jerusalem, including winning some matches in classical chess for a one point bonus, he could theoretically still finish in 3rd place in the series overall and qualify for a match tournament to decide the Russian wild card spot in the Candidates in Yekaterinburg. That also means that Dmitry Jakovenko, currently on 0 points after two Grand Prix events, still has a very small chance of the Candidates. 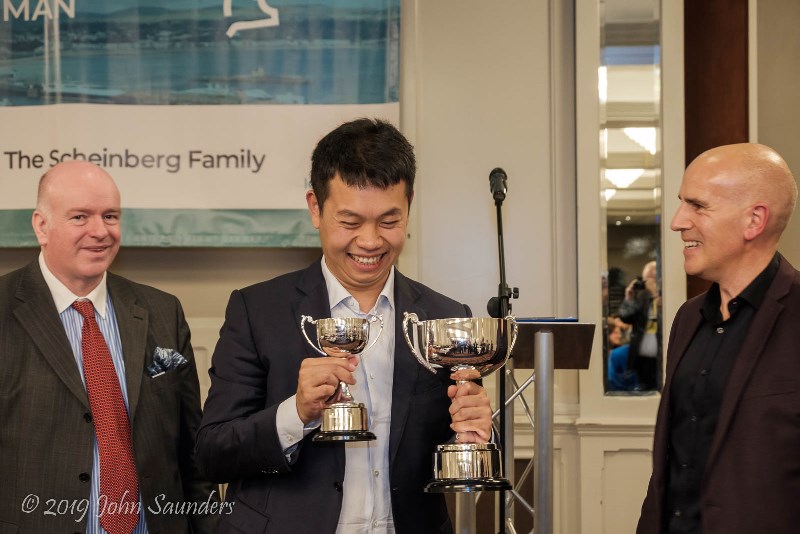 After winning the Grand Slam, Wang Hao needs nothing from the Jerusalem Grand Prix, but some more experience playing the current elite will do no harm before next year's Candidates | photo: John Saunders, official website

Wang Hao has of course already qualified for the Candidates by winning the Grand Swiss, and is now up to world no. 12 on the live rating list after his recent run of form. That included playing and remaining unbeaten in all 22 rounds of this year’s Chinese League, where he beat the likes of Andreikin, Malakhov, Naiditsch and Li Chao. He could still affect who he’ll play in the Candidates.

Grischuk not quite confirmed

Alexander Grischuk doesn’t play in Jerusalem but is all but guaranteed a place in the Candidates Tournament. After the pairings were announced the only remaining scenario where he wouldn’t qualify is if the tournament ended in a final between MVL and Mamedyarov in which Shakhriyar emerged as the winner. Even that alone wouldn’t be enough – Maxime would have to win his first three matches without needing tiebreaks, while Shakh needs to win 2 of his 4 matches without tiebreaks.

The real battle is for the second place in the Candidates Tournament, and the outcome there is impossible to predict. Here are the Grand Prix standings going into the final event, with the players in capital letters still in with a chance of the Grand Prix Candidates spots:

During the London Chess Classic Maxime Vachier-Lagrave put his odds of qualifying for the Candidates at around 50%. His current score means he’s the one player with the luxury of knowing that even a Round 1 defeat leaves him with reasonable chances of qualifying for the Candidates. To overtake him Shakriyar Mamedyarov and Ian Nepomniachtchi would still have to win at least two matches, while if Maxime does win some matches the barrier of course gets higher. We could be on course for a hugely important MVL vs. Nepomniachtchi semi-final, but even in that case Nepo would still need to win the final to surpass MVL. Of course the Frenchman’s nightmare scenario is that the final is fought between Nepomniachtchi and Mamedyarov. 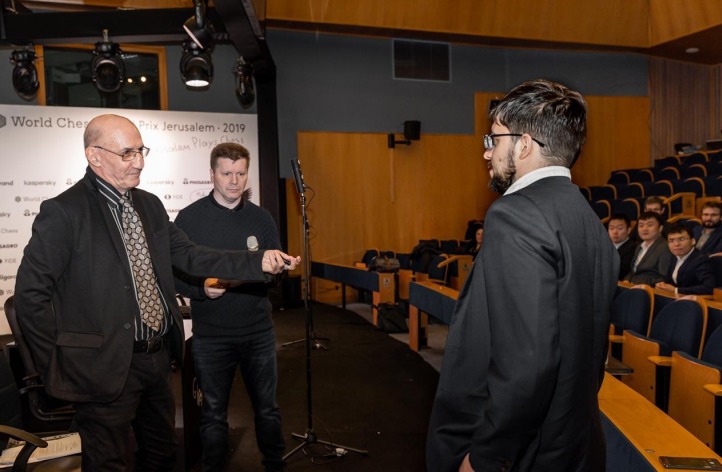 No-one deserves to qualify for the Candidates more than MVL, who just missed out by rating and in the World Cup, but it all comes down to the final Grand Prix | photo: World Chess/FIDE

MVL himself went into more detail on his own website:

But what’s rather funny is that as far as the qualification for the Candidates is concerned, it doesn’t really change much whether I’m eliminated in the first round in Jerusalem, or whether I make the semi-finals! If Mamedyarov or Nepo go far, I better go far too. Otherwise, I can still score 0 and qualify. The difference in percentage of chances of qualifying between losing in the first round and going to the semi-finals may climb from 40 to 80%, whereas we have the impression that it should be from 20 to 100%! Finally, it should not be forgotten either that all players who have between 1 and 5 points in the overall ranking still have a theoretical chance to qualify, certainly infinitesimal for the former!

There’s a chance for a dark horse to emerge, since up to 12 points are available for winning the Jerusalem Grand Prix (8 points for 1st place + 4 bonus points for winning all matches in classical chess). That means that even the players on 1 point, Sergey Karjakin and David Navara, could qualify for the Candidates with overall victory, but they would have to hope that not only MVL but also Nepomniachtchi and Mamedyarov fail.

Anish Giri has no mathematical chance of qualifying for the Candidates via the Grand Prix, but it doesn't matter since he's already qualified by rating!

In short, it’s going to be a fascinating battle that will soon become much clearer, since as in all these knockouts half of the field will already be going home by Friday. Tune into all the action live here on chess24 from 14:00 CET!