Humpy Koneru took her lifetime score against Alexandra Kosteniuk to 5:0 in decisive games after squeezing out a win from a drawish knight ending in Round 6 of the Cairns Cup. The day’s other winner was 16-year-old Carissa Yip, who made it two wins in a row after punishing Valentina Gunina for playing Alekhine’s Defence and then grabbing one pawn too many. The other games were drawn, though Mariya Muzychuk came close to steamrollering Irina Krush. 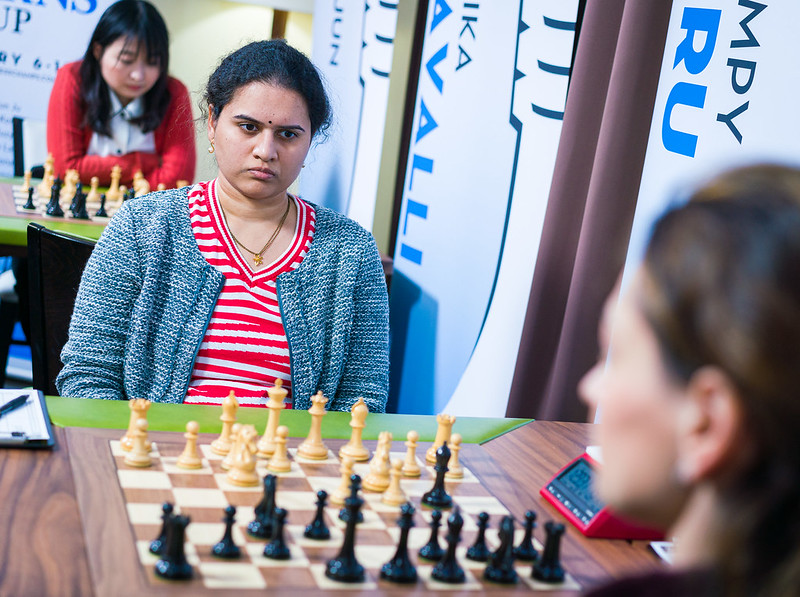 After a loss in Round 2 Humpy Koneru has fought her way back into the lead | photo: Lennart Ootes, official website

Humpy Koneru has become the scourge of the leaders of the Cairns Cup after following taking down sole leader Nana Dzagnidze in Round 5 by handing a second loss of the event to co-leader Alexandra Kosteniuk in Round 6. The Indian women’s no. 1 gained a structural advantage when queens were exchanged, but that had gone when the players traded down into a knight ending:

Humpy felt that if her opponent played 34…Kc6! it would only have been a draw, but after 34…Nb6!? the white king was able to infiltrate and win the a7-pawn. There were still chances to defend after that, but it was an uphill struggle and Humpy went on to win in 61 moves. 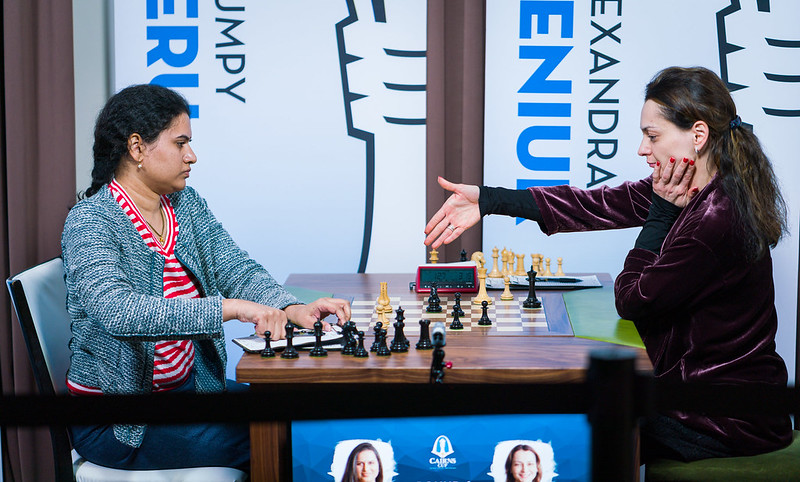 That saw her leapfrog Alexandra into the joint lead. 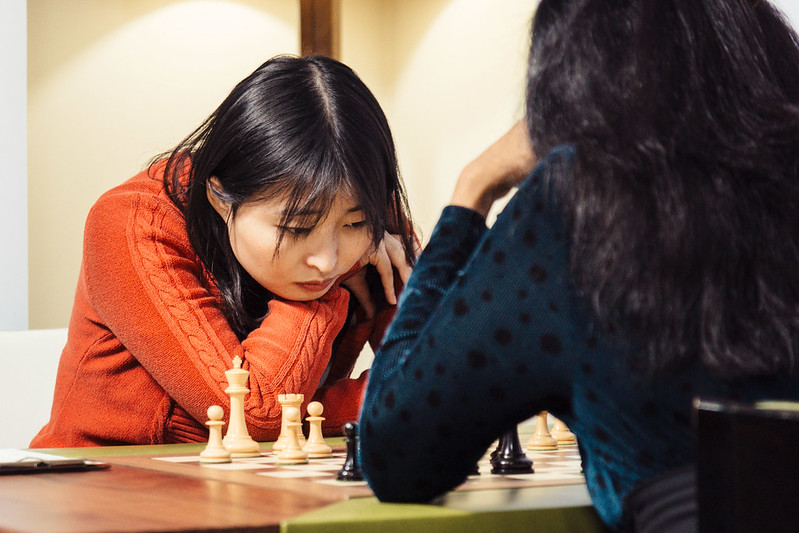 Women’s World Champion Ju Wenjun is the other leader, after a quiet draw against Harika Dronavalli. When Ju came to the studio after the game she barely mentioned her own game as all the focus was on Carissa Yip’s clash with Valentina Gunina. Action was all but guaranteed early on when Valentina met 1.e4 with Alekhine’s Defence, 1…Nf6. By move 10 the players had left theory…

“Don’t judge me, Alejandro!” said Carissa afterwards when she revealed she’d completely overlooked that her opponent could play 16…0-0-0!? here, while the US youngster also didn’t believe her opponent would grab another pawn with 17.bxc3 dxc3 18.Bxc3 Qxc3 19.Rc1 Qxa3. 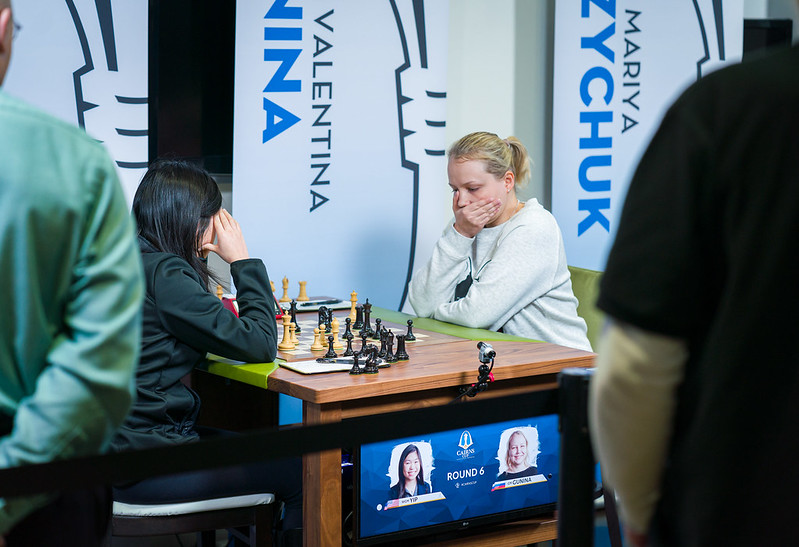 Black had done nothing wrong, but Valentina began to lose the thread and finally overstepped the mark on move 26:

It was time to switch to defence with 26…Nc8!, preparing Qa7, since after 26…Qxc4? 27.Qa3! Rhd8 28.Qa7+! Kc8 29.Raa1! (other moves lose) White had protected against any mating threats and declared the hunting season open against the black king. Valentina burnt up almost all her time on the next move and found herself once again playing on increment in an extremely difficult position to defend.

Chances were missed for both sides, but it was Gunina balancing on a precipice and finally falling in on the time control move:

40…Qb4! was the last chance to try and put up resistance, while after 40…Qa1+? Black’s defences were overwhelmed, with Valentina playing on longer than strictly necessary:

Carissa said afterwards when asked if she was feeling confident for the remaining games, “not really confident, just more relieved that I’m not playing so bad anymore”.

The 16-year-old is now only in joint last place after catching Valentina Gunina and Irina Krush on 2/6. Irina might easily have sunk without a trace against Mariya Muzychuk, since she admitted being outplayed in the opening and middlegame and was merely trying “to stay alive”. Perhaps the moment things slipped for Mariya was around move 22:

22.c6! Qc7 23.Nc5! was a very tricky way to keep a grip on the position, but 22.Nb6! was also good. The problem was that the follow-up 22…Bf6 23.Nxa8!? delighted Irina, who had been able to swap her problem bishop for White’s marauding knight. Many more turning points would follow, but in the end Mariya was left with an extra pawn that had no impact in an opposite-coloured bishop ending. 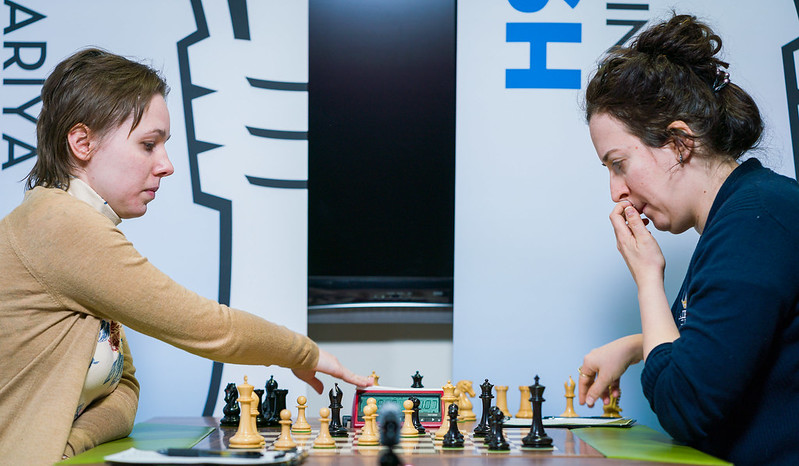 Lagno-Dzagnidze was a draw featuring none of that excitement, which left the standings as follows with three rounds to go:

Women’s world numbers 2 and 3 Ju Wenjun and Humpy Koneru have the black pieces in two of their remaining three games, with Ju Wenjun Black against Nana Dzagnidze in Round 7 while Humpy Koneru is Black against Irina Krush. Don’t miss all the action live here on chess24 from 20:00 CET!