Women’s World Champion Ju Wenjun surived a tricky position against Valentina Gunina before going on to score her first win of the 2020 Cairns Cup. The other player to win in Round 4 was Alexandra Kosteniuk, who bounced back from her loss the day before to beat Carissa Yip. The 16-year-old once again put up a good fight only to ultimately collapse against her much more experienced opponent. The draws in the remaining games saw Nana Dzagnidze retain the sole lead. 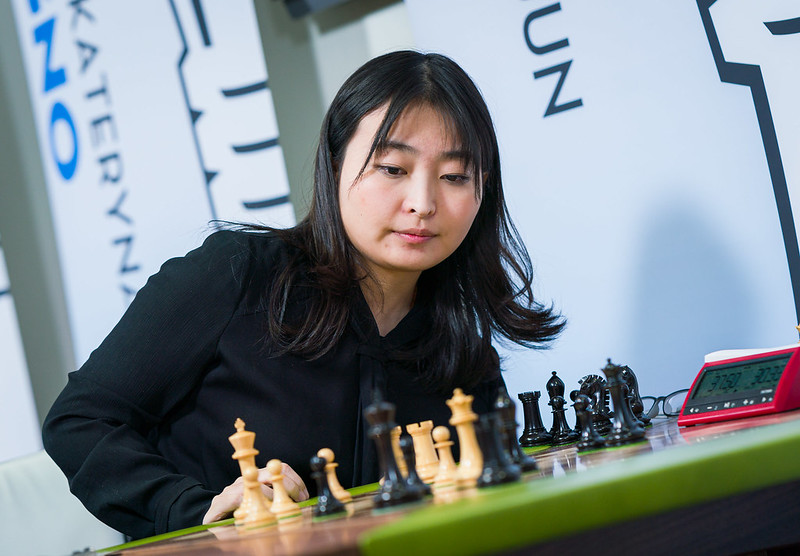 We never got to learn whether Valentina Gunina got what she was hoping for and woke up at 7am after waking up at 5am and 6am for the first three rounds, but she didn’t play the start of her game against Ju Wenjun as if she was suffering from jet lag. Black gained the bishop pair and a palpable edge, but Valentina then allowed Ju to manoeuvre her knight to d5 and rashly grabbed the b2-pawn. 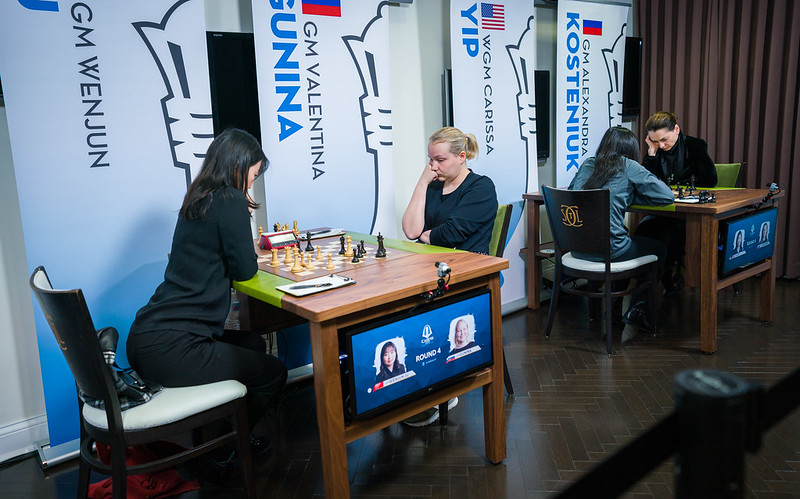 38.Qf6! was the moment when it was clear the World Champion was going to pick up her first win:

The dual threats of Qxb2, and Bh6 and a quick mate, left nothing better for Black than giving up the exchange with 38…Rxd2 39.Rxd2 Kh7 40.Rad1 Rg8 41.Rd8. Valentina had made the last half dozen moves with seconds to spare, but now that adrenaline had worn off the assumption was the game would quickly end in resignation:

Curiously it actually ended up being the longest of the day, as Valentina fought on with 41…Qe2! 42.Kh2 Rg7! 43.Ra1 Ba2! Ju Wenjun was forced to keep calculating, but despite one repetition of moves she didn’t put a foot wrong and finally wrapped things up after 54…Kg7:

That took Ju Wenjun into a 5-player pack of players on 2.5/4, just half a point behind the leader Nana Dzagnidze. One of those chasing players is Mariya Muzychuk, who couldn’t squeeze anything out of her game against Dzagnidze. Another is Harika Dronavalli, who was in danger of getting outplayed exactly the same way she’d outplayed Kosteniuk the day before, until Irina Krush went for 32…Rb5:

33.Rxd4!, attacking the b5-rook, eliminated Black’s pride and joy, with a draw agreed on the spot rather than the game continuing with exchanges after 33…Rxc5. 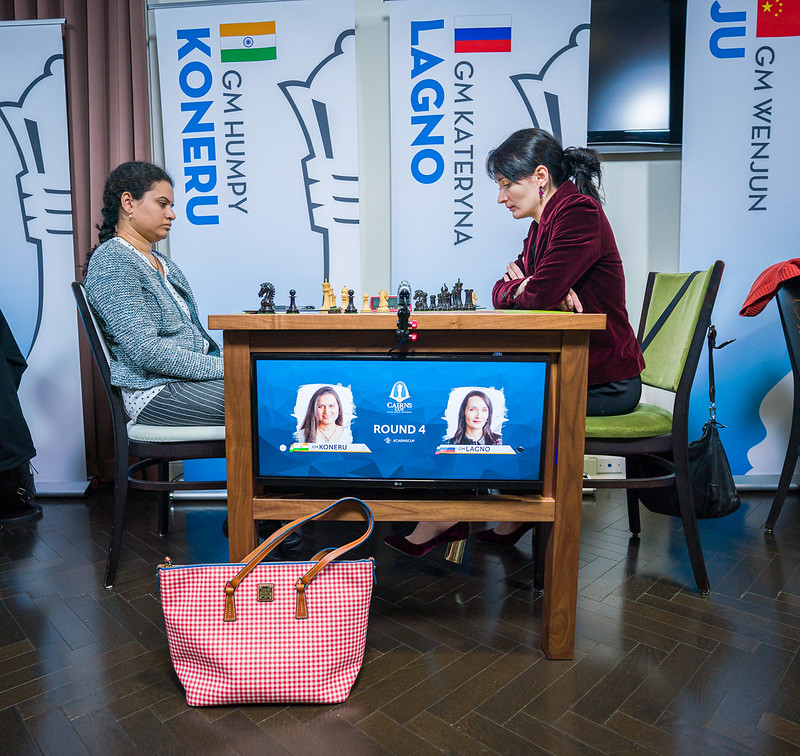 Kateryna Lagno is also in the chasing pack after 19 moves of Grünfeld Defence theory ensured her an easy draw against Humpy Koneru. The last player to enter the tie for second is Alexandra Kosteniuk, who made it four losses in four games for 16-year-old Carissa Yip. 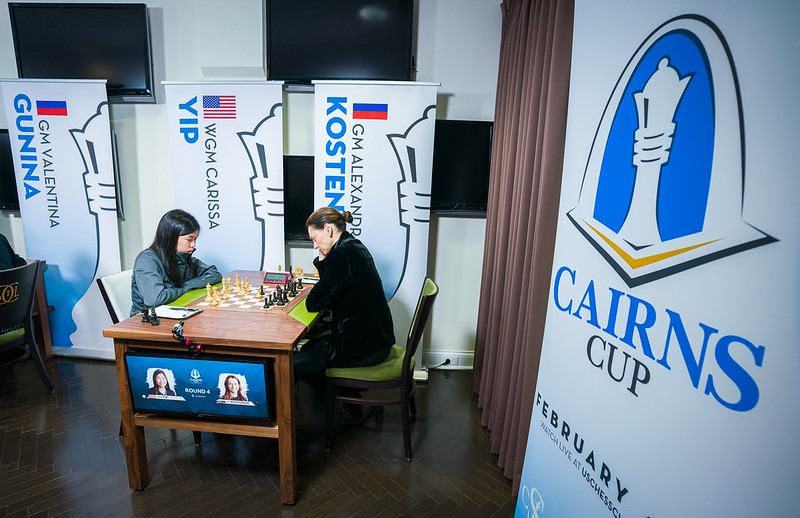 Carissa Yip is getting a crash course in what it takes to be a grandmaster | photo: Lennart Ootes, official website

“Probably she tried to play like Magnus”, said Alexandra. She was referring to a manoeuvre Magnus Carlsen played against the Petroff of Alexei Shirov as the World Champion went on to score a fine win in the Grand Swiss last year. 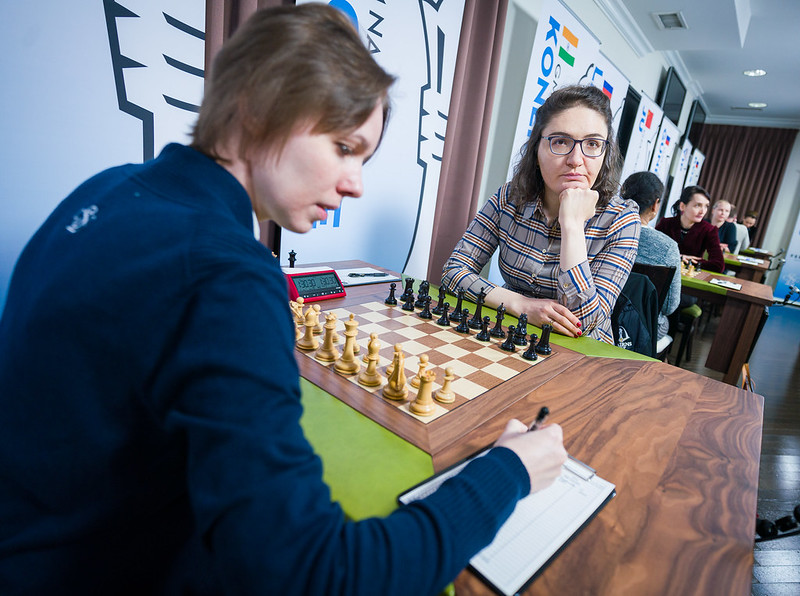 That leaves the standings after Round 4 as follows:

On paper Carissa Yip’s best chance to start scoring in the Cairns Cup comes on Tuesday against Irina Krush, though she has the black pieces. Who will go into the rest day as the leader will be decided in Dzagnidze-Koneru, Lagno-Ju, Kosteniuk-Muzychuk and Gunina-Harika. Don’t miss all the action live here on chess24 from 20:00 CET!