Nana Dzagnidze took the sole lead after three rounds of the 2020 Cairns Cup as she inflicted a 3rd loss in a row on 16-year-old Carissa Yip. Harika Dronavalli joined Kateryna Lagno and Mariya Muzychuk half a point behind after a surprisingly easy win over Alexandra Kosteniuk, while Valentina Gunina turned the corner after two losses by beating Irina Krush. She said afterwards that she’d had to try and bribe her brain with the prospect of coffee and cookies to get it to keep working despite jet lag! 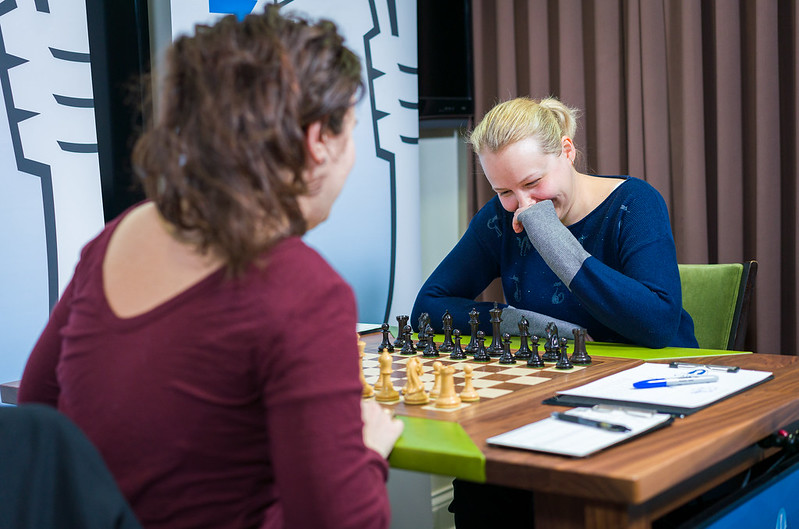 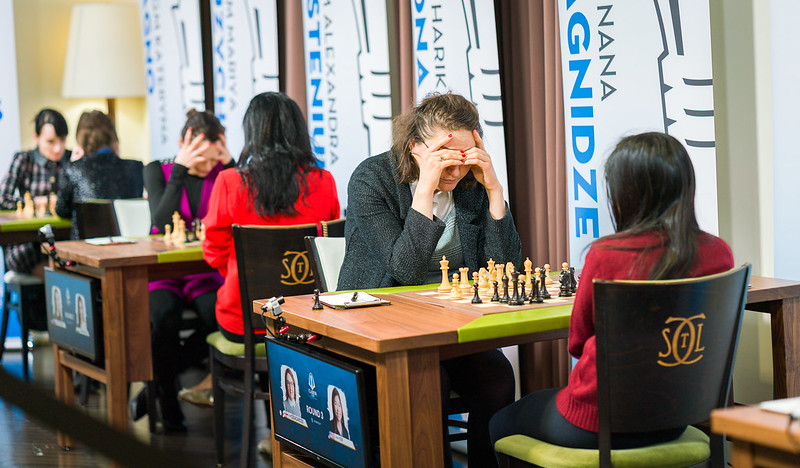 Nana Dzagnidze was the latest top player to beat Carissa Yip, though time trouble made it a lot closer than it looked | photo: Lennart Ootes, official website

Georgia’s Nana Dzagnidze plays the top four seeds in Rounds 4-7, but she faces that murderers’ row as the sole leader, after beating Carissa Yip to reach 2.5/3. Their Round 3 game had looked like being short and not so sweet for Carissa after the young American played the Hippopotamus Defence, a choice usually reserved for must-win situations:

Soon White had an overwhelming advantage, but Nana herself became overwhelmed with the options available to her, later lamenting, “somehow I couldn’t make a move”. She got into deep time trouble, and win after win was missed:

25.Nxh5! was a free pawn, since after 25…gxh5 26.Qd3! mate is unstoppable, while if the rook tries to run with 25…Re8 White can even go for the beauty prize with the queen sacrifice 26.Qxd7!!. Instead after 25.Bxf8, played with 4 seconds to spare, Carissa, who still had 8 minutes on her clock, had real chances of escaping. Alas, the youngster could never quite equalise fully and Nana forced a much better ending that became clearly winning on move 40. The players only played on for a few moves more. 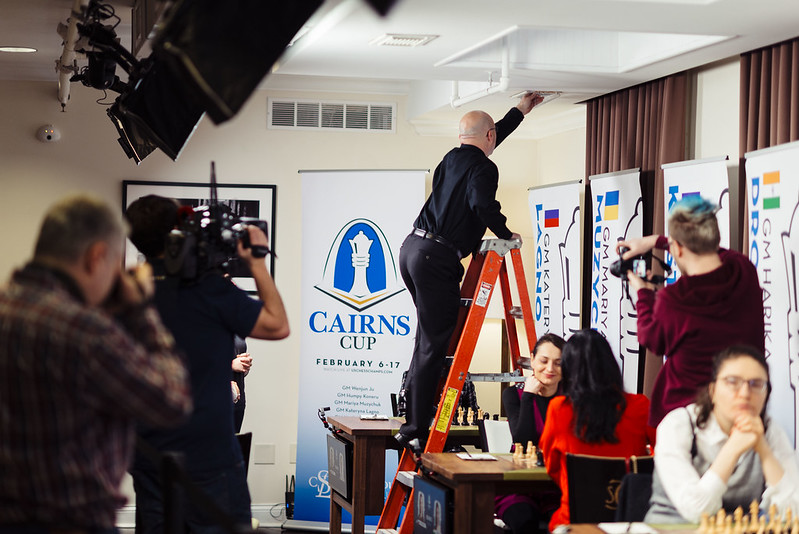 All the cameras were focused on a dramatic moment with arbiter Chris Bird :) | photo: Austin Fuller, official website 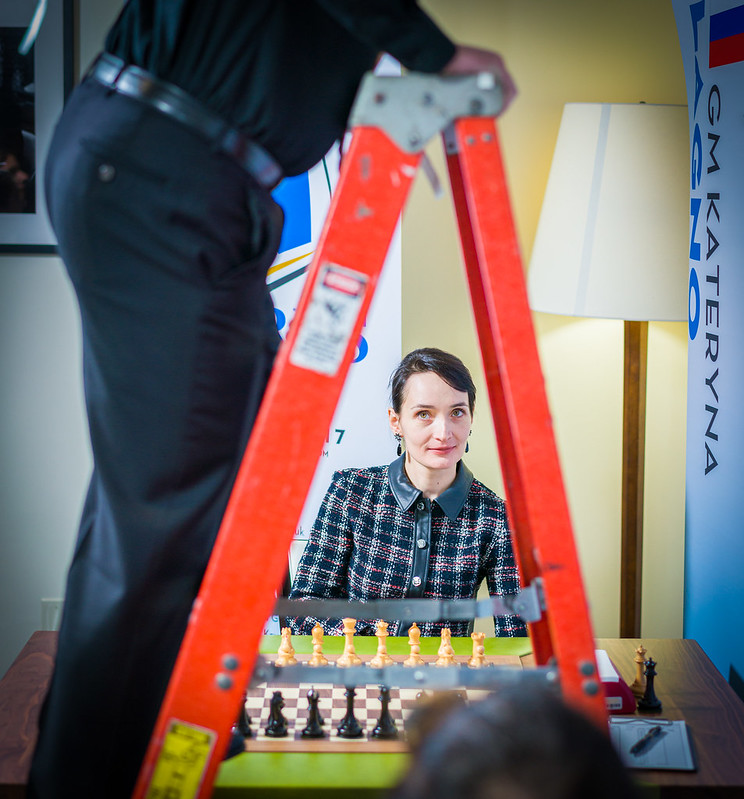 The only game where we didn’t get such drama was Humpy Koneru vs. Ju Wenjun, with the two heavyweights cancelling each other out in 22 moves. The other draw, Lagno-Muzychuk, was a thriller. Mariya Muzychuk surprised her opponent by not knowing some essential Petroff theory, but Kateryna Lagno then burnt up time herself and had the feeling something had gone wrong: 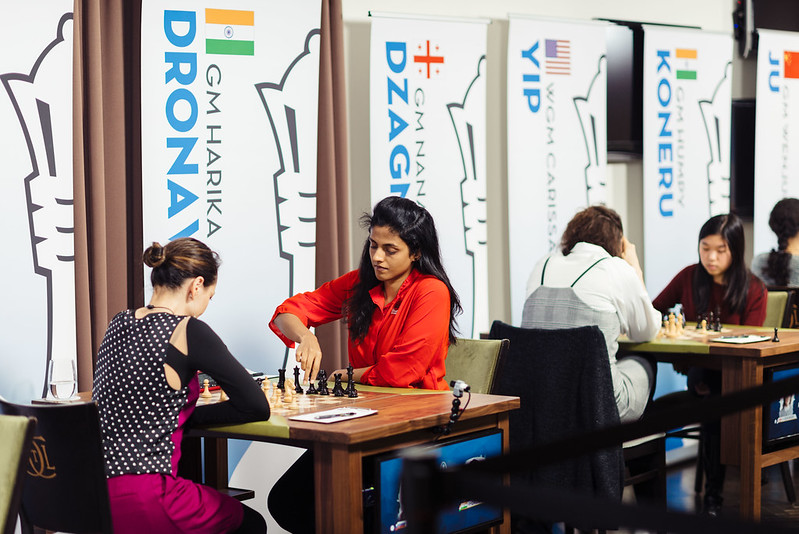 White is hanging on by the skin of her teeth, but simply trading everything off with 30…Nxd3 31.Rxd3 Bxd2 32.Qxd2 Rde6! left White with a hopeless position. f3 was later met by f5, winning a pawn, and White was doomed to defeat. 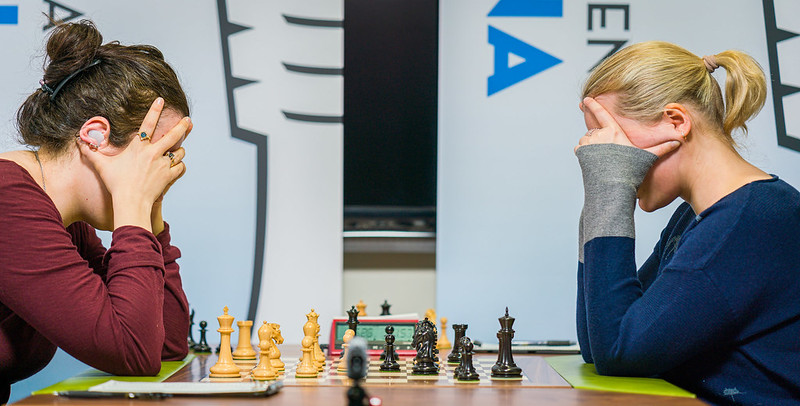 That leaves Krush-Gunina, which defending champion Valentina Gunina went into on the back of two defeats. She said afterwards:

I was watching a motivational movie today - it’s Million Dollar Baby, about a women’s boxer. At least I got zero points, not knocked down in a corner!

She also revealed that for the first two rounds she’d woken up at 5am, while the jet lag was slightly less of an issue for Round 3 – she woke up at 6am! The game looked like it might be another knockout blow until Irina Krush began to lose the plot:

Valentina pointed out that after 28.Bb6! White would be slightly better after multiple exchanges. Instead Irina played the strange 28.Bf1!? and a few moves later simply failed to defend the a-pawn, with more pawns dropping before the time control. Valentina made no mistake in the technical phase, though it hadn’t been easy:

At some point my brain just stopped and ok, I just say something like, “ok, just please one more, you need to work and after I will give you coffee, cookies!”

That left Gunina level with Krush on 1/3, while Nana Dzagnidze is leading on 2.5/3: