Valentina Gunina played the move of Round 2 of the Cairns Cup in Saint Louis only to go on to lose a second game in a row, this time to her Russian compatriot Alexandra Kosteniuk. There were also impressive wins for Mariya Muzychuk, who ensured Humpy Koneru’s stay as women’s world no. 2 was short, and Kateryna Lagno, who whipped up a mating attack against 16-year-old Carissa Yip. Four players lead after Round 2. 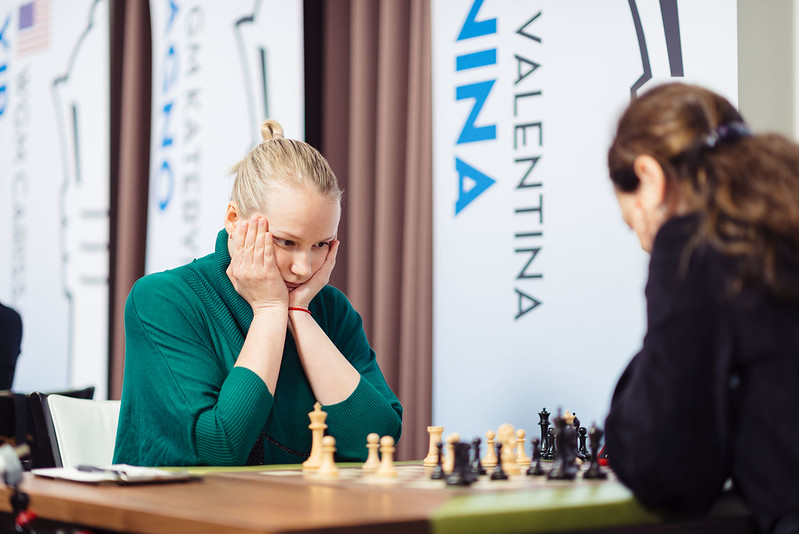 You can replay all the games from the 2020 Cairns Cup using the selector below – click on a result to open the game with computer analysis:

And here’s the day’s commentary from Yasser Seirawan, Jennifer Shahade and Alejandro Ramirez:

There was no doubt about the move of the day in the Cairns Cup, with Valentina Gunina exploiting both some strange queen manoeuvres by Alexandra Kosteniuk and the fact that the knight on d7 is pinned: 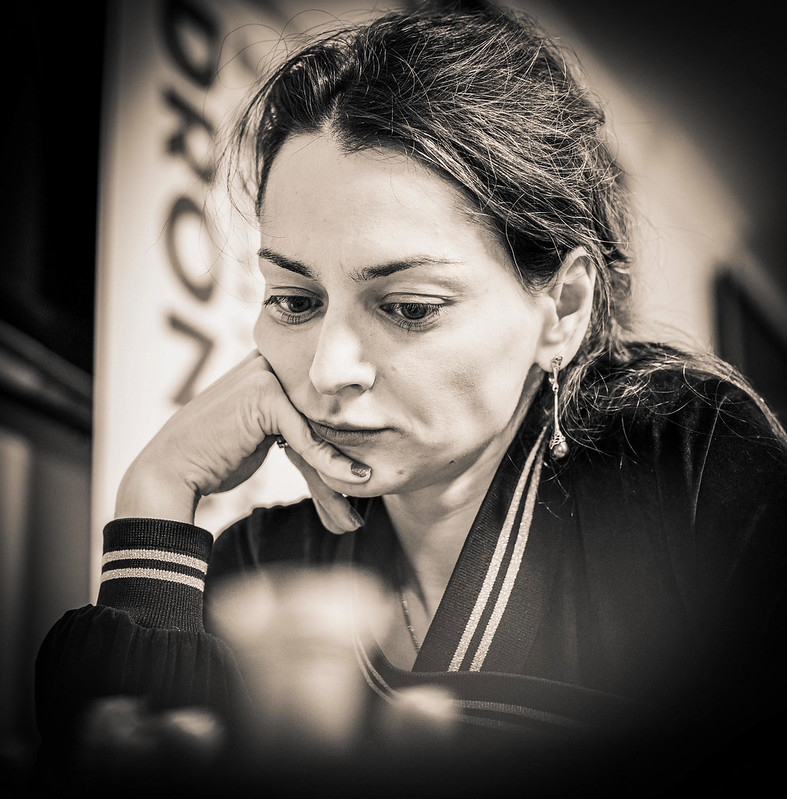 Alexandra Kosteniuk did incredibly well to refocus and go on to win the game | photo: Lennart Ootes, official website

Mistakes were made and Kosteniuk ultimately took over, but for a second day in a row Gunina could still have saved herself in desperate time trouble:

This time 37.Qe3! was the move to draw, when after the forced 37…Rxf2+ 38.Kh1! it seems the threat of White pushing the b-pawn means that Black has nothing better than forcing a draw by perpetual check. 37.Qe6+ also seems to draw, for far less obvious reasons, but Valentina was again playing on increments and played the losing 37.Qe8+ with 1 second to spare. After 37...Kh7 it was already too late to return to the Qe3 idea as White needs to have the check on e8 in reserve. The game ended by the time control: 38.f3 Rxa4! 39.f4 Ra2+! 40.Kf3 Ne1+! 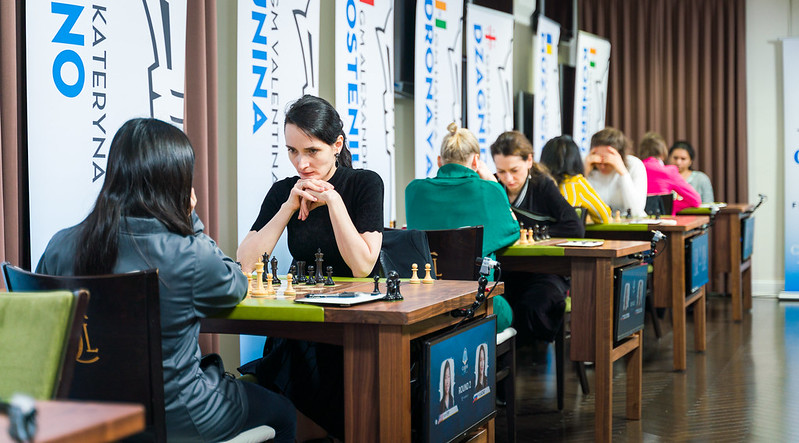 The day’s other two wins were much more one-sided. Kateryna Lagno considered this a “teachable moment” for 16-year-old Carissa Yip:

Kateryna said she would have thought long and hard before trying the weakening 19.b3!? here, and probably rejected it in favour of the solid 19.Rab1, while Carissa spent just 45 seconds and only sank into a 20-minute think after 19…Rbd8. It was remarkable how fast White’s position went downhill after that, with Black generating an unstoppable mating attack in what had looked a quiet position:

Kateryna noted afterwards that she wasn’t suffering from jet lag and in fact her husband Alexander Grischuk told her just to enjoy herself and treat playing a tournament as a holiday from the four kids at home! 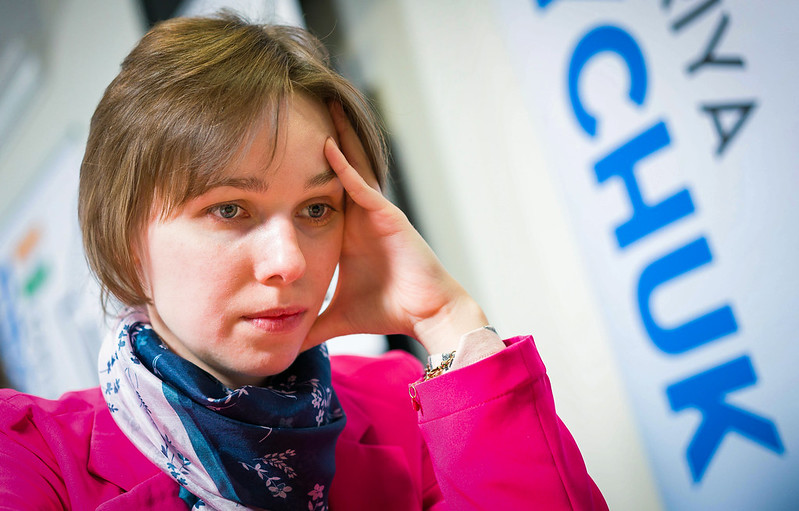 Mariya Muzychuk said she liked reading Mikhail Tal's books when she was young, and this was a game the 8th World Chess Champion would have been proud of | photo: Lennart Ootes, official website

The final win was perhaps the most impressive, since former Women’s World Champion Mariya Muzychuk cut Humpy Koneru’s stay as women’s world no. 2 short in spectacular fashion! She met the Petroff Defence with a Rb1-b4-f4 rook swing and then went for what she called a half-intuitive, half-calculated pawn sacrifice:

After 17.g4! Qxh4 18.Qg2 the inhuman-looking 18…Qg5! may have been the only move to draw, with the computer at least initially finding nothing better for White than a draw by repetition after 19.Ra4 Qh4 20.Rf4.

Instead after 18…Qe7 19.gxh5! Bxh5 Mariya had rightly judged that the opening of the h-file would be fatal for the black king. She calculated the final blows crisply:

Nana Dzagnidze joined Muzychuk, Lagno and Kosteniuk in the lead on 1.5/2 after a well-played draw against Harika Dronavalli, while the day’s other draw featured a chance for Irina Krush to take down the Women’s World Champion Ju Wenjun. 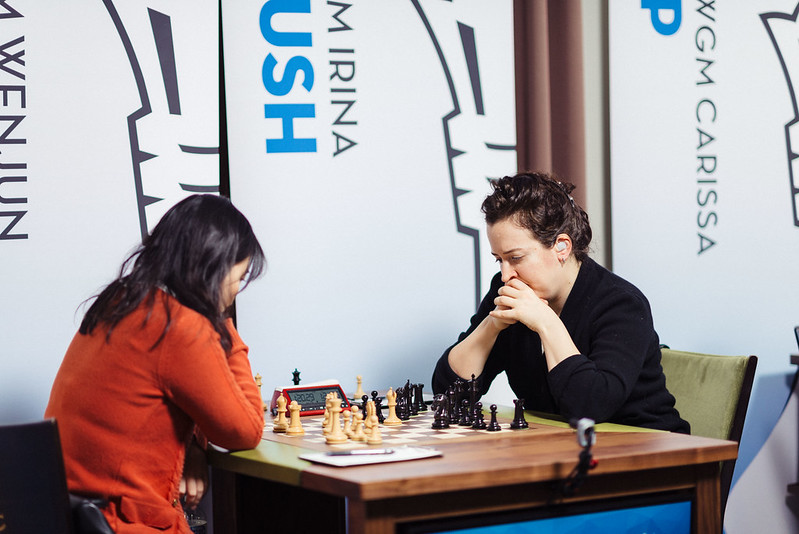 19.Rxc4?, rather than taking on d5 immediately, was a “zwischenzug” that could have been punished:

19…Bc6!! was winning. Irina had seen the move, but not what to do after 20.Na7. The answer, it turns out, was 20…Nf4!!, and when the dust settles Black is a piece up. Instead after 19…Qb8 20.exd5 the imminent danger had passed and in fact it was Ju Wenjun who went on to press in a good knight vs. (slightly) bad bishop ending until a draw was finally agreed on move 74.

That means that after two rounds the standings are already spread out, with last year’s unbeaten winner Valentina Gunina and Carissa Yip yet to score while we have four players in the lead: 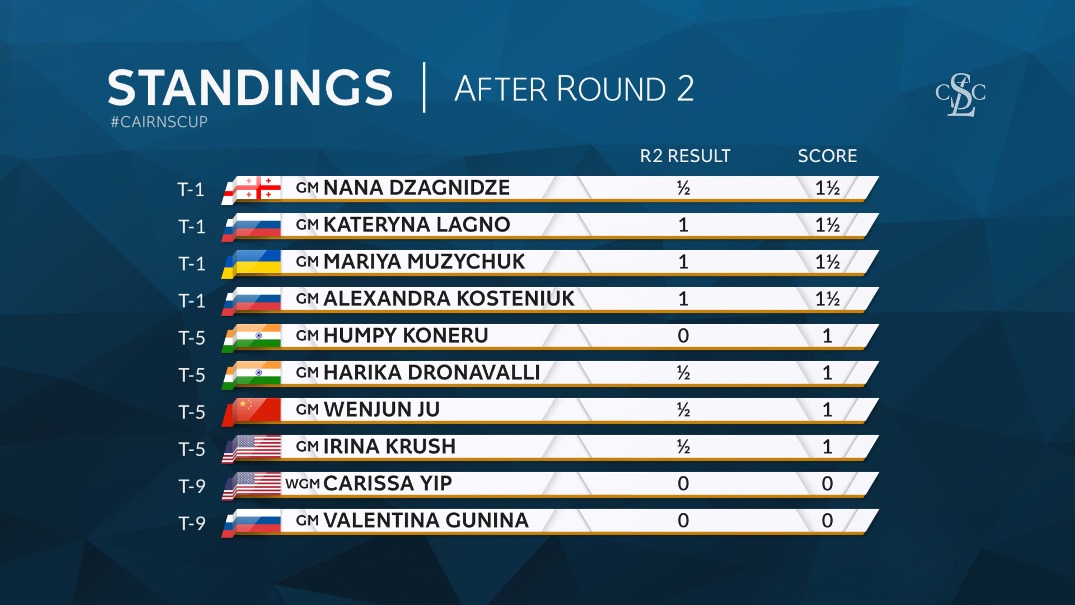 Two of the leaders, Kateryna Lagno and Mariya Muzychuk, meet in Round 3, while Humpy Koneru vs. Ju Wenjun is another big clash for the standings at the top of the women’s live rating list. Don’t miss all the action live here on chess24 from 20:00 CET!