Humpy Koneru edged above Ju Wenjun into the women’s world no. 2 spot after 16-year-old Carissa Yip’s brave decision to play the King’s Indian Defence backfired in Round 1 of the Cairns Cup. The day’s other winner in St. Louis was Nana Dzagnidze, who confidently beat last year’s champion Valentina Gunina after picking up a pawn on move 15. 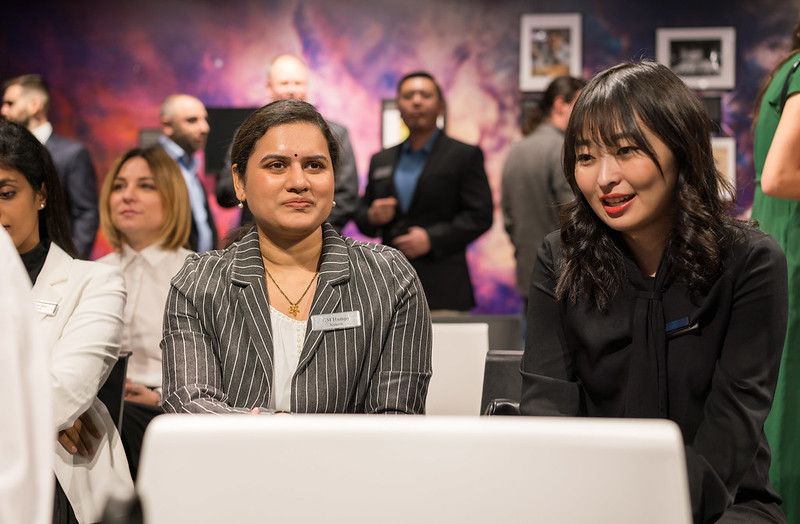 Humpy Koneru and Ju Wenjun, who sat together at the opening ceremony, are jostling to see who ends the Cairns Cup as the women's no. 2 behind the inactive Hou Yifan | photo: Lennart Ootes, official website

You can replay all the games and check out the pairings from the 2020 Cairns Cup using the selector below:

And here’s the commentary on Round 1 from Jennifer Shahade, Yasser Seirawan and Alejandro Ramirez:

Koneru goes from strength to strength

Humpy Koneru took two full years away from chess from late 2016 to 2018 as she became a mother, but since her return she’s got right back into the groove. Late last year she won the Women’s World Rapid Championship and she’s currently leading the Women’s Grand Prix series after finishing in clear and joint 1st place in the two events she’s played. Now with a win in Round 1 in Saint Louis, Humpy has edged 0.2 rating points ahead of the Women’s World Champion Ju Wenjun into the world no. 2 spot on the live rating list. 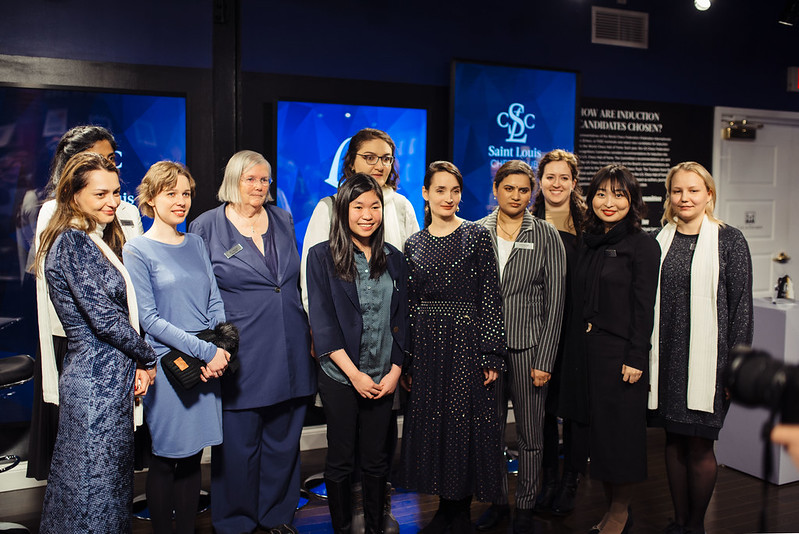 16-year-old Carissa Yip is the youngest ever US female IM, but she's facing a field composed only of grandmasters | photo: Austin Fuller, official website

Humpy gained the grandmaster title before her 16-year-old opponent Carissa Yip was even born, and she went on to give the young US star a lesson in Round 1. Carissa showed the fearlessness of youth as she played the King’s Indian Defence (the KID, appropriately enough!), but she would live to regret her choice on move 19:

There might still have been hope, however, if Carissa had later played the immediate 29…f5! instead of going for the passive 29…Rb8?

Humpy got down to under a minute here but found the winning plan of 30.Bd2! and pushing her a-pawn. Both players were in time trouble, which accelerated the finish, with Carissa resigning when her opponent reached move 40:

Dzagnidze ensures there’s no repeat of 2019

The day’s other winner was Nana Dzagnidze, who took revenge for a loss to Valentina Gunina in last year’s Cairns Cup. That loss had been Nana’s second with White in the first four games, while Valentina went on to remain unbeaten and win with 7/9. This time round it all went smoothly for Nana, who exploited her opponent’s dubious 9…Qd6?! and was able to pick up the h7-pawn for free on move 15. 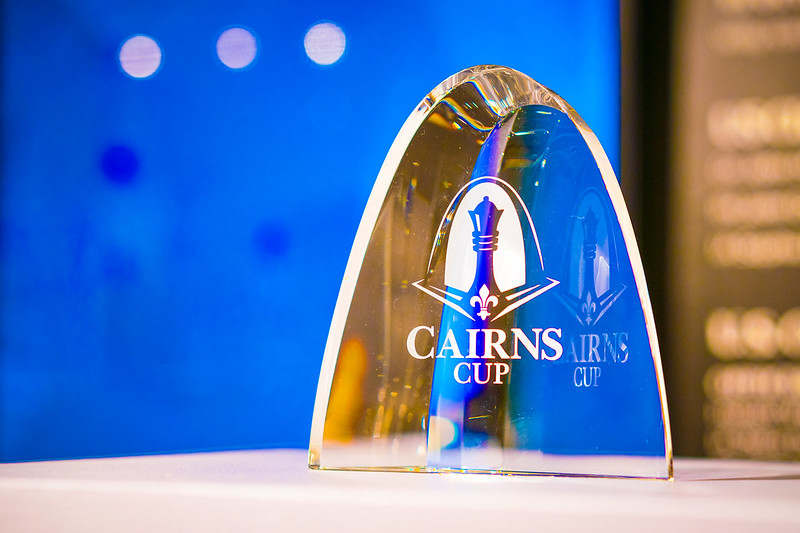 She was dominating across the whole board and seemed to convert smoothly, though there was one moment on which the game could have turned. 31.Kg2? (31.Kh1!) was a mistake: 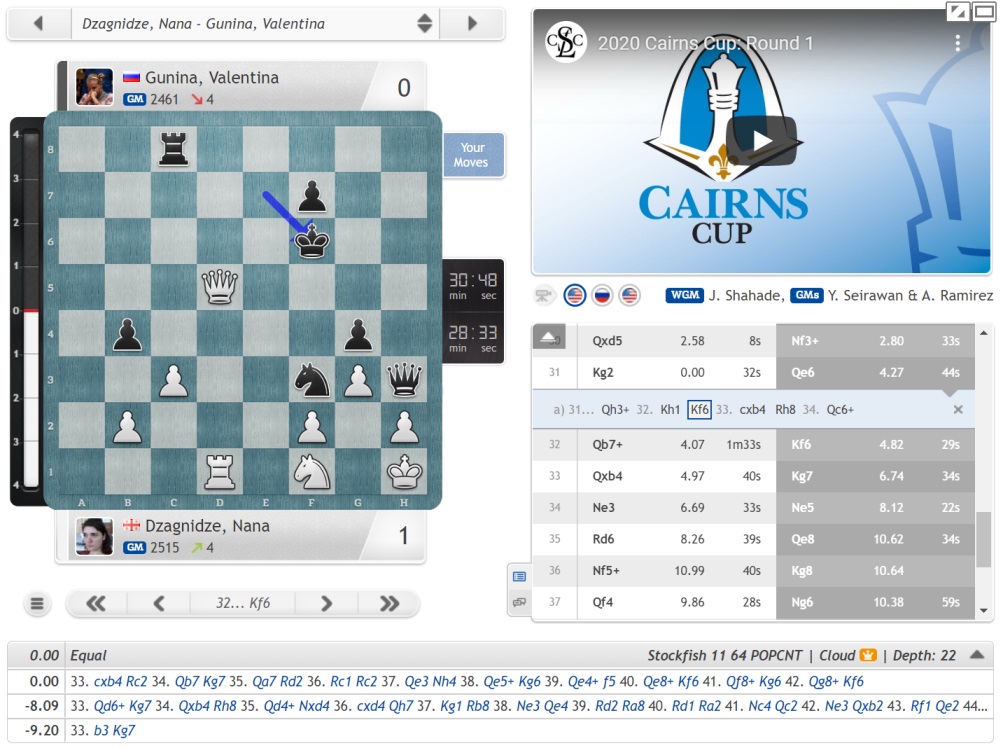 The black king is threatening to take refuge from checks on g7 when White has no good defence against the plan of Rh8, Qxh2+ and Rxh2# There’s only one move that salvages a draw: 33.cxb4!!, with the point that when Black brings her rook to the h-file the white queen will now also have the c3-square from which to give perpetual check against the black king.

Valentina was in deep time trouble, however, and with one second on her clock she played the losing 31…Qe6?, when after 32.Qb7+! Nana picked up the b4-pawn and went on to score a crushing win in 42 moves. 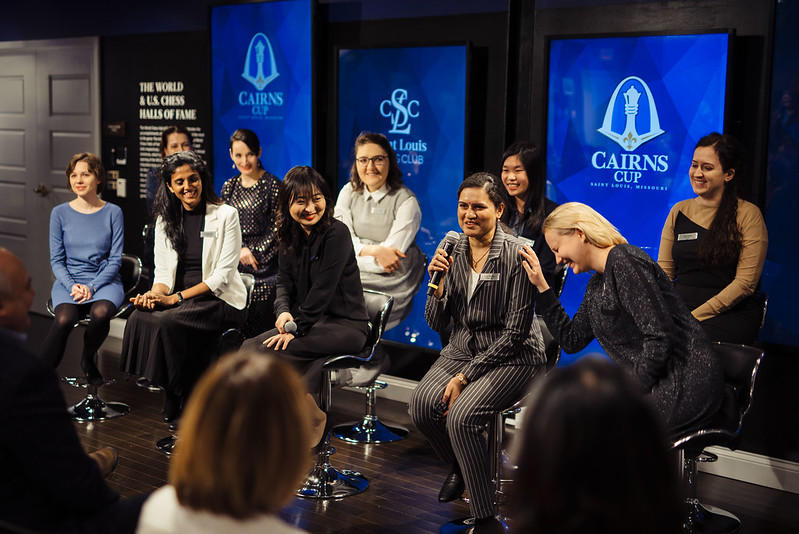 The remaining three games, Muzychuk-Ju Wenjun, Lagno-Harika Dronavalli and Kosteniuk-Krush, were all drawn, though all three were sharp struggles that could have gone either way.

That means Nana Dzagnidze and Humpy Koneru are the early leaders of the 2020 Cairns Cup, but they both face tough games in Round 2, when they have Black against Mariya Muzychuk and Harika Dronavalli respectively. Don’t miss all the action live here on chess24 from 20:00 CET!