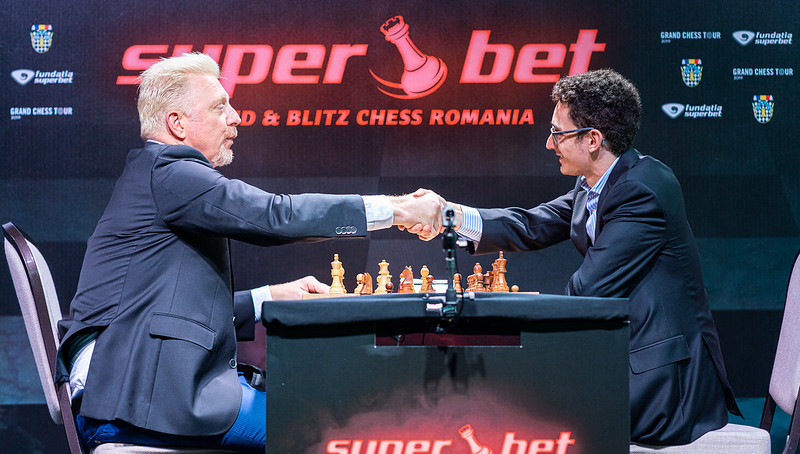 The Hamburg FIDE Grand Prix has just begun but chess fans are going to struggle to know where to look as today it’s joined by the latest and newest Grand Chess Tour event – the Superbet Rapid & Blitz. The format is by now very familiar to chess fans: 10 players compete over 9 rounds of rapid chess (25+10) on the first three days followed by 18 rounds of blitz (5+3) on the final two days. The pairings are out:

There’s going to be a battle for attention between events in Bucharest and Hamburg, but the Grand Chess Tour has got off to a good start. First there’s the best chess tournament poster we’ve seen in a while… 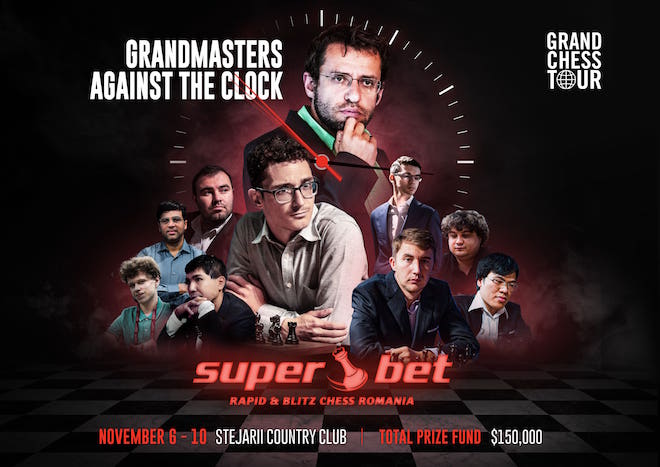 …and then there was the star power of Boris Becker at yesterday’s opening ceremony! 51-year-old Becker famously won the first of his six Grand Slam tennis titles as a 17-year-old at Wimbledon, and his interest in chess is no secret. 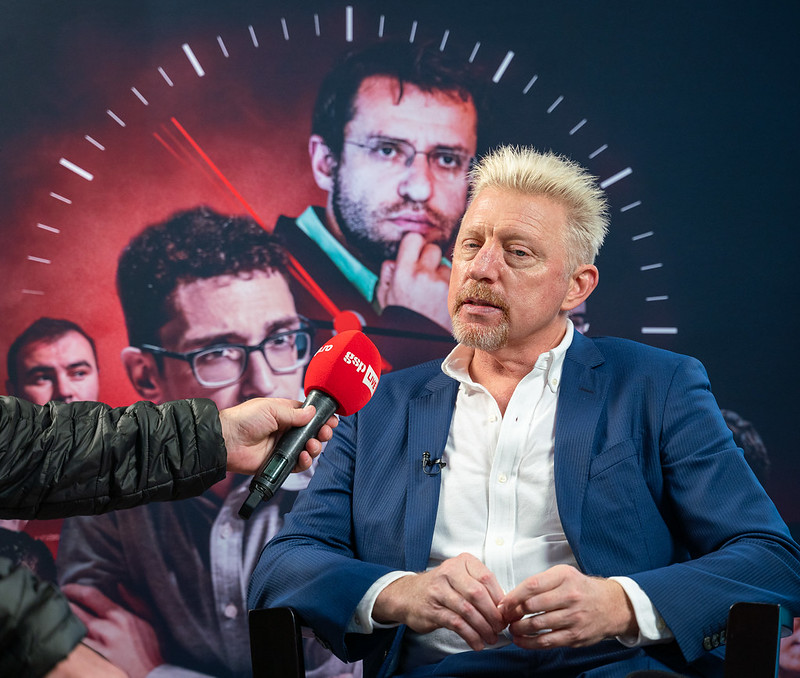 Back in 2011 he played a game against Nigel Short at the London Chess Classic, and before the event in Bucharest he was quoted as saying:

Chess is a lot like tennis, I always believed that. Both involve a lot of strategy and focus, in both cases you are on your own, face to face with the opponent. Since I finished my tennis career, I have spent more time on mind sports, a great passion of mine, and I am excited to participate in the Superbet Rapid & Blitz Chess stage in Bucharest, where I have the opportunity to see some of the best players in the world.

It was not only the opportunity to see them but to play a game against world no. 2 Fabiano Caruana. With 1.e4 e5 2.Qh5!? Boris went straight to the net:

From the full game (courtesy of Lennart Ootes), we can conclude that either Fabiano is out of form after playing too much Fischer Random or found incredible restraint not to win a piece with d5 on move 4 or most moves after that, but it was a decent showing from Boris. There was no umpire on hand to punish him for moving with one hand and hitting the clock with another, and the German player also picked a good moment to lose on time!

It will be good to see wild cards such as 21-year-old Russian Vladislav Artemiev, one of the heroes of the first half of 2019, and the always entertaining Anton Korobov from Ukraine, but the main intrigue of the event will be the fight for one of the four qualification spots for the London finals. The current standings are as follows, with up to 13 points available for a player in Bucharest: 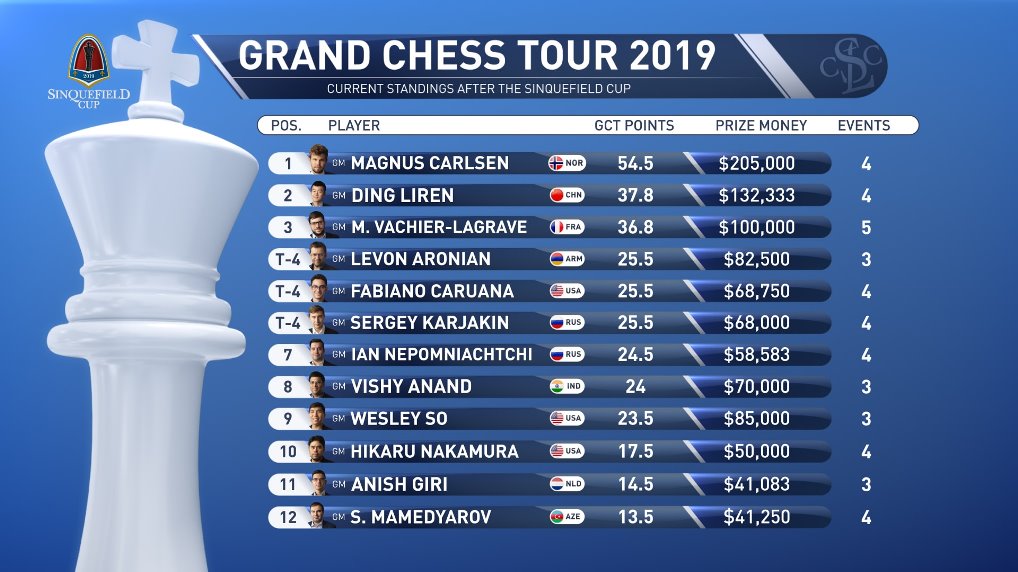 Magnus is already through, while Ding Liren is well-placed with one event to play - the Tata Steel Chess India Rapid & Blitz later this month. Maxime Vachier-Lagrave is currently 3rd but has played all five of his tournaments, so can easily be caught.

Of those playing in Bucharest you can see that Levon Aronian, the only player in the field to win a Grand Chess Tour event this year, is much better placed than Caruana and Karjakin – they all have 25.5 points, but Levon still has two events to go. Wesley So, Vishy Anand and Anish Giri are also playing in both Bucharest and Kolkata, so can challenge if they do well in both. 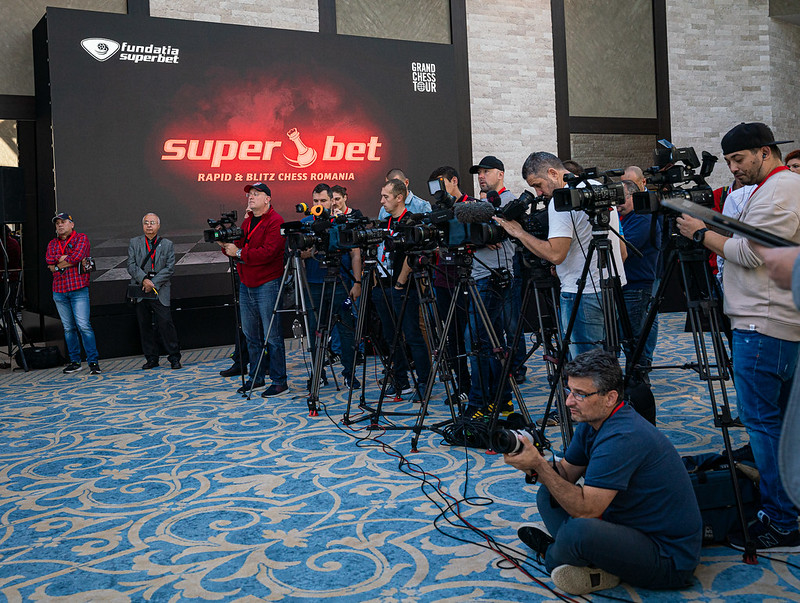 It looks impressively organised already, and this is just the beginning - it was announced at the opening ceremony that Superbet will be the first classical event of the 2020 Grand Chess Tour! | photo: Lennart Ootes, Grand Chess Tour

The action in Bucharest starts at 15:00 local time, which is 14:00 CET, or one hour earlier than in Hamburg. Once again we’ll have live commentary in English, Spanish and Russian here on chess24!