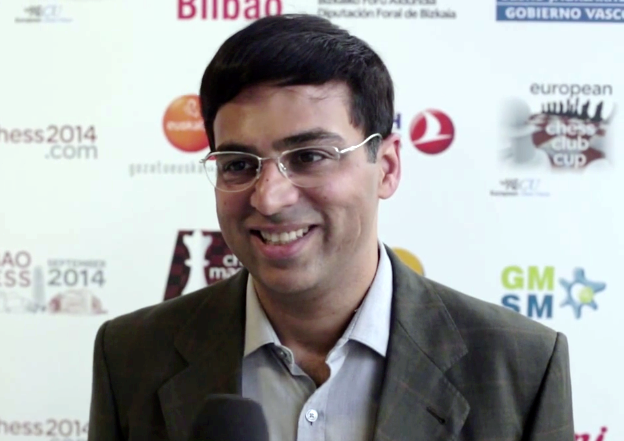 Vishy Anand has won the Bilbao Masters at his 5th attempt, after an effortless draw against Ruslan Ponomariov put him four points clear with only one game to go. Levon Aronian was the only player who went into Round 5 with a chance of catching the former World Champion, but despite heroic efforts the Armenian was unable to force a win against Paco Vallejo.

Bilbao Masters - Standings after Round 5

The game between Ponomariov and Anand was less than spectacular. Due to a minor mishap the day before Ruslan actually prepared for the game twice, but there was little he could do against the quiet Ragozin Variation played by Anand. It was curious, though, that the pawn structure closely resembled the one in which Anand had overwhelmed Vallejo the day before, though this time Vishy was on the other side of the board.

He explained, however, that appearances were deceptive:

I had a bishop on e3, a bishop on e2 and I could play Nd2. He, on the other hand, had a queen on c2 and a bishop on d2, so basically things don’t work out. The bishop on d2 stops Nd2 and there are a lot of details like that. In general, I was much faster with my counterplay, and I still kept both pairs of bishops. I would say in comparison with yesterday he was about two or three tempi down, and so I wasn’t particularly concerned.

Certainly when I played 16…c6 17.Ne3, for instance, I don’t go 17…cxd5, of course, because this would just land in yesterday’s position. I went 17…Rc8. There were a few important moves like that.

By the end it was actually Vishy who was on top, but he took a repetition - content to leave incredible streaks and chasing after records to young guns such as Fabiano Caruana.

Despite playing no classical games since winning the Candidates six months ago, Anand took no time to get into the same rhythm he showed back then - winning in the first round, holding off his opponents with ease and seizing chances to win when his opponents slipped. It's no surprise, therefore, that he managed to gain 14 points at the Candidates and now 11 here in Bilbao. With a rating just a shade under 2800 he's joined the group of players oscillating between numbers 3 and 6 on the live rating lists - the other contenders are Alexander Grischuk, Veselin Topalov and Levon Aronian. The form of the legendary Tiger from Madras is adding to the excitement surrounding his upcoming rematch with Magnus Carlsen.

Levon Aronian, meanwhile, has suffered a long spiral of decline this year, dropping from a position as clear world no. 2 down to world no. 6 on the latest lists.

While Bilbao has been far from disastrous it's again been uninspired, which could sum up the Round 5 game between Aronian and Vallejo. By move 18 they'd already reached an ending with two rooks for each side:

Aronian spent another 40 moves trying to exploit his slight structural advantage, but on this occasion Paco defended with ease.

All that remains, therefore, is to play tomorrow's final round that starts one hour earlier at 14:00 CET. Although tournament victory is no longer at stake it's clear that Aronian - Anand is a heavyweight encounter that matters to both players. Anand himself commented:


You still want to play a good game and play a good tournament. I’ll go and start getting ready for that game.

Vallejo - Ponomariov will be more about pride, but also who takes 2nd, 3rd and 4th place!

Follow all the action in the Bilbao Masters and also the European Club Cup with live video commentary by Jan Gustafsson and Lawrence Trent here on chess24! (Round 5 can be replayed here)