Ruslan Ponomariov put two losses behind him to beat Paco Vallejo with a sparkling combination in Round 3 of the Bilbao Masters. Afterwards the Ukrainian commented that he “wanted to show my friends and people that support me here that I can play”.

The heavyweight clash between Vishy Anand and Levon Aronian was a tense draw in a Ruy Lopez variation that’s the height of fashion among the world elite. Vishy is no longer on course for a Caruana-like winning streak, but remains in control going into the rest day.

Freshmen Media captured the atmosphere perfectly as the players came to compete in Round 3:

Ponomariov 1-0 Vallejo: One slip, one loss

Top-level chess can be an excruciatingly painful game. In Round 2 a single bad move turned the tables in Vallejo’s game against Anand, and in Round 3 history repeated itself. 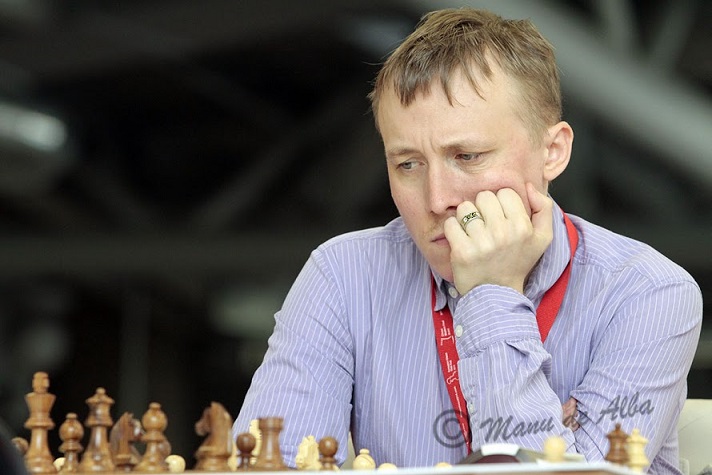 The "local" Ukrainian is finally off the mark! | photo: Manu de Alba

This time, however, the crucial mistake came as early as move 11 in a razor-sharp Sicilian. The Ukrainian former World Champion went on to exploit his advantage flawlessly and extend his lifetime score against Vallejo to 9 wins, 3 draws and 1 loss. Most of that “damage”, however, was done back in 2002/3, when Ponomariov was yet to turn 20 but was already World Champion.

9... ♘c6 10. c3 Continuing the previous idea. Ruslan aims to establish a very solid centre in order to be able to push his pawns on the kingside later on.

10... h5⁈ And Paco, in his dynamic style, fights directly against White's plan. The move is natural, but as Ponomariov goes on to demonstrate, the delayed development can prove very costly. Paco had various interesting ways he could have continued, such as:

11. gxh5 ♖xh5? The genuine error, since the sequence that follows is forced, although the position already strikes me as a little better for White, who can hold on to his h5-pawn. Of course any other move would have left the game wide open. 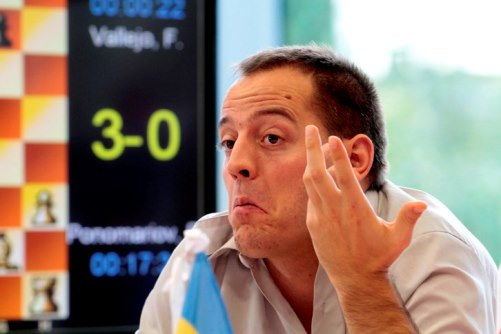 17. ♘xg7+ ♔f8 18. 0-0 Black's position is very difficult since he has absolutely nothing in return for the awful position of his king - in fact, he's even temporarily down a pawn!

23. ♕d2 Missing a very aesthetic finish, but the position is still desperate for Black.

After the game Ponomariov talked about his frustration at his poor start, the moment he realised Paco had blundered and his football plans for the rest day:

Anand 1/2-1/2 Aronian: Not quite following in Fabiano’s footsteps

Until move 11 former World Champion Anand was following Caruana’s play from his win against Aronian in Round 4 of the recent tournament in St. Louis – an encounter where Aronian was slowly put to the sword after ending up in a totally passive position. Peter Svidler, who analysed that game brilliantly for chess24, commented: “We have courtside seats for a Fabiano clinic on how to exploit this advantage”. 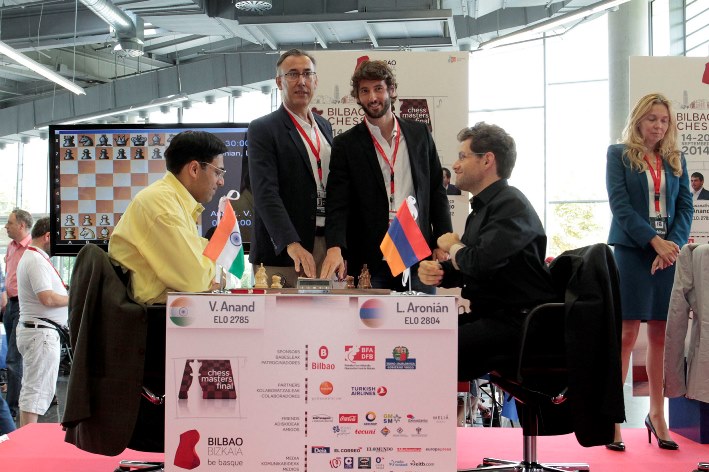 Anand was the first to deviate in Bilbao, but although he managed to ratchet up the tension there was no repeat of events in St. Louis. The Armenian no. 1 sacrificed a pawn for active defence and managed both to hold the draw and hold on to his no. 3 spot on the live rating list.

We take a look at the game, including the players' own analysis from the post-game press conference:

1. e4 e5 2. ♘f3 ♘c6 3. ♗b5 Two specialists face to face. Vishy has scored great wins in the Ruy Lopez but Aronian is also known for his mastery of various lines.

3... a6 4. ♗a4 ♘f6 5. 0-0 ♗e7 6. d3 The more closed options, once considered secondary, have for years now been considered just as critical as the old main lines - above all in order to avoid the Marshall.

11. ♗xe6 fxe6 12. b4 ♘c6 was seen in Caruana - Aronian, Saint Louis 2014. I'm not going to go into any more detail here since you can enjoy it with the wonderful analysis of Peter Svidler.

11... ♗xa2 12. ♖xa2 ♘c6 13. ♗g5 This was Vishy's idea. Curiously, the manoeuvre Bg5 followed by Bxf6 is considered the "hallmark" of Magnus. After playing through so many of his games something has stuck!

20. ♕b1 "I wanted my queen to be able to get to b3 without blocking the rooks, since I also wanted to occupy the d-file with my rooks." - Anand

21... ♘xd5 22. ♘xd5 ♕xd5 23. ♖e1 ♗f6 24. ♖ae2 White has finally managed to put pressure on the e-pawn. Aronian, however, has correctly judged that he can sacrifice that pawn in exchange for good compensation. 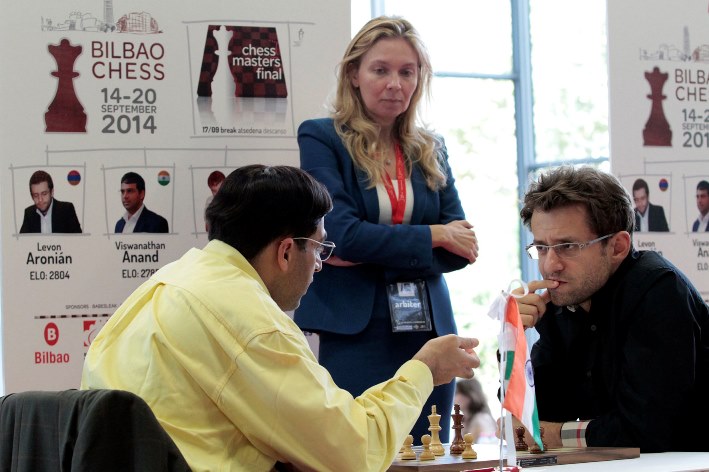 So at the half-way stage in Bilbao Vishy Anand continues to lead, though Ruslan Ponomariov has now leapfrogged Paco Vallejo into third place:

Wednesday is a rest day, with the second half of the Bilbao Masters commencing at 15:00 on Thursday 18 September, when Ponomariov and Anand have the white pieces against Aronian and Vallejo. You can again watch the action live here on chess24 with computer analysis and commentary by Jan Gustafsson and Lawrence Trent! (Round 3 can be replayed here)