Viswanathan Anand’s World Championship match warm-up in Bilbao started with a text-book win that gave Ruslan Ponomariov no chance in the first round of the 2014 Bilbao Masters. In the day’s other game Paco Vallejo had work to do after an opening gone wrong, but defended precisely to hold a draw against Levon Aronian. 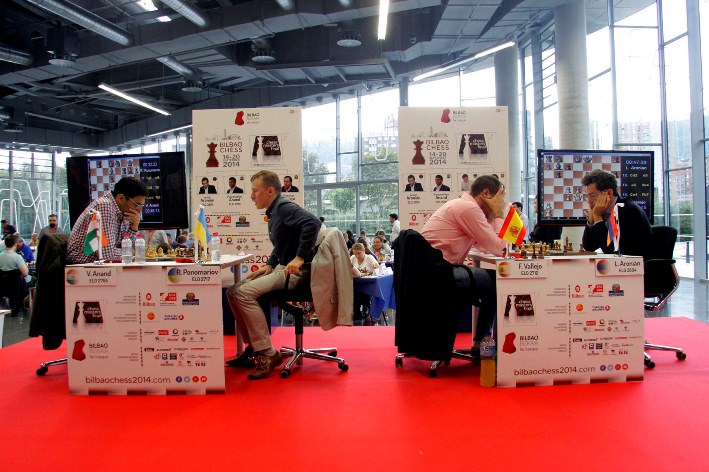 The event, together with the European Club Cup, was launched in Bilbao on Saturday in a colourful opening ceremony. For those not present the organisers produced the following dazzling recap: 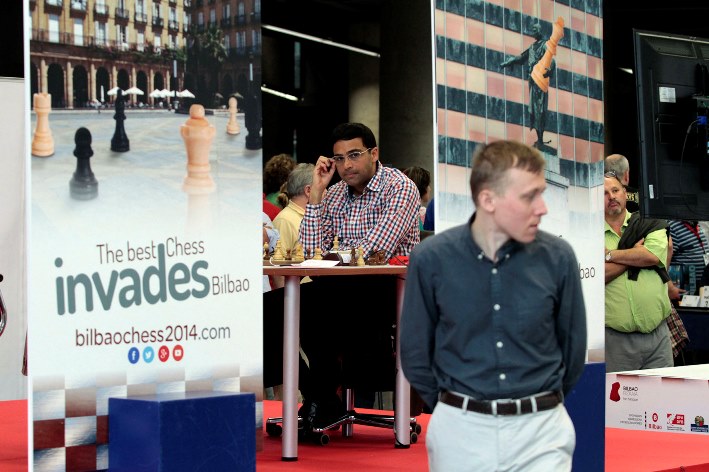 Viswanathan Anand didn't allow his opponent an inch of freedom in the first round | photo: Bilbao Chess 2014

Vishy Anand is one of the most universal of champions, but if we were to try and highlight one area where he stands out it would be his understanding of dynamic positions. That understanding manifests itself not only in complications and sacrificial attacks, but also in an ability to restrict his opponent’s options.

In Round 1 the Indian won a very instructive game against Ukraine’s Ruslan Ponomariov by starving his opponent of any hint of counterplay. He went on to win with an ease with which only great players can beat other top class opponents. The following game recalls Anand’s play in the Candidates, when his opponents were incapable of forcing complications at any point in the proceedings.

6... e5 7. d5 a5 8. ♗e3 ♘a6 9. g4 ♘c5 Ponomariov commented that the day beforehand he'd had a look at the game Tomashevsky-Nakamura, but Black's manoeuvre Nd7-b6 failed to convince him. However, the Ukrainian was also critical of this (very common) move and admitted he soon felt uncomfortable.

14. ♘b3! Anand: "Quite a typical manoeuvre here. I don't know if it's correct or not, but the idea is to exchange his best knight and leave him with the bad one on e8."

34... ♗xg4 35. ♖xg4 ♘c7 36. ♖f4 The simplest approach. Vishy's dynamic understanding was always first rate, and in this manner he eliminates his opponent's active pieces in order to leave him with bad ones.

57... ♕e2+ 58. ♗b2 Ponomariov has distracted the white bishop, but only at the price of no longer supporting h1.

Afterwards Anand commented that it still had the potential to go wrong in the final stages, so it was "not a bad idea to focus a little bit and just nail it!"

At least it wasn't all negative for Ponomariov! 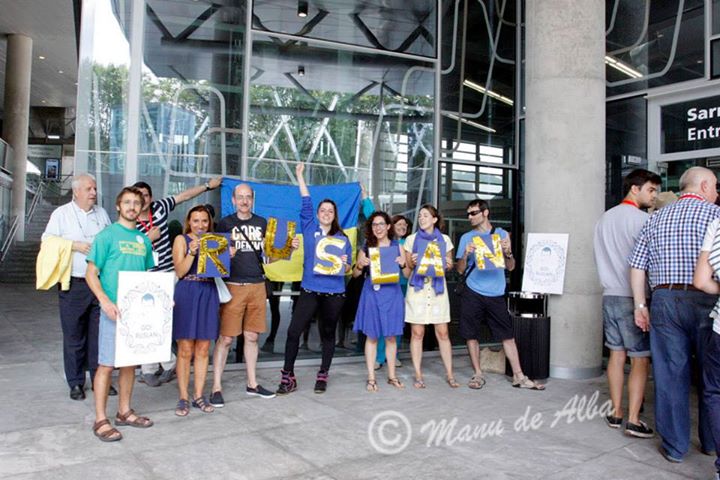 
After Round 1 Paco Vallejo talked about his semi-retirement after a bad loss in Bilbao in 2012:

Basically I needed a reset, like a computer. I wasn’t working properly – I wasn’t enjoying it at all. So I thought it’s time to stop and then after a while, actually, I was missing playing chess – this adrenaline. It’s kind of addictive!

In Sunday's game Levon Aronian’s excellent theoretical preparation paid off once more, since despite playing with the black pieces he was soon able to clamp down on Vallejo’s position. After two separate positional pawn sacrifices the Armenian reached a slightly better ending but was never able to consolidate his advantage due to his opponent’s activity.

5... h6 6. ♗h4 g5! Aronian once more demonstrates his sublime preparation. The normal move is 6...Bb7, but Leon delays this move as long as possible in order to remove options for White - specifically Nd2 against Bb7.

13. e4 Paco has no interest in such a turn of events and instead complicates the position further.

15. ♘d2 ♘d7 The bad news for White is that the black bishop now becomes a real thorn in his side. Vallejo remains true to his style and seeks the most dynamic solution. 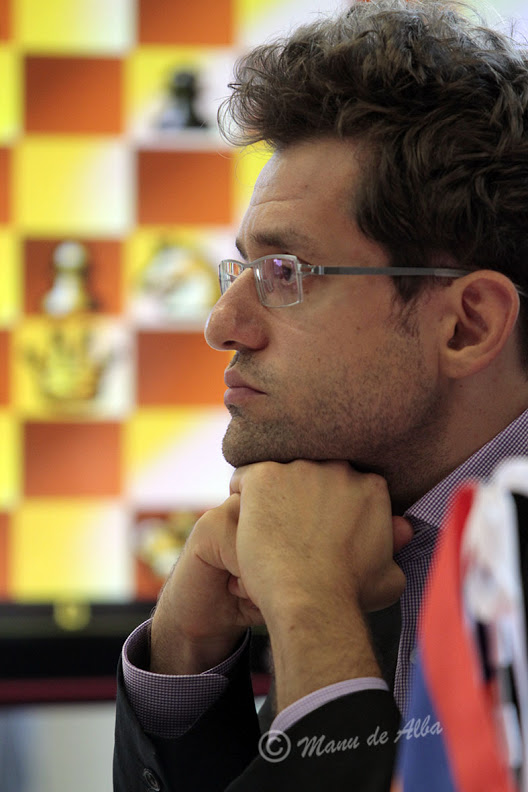 Aronian: "I got tempted to go for a forced line that maybe ended up not being so good as it looked" | photo: Manu de Alba

19... 0-0-0 Aronian, meanwhile, decides to return the pawn in order to enter a slightly better endgame.

19... ♘f8 would maintain the material advantage but completely cede the initiative to White: 20. a4 0-0-0 21. a5 and material isn't the most important factor in the position.

20. ♕xe6 ♕xe6 21. ♖xe6 ♘c5 22. ♖e3 ♘xd3+ 23. ♖xd3 This ending is somewhat favourable to Black because all of his pieces and also his pawn structure are somewhat better. However, White is very solid and the position remains holdable.

Levon was asked whether he had jet-lag after travelling from St. Louis:

I thought I didn’t, but today I went to sleep at around 1 o’clock in the night and I woke up around 1:30 in the day, so I guess there is something. I normally don’t sleep for 12 hours.

He wasn't blaming that for his failure to win, though, feeling he'd played fine:

My position was very good but at one moment I got tempted to go for a forced line that maybe ended up not being so good as it looked.

So after a hard-fought opening day Anand has taken the early lead in this six-round sprint of an event. The manner of his victory also matters – if Vishy can maintain his form from the rest of 2014 he should go into his World Championship showdown against Magnus Carlsen in a confident mood.

In today’s second round Anand has Black against Paco Vallejo, while Ruslan Ponomariov again has the black pieces, this time against Levon Aronian. You can follow all the action live with commentary by GM Jan Gustafsson and IM Lawrence Trent here on chess24!