One spot in the 2020 Candidates Tournament to decide Magnus Carlsen’s next World Championship challenger will be determined in an 11-round Swiss Open later this year. The new “FIDE Grand Swiss” will invite the Top 100 rated players from mid-2018 to mid-2019, plus a few others, for an all-expenses paid 15-day event that recalls the old Interzonal tournaments. The extra spot comes at the cost of a rating qualification place, with Mamedyarov and Ding Liren now leading the race for just one place. 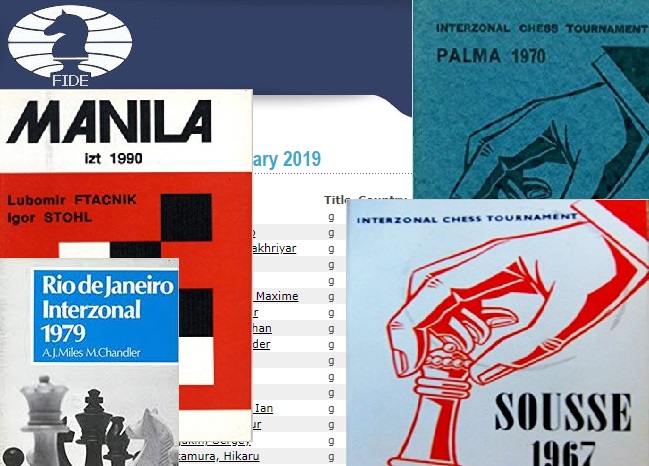 The Interzonal Tournaments were the type of events people used to write books about...

The new FIDE administration has already overhauled the women’s World Championship cycle, introducing a Candidates Tournament, and today the first big change to the overall cycle was announced. One place in the 8-player tournament to be held early next year will go to the winner of the new FIDE Grand Swiss to be held in the second half of this year. Some details of that event (check out the full regulations here):

The tournament is in many ways a return of the large Interzonal tournaments that fed players into a Candidates Tournament from the 1950s up until 1993. Players qualified via Zonal tournaments (for different geographic areas) and then would usually play a large round-robin, but by the end big open tournaments were being played as well. Boris Gelfand won the last FIDE Interzonal that was held in Biel in 1993.

The main difference was that Interzonals used to select multiple players for a Candidates Tournament or Matches - here the Top 10 qualified | source: Mark Weeks

The big advantage of the format is that a relatively large number of players will have a realistic chance of qualifying for the 2nd biggest event in chess, the Candidates Tournament. There were already positive responses from well-known grandmasters:

But how will it fit into the current system? Well, let’s take a look at the qualifying for the 2018 Candidates in Berlin. We had:


So far the only player we know for the 2020 Candidates Tournament is Fabiano Caruana. We also know the World Cup will take place in Khanty-Mansiysk later this year. What we don’t have are full Candidates Tournament regulations, but in the absence of information to the contrary we can assume the system will be similar except for the change announced today. FIDE explained that the Grand Swiss spot would come at the expense of one of the places that would otherwise be determined by the average ratings for 2019 (in 2017 Wesley So would have missed out).

To have only one spot is bad news for players hoping to qualify by rating, with Shakhriyar Mamedyarov and Ding Liren currently leading that race by a large margin - Ding Liren in 4th place (remember, Carlsen and Caruana have no need to qualify) is a full 30 points ahead of the next player, Anish Giri. Suddenly their comfortable lead has become a head-to-head battle!

This will hurt Mamedyarov and Ding? Wouldn't it be better and more fair removing the organizers' Wildcard for the Candidates?

The discussion there sheds some light on the limitations imposed on FIDE by the contract signed with Agon/World Chess by the previous administration. It turns out Agon “own” the wildcard spots for 2020 and even 2022 as well, so that it’s impossible to replace that spot with a player from the Grand Swiss without their agreement. Since the wildcard is something that can essentially be sold in return for sponsorship, that's not something they're likely to do freely.

The current big unknown with the cycle is the status of the Grand Prix. Will those somewhat unpopular events, which in the previous cycle were further crippled by Agon’s broadcast policy, return this year? If they don’t it would be possible to re-add another rating spot, and potentially offer a second place from the Grand Swiss – something that the regulations leave open:

The final decision on the number of qualifying spots to the Candidates 2020 from the FIDE Grand Swiss is to be taken by the FIDE Presidential Board not later than March 1st 2019.

So there are still some unknowns, and tournament organisers everywhere must be desperately trying to juggle a schedule overloaded with the expanded Grand Chess Tour and new FIDE events...

...but chess fans can look forward to another thrilling event in the second half of 2019. And players on the cusp of qualification may suddenly be thinking about their ratings. Is it time for Jan Gustafsson to play in a Candidates Tournament?

What do you think about the new event? If you’re in or around the Top 100 are you planning to play? What changes would you make to the qualification cycle? Let us know in the comments below!