Biel Rds 7 & 8: Vachier-Lagrave on the brink

France’s Maxime Vachier-Lagrave scored the only win in rounds 7 and 8 of the Grandmaster Tournament in Biel to put himself a full 1.5 points clear of the field with only two rounds to go. Spanish IM Pepe Cuenca takes a look at that crucial win against Alexander Motylev and other highlights of the only super-tournament still in progress. 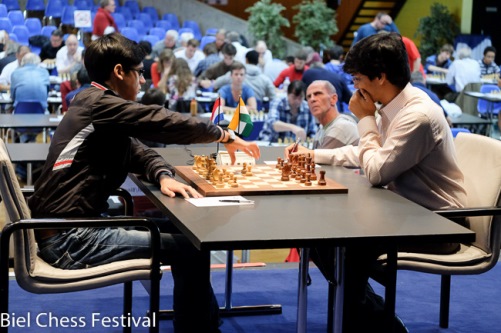 Anish Giri (left) can hardly be happy with his tournament so far, but things could have gone worse against Pentala Harikrishna | photo: official website

The first game to finish in Round 7 was the encounter between Anish Giri and Pentala Harikrishna. The Indian played an unconventional opening line recommended by his grandmaster compatriot Surya Ganguly.

After Giri committed an inaccuracy he was left with no choice but to sacrifice his queen. Nevertheless, he managed to go on to get excellent compensation for parting with his most powerful piece.

Let's take a look at that passage of play:

13. ♕a4⁈ Giri simply missed the continuation in the game, as he admitted in the post-game interview.

14... ♘e4 The queen is already in difficulty, but Giri finds a way to gain good compensation.

15. ♗b2 After the other option

15. ♗xe4 ♖xe4 16. ♗e3 a6−+ Black has an extra pawn, a healthy position and the white queen can be attacked at any moment, with no good squares for it to retreat to.

15... ♘c5 16. ♕xc6! bxc6 17. ♗xd4 White has a rook and pawn for the queen. The bishop pair and the option of using the c-file to attack Black's weak pawns make the position more or less balanced.

The next game to finish was the crucial confrontation between Motylev and Vachier-Lagrave. That saw a Najdorf Sicilian in which White sacrificed a piece, but some exquisite defensive allowed the French tournament leader to come out on top. 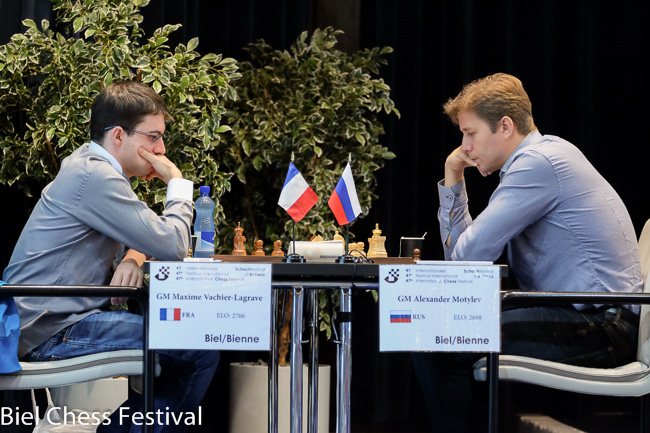 Maxime Vachier-Lagrave is now up to world no. 8 on the live ratings! | photo: official website

Let's take a look at the full game:

12. ♘b3 gxh4 13. ♗xh4 And they've transposed. Let's take a look at the position. Clearly it's double-edged, as are almost all the positions that arise out of the Najdorf. White has a better pawn structure (2 "islands" compared to Black's 3), and is a little better developed. Black, meanwhile, has an active knight on g4 and his bishop on g7 is a monster!

29. ♕g4! was better, preventing the black king from escaping on the g-file as it does in the game. How easy it is to analyse when it's not you sitting at the board!

34. ♕xe6 The best option was to suffer in this ending.

Hou Yifan had her chances against Radek Wojtaszek, but the Polish no. 1 eventually managed to find salvation in the following ending a pawn down.

You can watch Grandmaster Daniel King's brief round-up of the day's play, with player comments, below:

Tuesday saw a very even fight on all boards, with three draws finally agreed. We’ve picked out the following example of a common plan: regrouping pieces and looking for a diagonal for a bad bishop. In this case Women’s World Champion Hou Yifan applies the idea in its purest “stonewall style”, bringing the bishop from c8 to h5, after which she had few problems drawing against the tournament’s front-runner.

16. ♗d3 ♗e8 17. ♕e4 f5 18. ♕e3 ♗h5 19. ♘e2 ♗xf3 20. ♕xf3 The manoeuvre is complete. Black has exchanged her bad bishop for the good knight, which controlled e5 and defended d4. From this point on the position has simplified and Hou Yifan draws without difficulties. 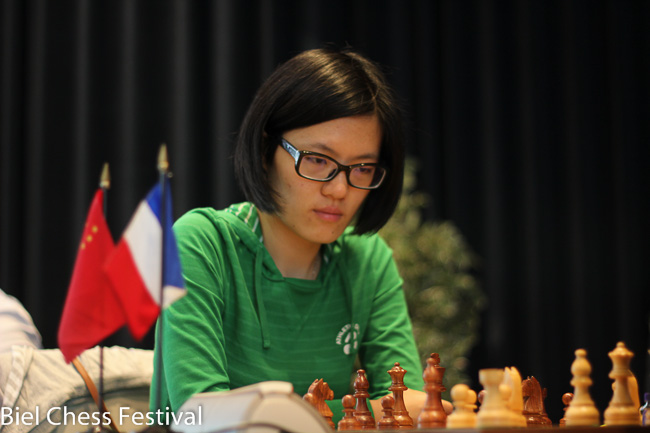 Hou Yifan has looked absolutely at home in Biel and is now up to 2659 (+30 for July!) on the live rating list. We're proud she recently filmed a video series for chess24 - Hou Yifan: My Career So Far | photo: official website

After eight rounds we still have a “chasing pack” of three players, though only a win for Anish Giri in Round 9 is likely to cast any doubt on Maxime Vachier-Lagrave’s ultimate coronation:

You can watch live and replay all the games with computer analysis here on chess24.