Frenchman Maxime Vachier-Lagrave was the only player who managed to score a win in rounds 5 and 6 of the Biel super-tournament. His victory over Anish Giri means he goes into the only rest day of the event a full point clear of the chasing pack of Radoslaw Wojtaszek, Pentala Harikrishna and Hou Yifan. 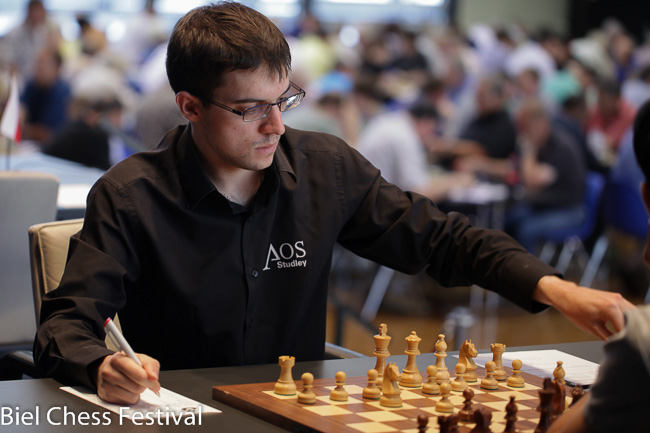 Later this year Maxime Vachier Lagrave will take on Magnus Carlsen, Levon Aronian, Fabiano Caruana, Hikaru Nakamura and probably Sergey Karjakin in the 2014 Sinquefield Cup, which looks set to be one of the strongest tournaments ever held. So far in Biel he’s shown he’s unlikely to look out of place there, with his round 5 win over Anish Giri putting him bang on course to defend the title he won last year (and in 2009).

The game was a fine strategic crush in which Maxime slowly exploited a mistake by his opponent, providing an instructive lesson for players of all levels – as IM David Martinez explains:

I like commentating on victories against the Berlin - perhaps we'll get lucky and it'll drop out of fashion! Though I'm afraid we'll have no such luck...

5... ♘d6 6. ♘xe5 ♗e7 7. ♗f1 ♘xe5 8. ♖xe5 The symmetry of the position means there's a tendency towards a draw, but Spanish Grandmaster Iván Salgado, a big specialist in this line, had already warned me that White has chances to press and, thanks to him, I had the opportunity to put it into practice against new Spanish Grandmaster Ángel Arribas. Had Iván also had a word to Maxime about it?

17... f4 is possibly a more active option, but it leaves the h3-c8 diagonal open for the white bishop.

19... d4? Accepting the challenge! In my view this is an error since when you're fighting against the bishop pair it's usually best to place your pawns on the colour of the bishop you don't have. That's a classical concept that of course has countless exceptions. Nevertheless, in the game Vachier-Lagrave punishes this move slowly but ruthlessly, since the pawn turns into a weakness and b7 also falls on move 39.

34... ♕d7 35. h3 Starting to threaten to create the second (or in this case third?) weakness considered necessary to win. White will open up the kingside at an opportune moment while continued to put pressure on d4 and also retaining the light-squared pawns on the queenside as targets. 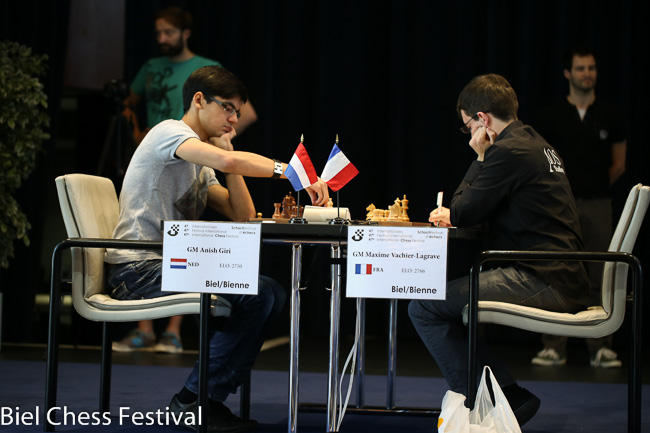 The games were discussed live on chess24 by Jan Gustafsson and Lawrence Trent:

Round 6 changed nothing on the leaderboard, as all three games were drawn, although Maxime Vachier-Lagrave could have increased his advantage yet further against India’s Pentala Harikrishna. The game saw a Najdorf with the variation invented by Paco Vallejo, 6.Qd3.

Let’s look at some of the key moments of the game. In the following position Maxime got an advantage thanks to his opponent’s error 18.Nxf4? (the correct move was 18.Bxf6).

Maxime responded energetically with 18…Ne5! 19.Qe2 g5! winning a piece and recovering the material. It seemed nothing could stop the young Frenchman, until he went astray on move 26:

Maxime captured with the queen, but after 26…Qxd6 27.Qxd6 Nxd6 White was able to hold (replay the full game here). The correct capture here was instead with the knight, since White has fewer defensive options with queens still on the board. After 26…Nxd6 Back has ideas like Nde4 and Rc8, and the black advantage should be decisive. A bitter draw for the Frenchman, who nevertheless retains a comfortable lead and is flying high in 9th place on the live ratings list. 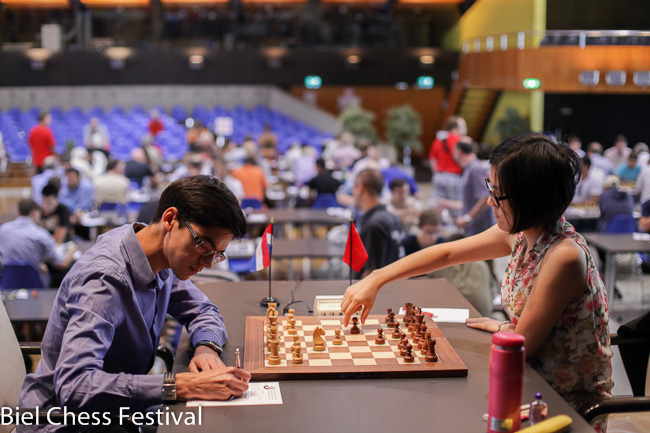 Elsewhere Hou Yifan put up heroic resistance in a difficult position to hold a draw against Anish Giri, bringing an end to the Dutchman’s streak of 5 decisive games in a row. Hou Yifan remains in the chasing pack on 50%:

For one day only Macauley Peterson was a guest in front of the chess24 cameras alongside German GM Ilja Zaragatski:

GM Jan Gustafsson should return on Sunday, after a trip to Baden-Baden for a simultaneous display featuring the likes of ex-World Champion Viswanathan Anand. Don't miss our live broadcast!