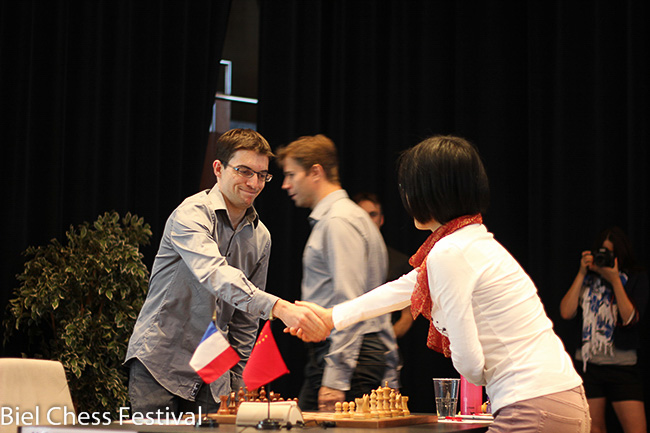 Maxime Vachier-Lagrave started off as a gentleman... but seized the lead by defeating Women's World Champion Hou Yifan in 63 moves | photo: official website

Our chess24 commentary duo of GM Jan Gustafsson and IM Lawrence Trent talked about the games live - if you missed it you can replay the show below:

It’s unusual to see a round with only decisive games at this level, so perhaps this is an opportune moment to congratulate the organising team of Technical Director Peter Burri and GM Tournament Director Yannick Pelletier. They clearly know what they’re doing, and bringing together players who are ready to fight with both colours guarantees action for the spectators.

Fighting spirit isn’t incompatible with quality, though. The game between Hou Yifan and Maxime Vachier-Lagrave (replay it here) highlighted the fine technique of the French player:

He first played h5-h4 in order to weaken his opponent’s king, and then played a lengthy manoeuvre – Qd8-a8-a2-b1 – in order to activate his queen and pose concrete problems for Hou Yifan.

The ending Giri won against Wojtaszek might have seemed objectively drawn:

But thanks to the existence of 7-piece tablebases nowadays we know that it’s actually won. You can replay the game and see who Giri managed to convert his passed pawn into a full point on the scoreboard.

It’s rare to see a Berlin broken down, but that happened in Motylev-Harikrishna. However, in this case we can’t lay the blame on the opening, since the Indian was doing well until he stumbled into an unusual tactical motif – his bishop got trapped in the middle of the board!

Harikrishna should have played 25...c5 or 25...h5 to protect his bishop. Instead he went for 25... g5? and after 26.Nc3 Bd3 27.Ra1! he realised that White would double on the d-file and the bishop is left without squares! Although he didn’t lose on the spot the lack of mobility eventually cost Black the game.

GM Daniel King presented a short report on the round, with player comments: 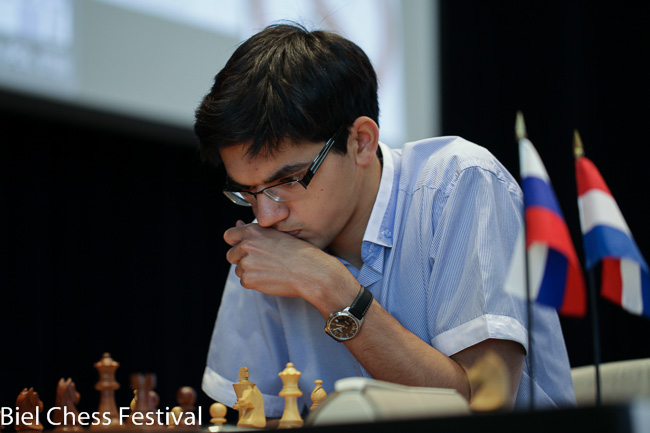 World no. 14 Anish Giri didn't let his opening losses dampen his spirits and is now right back in the running! | photo: official website

After his first win Giri notched a second, but it was far from easy. A well-played Slav gave Motylev the advantage, but then he condemned himself to defeat with a serious tactical mistake:

Motylev’s last move aims to start expelling the white pieces in order to later convert the extra pawn into a win, but he missed the brutal 36.Nd4!, exploiting the pin of the black rook to win the exchange. Giri didn’t forgive him that mistake and went on to score an important win that leaves him back in contention again. 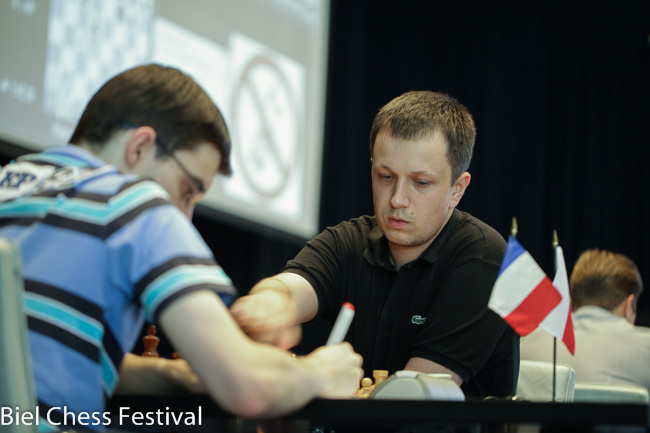 From move 23 to a draw on move 38 Maxime and Radek made most of their moves in about 5 seconds! | photo: official website

Wojtaszek and Vachier-Lagrave simplified the position at break-neck speed to reach a dull draw, but Hou Yifan tried to press in every way imaginable against Harikrishna’s Caro-Kann – including by sacrificing the exchange – but the Indian held on for a draw.

After four rounds the standings are as follows: