Biel Rd 9: All wins and all to play for

Run-away leader Maxime Vachier-Lagrave was brought to an abrupt halt by Anish Giri in Round 9 of the Biel Chess Festival and now goes into the final round only half a point ahead of Hou Yifan and Radoslaw Wojtaszek. The latter two both won on a day of novel and risky openings, with two game-changing blunders only adding to the spectacle. 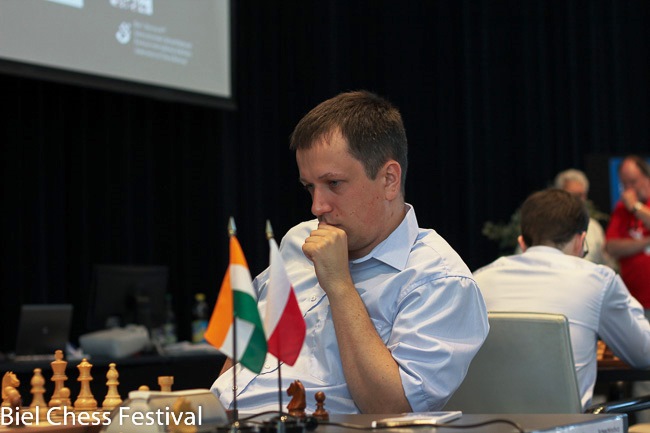 A fine win for Poland's Radek Wojtaszek has given him an outside chance of winning his first super-tournament - all he needs to do now is beat Maxime Vachier-Lagrave with Black in the final round! | photo: official website

The game of the day was between Radek Wojtaszek and Pentala Harikrishna. The Pole played the unusual 7.Bb5 line of the Grünfeld Defence (don’t miss Peter Svidler’s epic video series on the opening). Wojtaszek pressed his opponent relentlessly and went on to score an impressive victory:

1. d4 ♘f6 2. c4 g6 3. ♘c3 d5 The Grünfeld is one of the most fashionable lines among the chess elite. It ensures double-edged positions in which all three results are possible.

7. ♗c4 is one of the most ancient lines. White develops his knight to e2.

8. ♘f3 0-0 9. 0-0 ♘a5 This strikes me as quite logical. Sooner or later Black has to break with c5 in order to destabilise the white centre. Moreover, the c4-square can be good for the black knight in future.

10. ♗f4! This move by the Pole turns out to be a novelty! The white bishop usually heads to e3 in the Grünfeld, but that's due to the fact that a certain pressure exists on the d4-point (a knight on c6 hitting d4). In this case the pressure on the centre isn't overwhelming so the bishop can head for a more active square.

It was a tough day for the Indian no. 2! | photo: official website

13. e5 Brave. If Black manages to destablise White's centre it'll all be over. Still, it's difficult to resist advancing your central pawns :)

21. ♕e3 ♘c6 22. ♘f3 ♘b4 23. ♖d2 ♕a4 Black has lost a lot of tempi and should instead have reacted much sooner with f6. Now the danger is no longer positional but getting mated.

29. ♕g5‼ would have been crushing, with Re4, Rh4 and mate almost unstoppable. The black position is still extremely unpleasant, though, and the Indian found himself in serious time trouble.

38. ♕e5 Defending d6 and giving the e6 rook the freedom to move. 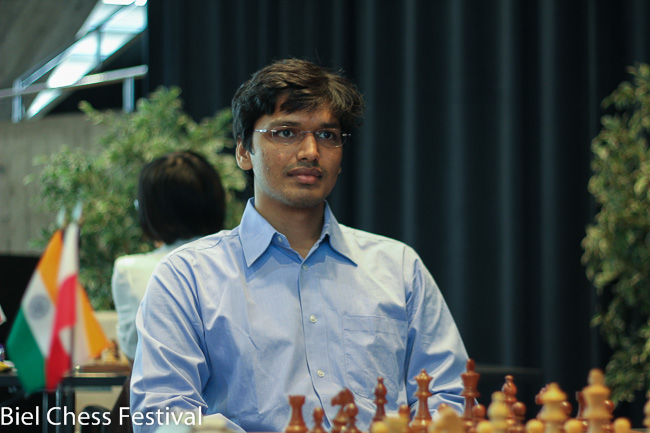 Harikrishna failed to react in time and was eventually overwhelmed by Wojtaszek's army | photo: official website

Hou Yifan came up against the Caro-Kann of Alexander Motylev. The European Champion had no problems whatsoever and even achieved a slightly better position, but things aren't going well for Alexander in Biel - everything turned on the following mistake:

31... ♘d6? Today seems to be the day when the d6-square was cursed for black knights.

You can play through the whole game with computer analysis here. 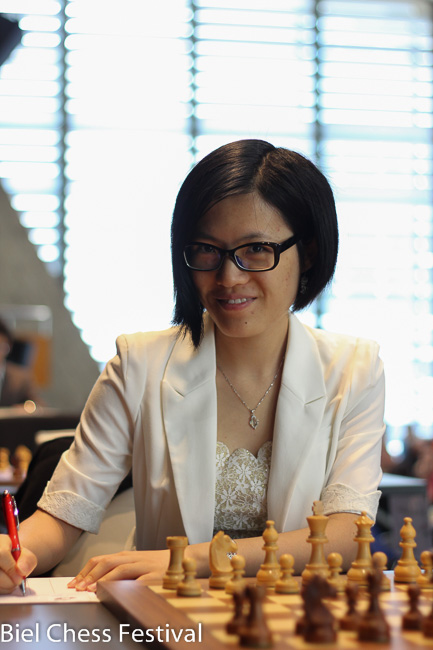 Hou Yifan hasn’t been intimidated and is taking this elite tournament in her stride | photo: official website

One of the sub plots of the upcoming Olympiad will be whether Hou Yifan can catch up with Judit Polgar. There's isn't far to go!

The leader, Maxime Vachier-Lagrave, had to suffer early on after being caught out in Anish Giri’s preparation.

He thought for 43 minutes on move 8, but ultimately achieved a decent position before he followed Motylev’s lead and spoiled his position with the same Nd6 move. Giri was able to exploit the slip and pick up a full point:

36... ♘d6? A blunder just as in the Motylev game. The knight ending is lost since White's king is much more active than Black's.

36... ♖e8+! 37. ♔d3 ♔g7 While Black is undoubtedly still somewhat worse he should be able to hold the position due to the fact his rook can become active at any moment. In the absence of rooks the white king is much stronger.

Click here to play through the full game with computer analysis. 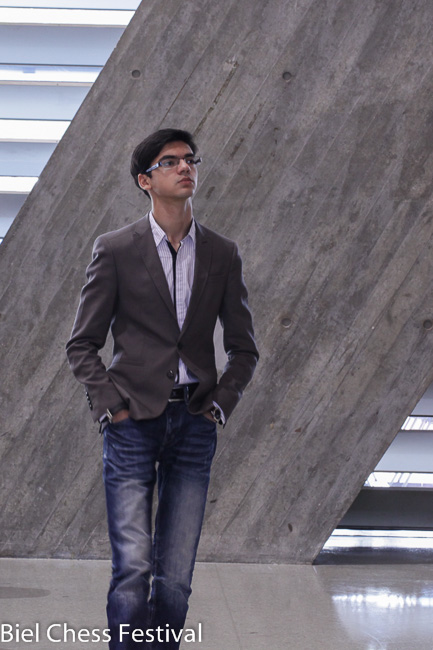 Giri cuts a dashing figure as he takes down the leader "MVL" | photo: official website

Daniel King presented another excellent round-up of the day’s play, with comments from the players:

Who will dare put a knight on d6 in the final round?! The standings are now as follows:

Maxime's lead has been cut to a mere half point, with the pairings for Thursday's 10th and final round as follows:

As you can see, both Hou Yifan and Radoslaw Wojtaszek have the black pieces, but as Wojtaszek takes on the leader he has his tournament fate in his own hands.

You can watch live and replay all the games with computer analysis here on chess24.