The third round in Biel lasted less than four hours but all three games generated a lot of audience interest, as the participants showed very creative and bold play. Shakhriyar Mamedyarov defeated Maxime Vachier-Lagrave and now shares the lead, while David Navara beat Nico Georgiadis with the black pieces. However, the highlight of the day was the incredibly sharp draw between Magnus Carlsen and Peter Svidler in a wild Najdorf. 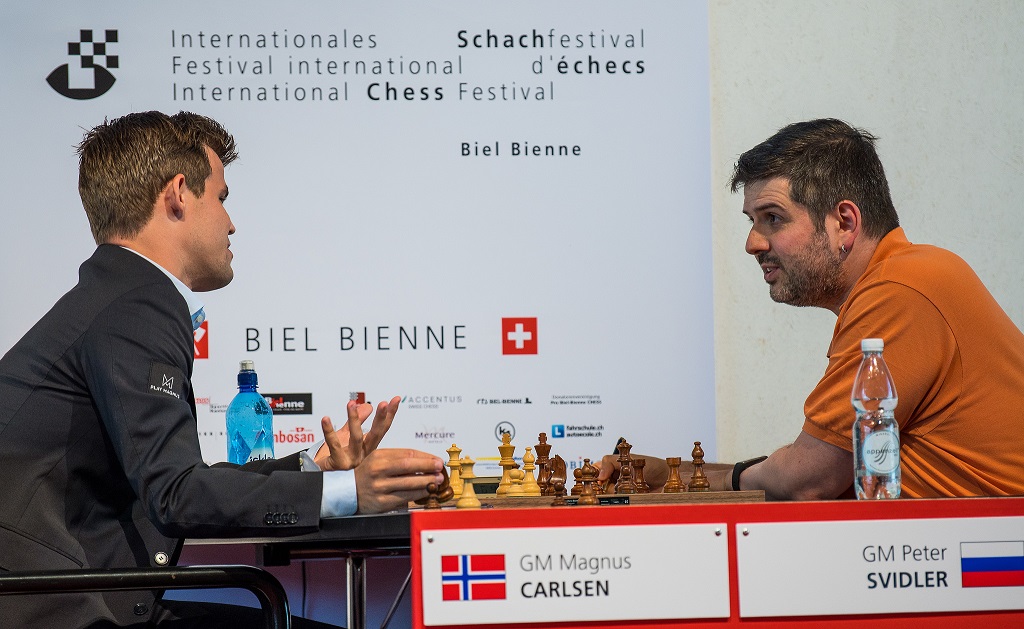 This was the longest game of the day in number of moves, as Georgiadis' third resignation in the tournament came shortly before the time control was reached. The Swiss grandmaster didn't come out of the opening with a promising position and took a drastic decision on move 18:

Just as Magnus had done against Navara in the first round, Nico gave up his queen for a rook and a bishop with 18.Rxd4. He could have played 18.Qh4 instead, but considered that the forced variation that followed 18...Nxe2+ wasn't good enough for White.

White was not completely lost, however. Furthermore, Navara confessed that he finds it hard to play with this particular material imbalance:

I'm not so good playing with queen against a rook and a minor piece or against two minor pieces because it's not so easy. In fact, I played more good games with the minor pieces against a queen than the other way around.

The Czech player found a good plan and executed it effectively this time around, however, and obtained his first win of the event. Georgiadis, on the other hand, is not having an easy time, but that didn't stop him from being in a good mood during the press conference. He had the following exchange with Anna Rudolf:

AR: Nico, it hasn't been an easy tournament for you. 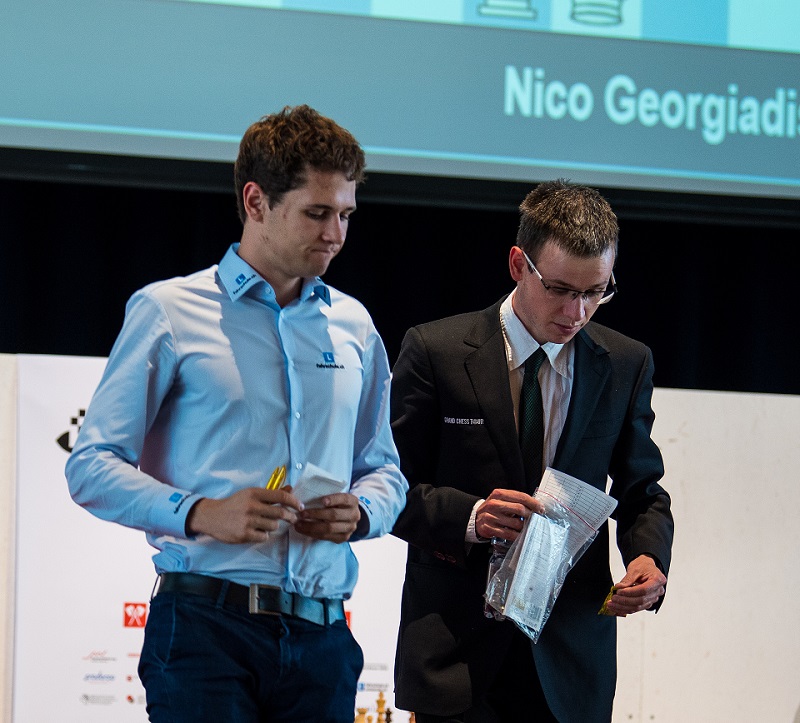 Nico will have the white pieces against the World Champion in the next round.

Things are looking good for the members of the "2800 club" in Biel. Shakhriyar Mamedyarov got his second win of the tournament and now shares the lead with Carlsen. On Tuesday, he defeated MVL and got to play what he called "one of my favourite moves":

Shak was talking about 7.g4, naturally. Maxime was prepared for it, but what the French player didn't expect was the quieter 9.h3 two moves later. Just like in the first round, Mamedyarov used an opening novelty to get a big edge early in the game. Soon afterwards, the Azeri thought for 22 minutes before playing 14.Qe2:

At this point, Vachier-Lagrave already knew it was going to be a tough day at the office:

It's a pity because I remember looking at this line and in the end it was giving very interesting play, but I couldn't recall any of that today and still I thought I had done something pretty smart. But then came Qe2 and I was on the defensive side.

White ended up with an extra pawn on the d-file and didn't have many problems converting his advantage. MVL resigned in a hopeless endgame:

The French player emphasised the importance of opening preparation at the highest level. To know the evaluation is highly important for the players:

It's a difficult position to navigate. You need at least to know where you're standing at some point, even if you don't remember the details. 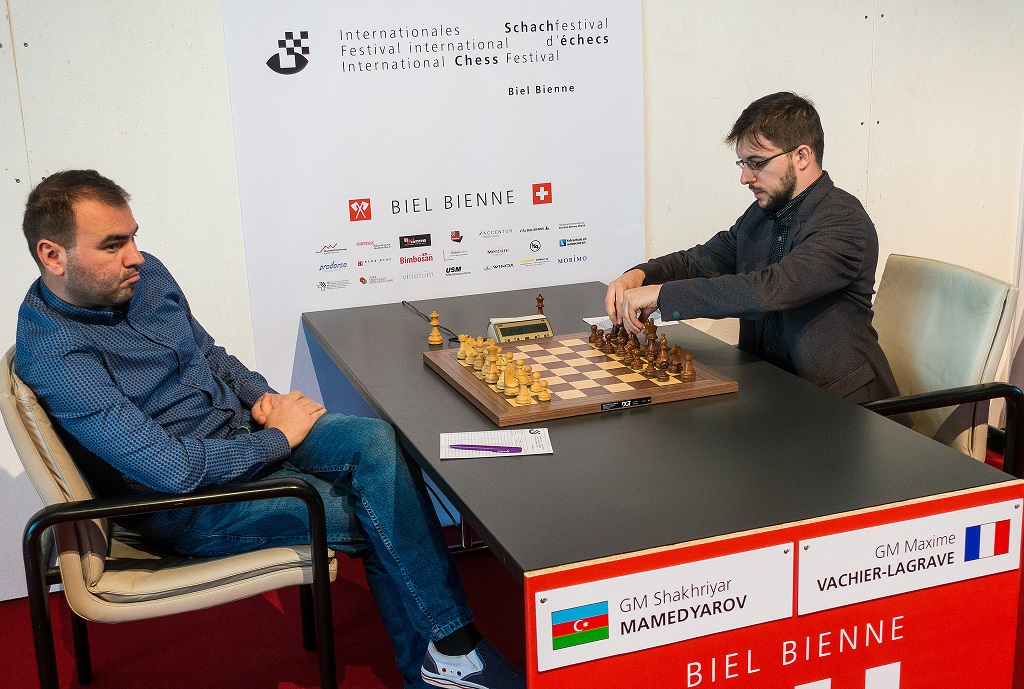 Did Mamedyarov know what was about to happen? | photo: Simon Bohnenblust, official website

A 26-move draw between two super-GMs was the most memorable game of the day, and the last one to finish! By move 6, we could already feel that something interesting was going to happen. Carlsen played 6.Bg5, going into one of the sharpest variations of the Najdorf. Svidler's body language demonstrated that he was not thrilled to have that on the board. He later commented:

When Bg5 appeared on the board, I thought maybe 2018 is not the best year to bluff a Najdorf against Magnus, because he probably has had reasons to take a peek at some point. [...] Bg5 is the main reason I stopped playing the Najdorf because of the amount of work you're supposed to be doing.

Carlsen was not expecting this opening:

I didn't really expect the Najdorf... It's not like I haven't looked at it, but I didn't look at it today. I felt that wasn't at the top of the list [of things Peter might play].

Niclas Huschenbeth has analysed the game in-depth. His take on this struggle is especially valuable, given the fact that this is his favourite variation in one of his pet openings: 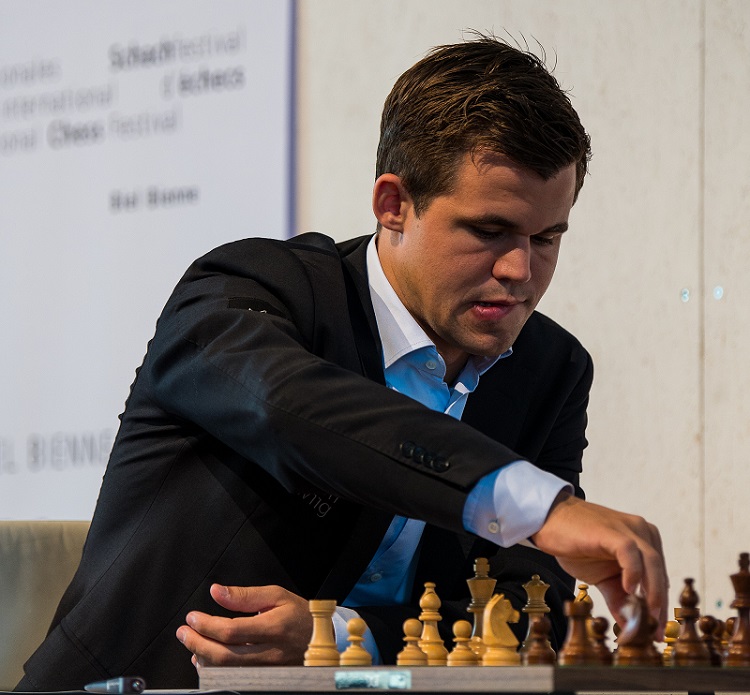 It was a wild struggle. As Svidler put it:

We agreed that we were never in control at any point of it, neither of us.

The standings after three rounds have Carlsen and Mamedyarov at the top:

It's been a great tournament so far in Biel. The rounds start at 14:00 CEST every day until next Wednesday (except Saturday - rest day - and Wednesday - last round 2 hours earlier). Don't miss the action live here on chess24!