There’s no doubt about it. Women’s World Champion Hou Yifan is serious and ready to fight for her place among the world chess elite. After accepting the gift of Anish Giri's dubious pawn sacrifice she already had an appreciable advantage after ten moves and energetically converted it into a win without for a moment being intimidated by the pseudo-activity of her opponent.

Hou Yifan may be a hundred points lower rated than her fellow junior Giri, but it looks more and more as if she has the potential to dramatically close that gap | photo: official website

Poland’s Radek Wojtaszek won with Black in an equal ending where his opponent, reigning European Champion Alexander Motylev, tried to push for more with a pawn sacrifice that rapidly left him worse. Vachier-Lagrave was also unlikely to have been satisfied with his experiment with the Trompowsky against Pentala Harikrishna. The Frenchman ended up worse in only a few moves and had to sweat to draw the game.

GM Jan Gustafsson and IM Lawrence Trent were once again on hand to make sense of it all:

It could hardly have been easier. Hou Yifan chose to give a check on b5 against the Sicilian in order to stifle Giri’s ambitions. The Dutchman appeared unprepared and sacrificed a pawn almost without thinking, which rapidly left him in a worse position. Anish himself acknowledged his mistake on Twitter almost immediately after the game:

1. e4 c5 2. ♘f3 d6 3. ♗b5+! Good choice! The "check", at one time a secondary line, is gaining followers. What makes it particularly advisable here? Well, it's a good option against opponents who are higher rated (so a draw wouldn't be a bad result) and are better prepared theoretically. That's very much the situation Hou Yifan found herself in here.

3... ♘d7 The most famous line in order to complicate the game - and one that Giri had played before.

4. d4 cxd4 5. ♕xd4 a6 6. ♗e2⁉ A relative surprise. The main move is to exchange on d7, but take note! In 2014 this move has only been played twice, but on both occasions it was by the same player - Magnus Carlsen second Laurent Fressinet. Carlsen himself used this check on b5 in his last game of the World Championship match against Anand, so this line is guaranteed to be of the very highest quality.

6... ♘gf6 7. 0-0 e5 Giri took seven minutes for this move, which suggests he was out of book, since Anish doesn't tend to think much in familiar territory.

8. ♕e3 d5⁈ This move, and the next, seem to have made impulsively.

9. exd5 ♗c5⁈ Once again played without thought. Giri wants to play very actively, but he doesn't have sufficient compensation for the pawn.

10. ♕d2 0-0 11. c4 Bolstering the d5-pawn. After this move Anish realised his mistake and thought for 40 minutes. His position is already very precarious since he has practically no compensation.

15. c5! Pushing forwards in the centre. It goes without saying that if White can consolidate with a protected passed pawn on d6 the game will be over.

28. ♘d5 With the white pieces about to break through on the kingside Giri resigned. A truly crushing win for the Women's World Champion, who punished the excessive confidence and impulsivity of the Dutch prodigy. This is a good game to study as it shows how even an excellent 2750-rated theoretician like Anish can end up lost in only 10 moves, without having spent as much as ten minutes on his clock. He's got a lot of years ahead of him to iron out such flaws!

There was also a Sicilian with a check on b5 in the game between Motylev and Wojtaszek, but in this case it was White who tried to force complications instead of settling for a peaceful and equal ending:

Motylev has already complicated matters a little and with his last move, 18.g5, he provokes tension on the kingside which doesn’t work in his favour. Black is now prepared to make use of the potential open file by an original doubling of rooks on the h-file, with Rh7 followed Rdh8. Faced with that he suddenly decided to go all in with 19.e5?! dxe5 20.Ne4, but the activity of his knight was insufficient and was outweighed by the two knight jumps of his opponent to c5 and d3, which decided the game.

Wojtaszek has now had the black pieces 5 times against Motylev. His score? 4.5/5! | photo: official website

You get the impression it was a day for experiments as Frenchman Maxime Vachier-Lagrave also played with fire. After only five moves the following position was reached in an unusual Trompowsky (1.d4 Nf6 2.Bg5):

Maxime no longer appeared to be sure what was going on as he thought for 16 minutes before his last move, 5.g4. He must have felt even less sure when his opponent Harikrishna responded with the strong: 5…e5! 6.Bxe5 Qh4 That gave the Indian a powerful initiative and left Maxime needing to fight for his life not to lose. 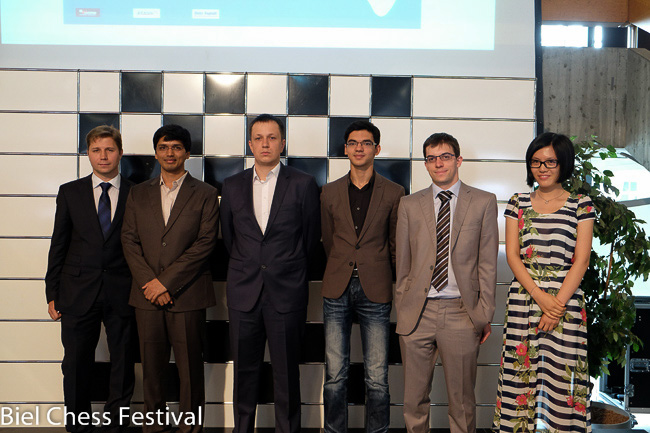 The Biel organisers have put together a fascinating line-up of ambitious players, some of whom have struggled to get super-tournament invitations despite their impressive ratings | photo: official website

So overall it was a first round where some players failed to perform at their usual level and got punished for it by their opponents. The tournament looks finely poised, with no clear favourites in any of the games.

Round 2 sees a clash of the two early leaders, Radek Wojtaszek and Hou Yifan:

Don't miss all the action in our Biel broadcast!