It was the cleanest way to take home the trophy, and Shakhriyar Mamedyarov managed to pull it off. He defeated Magnus Carlsen in the penultimate round and secured a two-point lead that converted him into this year's Accentus Tournament Champion in Biel. Thanks to his +5 performance in nine rounds, Shak achieved his highest ever live rating. The other two games of the day were drawn. 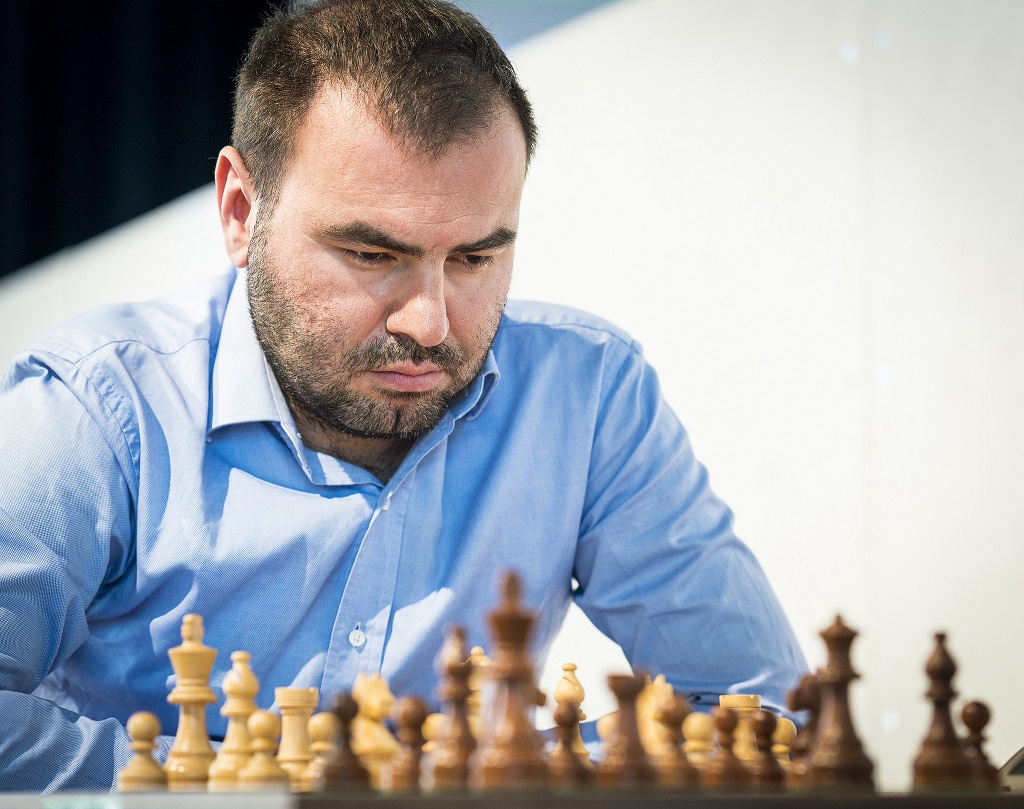 The theme of the game was Carlsen's risky play, as it was clear that he wanted the win badly despite having the black pieces. Mamedyarov, in contrast, played solid controlled chess. First, Magnus tried to enter a King's Indian Defence, but Shak rejected the idea of getting into a sharp battle, something he made clear when he played 8.e3:

Mamedyarov later commented while talking about his cautious pawn push:


I don't like this move normally, but with this move I got a normal position.

Carlsen got what he wanted, though, as both players agreed that he got a good position out of the opening. It was the kind of position that a cool-headed Carlsen would have perhaps taken advantage of in other situations. As Magnus himself expressed, however, his will to win worked against him. For example, on move 19:

From that point on, Mamedyarov was in charge, and he managed to steer the game into a rook endgame with bishops of opposite colours and 4 vs 3 pawns on the kingside. It was clearly a difficult endgame to win, but the oversights continued for a frustrated Magnus, who finally blundered on move 56:

Carlsen had to keep the bishop on the a3-f8 diagonal in order to give it away for the dangerous e-pawn — he mentioned in the press conference that it would be very hard for White to win the endgame despite having an extra piece for Black's doubled h-pawns. Instead, the World Champion played 56...Bc1?? and resigned after 57.e7.

Shakhriyar Mamedyarov has had an amazing tournament in Biel so far (let's not forget that they will play one more round), getting an undefeated +5 against a strong field that included the World Champion. As he declared, "...this was probably [my] best tournament". 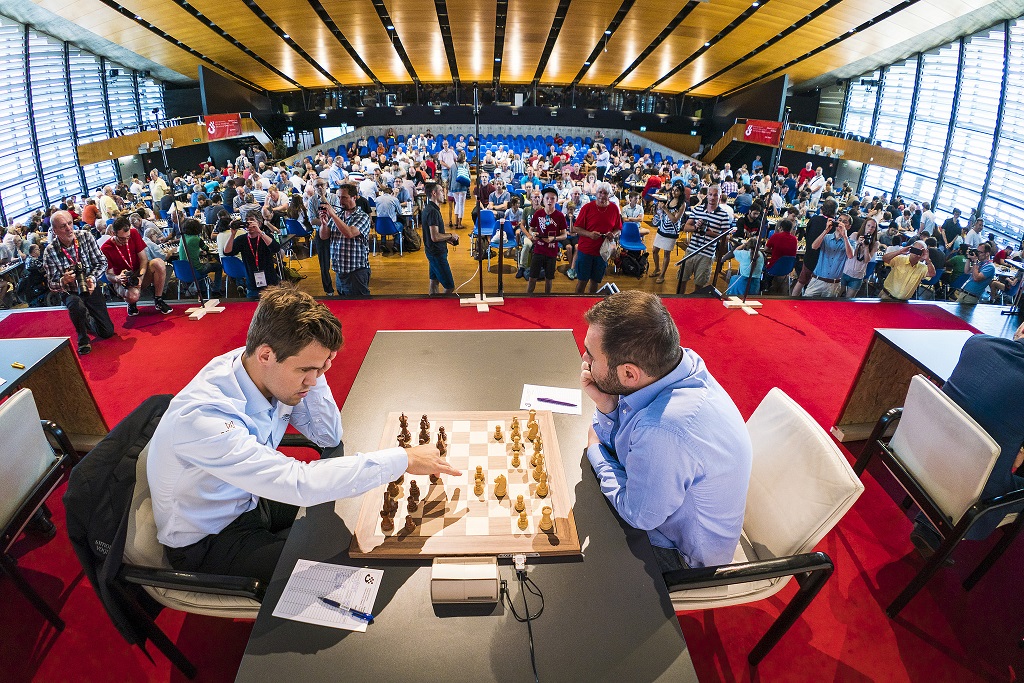 It was so good that he achieved his highest ever live rating. In fact, he is currently decimal points away from leapfrogging above Vladimir Kramnik in the historical list of peak ratings:

Meanwhile, Carlsen showed his frustration during the post-game press conference, something that Nico Georgiadis probably will need to take into account for his last round encounter against the Norwegian:

This was the shortest game of the day. The strategical battle in the opening was defined by Svidler's choice on move 11:

The Russian Champion played 11...d5, relieving the central tension and exchanging the queens shortly afterwards. In the press conference, Svidler declared that he was trying to get a position that would seem familiar to him, which in his case would be a structure that somehow resembles a Grünfeld. And he managed to do it, partially.


When the queenside pawns were exchanged, however, there was nothing left to play for. The draw was signed on move 40. 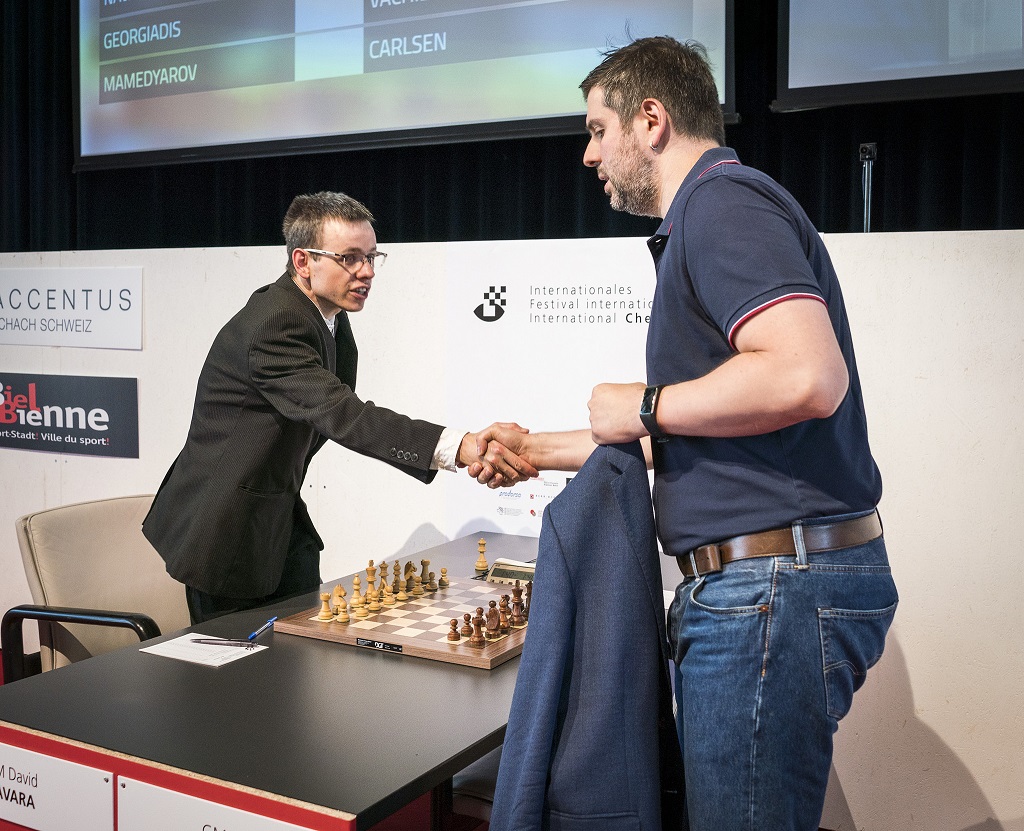 After Magnus's loss, Svidler is now sharing second place with the Norwegian. Peter will finish the event with White against Mamedyarov. Will he spoil Shak's perfect tournament?


MVL used his beloved Grünfeld, but faced a well-prepared Georgiadis. Black obtained the queenside play typical of this defence, but after the queens were exchanged, it didn't seem like any of the players had an edge in the position:

At this stage, Vachier-Lagrave started untangling his pieces to push his queenside pawns, and it seemed like he was ready to try to grind down Nico, but the Swiss grandmaster was resilient in defence and avoided slipping in the endgame. With rooks and light-squared bishops still on the board, the players agreed to a draw on move 42. 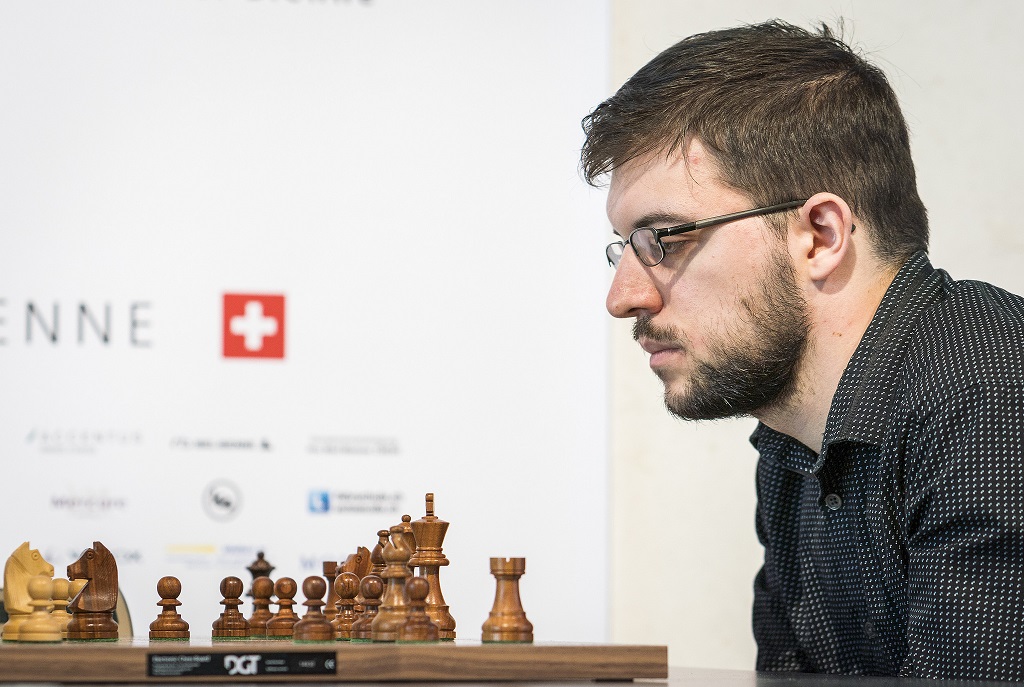 As mentioned above, Georgiadis will finish the tournament facing the tough task of having Black against the World Champion, while MVL will have White against David Navara.


The standings show how dominant Mamedyarov's performance has been in Biel: