A very exciting round was played on Sunday at the Accentus GM Tournament in Biel. Shakhriyar Mamedyarov and Peter Svidler won their games, while Magnus Carlsen and Maxime Vachier-Lagrave drew after a hard fight. That left Mamedyarov with a one-point advantage over the World Champion with three round to go. 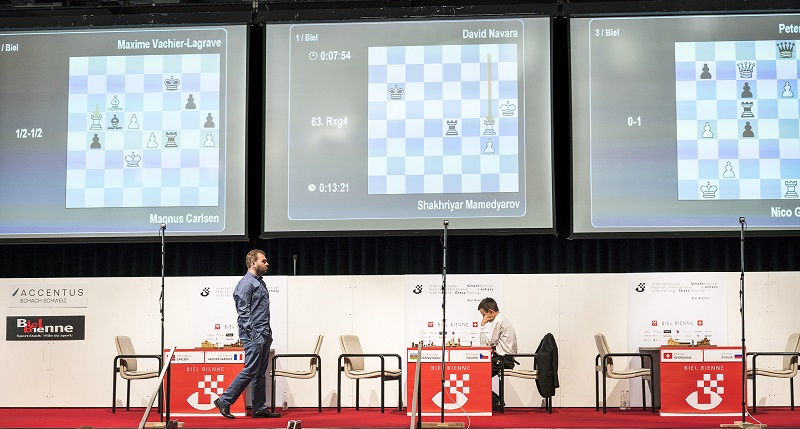 It was a long one, but it ended well for Mamedyarov | photo: Lennart Ootes, official website

Vachier-Lagrave worked as Magnus's second in the last World Championship match, but their friendship didn't stop them from playing two fighting games in Biel. In Round 7, Maxime used one of the weapons that helped him climb to the very top of the ratings list, the Najdorf. Trusting his deep knowledge in this variation, he left the usual paths and went for something a little unconventional. As he put it:

I tried a little experiment in the opening that was a little dubious but that gave plenty of play.

After 28 moves, White had gained an advantage and created threats on the queenside, while Black had the initiative on the opposite flank. Here, Magnus made a decision that he would later regret:

Carlsen took the free pawn with 29.Rxa5, which allowed Black to penetrate his position with 29...Rb3. When Magnus took the pawn, he thought that it wasn't possible for Black to go ahead with that manoeuvre. He explained:

Basically I missed that the d3-square existed, which is pretty unforgivable. [...] I was terrified.

With the black rook dominating the third rank and White's light-squared bishop totally out of play, MVL had the chance to push his f-pawn and create threats against his opponent's king. When the pawn was already on f3, Carlsen played 32.h4, attacking the knight:

This is where Black could have converted his initiative into a devastating attack, either with 32...fxg2 or 32...Rd2. He chose 32...Nf7 instead, but didn't really regret his decision later on, as the lines that followed 32...Rd2 were too hard to find for a human. MVL declared:

I cannot blame myself for not seeing this computer win. That's just very difficult. 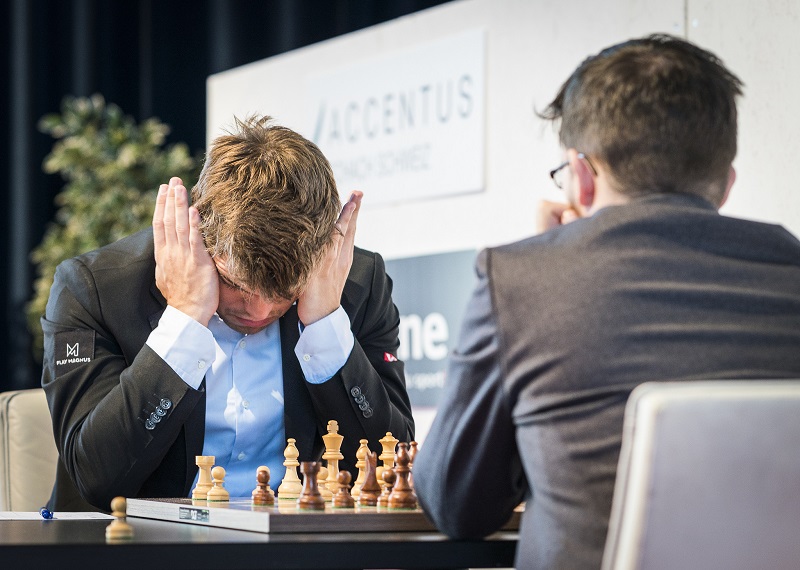 Exchanges followed and the players went into a drawn endgame where both had to be careful to avoid getting into trouble. They both showed their class and ended up signing the draw after 49 moves. Carlsen summarised how he felt:

I was very optimistic at the start, probably over-optimistic [...] I feel pretty relieved to have escaped.

This was another Najdorf, something that illustrates the fact that we have seen very combative chess in Biel. In this case, however, the player that chose the counter-attacking defence with Black was not as happy with his choice as Vachier-Lagrave. Peter Svidler told the commentators afterwards:

Black's decision on move 8 was critical:

Svidler has just played 8...e5, to which Georgiadis answered with 9.Nf5. This might not seem like a very important moment, except for the fact that Nico wasn't prepared for it, something especially relevant in such a sharp position. The Swiss GM confessed that this was the exact line that he hadn't re-checked before the game.

White went for the initiative on the kingside, but Black defended accurately. This was the position after 11...Bxg4:

Georgiadis answered with 12.f3, something that Svidler hadn't considered — he calculated 12.Qd2 exclusively. The game continued 12...Bxf3 13.Qxf3 Rxh6 14.O-O-O Nc6, and Nico decided to go for the throat:

With 15.Bxa6, White forces Black to waste a move taking the bishop and quickly creates play on the f-file. After 15...Rxa6, however, Nico chose the wrong rook with 16.Rhf1, and after 16...Nd4 he gave up the exchange with 17.Rxd4. White's attack is dangerous, but Svidler defended accurately and forced Georgiadis' resignation after 28 moves. 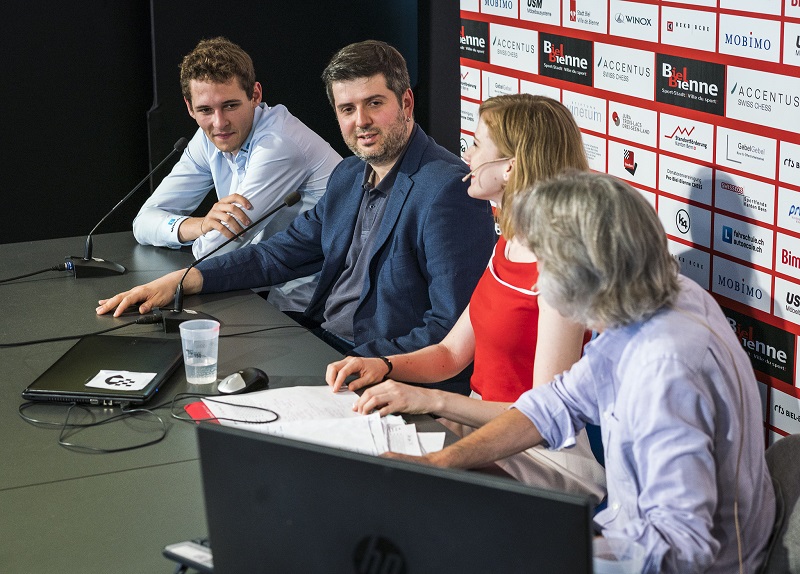 In contrast to the Najdorfs on the adjacent boards, this was more of a positional grind by the sole leader. During the opening and the middlegame, Navara compromised his pawn structure by advancing on the kingside, which became an important factor later on, when the players reached a rook endgame:

White has just taken the a-pawn with 37.Rxa6, and one would think that the connected passed pawns should be more than enough to win comfortably. However, it's well-known that winning rook endgames is never easy. Eventually, White got Black's f-pawn in exchange for his a-pawn and started advancing on the b-file.

From the position shown above, Shak had to make 31 more moves to force Navara's resignation. The final position: 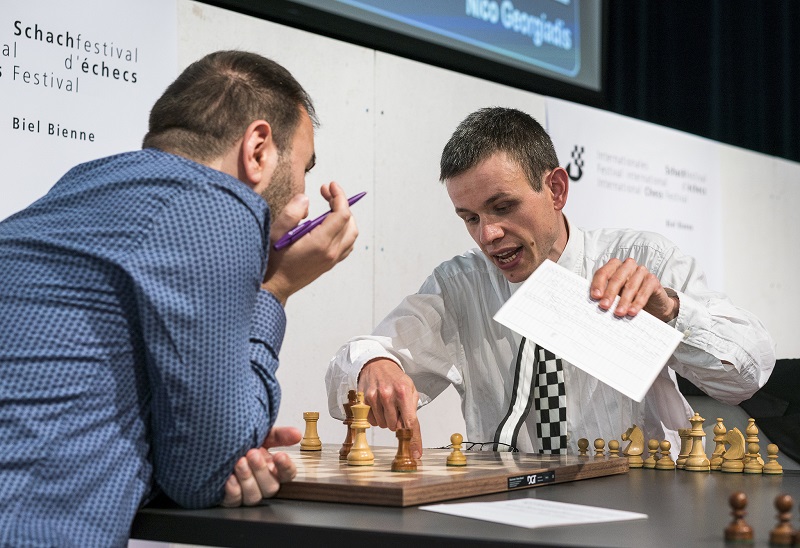 The standings after seven rounds don't include any ties in points:

The leader will have Black against MVL in the eighth round, while Carlsen will try to close the gap in the standings by beating Svidler. Don't miss the action live here on chess24!