Shakhriyar Mamedyarov defeated Nico Georgiadis with Black to become the sole leader at the Accentus Biel GM Tournament. Meanwhile, David Navara drew Magnus Carlsen, and Maxime Vachier-Lagrave took down Peter Svidler after the Russian went astray in, according to himself, "self-mate fashion". The players mentioned that they were tired, and they seemed eager to finally get a rest day. 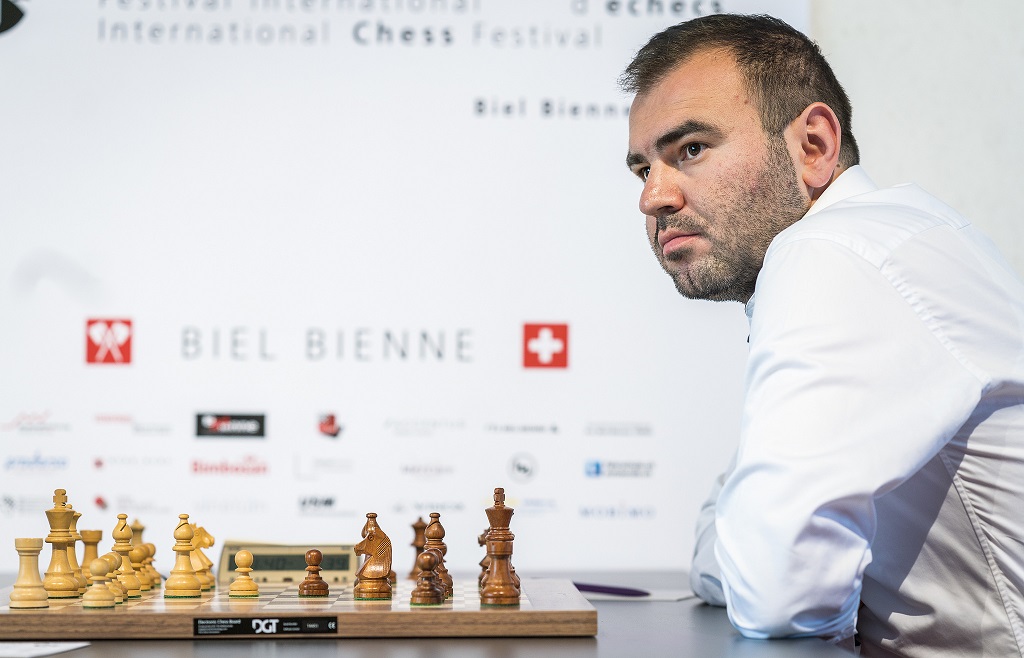 Shak has three wins and no losses so far in Biel | photo: Lennart Ootes, official website

The World Champion played 4...c5 against Navara's Queen's Gambit, a move that surprised the Czech player. The commentators were also surprised, as they expected Magnus to play something more ambitious. When asked about this, Carlsen gave a clear and simple explanation:


I was just exhausted after the many long games in a row, so I just wanted to play something simpler. [...] I feel like I did suffer a bit today, so I was hoping to avoid that. In that sense, it was not a success.

The players arrived in an endgame with a rook, a knight and six pawns per side, and none of them could really create enough imbalances to claim an advantage. The passed pawns on the a and d-files balanced each other out:

We saw a happy Navara in the press conference after the draw was signed on move 45. He declared:

Okay, a draw against the World Champion is a good result.

After confessing that he will try mostly to relax during the free day, Carlsen mentioned what he's planning for the rest of the tournament:

Now I'll try to regroup, and I'll be getting back to business after the free day. 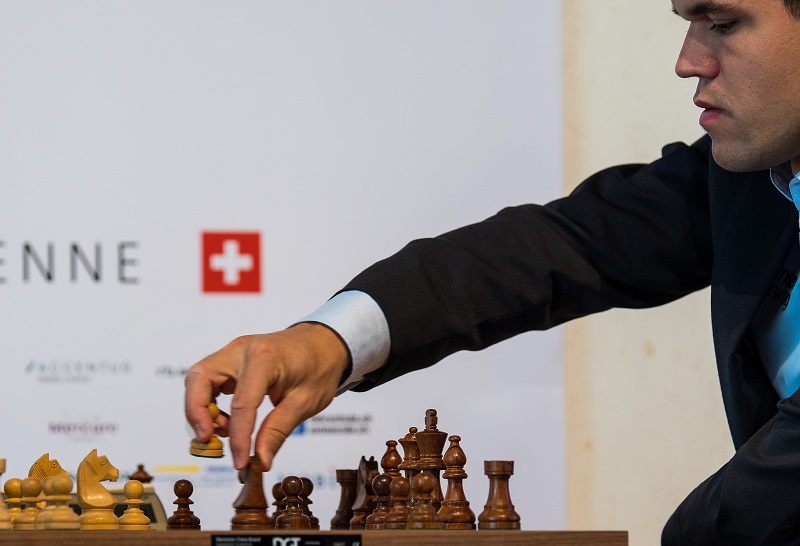 The World Champion will surely try to get the lead back after the rest day | photo: Simon Bohnenblust, official website

The players continued an opening discussion that started during last year's World Cup. Svidler deviated with 9.d3 instead of 9.h4, and felt that he left the opening with a good position, but then he got too ambitious and got himself into trouble:

My downfall was that I saw this idea of playing e5. If I don't notice this exists, I'd never lose this position because I have no weaknesses and... just Ke2 Rac1 and nobody's better.

While discussing what went on in the opening, Peter gave his colleague and friend a tip after confessing that he has no plans of repeating this opening against him. He was referring to the fact that Black didn't play h5 to stop White's expansion on the kingside:

After scoring 0.5/3, I'm probably giving up on playing this against you, so I can tell you: there is really nothing wrong with playing h5 in this position. Just nothing at all.

When Black was already for choice but by no means winning, the Russian champion miscalculated and quickly found himself in a losing position:

Svidler played 28.g4, and after 28...fxg3 Black has a big attack against the king with the rooks on the f-file and the light-squared bishop on the long diagonal. Peter's resignation came quickly, on move 31. 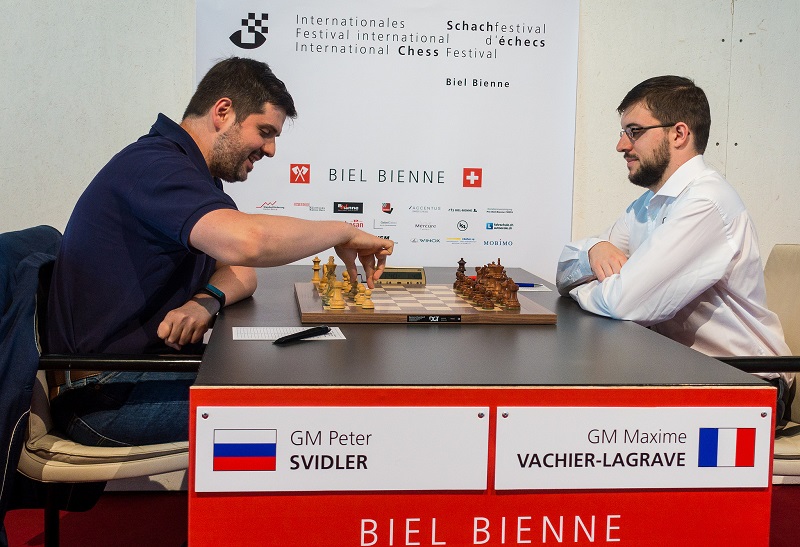 These two clearly get along | photo: Simon Bohnenblust, official website

As usual, chess24's star commentator was very eloquent when he explained what had gone wrong:

I just had this absolute blackout, where I spent over 20 minutes looking for the most secure way to make a draw, and what I ended up doing basically allows mate-in-5 with checks.

Basically, a nice little help-mate study was my contribution to the world today.

When he was asked about his plans for the rest day, the Russian confessed that he most likely will have an appointment with a doctor:

I am assuming I have a doctor's appointment tomorrow. I'm an old man. I have, you know, aches and pains and ailments of all kinds.

These two players are now at both ends of the standings, as Mamedyarov is the clear leader and Georgiadis is in the cellar. Shak played the Najdorf with Black and obtained good play on the kingside. On move 21, the obvious plan for him was to advance the g-pawn:

Mamedyarov continued with 21...g6, which provoked Danny King to ask him why he hadn't chosen the direct 21...g5. His answer was completely logical:

A critical moment in the game was reached a couple of moves later, when Georgiadis missed a chance to trade one of the strongest black pieces:

Nico played 30.Nc3 instead of capturing the knight on f5. This allowed Mamedyarov to put his knight on  d4, where it controls many key squares. According to Shak himself, had White taken the knight on f5, "White is simply better".

Shak's attack was straightforward and effective. The players shook hands after 39 moves. 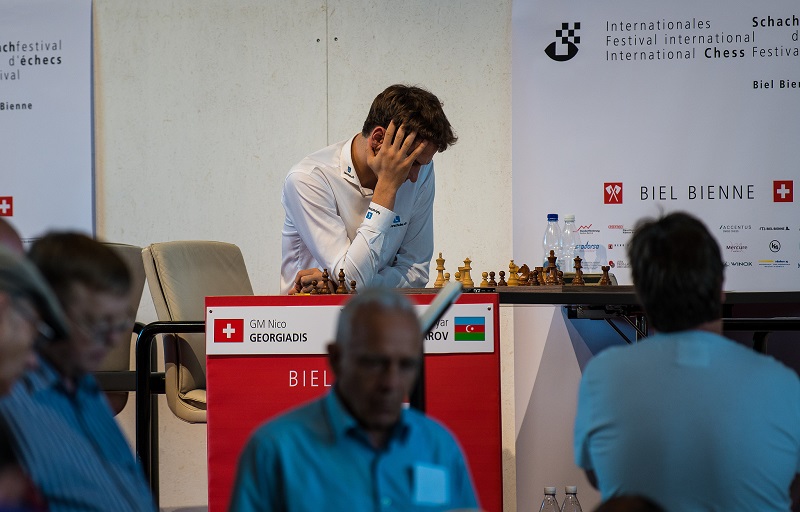 On Friday, many players mentioned how tired they were after playing six consecutive rounds. When Mamedyarov was asked about his physical condition, he gave an explanation as to why he sometimes has more energy than some of his colleagues:

My big advantage is that I started playing chess too late, when I was 9. I like to play chess. When you start at 4-5, by 33 you think you've played too much. But now I'm like some 26-27-year-old players.

Nico was then asked how important physical fitness is for chess players. He quipped:


Yes, I think it's quite important... but I think this is not my problem. I think I have other issues (laughs).

The standings after six rounds:

The final four rounds will be played from Sunday until Wednesday after the players recharge their batteries on Saturday. Don't miss the action live here on chess24!