The fourth and fifth rounds of the Accentus Biel GM Tournament left things mostly unchanged. Three draws were signed on Wednesday, and only Maxime Vachier-Lagrave scored on Thursday. Magnus Carlsen and Shakhriyar Mamedyarov are still leading, while Nico Georgiadis only has half a point so far. 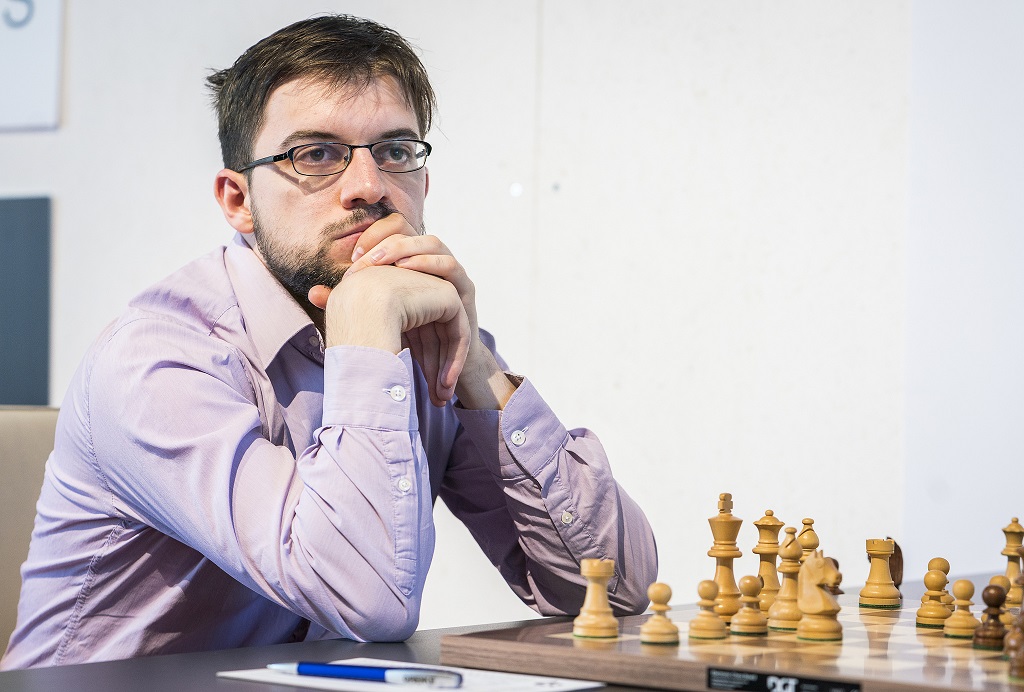 Round 4: Georgiadis holds against the World Champion

Magnus Carlsen played the French Defence with Black against tail-ender Nico Georgiadis. A sharp and unique position was reached quickly after the players left the opening phase of the game. Magnus eventually won an exchange, but then couldn't find a way to convert it into a larger advantage. Credit must be given to Georgiadis for playing that sharply against his feared opponent, and for holding an inferior position. 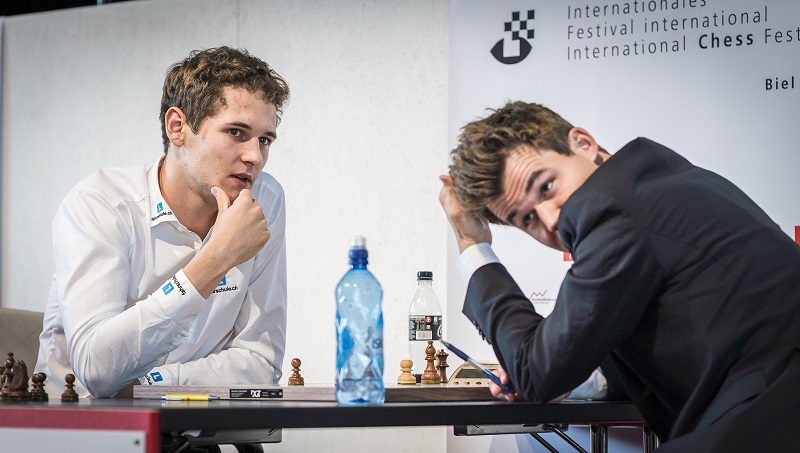 Magnus, naturally, pushed for more in an equal endgame. In move 41, he tried to sacrifice a pawn to get more play, but Nico rejected the offer:

Black has just played 41...f4 and Georgiadis answered with 42.Bf2. The game lasted eighteen more moves, but it was clear that it would eventually be drawn.

In an interesting Grünfeld, Navara was a piece up against Maxime Vachier-Lagrave. However, White's king was completely exposed in the middle of the board. MVL found a perpetual on move 25:

Black swung his rook from d3 to d5, threatening mate either on a3 or a5. Navara could only agree to the threefold repetition playing Rb3 and Rb5. 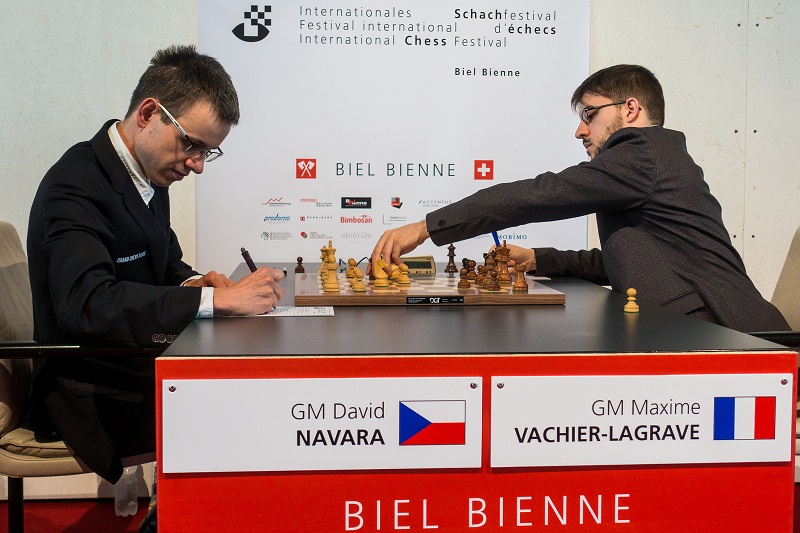 Round 5: MVL gets his first win

Having White against a struggling Georgiadis, Vachier-Lagrave went for a line in the English Opening that offers White a lot of play, even though he has to sacrifice a pawn at some point. Nico rejected the pawn, but was left in an inferior position anyway. Soon afterwards, MVL himself managed to snatch a pawn:

White played 19.Qb1, creating a double attack against h7 and b6. Black continued with 19...Bf5 and White took the b-pawn. Now White has a passed pawn on the queenside, and MVL didn't have much trouble combining it with other threats to get a winning advantage. The game finished when Georgiadis missed a knight fork:

Black has just played 35...Rxc5, and Vachier-Lagrave only needed five seconds to play 36.Rd8+. Nico resigned in view of the easy 37.Kg7 Ne6+, winning the rook. 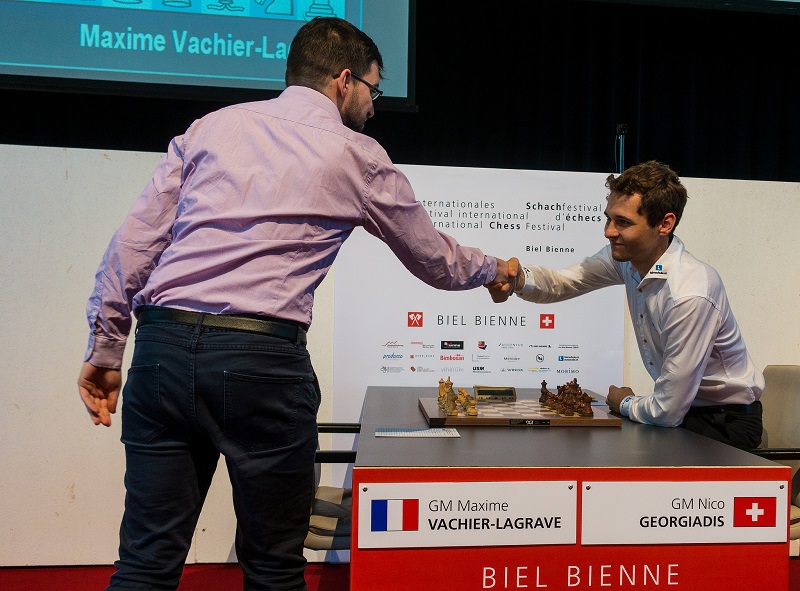 In the key match-up of the day, Carlsen and Mamedyarov delved into a highly strategical Ruy Lopez. In the late middlegame, Magnus traded to get a passed c-pawn for Shak's slow central pawn. The Norwegian tried to squeeze this advantage in a queen's endgame with bishop against knight, but Mamedyarov defended precisely. The players agreed to a draw in the following position: 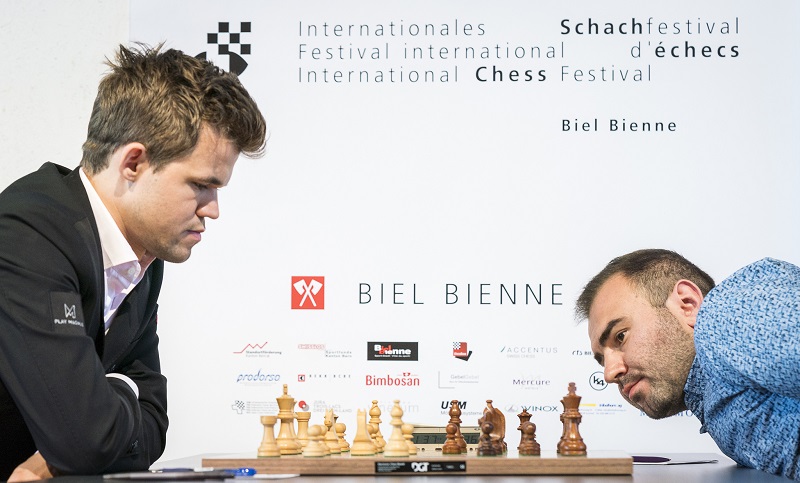 Finally, Svidler got the pair of bishops against Navara. The Russian champion tried to make the most of his advantage, but Navara held the draw rather comfortably.

So half the tournament is over and the standings look as follows:

There's a lot of expectation for the second half of the event after what we've seen in Biel. The rounds start at 14:00 CEST every day until next Wednesday (except Saturday — rest day — and Wednesday — last round 2 hours earlier). Don't miss the action live here on chess24!