The Accentus Biel GM Tournament finished this Wednesday at the Congress Centre of the Swiss town. Shakhriyar Mamedyarov closed out his excellent tournament performance with a draw against Peter Svidler. The other two games were won by the rating favourites in each match-up: Magnus Carlsen and Maxime Vachier-Lagrave defeated Nico Georgiadis and David Navara. With these results, the World Champion finished in sole second place behind Mamedyarov. 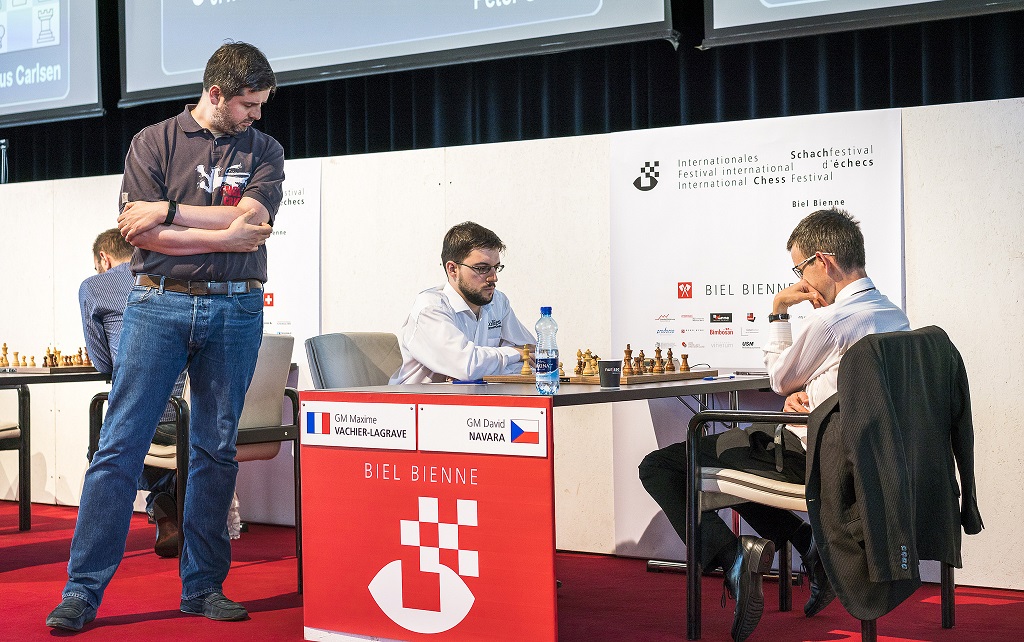 Double round robins are increasingly less frequent in the chess elite — in fact, even the best in the world have started to participate in open events. The fact that the players can prepare dedicated opening schemes to face their opponents inhibits the organisers from risking having tournaments with too many draws. However, in Biel we saw none of that.


The ten-round affair included 14/30 decisive games with many fighting draws. Perhaps one of the key factors for success was the presence of a less restricted mixture of players. In the end, the standings showed the participants almost perfectly arranged according to their ratings — only Mamedyarov and Carlsen "switched places" — but that didn't mean that there was a lack of excitement.


Apparently, a carefully chosen line-up and a physical environment that motivates the players to show their best are approaches that bring good results.


On to the games. 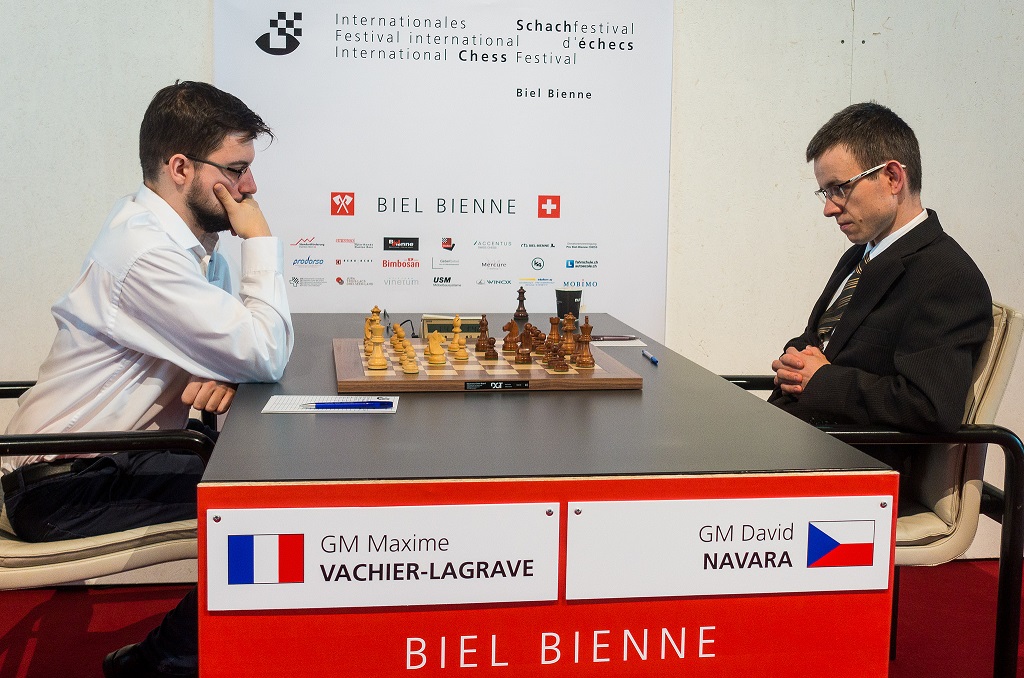 With his last round win, Vachier-Lagrave recovered from his bad start and managed to lose only 0.6 rating points. In the press conference, he declared that in the middle of the event he felt that his chess "came back to him" after about six months of him feeling that things simply didn't work out as expected.


On the other hand, Navara's tournament went downhill, as he felt his play deteriorated after the rest day. He finished on -2 and dropped 9.6 rating points in Biel. The Czech player will have a chance to recover quickly, however, as he's participating in the Spanish League starting next Monday.


In the game, MVL obtained "a good version of the Italian" after Navara was imprecise with his move order. White got the initiative on the kingside and gave up a knight to continue his attack on move 20:

With the white queen deep in Black's camp, the loss of the knight after 20...gxf5 gave great attacking chances with the far-advanced f and g-pawns. Navara avoided getting mated quicker by forcing an exchange of queens, but couldn't defend against the white rooks aligned on the seventh rank. Black resigned in the following miserable position: 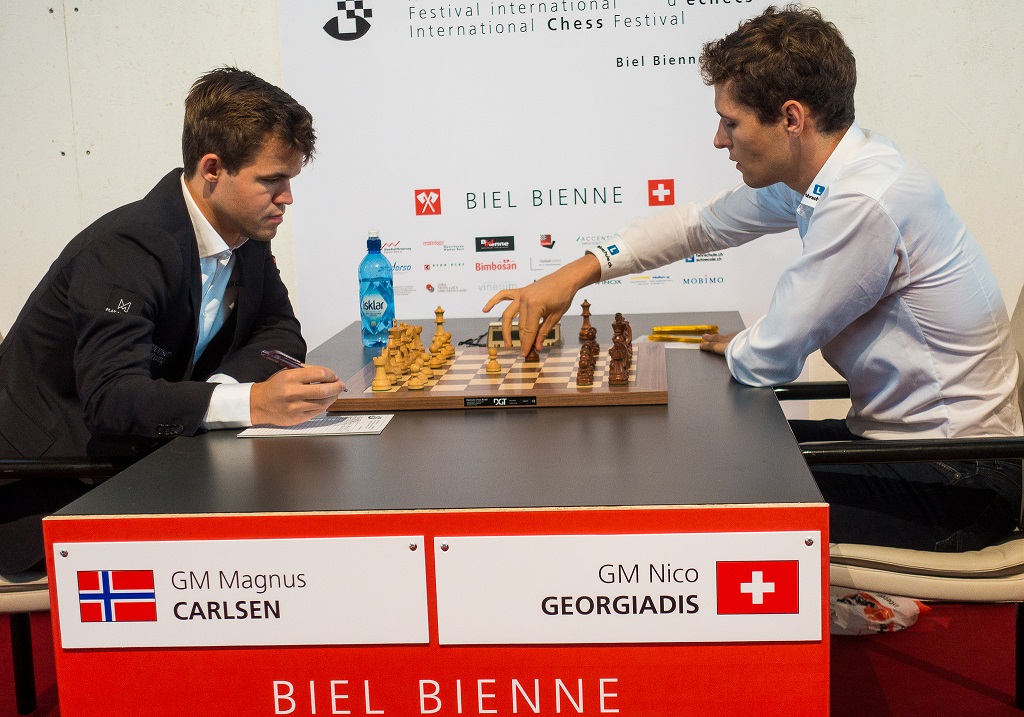 Georgiadis had a good position but blundered in the end | photo: Simon Bohnenblust, official website

It was a very peculiar tournament for these two players. Carlsen, on the one hand, started showing some powerful chess to win his first two games and then couldn't make the most of his chances in the rest of the tournament. Georgiadis, on the contrary, managed only three draws in the ten-round event.


For Carlsen, this meant that his advantage in the rating list decreased to 14 and 19 points over Caruana and Mamedyarov, respectively. He played very enterprising games, however — something that might create a heavier burden for Caruana's team before their match in November.


In the game, Magnus used a rarely seen variation of the Sicilian with 2.Na3. On move 7, the Norwegian chose to lose the right to castle by playing 7.Kf1. The experiment didn't favour the World Champion, as Black obtained a good position in the middlegame. However, it did make Nico think a little too much, as he was down over 40 minutes on the clock. When they reached the time control, they had arrived in a balanced endgame:

The game seemed to be heading to a draw when Georgiadis committed a one-move blunder that reminded us of Carlsen's oversight in his game against Mamedyarov:

Black could have continued with 46...Be5, 46...Kg6 or the straightforward 46...bxc3 to maintain equality. Nico went for 46...b3 and resigned after 47.Nf3, as there's no way to defend the pawns unfortunately placed on light squares. 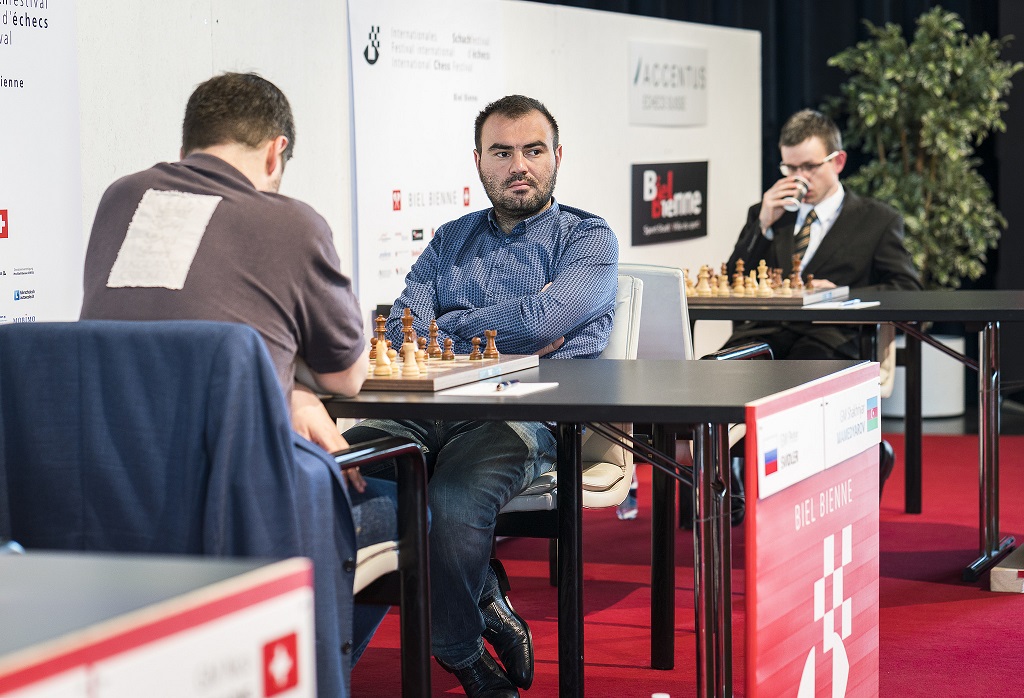 Mamedyarov has shown that last year's streak of good results was definitely no fluke. The Azeri player remained in the "2800 club" all this year and is now threatening to steal Caruana's second place in the ratings list. This was simply an incredible performance by Shak, who not only finished with an impressive +5 but also had things under control in almost all of his games.


Svidler, meanwhile, won two and lost one to finish in shared third place. He played more than a couple of interesting games, trying his hand at sharp Najdorfs, showing that age doesn't stop him from calculating accurately in messy positions. Obviously, he also shined in the post-game press conferences.


The game saw a quick exchange of queens. White had the bishop pair but also a deficient pawn structure. A balanced evaluation remained throughout the game and the draw was signed in the following position:

The chess action continues in August: the Danzhou GM Tournament finishes on Friday, the British Champonship will be decided on the weekend, the Abu Dhabi Masters starts on the 7th, and the Grand Chess Tour events in Saint Louis will kick off on the 11th.