Etienne Bacrot went into the rest day as the sole leader in Biel after crushing wins over Alexander Morozevich and Noel Studer, though the latter game almost went awry in some time trouble mayhem. Hou Yifan is also flying, adding to her opening day win over Alexander Morozevich by picking up the scalp of David Navara in Round 5. The Czech no. 1 had previously beaten Peter Leko, but is struggling for consistency… except in the matter of appearing for post-game press conferences, whatever the result. 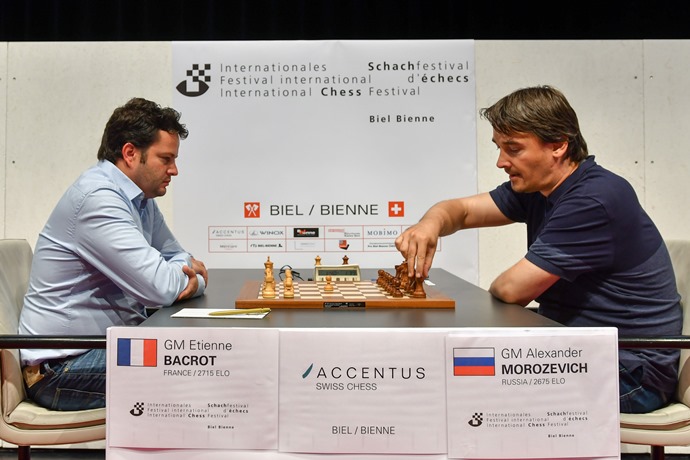 Rounds 4 and 5 in Biel were bloodthirsty, with only three draws in 10 games. You can replay all the action using the selector below – click a result to open the game with computer analysis, or hover over a player’s name to see all their results so far:

Only one game ended drawn in Round 4 – Ponomariov-Hou Yifan – though that could also easily have been decisive after Ruslan Ponomariov went for a risky attempt to mix things up. Elsewhere there were demolitions on all boards, with Harikrishna needing only 24 moves to overwhelm Switzerland’s Noel Struder after playing a familiar f5-pawn sac in the French.

Harikrishna grabbed his only win of the tournament so far - he's drawn his remaining four games | photo: Biel Chess Festival

Danny King took a look at that game:

The most beautiful and significant game of the day was Etienne Bacrot’s triumph over Alexander Morozevich, which would have a strange parallel a day later in Jobava-Short from the Xtracon Open in Elsinore, Denmark:

In the first position it’s already clear that Nigel’s days are numbered, so he might at least have salvaged something from the debacle with 32…a6!, when the English no. 3 would have managed to put all his pieces on the same colour squares… not such a common occurrence in the middlegame! Which brings us back to Biel, where Alexander Morozevich’s 15…d5?! break in the Sicilian backfired horribly:

Bacrot pushed 16.f4! and 17.e5 and again it became a case of White dominating on the dark squares while Black’s pieces were helpless bystanders on the light squares.

In fact for a number of moves Black was already only a sacrifice of his dark-squared bishop away from having all his piece on light squares, while Bacrot emphasised his utter control with 32.Qd6!

Again, Black has absolutely nothing he can do, since capturing the queen leads to a trivially won ending, while the black king is comically helpless against White’s mating, and other, threats. Once again Moro could have scored a small aesthetic victory by shuffling his queen to a light square, but it seems these guys just don’t care – Bacrot also stubbornly kept his a-pawn on its starting light square for the whole game…

This time the game stopped with mate still five moves away, but it was just as convincing as the game in Denmark:

David Navara showed how you should go about a break on d5, with 22.d5! against Peter Leko:

The black pieces scuttled away until the d-pawn was able to make another stab at Black’s heart with 30.d6!

White was soon able to sac a piece on f7 and catch Black in a mating net – a game well worth playing through! 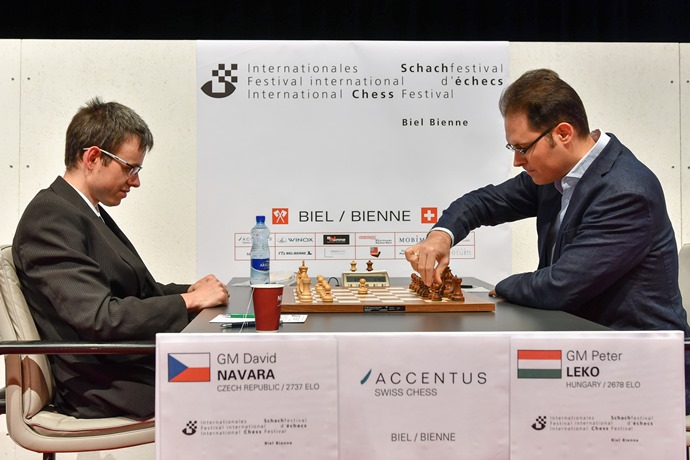 Navara and Leko have both had very mixed tournaments so far | photo: Biel Chess Festival

That just leaves the first win, after three draws, for local hero Nico Georgiadis, who found some fine tactics to convert his positional advantage against Rafael Vaganian into a win: 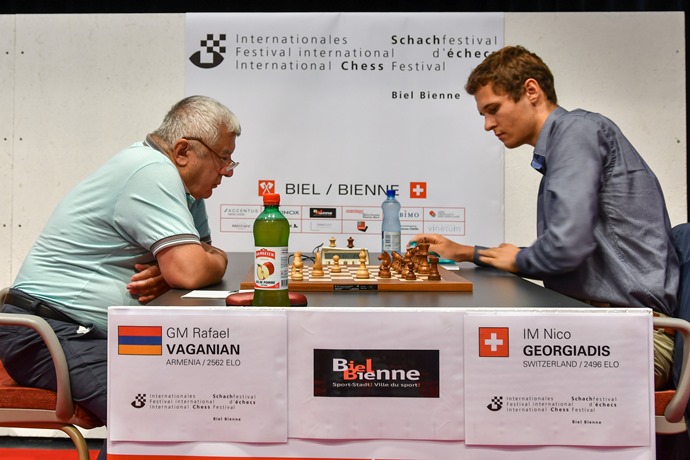 Nico gets his first win against a man who won the event 32 years ago in 1985, when it was an interzonal featuring the likes of Yasser Seirawan and Nigel Short | photo: Biel Chess Festival

65-year-old Vaganian’s fortunes didn’t improve in Round 5, as he confessed to a tragicomic oversight in an already tricky position:

Here Vaganian thought Alexander Morozevich had played 16.Qxe2, not 16.Rxe2, and blitzed out 16…c4, only to realise that the queen was still on d1 and Morozevich could simply pick up a pawn with 17.Bxa4. The game wasn’t much of a contest after that.

It looked like Studer-Bacrot would also be a massacre after Etienne exploded the position with 23…f5!

Essentially it was, but things got messy, as Danny King explains!

The day’s other win was for Women’s no. 1 Hou Yifan, who is quietly repairing the rating damage done by five losses in the Geneva Grand Prix. She beat Morozevich in Round 1, drew her next three games, and then won an almost Carlsen-esque game in Round 5 against David Navara.

The Czech no. 1 played the Najdorf, but Hou Yifan was able to maintain control across the board until 29.Qd2 got out of a pin and asked a simple question: how are you planning to defend the a5-pawn?

Hou Yifan handled the rest of the game with consummate ease, to take clear second place behind Etienne Bacrot:

There are now four rounds to go, starting Sunday, and it’s not going to be easy for a Frenchman to win the event for the fifth year in a row (MVL did it the last four!) – after playing Peter Leko and Hou Yifan, Etienne’s last two games are against top seeds David Navara and Harikrishna.

Don’t miss all the action here on chess24! You can also follow the games in our free mobile apps: