David Navara leads the Biel Grandmaster Tournament after winning one of those games that redefines what’s possible on a chessboard. Radek Wojtaszek did his part by playing good, logical chess but couldn’t punish the white king for wandering all the way to h8, alone, on a board full of pieces. We have Jan Gustafsson’s analysis and an interview with Navara. Elsewhere Pavel Eljanov beat Michael Adams in another hugely complex struggle. 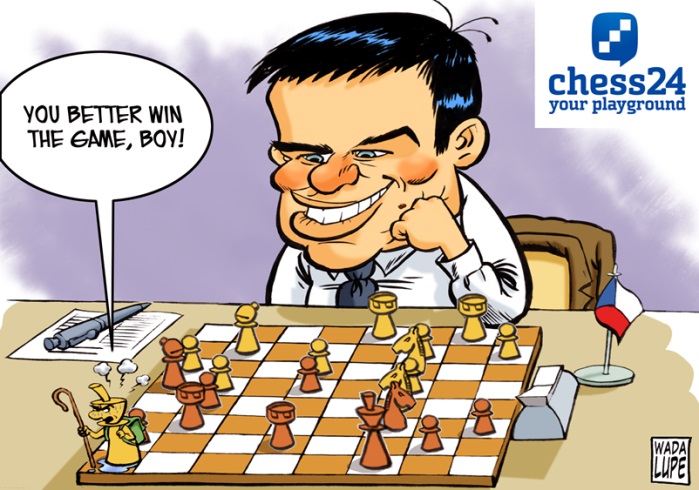 Spanish cartoonist Andres "Wadalupe" captures the moment Navara's king has completed its extraordinary march to h8... little did it know it would have to come half the way back again before the game was over!

We can’t do anything but start with the game of the day, week and possibly much more. Here’s Jan’s analysis, in case you haven’t seen it yet – he was considering calling the video, “King March of the Century”: 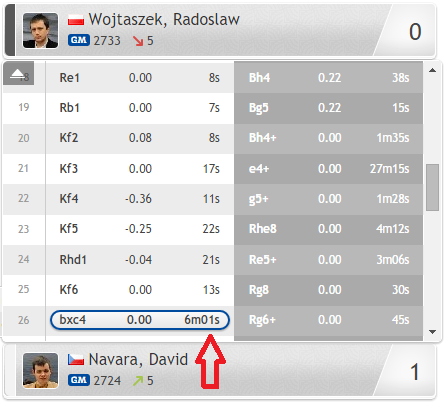 Wei Yi’s recent masterpiece had the benefit of mystery – no interviews with the player have yet appeared in English and the broadcast didn’t include the times taken for the moves, so we still don’t know how far the Chinese wunderkind had seen in his preparation before the game. It was very different in Biel. We didn’t even need Navara’s confirmation afterwards that everything up to 25.Kf6 had been part of his pre-game analysis, since 26.bxc4 was the first move of the game on which he spent more than 34 seconds (and he was averaging about 10). He later explained that rapid-fire delivery was partly to offset any possible accusations of computer cheating!


The game was in fact a textbook demonstration of something Vishy Anand said about computers in an interview earlier this year:

There were many positions we were unable to explore because they were so complicated, so we were doing it in our own slow way, which is to play a game, see what happens, play a second game, see what happens… but computers have opened up so many things. They also close a few doors, but they open far more than they close, and at the moment I would say chess is richer than ever before.

There were various versions of how Navara had come up with the idea...

...and Navara gave his own account in an interview with Danny King:

Despite the funny story the 2010 Velicka game Navara mentions doesn’t, visually at least, make the same epic impression as the game in Biel:

There's a better example of an exhilarating middlegame king march:

It’s time to return to the mundane world of “normal” chess. 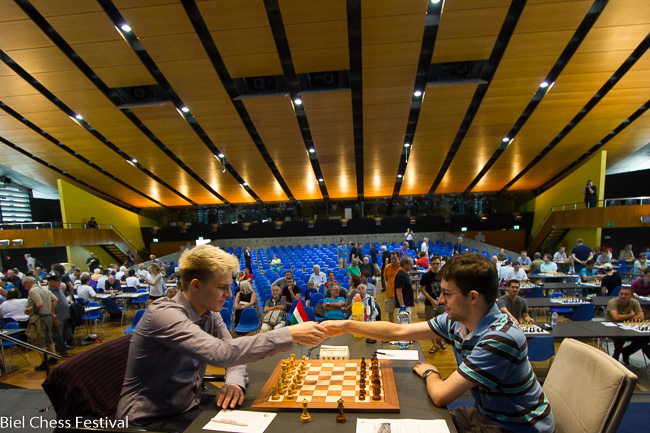 Yes, it’s strange to find Richard Rapport coming under that label, but the Hungarian youngster admitted in his interview with Danny King that he’d had enough of entertaining and then crashing and burning:

Yesterday I just managed to throw away a full point and then a half point… I wasn’t really in the mood to keep up this today.

To be fair to Rapport, he still managed to establish a pawn structure you don’t see every day, after 13.e6+:

But ultimately the game merely ended up in a slightly better rook ending for Black. 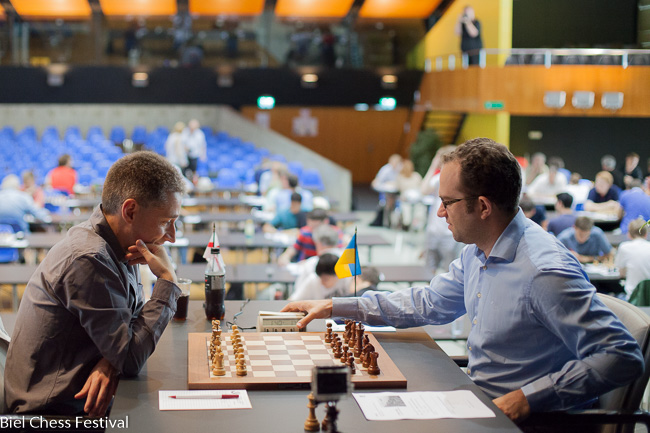 The encounter between Mickey Adams and Pavel Eljanov was nervy, as you might expect from two players who had lost the day before | photo: Biel Chess Festival

The wheels have fallen off Michael Adams’ tournament. After leading for two rounds he’s now sunk to joint last, although for a while it looked as though he was about to win again. Strategically the game revolved around whether Eljanov’s passed but unsupported a-pawn was a strength or a weakness. At first it looked to be the latter, but when it made it to a2 just after the time control White’s rook was tied down while his minor pieces were struggling to survive. Eljanov managed to trap them, and after 45…Bf4! the game was essentially up:

After 46.Nxe8 Rxe8 the pin on the e-file meant Adams couldn’t avoid losing material, though he fought on for another five moves.

Eljanov was asked how he’d managed to focus given what was happening in the Navara game:

It was just incredible, probably one of the most amazing games I ever saw, but ok, my game was also rather interesting and complicated so it was not so hard to concentrate!

So after having three players sharing the lead a round ago we now have space between each of the top three, while the bottom three are tied on 1.5/4:

You can replay all the Round 4 games and see the future pairings and live games below: