England’s Mickey Adams was the confident sole leader for two rounds of the Biel Chess Festival, but in Round 3 he not only lost a game and the lead to Maxime Vachier-Lagrave, but was also overtaken by David Navara and Radek Wojtaszek, who beat Richard Rapport and Pavel Eljanov in very different games. We round up the action from another great day's play. 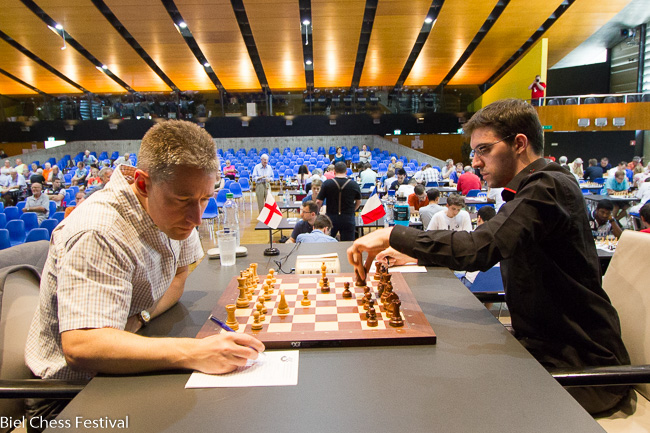 It was a Sicilian, then it wasn't - Adams lost his way in Round 3 against Vachier-Lagrave | photo: Biel Chess Festival

Sometimes it’s just not your day. After a beautiful win in Round 1 and a spectacular draw in Round 2 Mickey Adams was a shadow of his former self against the French no. 1. He was deep in thought early on in a Sicilian which morphed into a Ruy Lopez, and made a bad miscalculation on move 17:

It’s not clear which precise move he missed, but after 17.Nxe5? Qxe5 18. f4 (played almost instantly) he was hit by 18…Bc5+! 19.Be3 Qh5! and White was simply losing a crucial central pawn. For a long time after that it seemed Adams had chances of holding if he kept the position closed, but then he sent his king on a fool’s errand to h4 and blocked off any escape route with the g3-pawn. In the final position the black bishop has made way for the knight to deliver the killer blow from f5:

It doesn’t happen every day, but it happens once in a while. Someone will miss some tactic and then things are really bad suddenly. It happens to everyone, including me lately!

You can find Maxime commenting on the game and much more in Danny King’s video report: 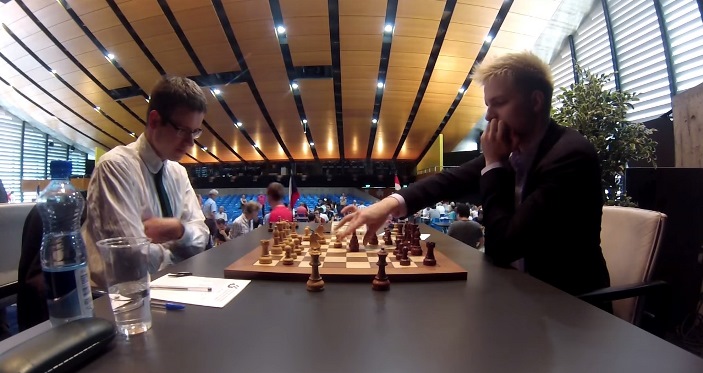 David Navara scored his second win in a row to join Maxime in the lead, but it was anything but smooth. Navara was ready for Richard Rapport to repeat the Chigorin Defence he played in Round 1 and deviated from Wojtaszek’s play on move 3, but it only took Rapport until move 5 to spring a real surprise with 5…e5!?

Normally I play more carefully but Richard surprised me in the opening and then the position became very double-edged and sharp, so I had to calculate a lot... I really like such positions and like to calculate like this but of course it’s tiring and when I’m in poor form I can blunder quite easily. But now I played well. Ok, I achieved a significantly worse position at some moment, but I was lucky to escape this time and then I caught my chance. Richard made a mistake on move 40, which is frustrating.

Rapport underestimated the white passed pawn with 39…Rxg3? which ran into 40.Ne4!

Unfortunately for Rapport he still had one move to make before the time control, so he couldn’t calculate the tricky draw with 40…Bxe4! 41.Rxd6 Rf3 42.Rxe6 Rxf7 43.Rxe4 a2 44.Bd4 Rh7 45.Rf4 Re7+ and the passed a2-pawn is just enough of a threat to hold. Instead after 40…Rg2? Rapport was unable to prevent the white passed pawn from deciding the game. 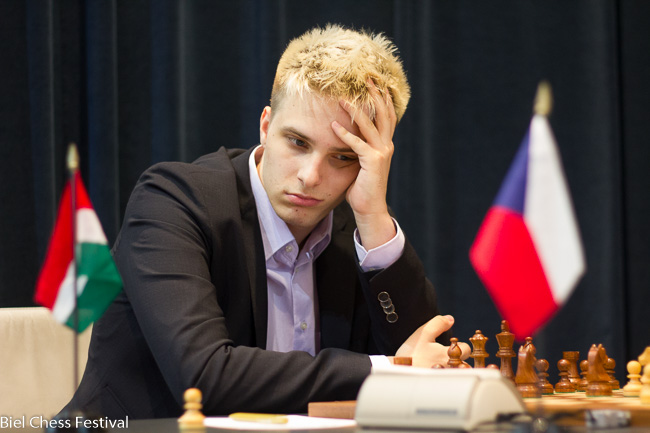 A tough day at the office for Richard Rapport, though you couldn't blame the opening | photo: Biel Chess Festival

So Navara had some luck, but as he pointed out:

Ok, you also need to deserve the luck. If I had missed the 40th move Ne4 I would not have won the game, so I need to be ready to exploit my opponent’s mistakes. 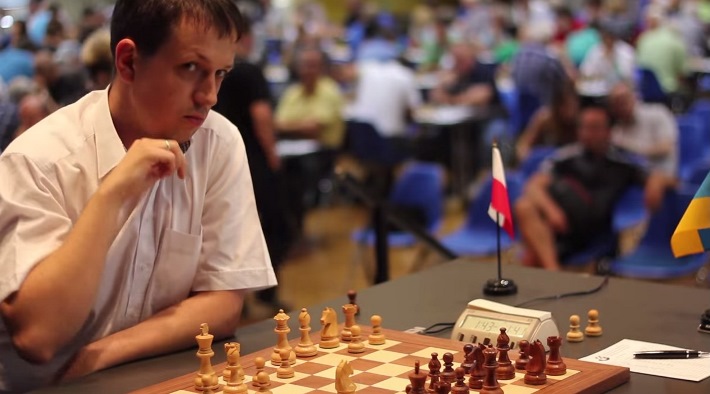 The final win of the day was a beautiful positional victory by Radek Wojtaszek. His opponent, Pavel Eljanov, followed a blitz game that had gone well for him in Dubai last year, but Radek improved  White’s play on move 19 and then got to use some of the fruits of his labour for Vishy Anand with the move 20.Nce4!

22…Ne8 is a quite human move. Objectively the strongest is probably 22…Be7 23.Nf5 g6 and this should be a draw, but it looks not so easy to play, especially if you don’t have an engine running!

Soon in the game the black pieces made a truly miserable impression, clumped together on the back two ranks:

Here 28…Nf6?! was the wrong way to try and untangle, and after 29.Nxf6 Bxf6 30.Rc7 Wojtaszek was well on top. He finished things off with the kind of precision that Vishy himself would have been proud of.

So after three rounds we suddenly have three completely different leaders! 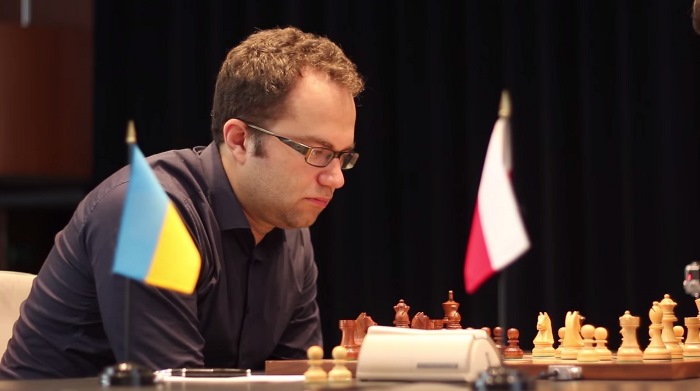 It's been a tough event so far for Ukraine's Pavel Eljanov | photo: Biel Chess Festival

You can replay all the Round 3 games and see the future pairings and live games below: