It was a great day of chess in Biel. All three games included noteworthy highlights and two of them finished with decisive results. Magnus Carlsen got his second win in Switzerland after showing great technique in a double rook endgame against Maxime Vachier-Lagrave; Peter Svidler defeated Nico Georgiadis with precise play in a position with two vulnerable kings; and David Navara missed a couple of chances to get a quick win in a sharp opening against Shakhriyar Mamedyarov. 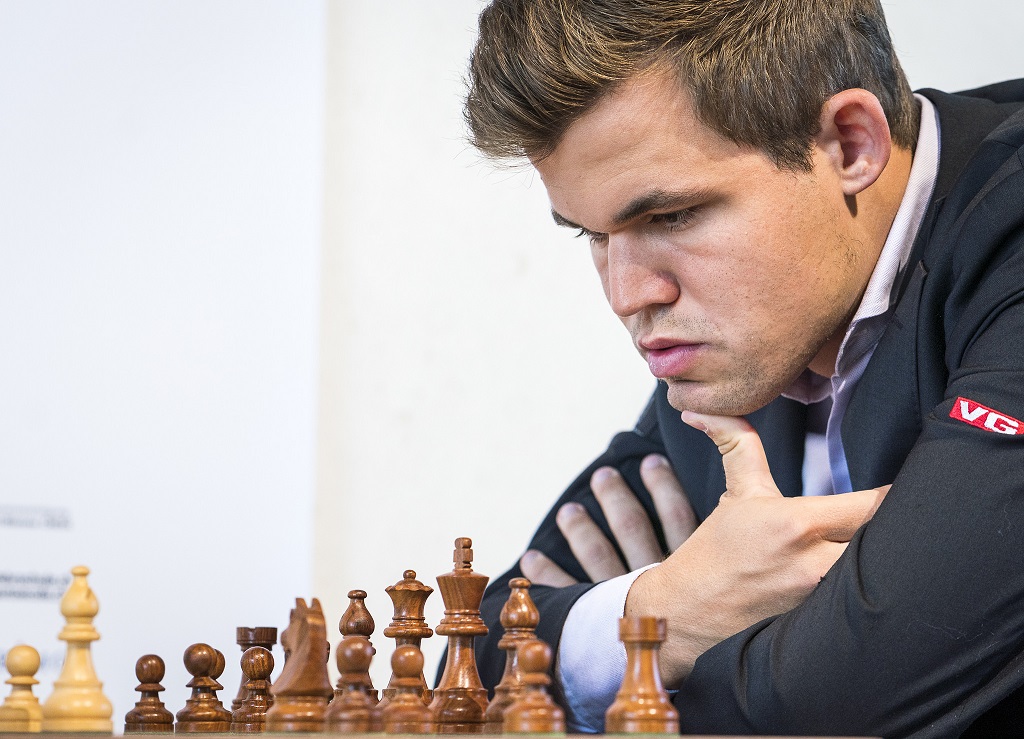 These two players arrived after almost perfectly opposite first round encounters. Navara lost a long game after getting an edge against Carlsen, while Mamedyarov defeated Georgiadis in remarkable fashion. The Czech player had the white pieces, and it was hard to predict how his first round loss would affect his play — David is known for his nervousness.

Both players — Mamedyarov especially — made their first 16 moves rather quickly, but at this point they started carefully considering how to continue. If we take a look at what followed, this can't surprise anybody, as a sharp battle ensued. White made his first priority keeping the initiative and pushed Black to leave his king in the centre. On move 22, Navara gave a check with his queen and Mamedyarov decided to use his g-pawn as a shield:

Here, the computer dictates that 23.Nf5+ gives White a large advantage, since after 23...Ke8 24.Qh6 Qxe5 25.g4 the black king is stuck in the centre with a deficient pawn structure to cover the weaknesses that surround its position. Navara chose 23.Qb4+ instead, and an exchange of queens followed shortly afterwards. White created connected passed pawns on the kingside, but Black also had a dangerous passer on the c-file. Good defensive moves from both sides led to a 44-move draw. 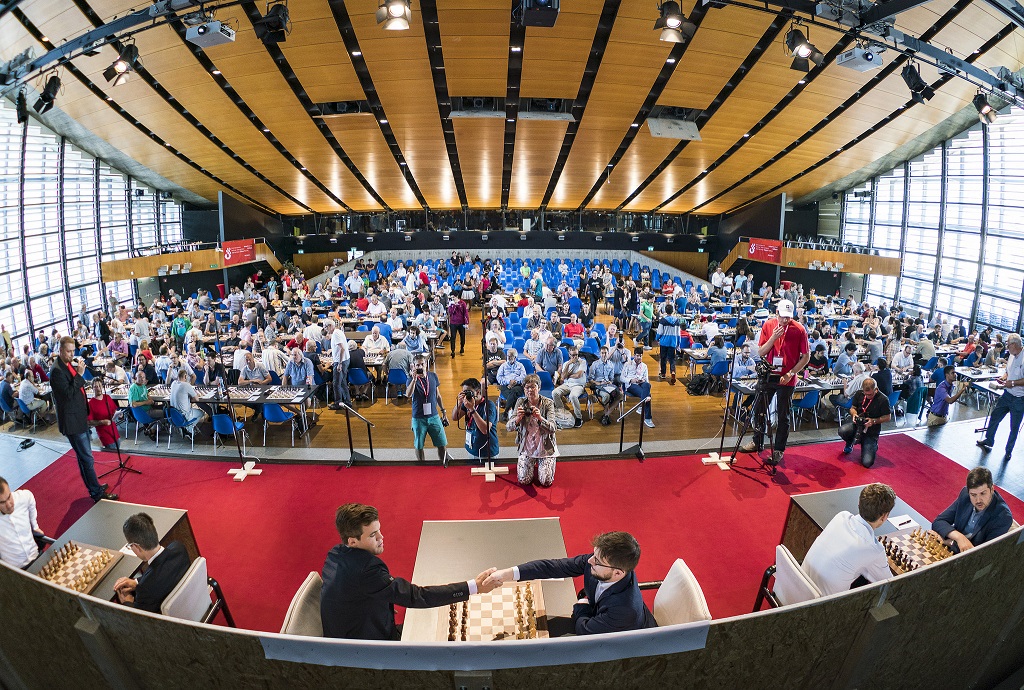 We mentioned in our first round report that the lowest-rated player of the tournament, Nico Georgiadis, had the misfortune of starting with two Blacks against Mamedyarov and Svidler. The Swiss GM lost both games and now will need to recover psychologically before facing what's left of a very tough tournament. He will certainly welcome the challenge, we're sure.

In the game, Peter Svidler chose the 3.Bb5+ line of the Sicilian and started spending time on the clock early in the game. A manoeuvring battle followed, and Georgiadis thought for 39 minutes before busting the position open with 15...d5:

Black could have chosen to play a quieter move like 15...h6, keeping the tension. Nico's move led to a complex struggle where it was necessary to calculate sharp tactical shots at every turn. A key feature of the position was established on move 18:

Black has just unleashed a discovered attack against the queen on the long diagonal, but White has a resource that will leave Black's king in a vulnerable position for the rest of the game: 18.Bxf7+. There followed 18...Kxf7 19.Qf5+ Kg8 20.Bxc3, and now White’s king looks safer than Black’s.

After some exchanges, they reached the following position:

Here Svidler uncorked 39.Nxh6+! and Black can't take the knight without allowing White's queen and rook to get a decisive attack. Georgiadis continued with 39...Kh7, but the queen and knight duo now had more space to harass the king.

It's a well-known fact that Svidler thrives in this type of open position (the kind that frequently occur in his beloved Grünfeld), and the current Russian champion proved it to be true once again. He sealed the deal with a thematic move from the game:

56.Nh6+ provoked Nico's resignation. The winning lines in this case are easier than the ones seen after the same shot on move 39. 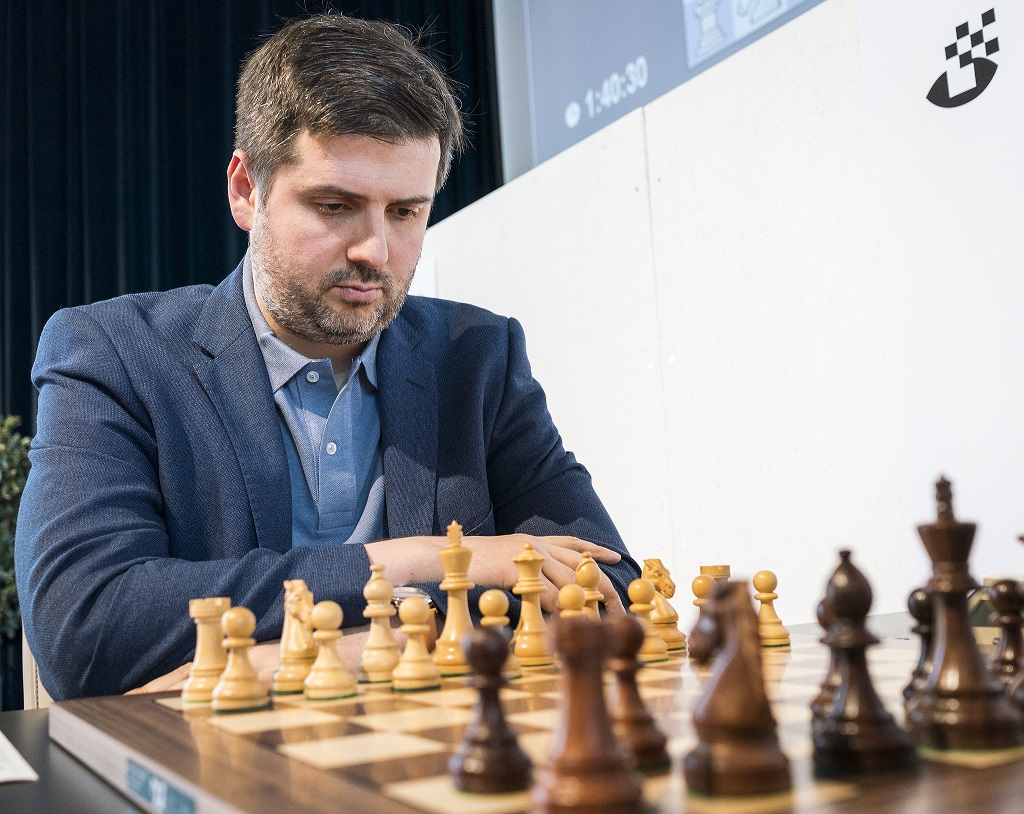 Svidler is half a point behind Magnus, and still has a positive score against the world champion | photo: Lennart Ootes, official website

As Tarjei J. Svensen mentioned on his Twitter account, Carlsen hadn't beaten MVL in a classical game since 2015, which probably explains why Magnus met 1.e4 with 1...d6. On Sunday, Anish Giri had obtained a great position against Duda's Pirc and, as expected, the Dutch grandmaster took his chance to publish an amusing tweet:

The unusual opening resulted in both players taking long thinks as early as move 6, but the dynamic balance was maintained all throughout the opening and the middlegame. This phase of the game included some curious moves:

Vachier-Lagrave activated his king with 22.Kd2, despite the fact that the board is filled with pieces. By move 31, the players arrived in a sharp endgame with two rooks and five pawns per side.

From here on, Magnus showed why he is regarded as a super-strong endgame player, often compared with Anatoly Karpov. Both players walked a tightrope, as the mate threats are abundant in a position with four rooks on the board, but Black converted his advantage with surgical precision until going into a single-rook endgame with an extra pawn. MVL resigned on move 79:

Grandmaster Niclas Huschenbeth takes an in-depth look at the game: 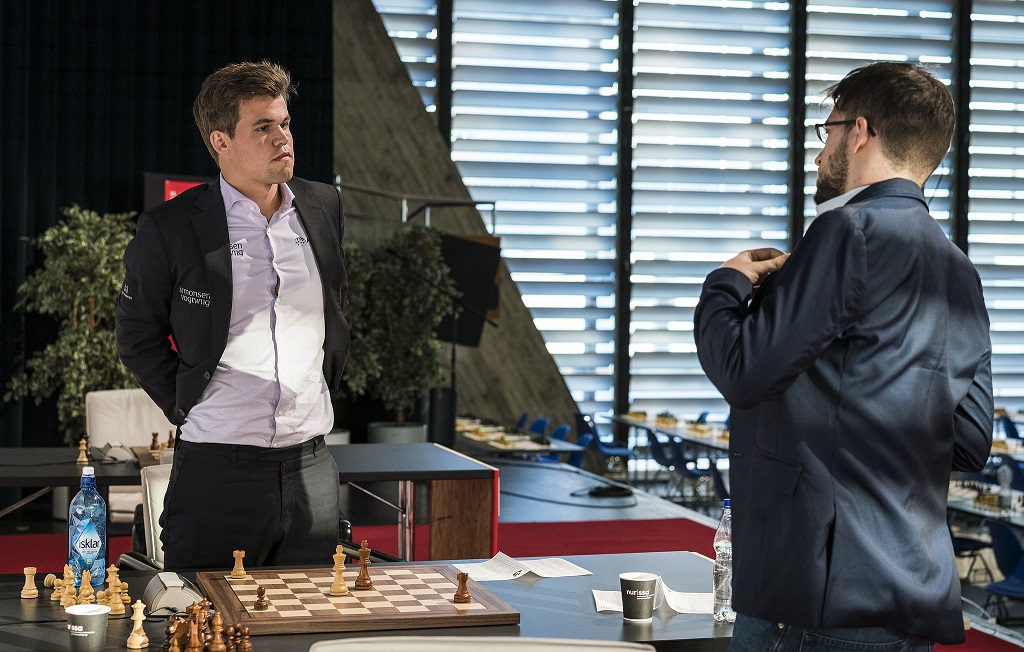 The standings in Biel have the clear favourite at the top and the underdog in the cellar:

Will Magnus keep up his winning streak? Will Mamedyarov or Svidler catch up with the Norwegian? Don't miss the action from Biel live here on chess24!