Two very different wins left Shakhriyar Mamedyarov and Magnus Carlsen as co-leaders of the 2018 Accentus Biel GM Tournament after the first round. Shak needed only 28 moves to wipe Nico Georgiadis off the board, while Magnus had to work hard to win after David Navara misplayed his position. Maxime Vachier-Lagrave and Peter Svidler drew. 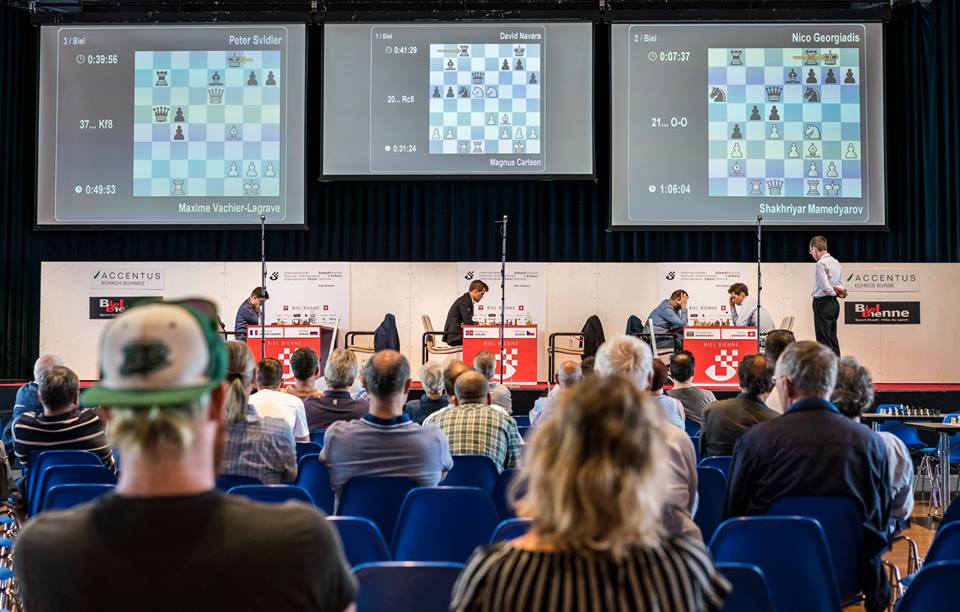 A big stage is great if you want to have a live audience | photo: Lennart Ootes, official website

The Biel Chess Festival organizers decided to give 22-year-old Nico Georgiadis the chance to play with some of the strongest players in the world, and the drawing of lots resulted in the Swiss grandmaster having to face Mamedyarov and Svidler with Black in the first two rounds. In the first game, he had a sort of "baptism of fire", as he was quickly surprised in the opening and couldn't ward off a devastating attack.

Mamedyarov had a novelty prepared on move 8:

According to chess24's database, the highest-rated player that arrived in this position was Viesturs Meijers (2493), and none of those who got here continued with 8.Rc1. Shak declared that he expected this position, and that he had prepared it thoroughly. It clearly worked, as Georgiadis spent no less than 15 minutes before going for 9...Bg4. After the game, Shak confessed that he already felt he was better at this point.


Things got out of hand quickly for Black, as White already gobbled up a pawn on move 22: 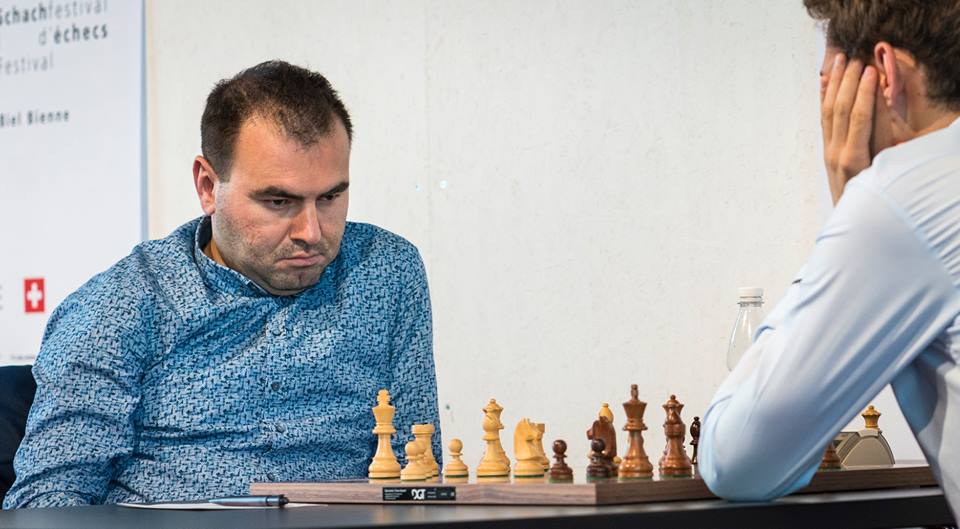 A great win for Mamedyarov, who is still above the 2800 rating barrier | photo: Lennart Ootes, official website

A quick first round win seems to be a good omen for Mamedyarov, who had solid performances in the two classical events he played after the Candidates (50% in Shamkir and -1 in Norway). Curiously, when asked about his rise in 2017, he said that his motivation was the Candidates Tournament, as having a clear goal helped him focus his energy on chess. Now, on the other hand, he will try to play more freely, without thinking too much about his rating.

The last time these two players faced each other was in this year's Gashimov Memorial, when Navara even obtained a slight pull with Black at some point. This time around, they went into a tense middlegame position, which eventually invited Magnus to exchange his queen for Navara's rook and bishop:

The game continued with 16.Nxb4 Rxd1 17.Rfxd1. A phase of manoeuvring followed and the players arrived in an endgame where Black had a queen and three pawns against White's rook, knight and four pawns. At this point, it seemed as though Carlsen had to be careful to avoid getting bamboozled by the queen's movements, but soon Navara lost the thread when he pushed his kingside pawns much too quickly:

Black should have come up with a careful plan to advance on the kingside if he wanted to go for the win. Here, White followed with the obvious 46.Nf6+, getting the h-pawn. From this moment on, it was clear that White was the one who was going to push during the rest of the game.

Carlsen did not have many problems finding the correct scheme to advance his e-pawn, until he was able to deliver the coup de grâce on move 59:

After 59.Rf5+, Black is forced to give up the queen for the two pieces, and White has a winning pawn endgame. Five moves later, Navara resigned. 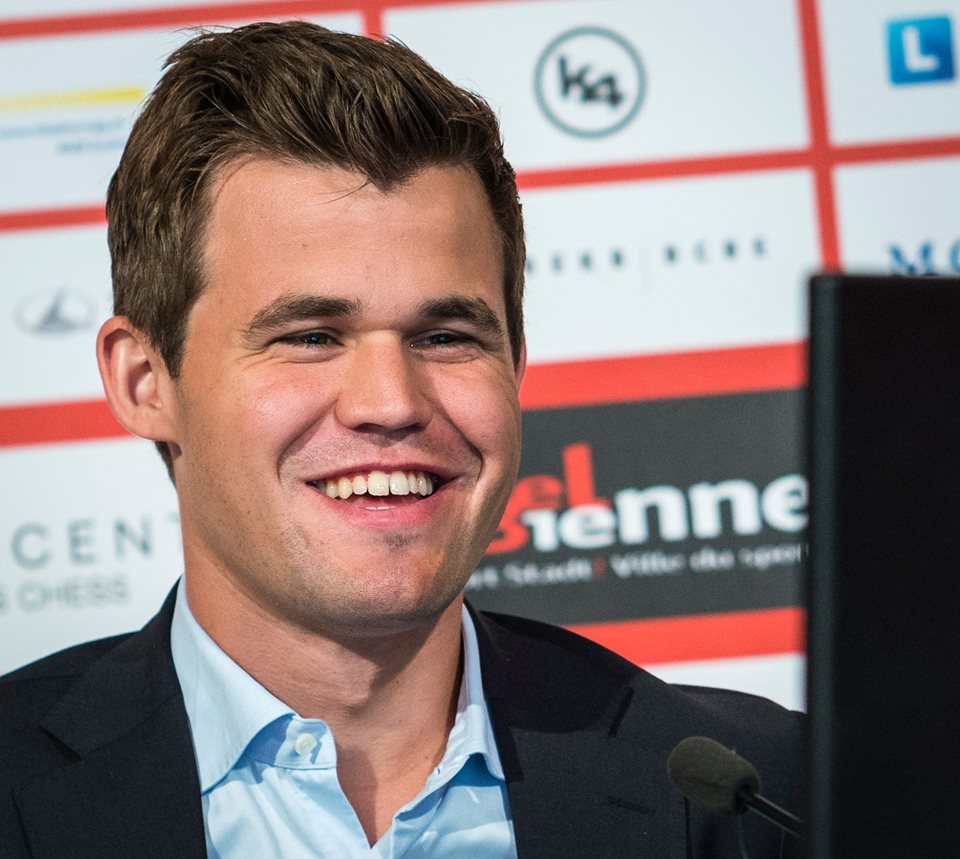 In the post-game press conference, the World Champion admitted that he only won because his opponent failed to evaluate his position accurately:

Two years ago, the Biel Chess Festival did not have a round robin tournament but a match that faced these two players off against each other. The French number 1 won that event by a clear 5.5:2.5 after defeating Svidler in both the rapid and classical sections.

The players repeated a line they had explored last year in Saint Louis, where Vachier-Lagrave had obtained a big advantage but was not able to convert. As so often happens, Svidler was great at exposing what went on in their game at the press conference:

The previous time I tried this I had a losing position by move 20, so I thought I should try to prevent the same thing happening again.

He couldn't fully explain why he had gone for the same inferior line:

From my viewpoint, I'm a lot happier about what I did today than what I did in Saint Louis when we played this line for the first time, but I'm still not entirely sure why I'm subjecting myself to this all the time.

Peter found tactical defensive moves that pushed Vachier-Lagrave to accept simplifications and sign a draw after 39 moves. When asked if he felt that his good record against Svidler might have helped him, MVL replied:

He has a plus score against Magnus, he shouldn't be afraid of anyone. 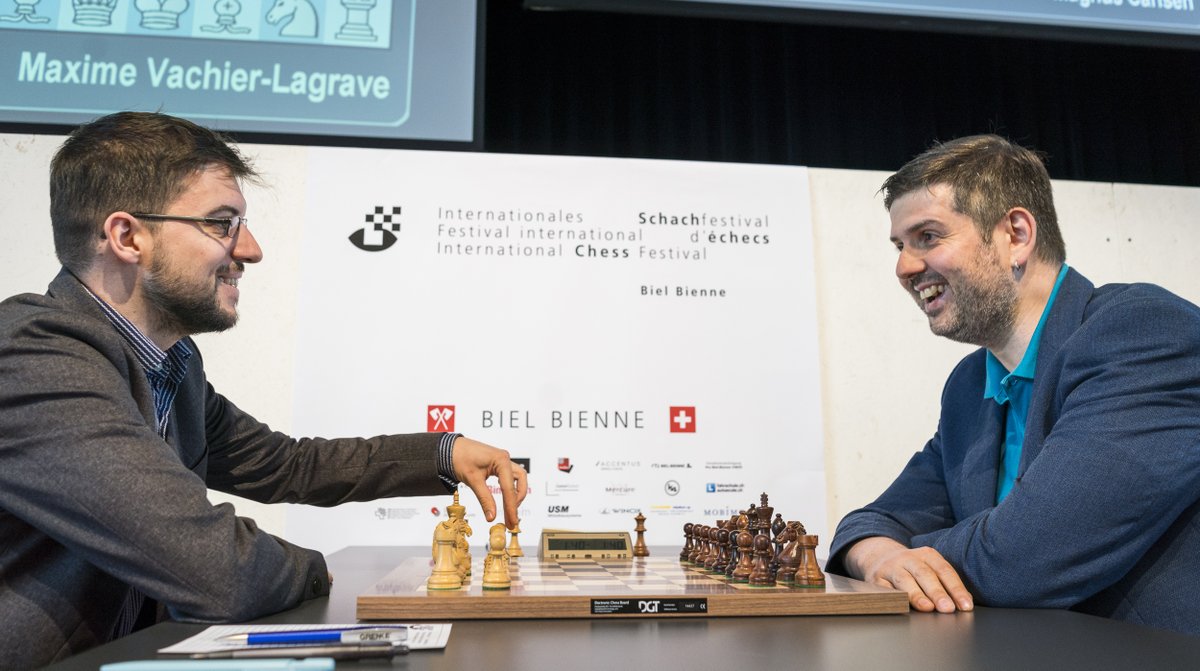 The Biel GM Tournament is a double round robin, so we will have ten days of action (Saturday will be the only rest day), all starting at 14:00 CEST. Don't miss the action live here on chess24!