Ding Liren, Levon Aronian, Wesley So and Alexander Grischuk will be among the players battling for the final two spots in the FIDE Candidates Tournament when the 2022 FIDE Grand Prix begins next Friday, February 4th in Berlin. The new format sees 16 players start in four separate groups, where only the winner will qualify to a knockout. That means, for instance, that for Grischuk to qualify he first has to overcome Hikaru Nakamura, Dmitry Andreikin and Etienne Bacrot. We’ll have full coverage here on chess24. 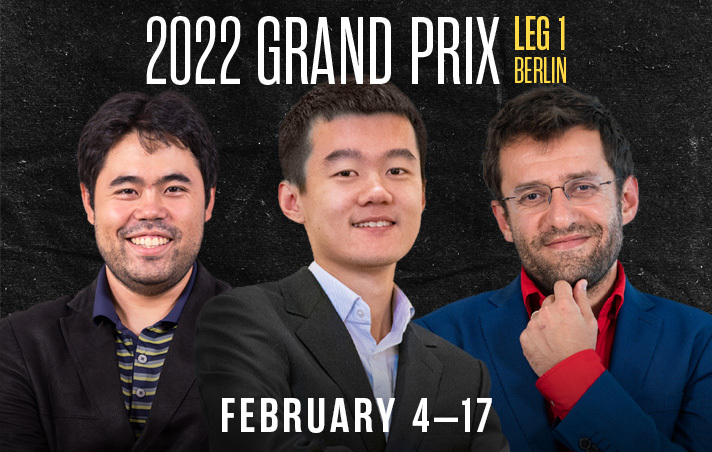 Tata Steel Chess has entered its final weekend, the Meltwater Champions Chess Tour kicks off on February 19th, but the 2022 Chess Calendar simply has no gaps! Sandwiched between the two events is the first leg of the 2022 FIDE Grand Prix, from February 4-17 in Berlin. Here’s all you need to know.

The 2022 FIDE Grand Prix will decide the final two players in the FIDE Candidates Tournament in Madrid this June that determines Magnus Carlsen’s next World Championship challenger — or if Magnus doesn’t play then the top two in the Candidates will play the match for the highest title in chess. 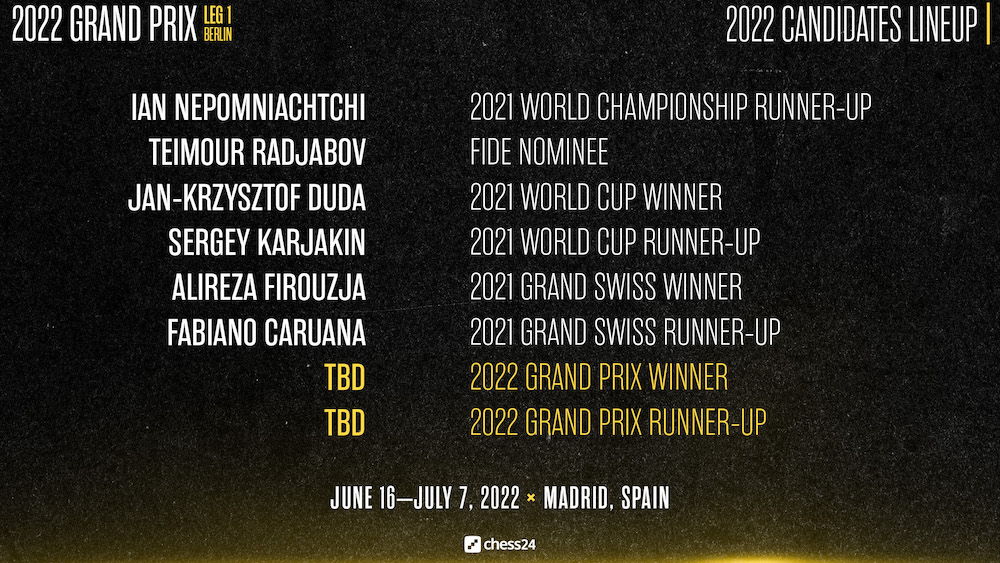 There are 24 players in the 2022 FIDE Grand Prix, including all the Top 10 players not yet qualified for the Candidates, with 16 players competing in the first leg, the Berlin FIDE Grand Prix. The players not playing, and therefore playing both of the remaining events, are greyed out. 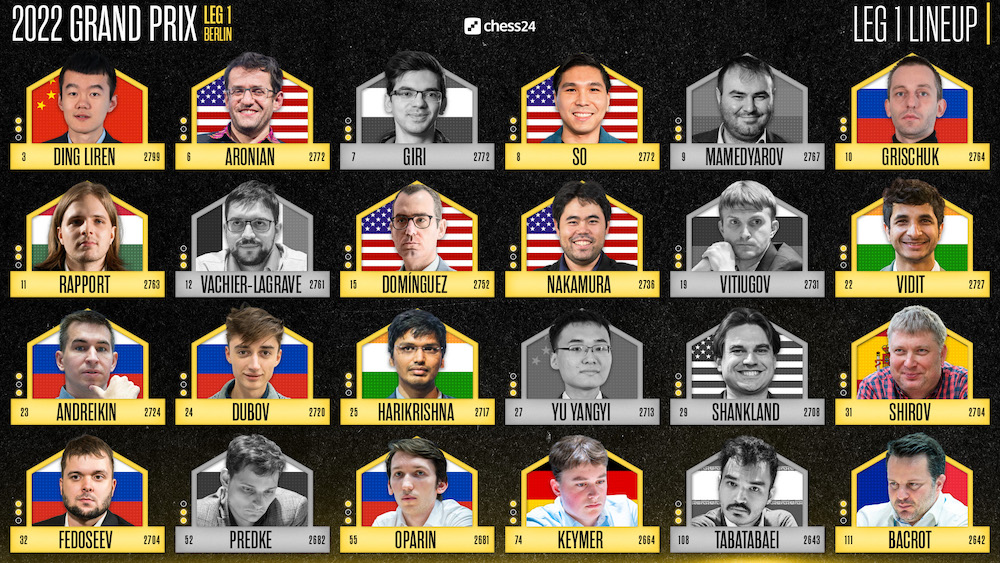 They made it to the Grand Prix series from the FIDE World Cup, the FIDE Grand Swiss, the rating list, or, in the case of Hikaru Nakamura and Daniil Dubov, via wild cards. Harikrishna has taken the place originally given to Wei Yi, after the Chinese star had visa issues. 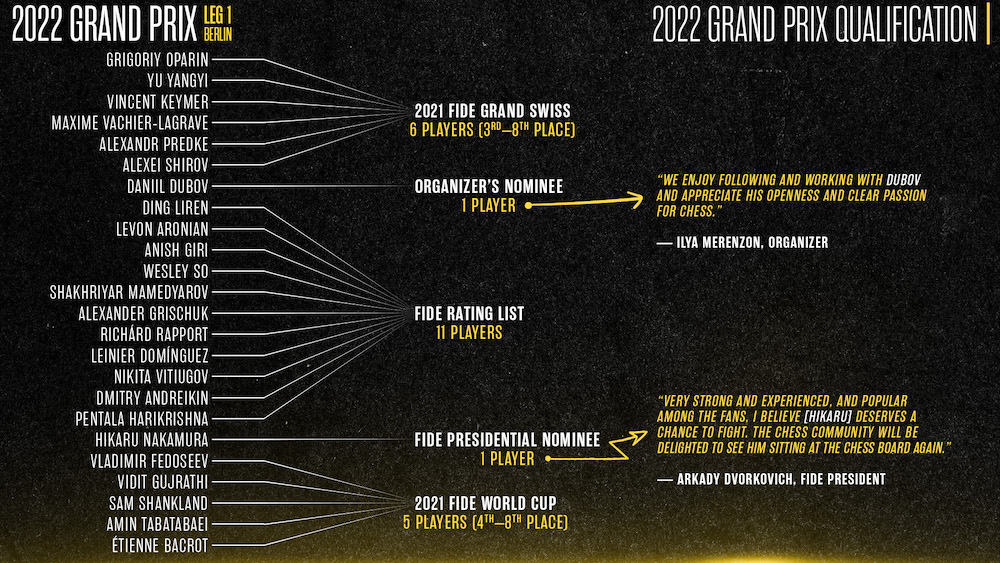 We already know who’s playing in Leg 2 in Belgrade... 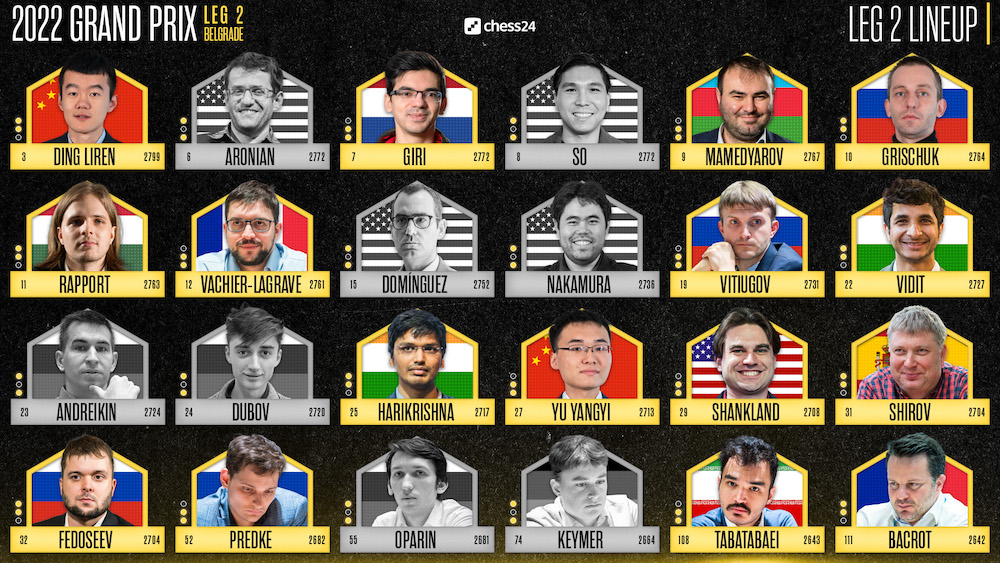 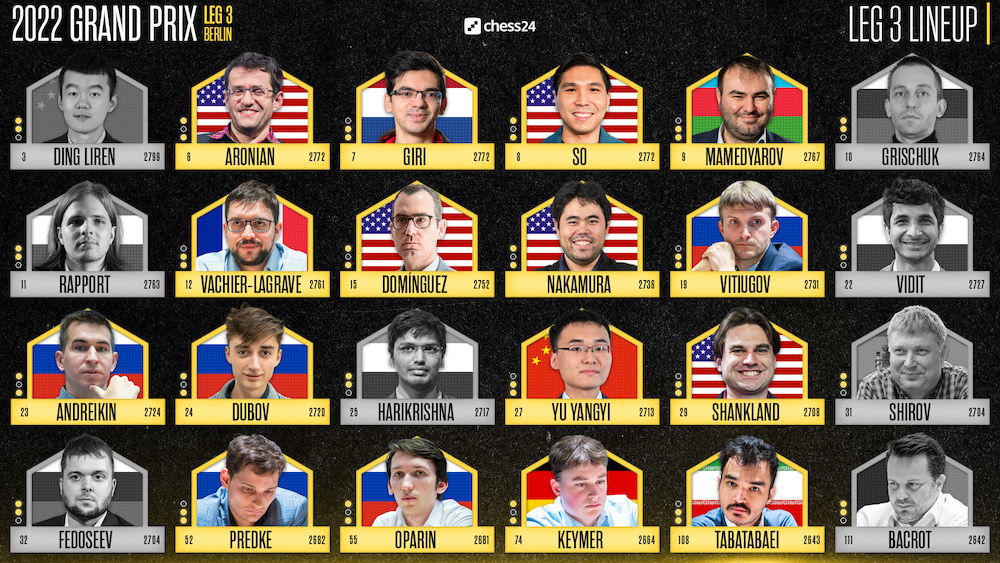 What’s the schedule for the 2022 FIDE Grand Prix?

The Berlin FIDE Grand Prix kicks off at 15:00 CET (09:00 ET, 19:30 IST) on Friday, February 4th and, if tiebreaks are needed in the final, will end on Thursday, February 17th. There are two more legs to come in Belgrade and then again Berlin, before the series ends in early April. 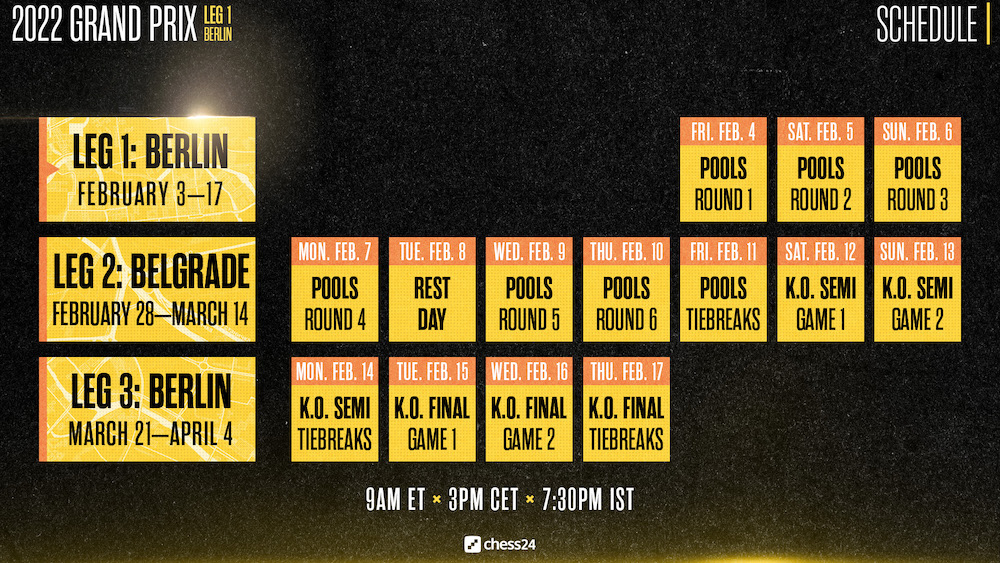 Each of the 24 players in the 2022 FIDE Grand Prix plays in two of the three legs, with 16 players in each tournament.

The 16 are split into four groups of four, with the players in each group playing each other twice at classical chess. Only the winner of each group goes forward to a knockout with the other group winners.

The knockout semi-finals and final are two-game mini-matches. Points are then allocated based on where players finish, with a maximum of 13 points on offer for each event. 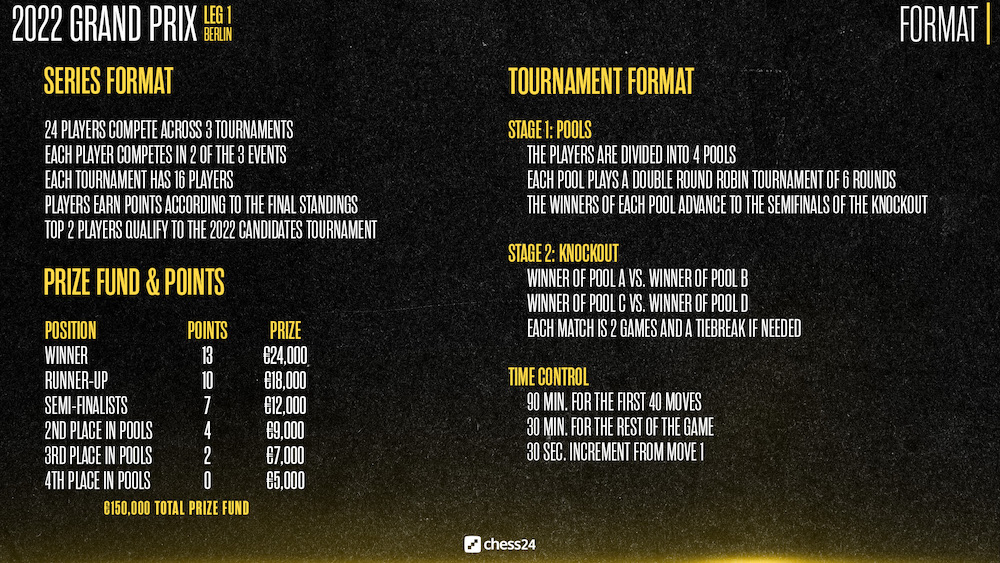 If a knockout match is level after two games, two 15+10 rapid games are played, followed, if needed, by two 3+2 games, and finally Armageddon, where White has 5 minutes to Black’s 4, but a draw counts as a win for Black.

The tiebreak system is similar if two or more players tie for first place in the group stages. 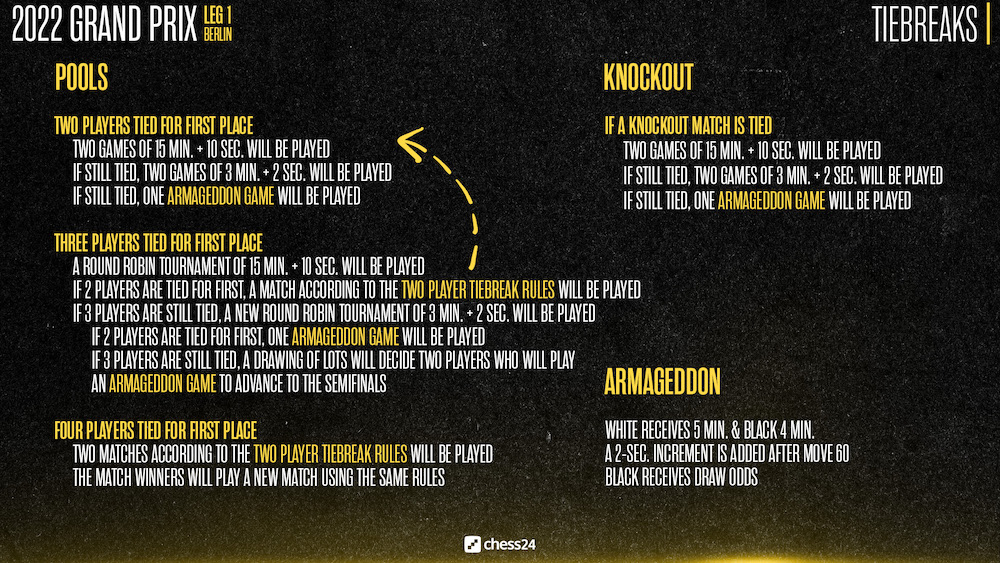 What are the groups for the Berlin Grand Prix?

You can best get an idea of how tough the Grand Prix system is going to be from the four groups, or pools, that will feature in the first leg in Berlin. 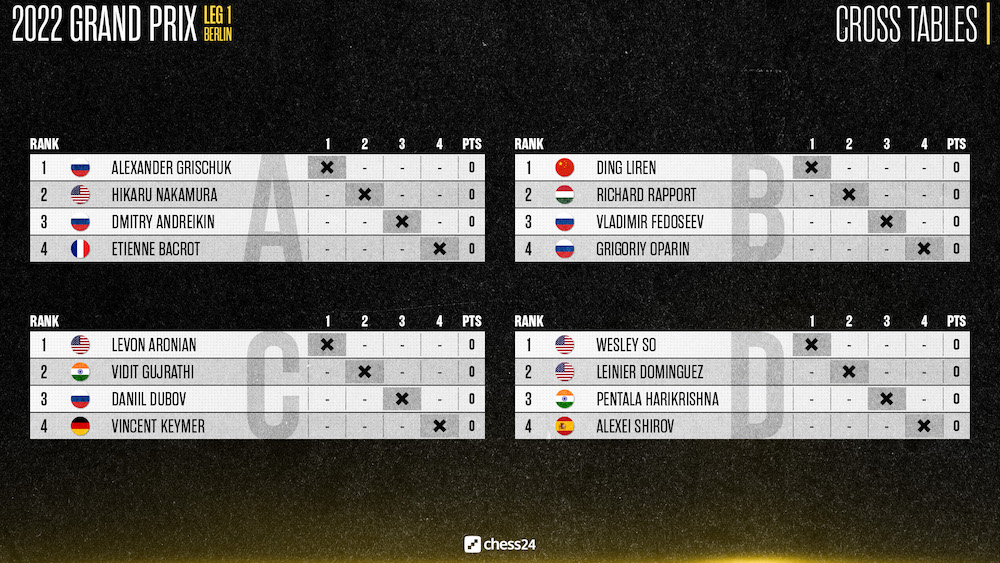 Just one player can win each group and advance to the semi-finals, which, if the top seed won each group, would feature Alexander Grischuk (A) vs. Ding Liren (B) and Levon Aronian (C) vs. Wesley So (D).

It’s usual in football to try and identify a “Group of Death”, but here that’s difficult. Pools B and D have the highest average rating, while Ding Liren and Richard Rapport are the two highest rated players competing for a single semi-final spot, but after Alexei Shirov’s recent rise the D group is the only one with only 2700 players.

Alexander Grischuk and Hikaru Nakamura have been huge rivals ever since they competed in fiery blitz back at the dawn of online chess, while Dmitry Andreikin has played little of late but is usually a rock solid opponent.

The C group perhaps features the most entertaining line-up of players, with Levon Aronian a clear favourite but Daniil Dubov and Vidit both capable of landing punches. The same goes for 17-year-old Vincent Keymer, the great local hope and a player who qualified on merit from the Grand Swiss, while also finishing as runner-up in the most recent European Championship. 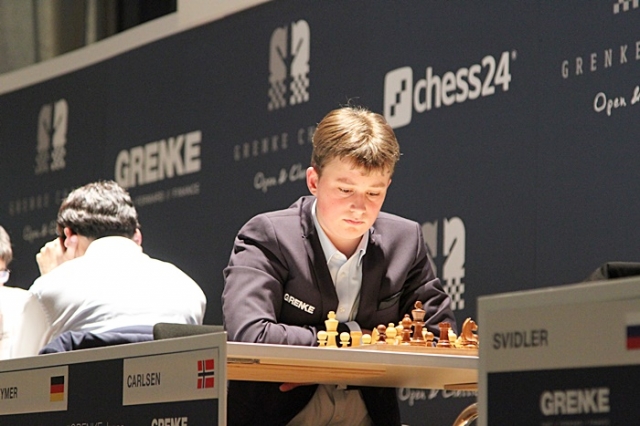 Daniil’s participation is now in doubt, after he tested positive in Wijk aan Zee and has been forced to pull out of the Tata Steel Chess Masters.

We’ll have all the action live here on chess24 from 15:00 CET on February 4th, with more details to follow! 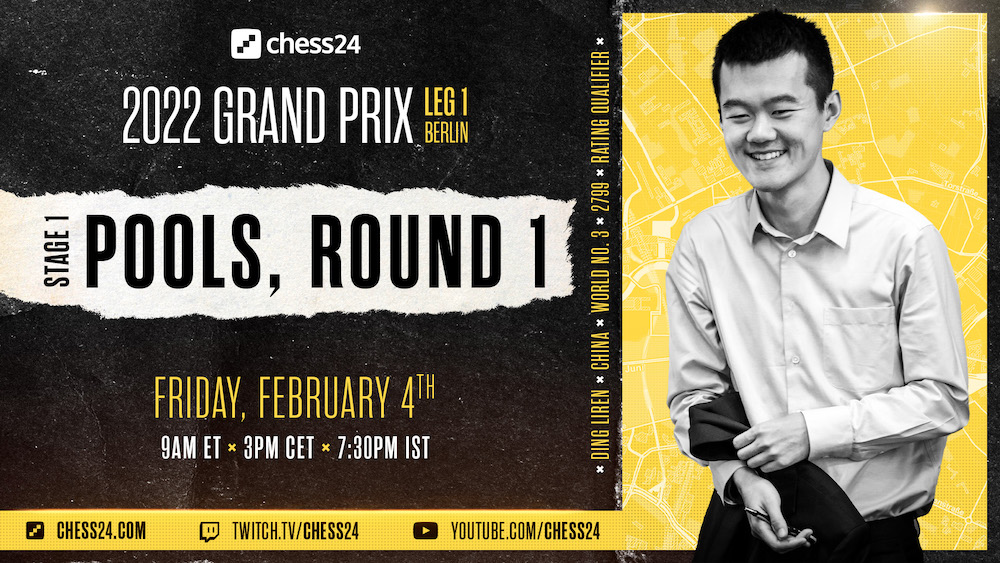