Battle of the non-Candidates

“Win a tournament for the first time in your life, and maybe people will start taking you seriously”. That was World Champion Magnus Carlsen responding to Anish Giri as some Twitter banter suddenly got out of hand. The spark came from Maxime Vachier-Lagrave’s preview of the Candidates Tournament, where he surprised Carlsen by described Vladimir Kramnik as the player, “who best understands chess”. The other Top 10 player not involved in the Candidates, Hikaru Nakamura, also joined in to attack Giri’s “ridiculous tweets”.

The battle between Carlsen and Giri is not only on the chessboard | photo: Alina l'Ami, Tata Steel Chess Facebook

In Anish Giri’s recent Russian interview with Evgeny Surov for Chess-News.ru he commented on his use of social media:

Twitter doesn’t take up much of my time at all. I use it as a chance above all to communicate with people who support me, to let them know about my plans, my opinions and also to relax, to release some tension and get some enjoyment – to joke with someone, get a joke back and improve my mood.

The big news in that interview, though, as we reported in our Candidates Preview, was that Anish is helping Vladimir Kramnik in Berlin. It was the World Champion who began the Twitter hostilities:

All it then needed was another spark, and that came from Maxime Vachier-Lagrave’s Candidates Preview on his website, a highly-recommended read. The French no. 1 pulls no punches as he looks at the candidates in turn and talks about his own record against them. For instance, of Wesley So:

He is a typical counterattacking player, that’s where he feels at ease. If he doesn’t succeed in finding more aggressive ideas in the opening, in setting more problems to his opponents, it will not work in Berlin.

He tips Levon Aronian and Fabiano Caruana for success, considering Vladimir Kramnik an outsider, since:

He takes much more risks, so he is subject to tiredness, especially as he’s now 42, with a weakened body. Thus, a 14-round tournament may prove a bit too long for him.

On the other hand, Maxime gave some high praise:

In my opinion, Vlad is probably the player in the world who best understands chess. You can show him whatever position, his instincts will seldom let him down. He will always find what the evaluation of the position is and which plan to adopt.

That’s an evaluation more often applied to another player, and the current World Champion couldn’t resist another foray onto Twitter when we tweeted that quote:

And that’s where things got “serious”, as Giri managed to push the World Champion over the edge:

It was time to rub in Giri’s failure to win the Tata Steel Masters playoff...

As Giri also said in the interview, though, since the mockery he received for his 14 draws in 14 games in the 2016 Candidates Tournament he’s developed a very thick skin. Unsurprisingly, he got in the last word. Both to Magnus…

And to Nakamura, who had decided to join the fun, though in this case it wasn’t quite a word…

Let’s hope all four of our super-GM tweeters will be active during the Candidates Tournament, which of course starts tomorrow. Follow all the chess action live here on chess24, and you can also follow us on Twitter so you won't miss the off-board action either! 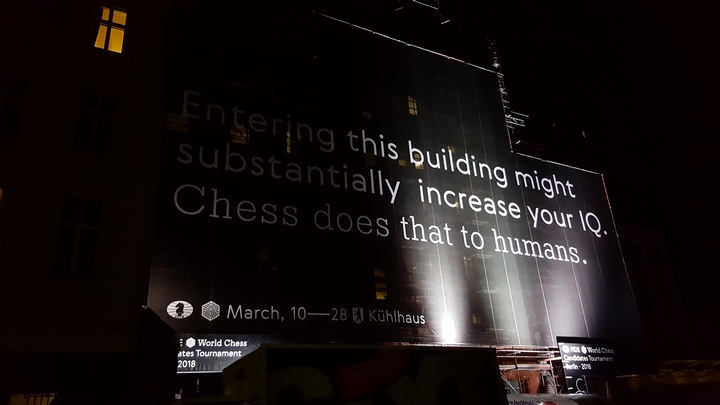 The greater the lie the greater the chance that it will be believed? This is how the outside of the Berlin Kühlhaus venue for the Candidates now looks | photo: Evgeny Surov, Chess-News.ru