In two long matches in the chess24 Banter Series Nihal Sarin and Sam Shankland earned the chance to advance into the finals. We saw beautiful tactics, missed chances and finally two deserved victories. Let’s look back at the Day 2 action. 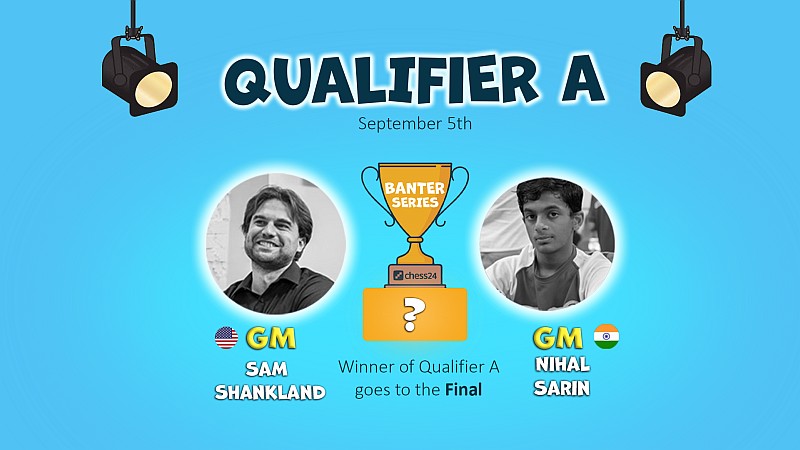 The match started peacefully with a draw, although Pichot could have won with the black pieces. After 41.Rxh7 he had the chance to win an important pawn:

In the second game, a Najdorf, Shankland managed to go with two connected passed pawns into the endgame — and to convert the advantage. 1½:½

Pichot took revenge also with a Sicilian in the third game, a Sveshnikov, that after the usual carnage in the middlegame went into an endgame in which Pichot had two connected passed pawns. Again a victory for Black. 1½:1½

Would this be a good day for the Sicilian? Shankland at least seemed to think so, because he went for the Najdorf again, but couldn't put enough pressure on Pichot and finally blundered in an equal position: 34…Bf1??

In the fifth game they repeated the opening of the first one, a Ragozin Defense, Alekhine variation, but Pichot was never better, even blundered a rook at the end, and had to resign. 2½:2½

Shankland tried to play the Najdorf again in the sixth game, but Pichot prevented that with 4.Qxd4, the Chekhover Variation. He had a chance after 14…e6?

The seventh game, a Queen's Gambit Declined, Vienna Variation, was equal for a long time, until Shankland blundered material in the endgame and resigned. 3½:3½

Now they had to play two more blitz games. In case of a tie they would have played an Armageddon game, but it didn't come to that. Shankland won the ninth game, an Open Catalan, without giving his opponent any counterplay. 5:4

Now Pichot had to win. He went for the Scotch Opening, played aggressively with an early h4, but never managed to get an advantage. In the end he blundered a bishop. 6:4 and end of the match.

Donchenko had a very good position in the first game when Sarin played 26…Rde8?!:

In the second game Donchenko had a small chance after 31.Qc4?:

In the third game Donchenko finally won, but Sarin missed an opportunity after 41.Be4:

But in the next game, Sarin showed some nice calculation when he gave his queen after 17…Bf6?:

18.dxc6! In the following exchanges he got excellent compensation for the queen: 18…Rxe2 19.Bxe2 Qc7 20.cxb7 Qxb7 21.Bxf6 gxf6. The white pieces coordinate much better, and Nihal patiently worked his way towards victory. 3:1

He won the next game convincingly, and now Donchenko had to win to stay in the match. He managed to do that in the sixth game, but the seventh ended in a draw, and with that Sarin had won the match.

The winners will fight to get into the Banter Series Finals on September 5. Before that the action switches to the B Qualifier.