It took two rapid and two tense ten minute games, but when the clocks were stopped it was Sergey Karjakin and Peter Svidler who were all smiles. Both won with Black in the final game to clinch a spot in Sunday's semifinal round. The audience in the gallery swelled with local fans who turned out to support the last Azerbaijani standing, Shakhriyar Mamedyarov, but it was not his day as he dropped both of the ten minute games versus Karjakin.

It seems like every round we've asked "how far can Wei Yi go?" Well, today we finally got the answer, as the experience of former World Cup winner Svidler ultimately won out over youth. There will be no Chinese player in the Candidates, but at least one Russian looks increasingly likely. 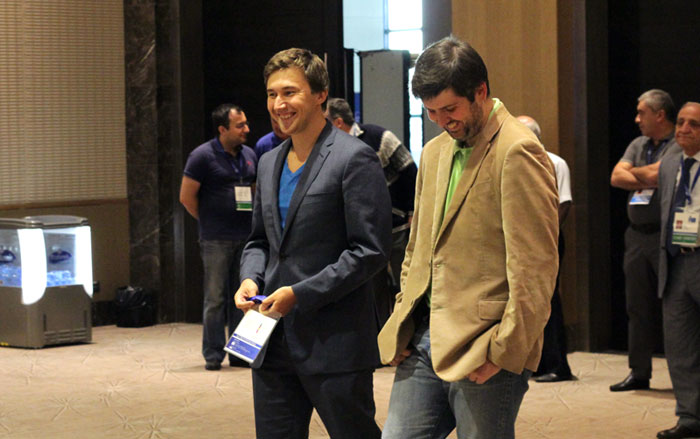 Despite the evident tension of the day, these smiles came before the start of the tiebreak | photo: Macauley Peterson

Karjakin had a bit of a scare in the second round, when an upset at the hands of Alexander Onischuk forced him to a tiebreak in which he needed to win the 10 minute games to advance. Since then, he has been undefeated but not invulnerable. Heading into today, the pressure was on, even if it didn't show on Karjakin's face.

I was really worried, but somehow I made a poker face and I kept playing...it was a very difficult match and it was impossible to play without mistakes.

Karjakin was the 2012 World Rapid Champion, but Mamedyarov took that same honor in 2013, and for both players the World Cup is their last chance to make it to the coveted World Championship Candidates tournament next March.

The first game of the match saw the players whizzing through their opening moves in a Berlin ending, following a game of one of Karjakin's seconds, Alexander Motylev, up until 16...Nd5. Mamedyarov continued to play quickly until 20...g5!?

Mamedyarov spent close to 7 minutes on this pawn sacrifice

Here taking on g5 or on g6 en passant are both possible. Karjakin opted for the former and after the forcing sequence 21.Nxg5 Bh6 22.Rf2 Rg8 23.Rh2 Bxg5 24.Bxg5, the bishop is taboo due to the check and skewer on h8, but the nice intermezzo 24...Bxf5 wins back Black's pawn.

Next Black will recapture the bishop with check

White had a small advantage in the resulting rook ending, but it quickly dissipated to a draw.

The second rapid game initially followed the Three-Knights Nimzo seen in their first classical game, but Mamedyarov was the first to vary going for g3 and Bg2, rather than the far more common e3 and Bd3 setup. Once the players were out of book, Mamedyarov managed to grab an edge with 18.Bg5 Nc5.

Allowing a rook to appear on d7 with 18...Bxg5 19.Rxd7 looks scary, but was probably the safer option.

After 19.Bxe7 Nxe4, 20.Rd7 would be met strongly by Rc2 from Black, but 20.f3 left White firmly in control of the d-file. Just a few moves later, however, Mamedyarov let his advantage wane.

25.Rd6 looks logical at first glance, menacing Bf6+, but it allowed Karjakin to drop the knight back with 25...Ne6 and once again threaten to invade on c2.

To keep some initiative, Mamedyarov decided to sac the exchange on e6, later winning it back to draw comfortably. Good defense of an unpleasant position from Karjakin forced the tiebreak on to blitz games. 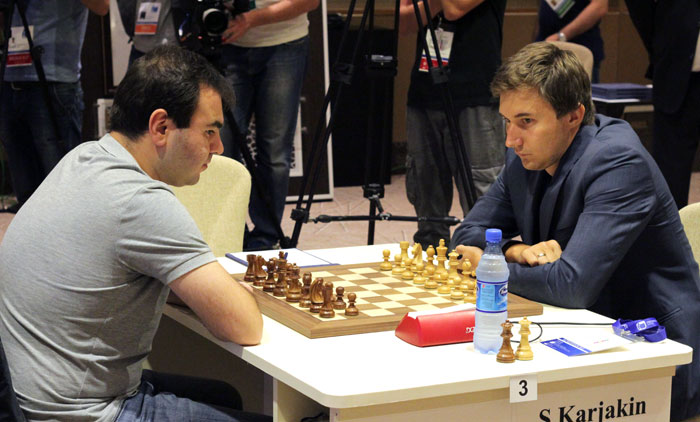 Time running out for Mamedyarov

Mamedyarov had missed his chances in the previous game and even more so in the first classical game of the match when he let Karjakin narrowly escape with a draw. After holding a draw himself on Thursday to force the tiebreak, Mamedyarov explained that going into that game he felt Karjakin had a psychological edge.

The situation repeated itself at the start of the third tiebreak game, but this time the Azerbaijan number one had a tough time.

Karjakin returned to 1.e4 and the Anti-Berlin with 4.d3, just as he had with White against Onischuk in their ten minute game nine days ago. White took a firm grip on the position with the maneuver 12.Bb3 and 13.Bb5 and did not let it go. Karjakin struggled to explain his opponent's sudden weakness.

Somehow my opponent played not very confidently, I don't know why...he got a pawn down and also he was very much down on time, but of course he had drawing chances.

Karjakin actually missed an opportunity to put the game away much earlier after 19...Bb4?

He went for the straightforward 20.Bxc6 Bxc6 21.Bxb4 Qxb4 and 22.Nxe5 with a clear pawn to the good. But actually 20.c5! would have exploited the awkward position of Black's knight on a4: 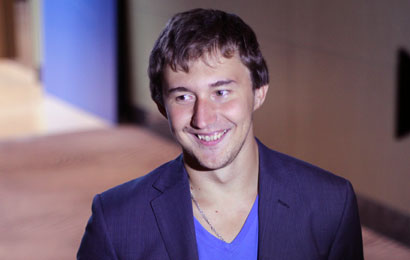 A win is a win, and two are even better | photo: Macauley Peterson

In a bad position, Mamedyarov even lost on time, and he couldn't recover in the must-win game that followed, so Karjakin moves on to face Pavel Eljanov on Sunday. 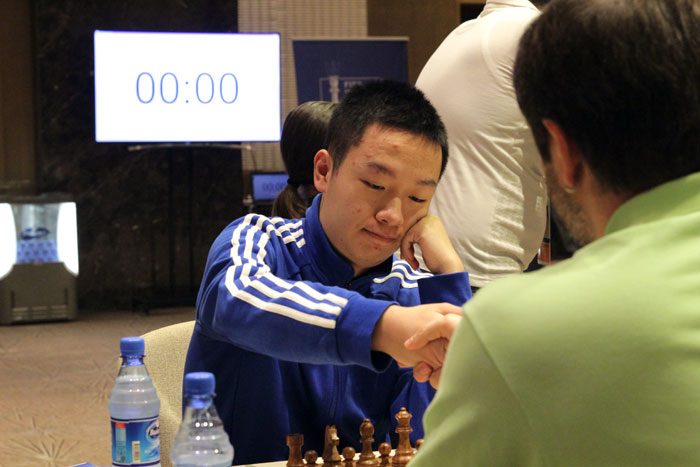 Svidler on the move

In some ways it's surprising that the other tiebreak match went as long as it did or was even necessary in the first place. Svidler let slip serious winning chances in several games throughout this match, which fortunately did not come back to haunt him. Hikaru Nakamura, who was eliminated yesterday, fired off this tweet before joining the live webcast with Evgeny Miroshnichenko and Dirk Jan ten Geuzendam.

He was quite critical of Svidler's play, and particularly of his offering a draw in the second rapid game when it looked as though Peter could try for a win without risk in the queen endgame. 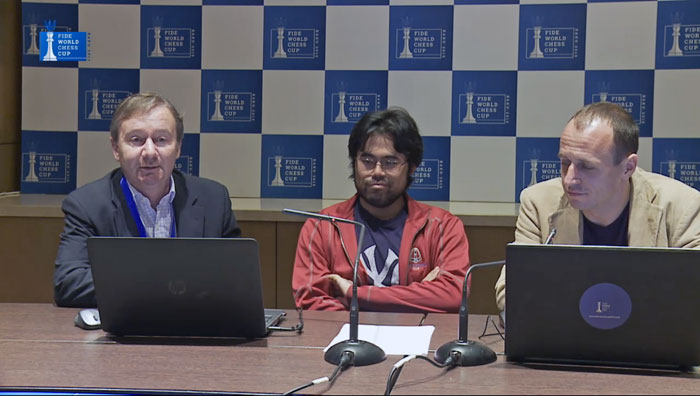 Nakamura noted he had nowhere else to be today, so why not kibitz a bit | screenshot: ChessCast

For a detailed look at the highlights from this quarterfinal tiebreak, we'll turn to GM Jan Gustafsson:

As the situation worsened for the Chinese prodigy, kudos to chess24 member eydlin who quipped on the live broadcast chat:

A reference to Wei Yi's impressive king hunt which, rather than "immortal", we dubbed the Game of the Century. And while Wei Yi may have proven he's fallible, his remarkable resilience here in Baku will be remembered for some time to come.

Svidler now will face Anish Giri, the only remaining member of the top ten at the start of this World Cup, as well as the sole representative from the elite Grand Chess Tour participants.